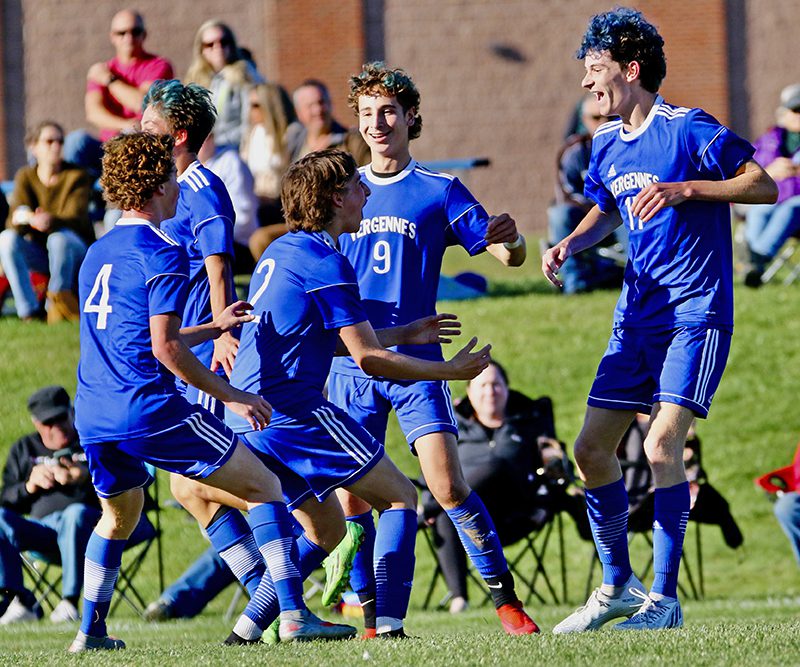 MEMBERS OF THE No. 1 VUHS boys’ soccer team celebrate their fourth goal in their 4-0 D-III quarterfinal win over No. 5 Green Mt. Union on Saturday. Shamus Rooney, right, scored this one and he was assisted by Jack Wyman, No. 2, center. Also in on the fun are Elijah Duprey (No. 9) and Parker Kayhart (No. 4). Independent photo/Steve James

“I think we have a good chance. We’re a well-rounded team. We want to win together, and I think this is our year.”
— VUHS midfielder Jack Wyman

VERGENNES — The Vergennes Union High School boys’ soccer team took its first postseason step toward what the Commodores hope will be a Division III title on Saturday. No. 1 VUHS took a 4-0 quarterfinal victory over No. 9 Green Mountain Union.

The Commodores did not have much trouble with the 7-8-1 Chieftains this past Saturday. VUHS earned advantages of 18-4 in shots at goal and 8-2 in corner kicks, statistics that fairly indicated the run of play. 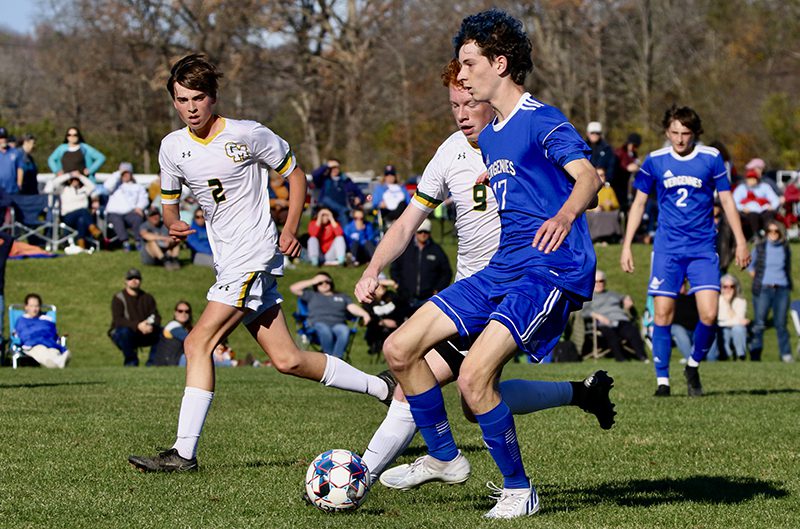 Still, it took a while for the Commodores to break down a GMU defense anchored by center back Eben Mosher, although senior forward Elijah Duprey and senior midfielders Jack Wyman and Shamus Rooney created early chances.

In the 17th minute, those three teamed up to give VUHS the lead. From right side Rooney sent a diagonal ball to Wyman, about 24 yards out from the right post. He relayed to Duprey cutting in toward the left post. Duprey took a touch into the box and hit a low, left-footed shot from about 15 yards out that pinged in off the right post. 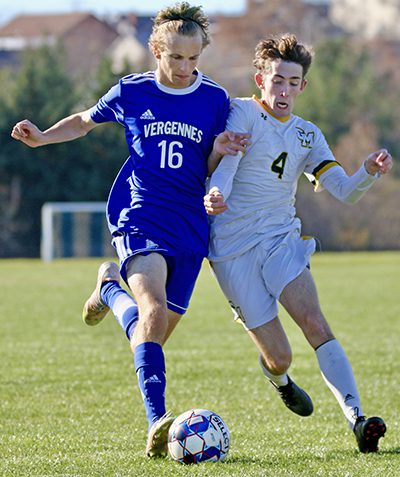 VUHS MIDFIELDER RYDER Messinger has a half step on Green Mountain’s Liam O’Brien as they battle for the ball during Saturday’s D-III quarterfinal, won by the No. 1 Commodores, 4-0.
Independent photo/Steve James

VUHS continued to dominate possession as Wyman, Rooney and the third center mid, Parker Kayhart, dictated play in the middle of the field, often involving defenders Oakley Francis, Gideon Palmer and Eli Brace with back passes to create space for the Commodores to operate.

“When we are able to control the ball in the middle, we’re able to play the way we want,” said Wyman, who finished with three assists. “When we just possess, play how we want throughout, all of the layers of the game, that’s how we win.”

Coach Kevin Hayes agreed the ability of the Commodores to possess was a pivotal factor on Saturday. Hayes said he was worried about a long layoff that came after a light late-season schedule and a first-round bye. But the Commodores used the extra practice time to hone their possession skills and tactics, he said.

“We worked on their triangle all this week,” Hayes said. “Moving the ball, and moving that triangle, and it worked well.”

GMU hung tough for a while. Goalie Forest Garvin came off his line to deny Duprey, and he saved a Spencer Grimm header on a corner kick in the 29th minute. The Chieftains’ first shot came in the 34th minute, when Austin Kubisek shot wide on a Liam O’Brien feed.

VUHS kept pressing, with 12 of their shots in the first half. In the final seconds Rooney launched a long-range blast that hit the crossbar and bounced into the air. VUHS middie Ethan Croke beat Garvin to the rebound and headed home a point-blank goal.

Rooney hit the crossbar again from long range early in the second half. If Hayes had a complaint it was that he would have liked to have seen the Commodores take more such shots. At times, he said, the Commodores passed up good chances in search of perfection.

“I thought we could have pulled the trigger more. When you’re getting those shots outside the box, take them and good things happen,” Hayes said. 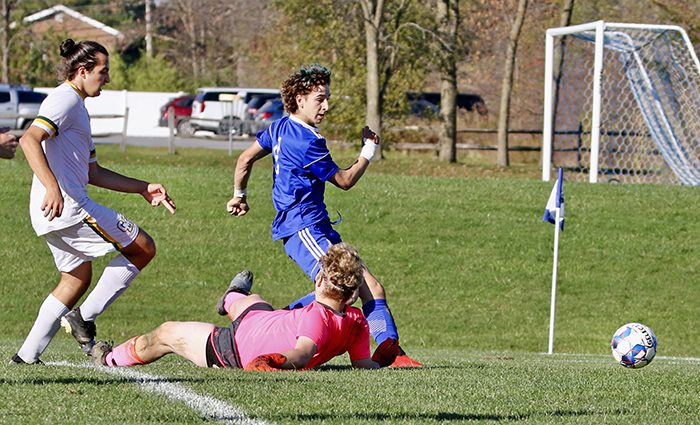 VUHS SENIOR STRIKER Elijah Duprey watches his left-footed shot head toward the goal to make it 3-0 during the No. 1 Commodores’ 4-0 D-III quarterfinal win on Saturday over No. 3 Green Mt. Union.
Independent photo/Steve James

VUHS did score two more goals that approached perfection. At 19:40 Wyman threaded a pass to Duprey cutting again into the left side of the box. This time Garvin came out aggressively, but Duprey touched the ball around the goalie and tapped the ball home.

A minute later the Commodores submitted a goal-of-the-year candidate. On a free kick from midfield Oakley Francis rolled the ball to Wyman running down the right sideline. Wyman took one touch and lofted a pinpoint serve to Rooney about eight yards out from the left post. Rooney volleyed the ball out of mid-air, drilling it back inside the right post to make it 4-0.

The Chieftains kept battling, and Palmer did well to break up a Kubisek and O’Brien rush into the box shortly after that strike. With 14 minutes to go goalie Abram Francis went high to snare a dangerous Ben Munukka free kick. Francis finished with two saves, while Garvin made five. 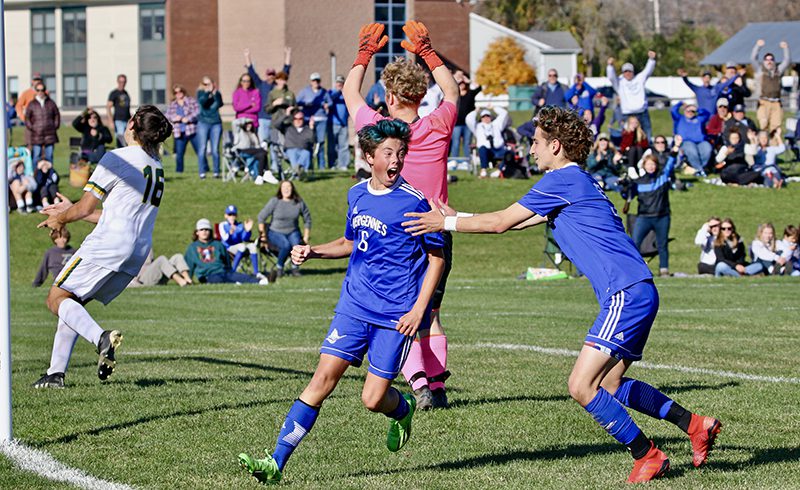 Wyman said it would be important for the Commodores to “just play our game” moving forward, and their tough D-II schedule has gotten them ready for the D-III postseason.

“The farther we go, obviously, the better the teams we’ll play,” Wyman said. “I think we have a good chance. We’re a well-rounded team. We want to win together, and I think this is our year.”

Given the solid defensive work and the team’s offensive ability, Hayes believes the Commodores have the capability to advance further.

“If we continue to work on what we’re working on, which is to win the midfield and move the ball like we can, we’re going to score goals,” Hayes said. “So I’m very hopeful.”