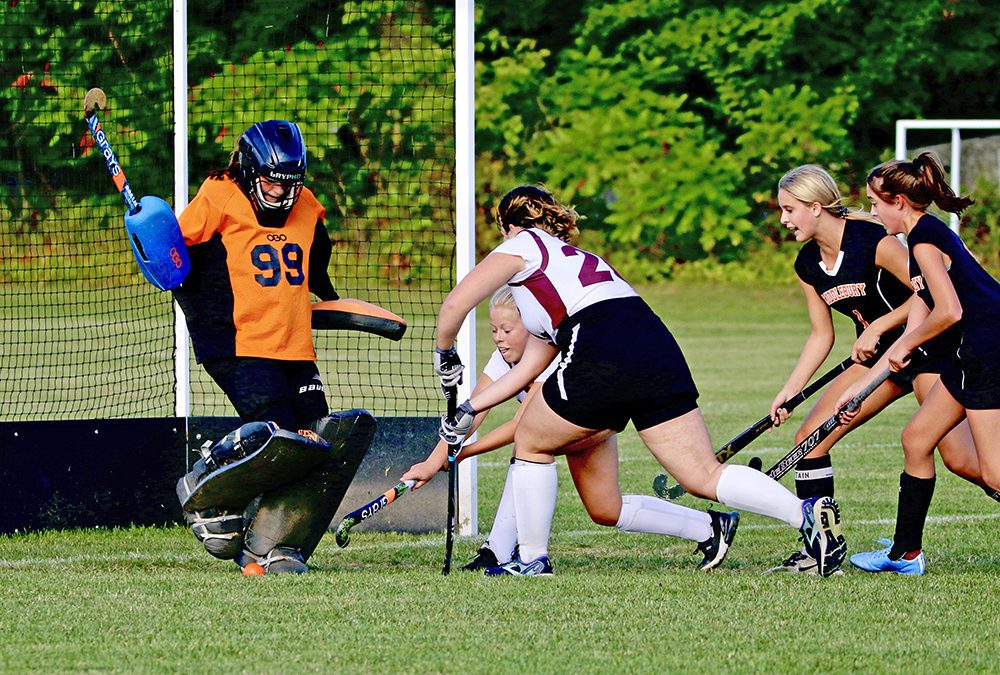 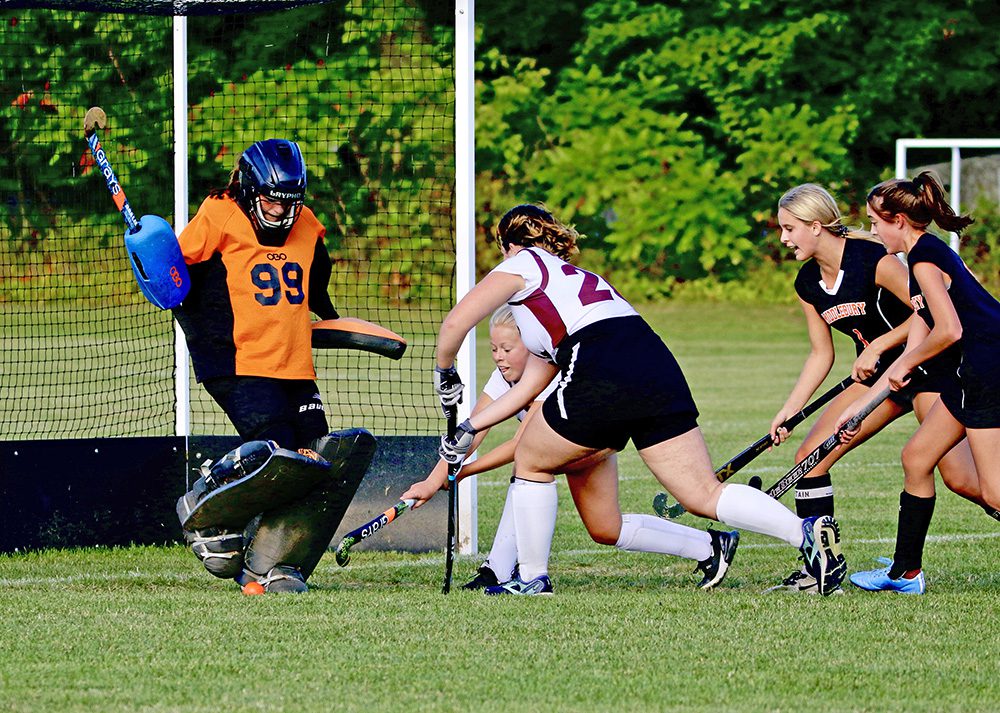 BRISTOL — The Mount Abraham Union High School field hockey team kept up its early-season winning ways this past Friday, this time picking up a 5-1 victory over visiting Middlebury.

Four Eagles scored, led by sophomore Paden Lathrop with a pair of goals. Mount Abe moved to 3-1-1.  Although the Tigers pressed in the fourth quarter, the Eagles held them to one shot on goal.

That one went in, a crisp second-quarter finish by freshman Kenyon Connors set up by senior Hana Doria. The Tiger defense also managed to limit the Eagles to nine shots on goal despite constant pressure through the first three quarters, but it was not enough to stop the team from dropping to 0-5. 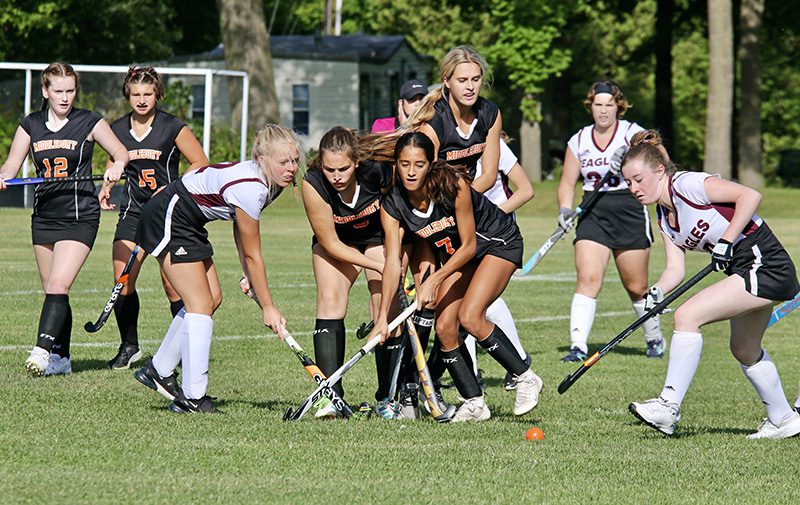 EAGLE JUNIOR MIDDIE Sarah Heath is first to this loose ball and gets ready to make a play in front of a knot of teammates and Tigers during the Mount Abe field hockey team’s 5-1 victory over visiting MUHS this past Friday.
Independent photo/Steve James

Both coaches found positives. Eagle Coach Jen Myers said her team continues to bounce back with better intensity for 60 minutes after a disappointing home loss to Rice the previous Saturday.

She said the Eagles had shown good effort in a 0-0 tie vs. Burlington two days before, and on Friday they added stronger finishing into the mix, with better positioning as well as focus.

“This week we’ve really been focusing a lot on our energy, and coming with good, positive, strong, encouraging energy,” Myers said. “And we had that on Wednesday (vs. BHS), we just didn’t have the finish. So today it was finding a way to finish, and the grit of not giving up in the circle until we find a way to finish. So it was fun to see when it all comes together like that.” 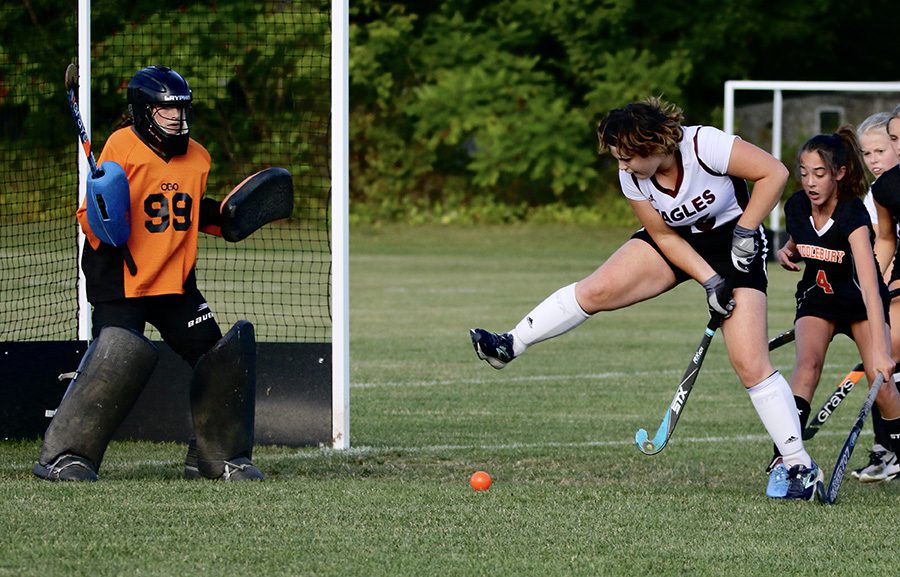 EAGLE SENIOR FORWARD Olivia Campbell acrobatically dodges a teammate’s shot to allow it to continue toward the Tiger goal during her team’s 5-1 home win on this past Friday.
Independent photo/Steve James

The strength of her defense, led by seniors Payton Vincent and Natalie Adams, has contributed to the improvement of a young front line, Myers said, by challenging them in practice.

“We’re all dangerous in the circle when we get in there, which is exciting,” she said. “The practice field is helping game play.” 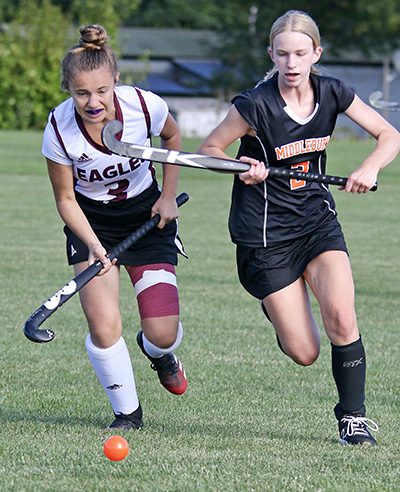 TIGER IRELAND HANLEY, right, has a slight lead over Mount Abe’s Hailee Allen in this race for a loose ball during the Eagles’ 5-1 home victory this past Friday.
Independent photo/Steve James

She said the team is learning the competitiveness and strategy needed to compete at the varsity level, and was pleased with those elements on Friday, especially in the late going, and in a competitive Wednesday loss at Rice.

“I think there’s been a lot of progress. The last game we had, Rice, I think that was the game where everything clicked,” Whittemore said. “Since then the intensity has been a lot better. We’re now understanding how to use the width of the field, and the utilize that back pass as well. So I have seen a lot of growth.”

The Eagles are also young, but unlike the Tigers have six veterans to build around: all-state senior center middie Madi Gile, center forward Olivia Campbell, the two senior defenders (Vincent and Adams), and junior middies Morgan Barnard and Sarah Heath, valuable role players a year ago who now start.

All played major roles as the Eagles controlled play from the start on Friday. Sophomore Lily Case scored the first goal in the fifth minute of the first quarter, one-timing a feed from the right from Gile, who had taken a pass from Campbell.

Lathrop made it 2-0 with 1:48 left in the period on the fourth Eagle penalty corner: She banged Campbell’s pass from the right inside the near post. The Tigers had one late rush, but Barnard broke up Doria.

The Tigers got back in the game at 13:16 of the second quarter. Doria led another surge and drew a foul, and from outside the center of the Eagle circle her effort on the restart found Connors off the left post. Connors quickly found the far corner.

The Eagles surged after that score and earned four penalty corners over the next eight minutes, scoring on the fourth after Tiger goalie Michaela Charbonneau made a nice save on a Campbell tip on the third. Gile did the work herself, dribbling past a defender and whacking a drive past the stroke line and into the lower left corner to make it 3-1.

The Tigers attacked briefly late in the period and earned a penalty corner, but the Eagles broke it up.

In the quarter’s fifth minute Campbell redirected freshman Maris LaPerle’s drive from the left side inside the left post, and three minutes later Lathrop rapped a Gile feed home into the same spot. 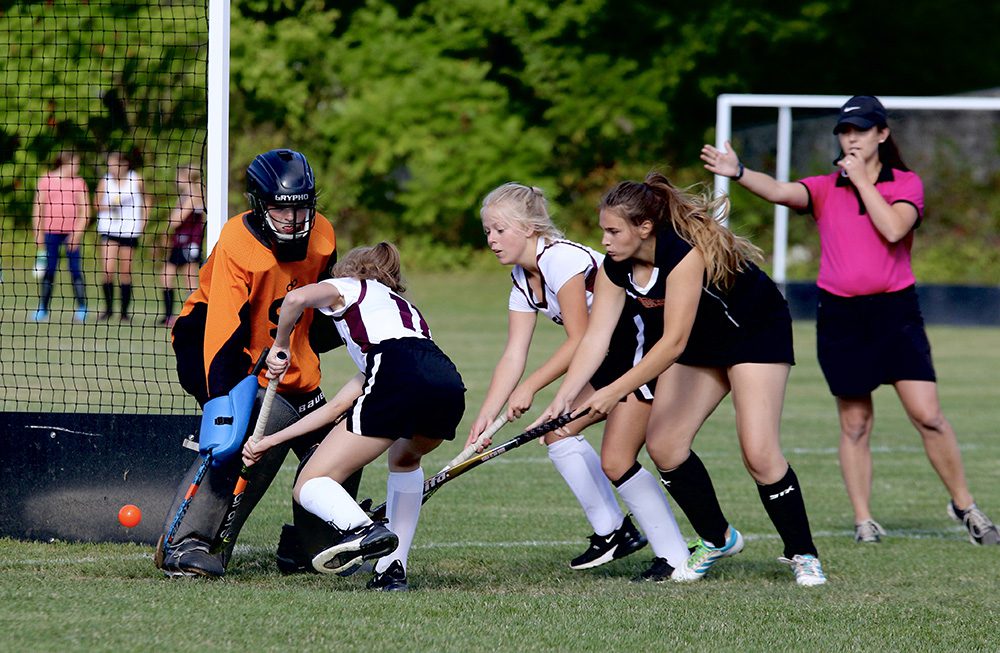 EAGLE SOPHOMORE FORWARD Lily Case one-times home her team’s first goal of the game vs. visiting MUHS on this past Friday. Case was one of four Eagles who scored in their 5-1 victory.
Independent photo/Steve James

The Tigers kept plugging. Freshman Quinn Doria and Connors led rushes early in the fourth quarter, and MUHS earned three restarts deep in the Eagle end and two penalty corners in the period. But the Eagle defense was up to the task, and the game ended at 5-1.

“The pieces are coming together. I think that was a good team effort,” she said.

The four-time defending Division II champion Eagles have higher aspirations, but Myers said for now she is also mostly looking for, and seeing, growth from her team.

“It’s definitely all-around improvement from our whole group,” she said. “It’s game five, and it’s exactly how I envisioned us getting better and pushing ourselves to get better.” 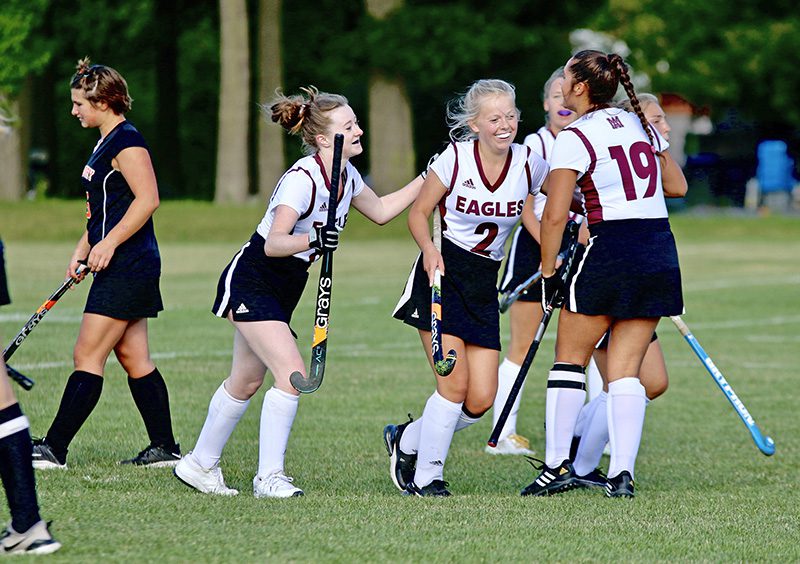 MT. ABE SOPHOMORE forward Paden Lathrop is all smiles with teammates Sarah Heath, left, and Madi Giles as Lathrop celebrates one of her two goals on Friday vs. visiting MUHS.
Independent photo/Steve James