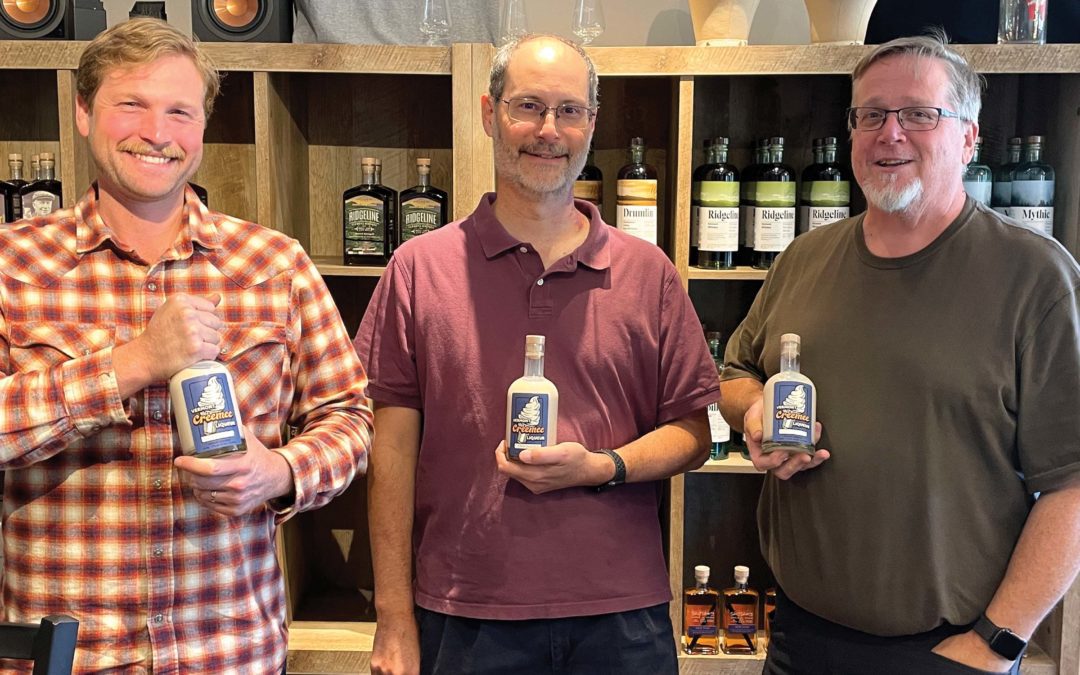 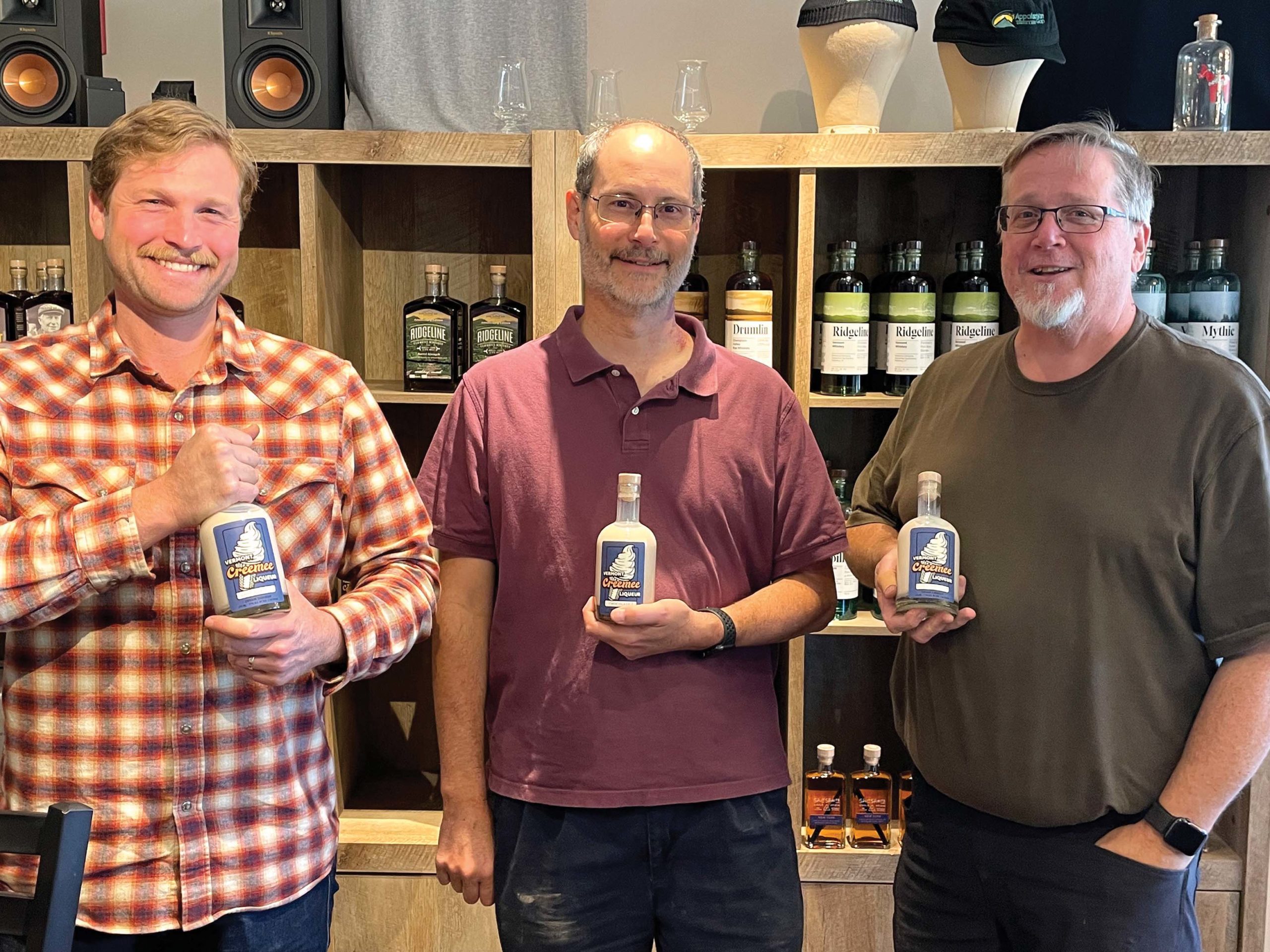 MIDDLEBURY — The creemee stands with sugar-on-snow in the pantheon of quintessential Vermont treats.

It’s that sinfully delicious amalgam of cream, corn syrup, milk, sugar and flavorings that so many of us enjoy on a hot summer day in a cone or cup.

Oh, and don’t hold back on the butterfat.

Any photo album of a visit to the Green Mountain State is incomplete without a shot of a young, creemee-drenched child gleefully devouring their way to the bottom of a soggy cone.

Get ready for another creemee that’s decidedly geared toward the adult tastebuds. In fact, be prepared to be carded in order to buy one.

It’s called Vermont Creemee Liqueur, brought to you by the young-at-heart stewards of Middlebury’s Appalachian Gap Distillery. The trio of Lars Hubbard, Chuck Burkins and Will Drucker have devised the 34-proof beverage for those yearning for a sweet taste of summer — with a little bit of a punch.

“The intent was to come up with something that was a truly a Vermont flavor that people would recognize,” said Hubbard, App Gap’s president and head distiller. “The idea was to make a liqueur that tastes like a melted creemee.”

They believe they’ve succeeded. The all-natural Vermont Creemee Liqueur is currently available in the traditional vanilla, chocolate and maple flavors, with additional varieties on the drawing board.

“If we’d only figured out a way to make a ‘twist,’” Hubbard said of the ubiquitous vanilla-chocolate creemee combo.

Hubbard’s approach to the creemee liqueur was the same as that employed in making the many other spirits in App Gap’s portfolio.

“I start out with a base recipe that’s based on experience and guesswork,” he said. “Then I tinker with it.”

It took five tries to get the chocolate variation right. Hubbard said he nailed both the maple and vanilla in one try.

And that’s a great track record for a cream-based liqueur, which includes the added wrinkle of mixing dairy with spirits (in this case, whisky). It’s critical to achieve a PH balance in the product that will prevent clotting.

Instead of using a conventional chocolate flavoring, the App Gap crew infuses its whiskey with cocoa nibs. They use vanilla paste instead of vanilla extract. And for the maple variety, they procured grade B syrup from Breezy Lane Sugarworks in Bristol.

“What we were trying to do is not have an overwhelming flavor; the flavors in creemees are never super-dominant — except maybe black raspberry,” Hubbard said. “The others (flavors) are subtle, and that’s what we were going for.”

Plans called for a 2020 roll-out of Vermont Creemee Liqueur at farmers markets. But then COVID put a temporary clamp on public gatherings.

So the creemee liqueur idea was left to age at App Gap — until the pandemic subsided.

Vermont Creemee Liqueur’s grand unveiling occurred at App Gap on Sept. 2, but the product had already been unfurled, on a small scale, throughout the summer at farmers markets in Burlington, Winooski, Rutland, Ludlow, Londonderry, Dorset and Manchester. A 375ml bottle was going for $20.

It’s not yet available through Vermont liquor stores; App Gap officials will continue to monitor how their creemee concoction is received on a lesser scale before deciding on a bigger plunge that would require ramping up production. If you live in the area and want the creemee liqueur, you’ll have to special order it through App Gap or stop by the distillery’s tasting room at 88 Mainelli Road.

“A product like the Creemee Liqueur is definitely more of a ‘mad scientist’ undertaking,” he said.

But that’s OK; sometimes it’s good to go against the grain.

“When we were bandying about the idea, it was to do something that was fun and rooted in Vermont,” he said.

Another one of App Gap’s popular products gave the crew added confidence to delve into the uncharted territory of a high-octane creemee creation.

“We’ve been making espresso liqueur for a long time and have die-hard fans of that,” Drucker said. “We figured we had a sub-set of customers who love the liqueur side of things. And what could be more Vermont than a liqueur inspired by a Vermont creemee?”

Burkins, Drucker and Hubbard all love the product and joked about its diverse applications.

“We’re not encouraging this as a breakfast drink,” Burkins retorted playfully.

Being the first company to produce a Vermont Creemee Liqueur isn’t the only feather in App Gap’s cap. Last year, the company became the country’s first climate-neutral certified distillery.

“Environmental responsibility has always been a big part of what we do,” Drucker said. “We want to make sure our products are extremely delicious but also made in a way that’s gentle on the earth and reflects the values our fellow Vermonters care about.”