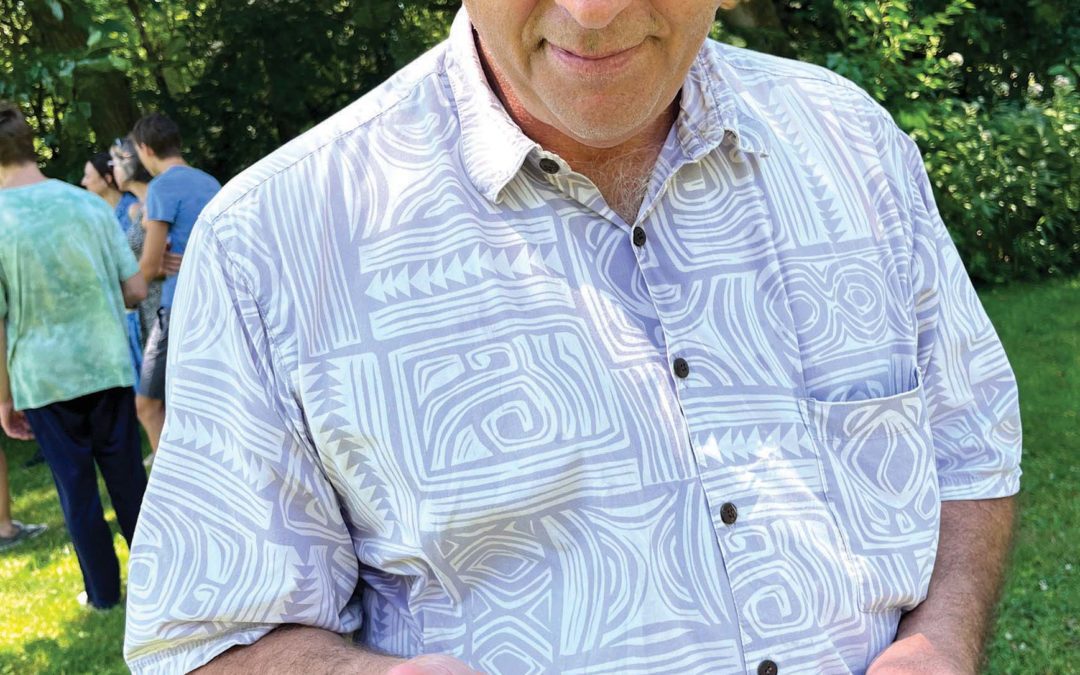 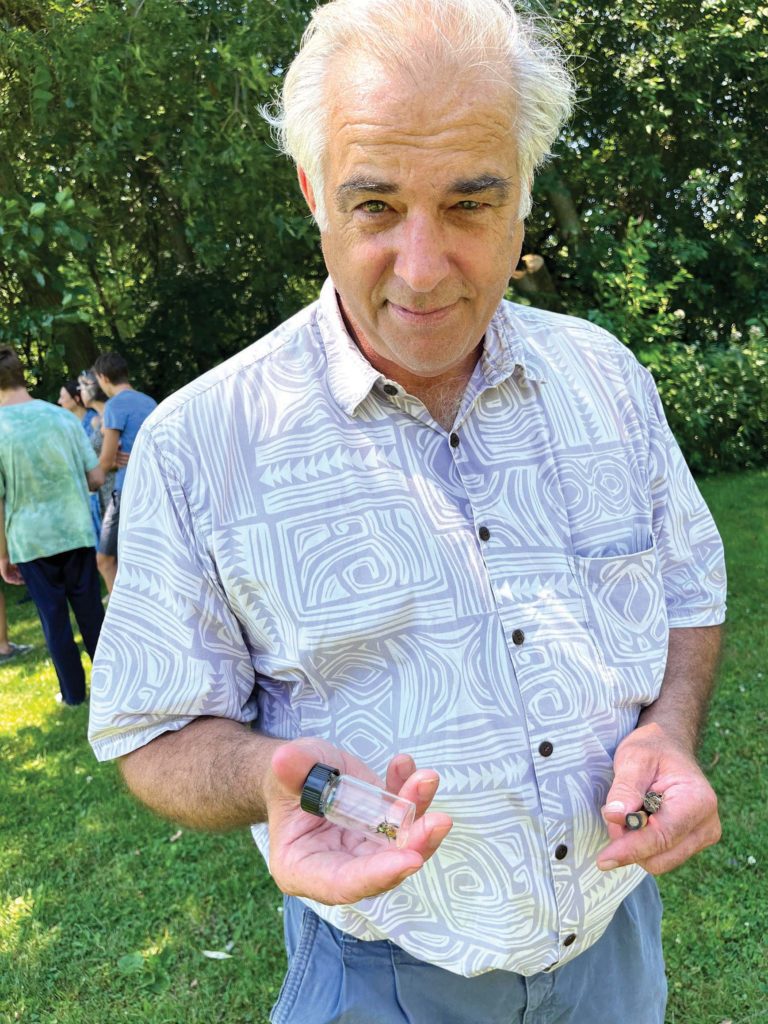 AFTER WORKING AN overnight shift Friday as a physician at the Porter Hospital Emergency Room, Mike Kiernan, co-founder of Bee the Change along with his wife, Tawnya, collected two bees to bring along to Saturday’s event in Vergennes Falls Park. Here he shows off one of the bees.
Independent photo/Katie Futterman

VERGENNES — You may have thought about offsetting your carbon footprint, but have you ever considered your pollinator footprint? Bee the Change, a Vermont-based organization dedicated to increasing biodiversity through pollination, is asking Vermont businesses, schools and community members to do just that by repurposing fields of solar panels and other spaces into designated pollinator habitats.

The goal of Bee the Change’s “Our Town Pollinator Project,” launched last month, is for every town in Vermont to eventually have one of these habitats.

This past Saturday, Vergennes celebrated being the first city to do so, by unveiling a half-acre habitat for pollinators in the city’s Falls Park.

“Vergennes has been one of the most welcoming towns to come into,” said Patrick Kitchen, who works for Bee the Change and contacts businesses about offsetting their footprint. “Even when I go into a business and they’re busy and they really don’t have time for me to talk to them, they still let me come in and do my little spiel for them.”

Bee the Change asks business owners to pay 11 cents per square foot of their business in order to fund a pollinator habitat equivalent in size elsewhere in Vermont.

In addition to local business owners, city officials were an essential part of getting the pollinator habitat completed.

When Vergennes Recreation Department park coordinator Erin Wolcott received an email proposing the project from Bee the Change co-founder Mike Kiernan, she knew there was a lot of park space in Vergennes. So she worked with her colleagues for about a year to determine the best spot for the habitat.

That spot ended up being a serene, waterside expanse for native pollinators. It took about a week’s worth of work, over time and with various steps, by Paul and Flurine Seiler, who tilled the land in May and transformed it from a grassy field. This transformation is key to increasing biodiversity. 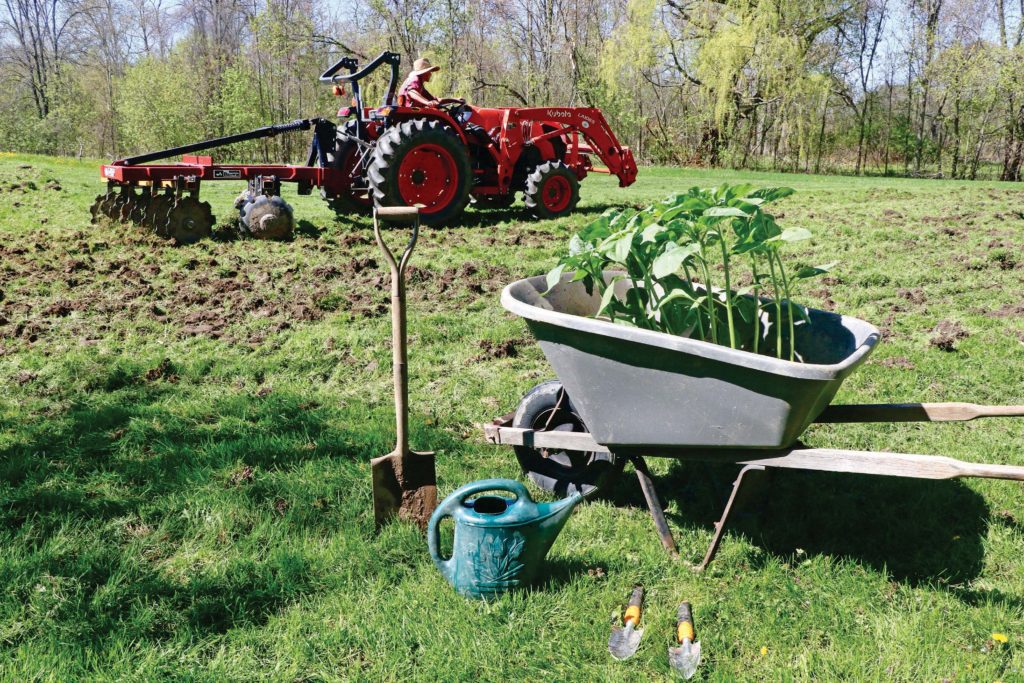 CORNWALL FARMER PAUL Seiler runs a disc harrow through land at Vergennes Falls Park in May to begin the process of creating a pollinator habitat there. A few sunflowers wait to be planted at the margins of the area.
Independent photo/Steve James

Kiernan spoke to the celebrants at the July 23 grand opening of the habitat about the importance of creating these spaces for pollinators. Although 25 years ago the region had all 17 species of bumblebees native to Vermont, Kiernan told them, today there are only 10, seven of which are endangered. He cited a conclusion made by the UN Agency for Climate Change and UN Agency for Biodiversity last year, in which they stated that two major crises affecting life on earth are climate change and the accelerating rate of biodiversity loss.

He led the group on a tour around the habitat, occasionally pulling out a bee to show the group. The bee buzzed inside a plastic container in his pocket until he eventually released it into the world. 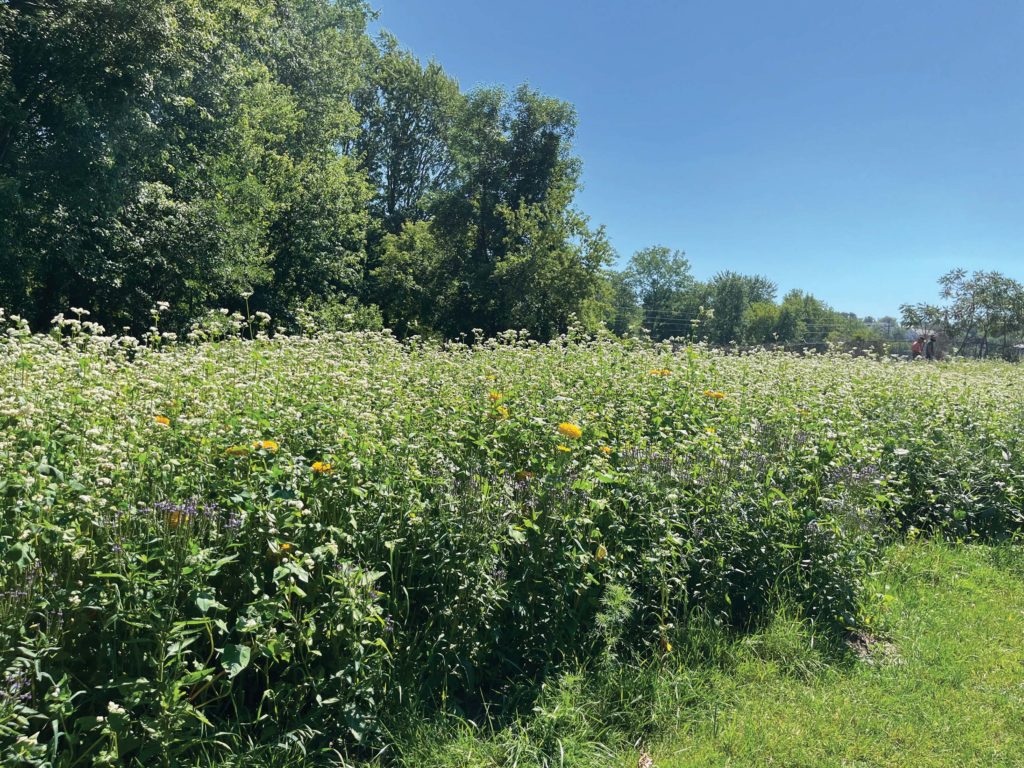 A HALF-ACRE OF pollinator habitat grows in Vergennes Falls Park, thanks to Bee the Change’s work with local donors and officials.
Independent photo/Katie Futterman

Attendees of the celebration then gathered around a table, which offered drinks and snacks, as town officials expressed their gratitude and excitement about the new habitat.

Sue Rakowski, who sits on the city council, said, “I am very proud that Vergennes has embraced this, and has brought people together to make something that’s not only beautiful, but is important for not only pollinators, but also our world.” 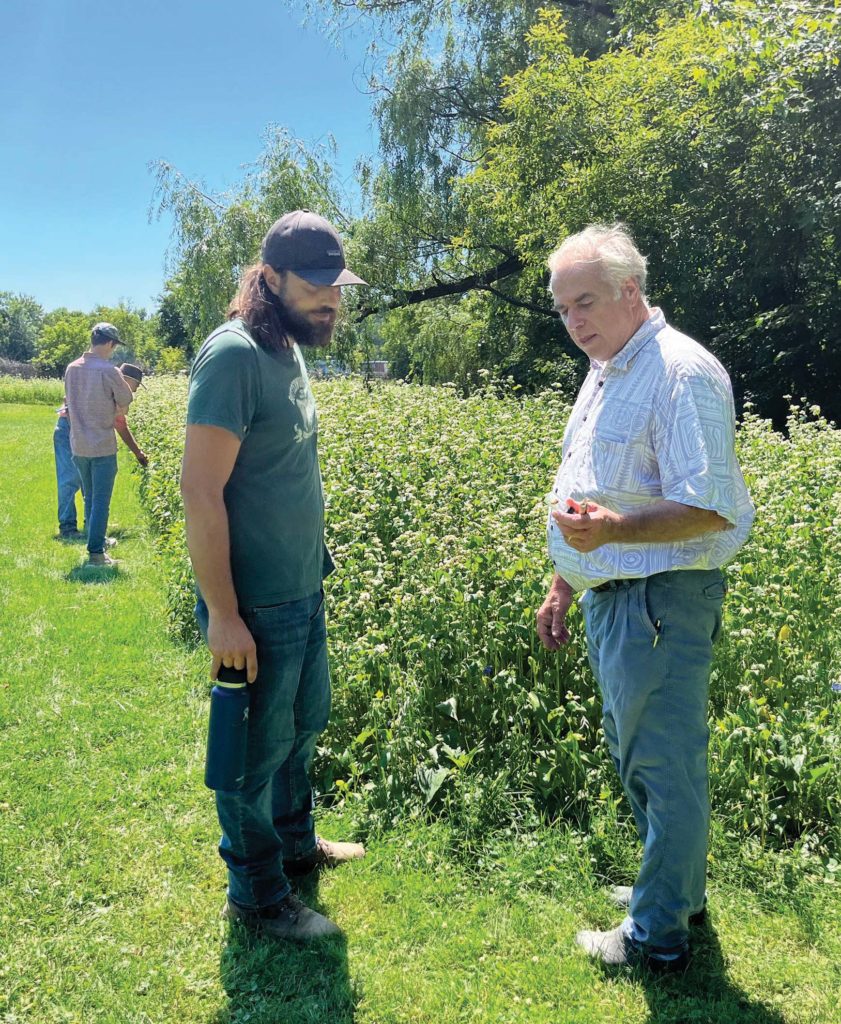 Ron Redmond, city manager of Vergennes, thanked everyone for their hard work.

“I’m really struck by how important it is to have urban guerillas and instigators and leaders, and so much of what we do here in Vergennes, it’s only gonna happen because people like Erin step up, and behind the scenes, it’s happening all the time. And that’s what I love about working here,” he said.

Redmond was eager to continue with the project and look for more spots for pollinators in the future. He added that the city will supplement the new garden with educational materials around the habitat, including a statement on the city’s website about Bee the Change’s pollinator project.

Vergennes may be the first, but it is not the only town working to offset its pollinator footprint. Mooretown and Waitsfield both have smaller gardens for pollinators next to their elementary schools. Bee the Change had planting parties in which they gave the kids Dixie cups of seeds to plant. Bristol, Marshfield, Waterbury and Londonderry have also begun the process, and about 15 other towns will begin creating their own habitats later this summer and in the fall.

At Shelburne Museum, there is a pollinator art art sculture exhibit by artist Nancy Winship Milliken, with a flowering habit around four of her sculptures. In the future, Bee the Change is looking to encourage more businesses to donate and more towns to pollinate.