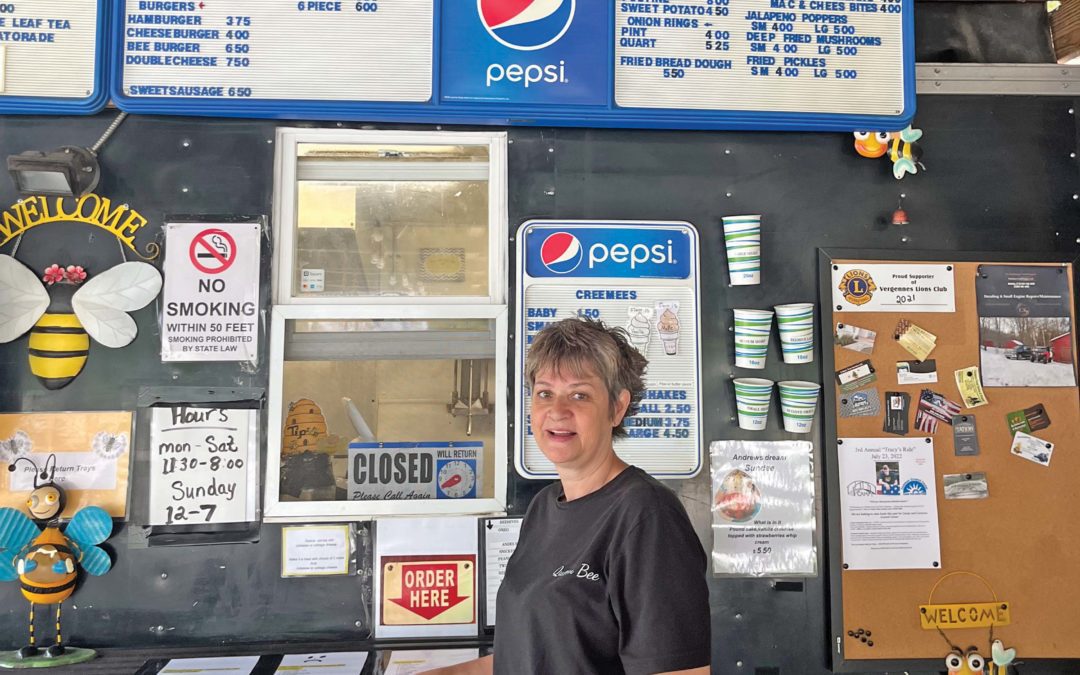 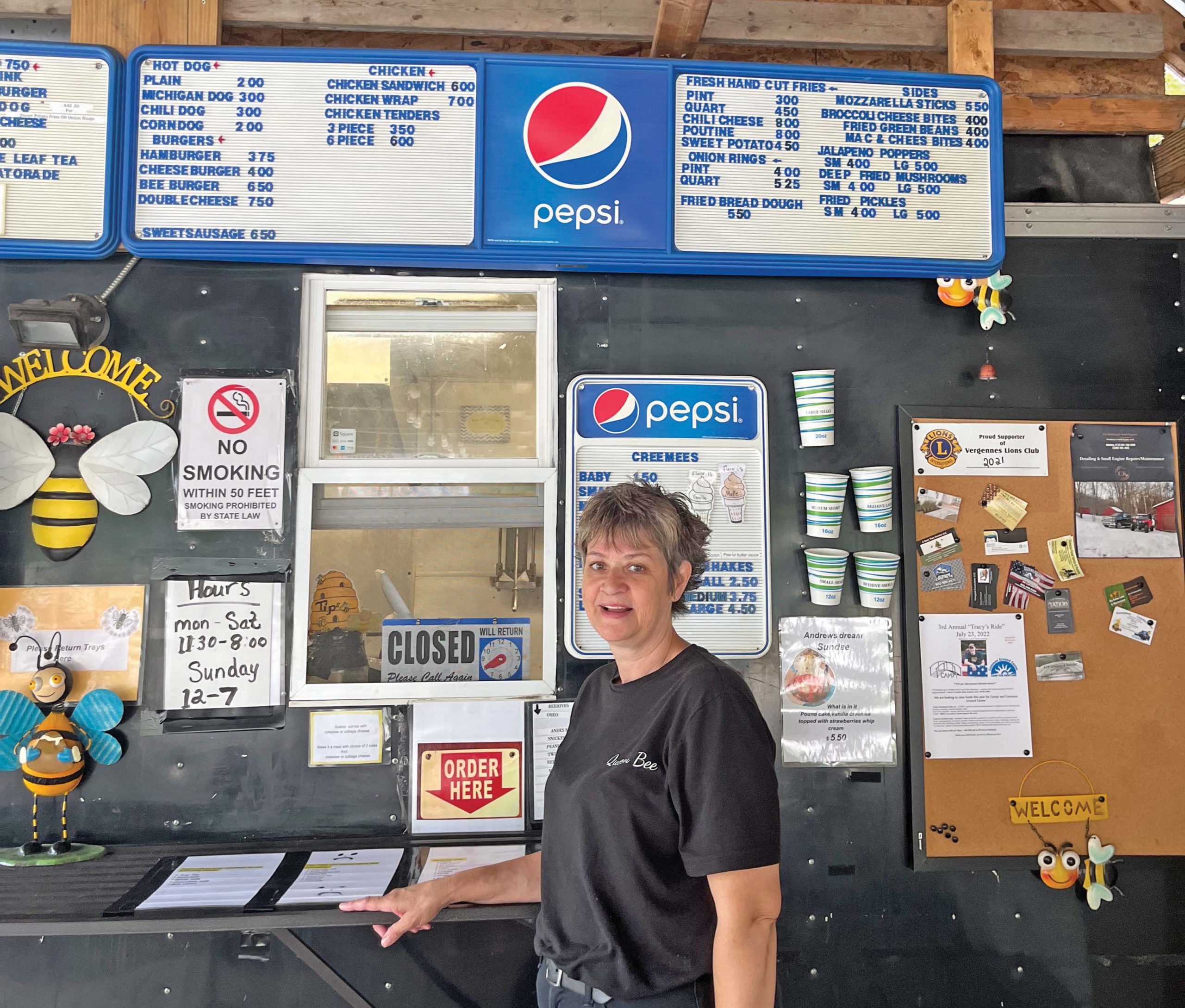 MONKTON – For years, neighbors would come by Kim Jewell’s Monkton house and ask, “What are you cooking up this weekend, Kim?”

She had developed a reputation of barbecuing for them every weekend, with menus including everything from new burger experiments to desserts.

Then on Jewell’s 40th birthday, her family bought her an eight-by-eight red truck with “Queen Bee” written across it.

“Mom,” her daughter Melissa told her, “you’re now going to make money off all these people you’ve always cooked for.”

In 2015, Jewell opened up Queen Bee’s Snack Bar as a truck next to her house on Hardscrabble Road, a Monkton byway, serving about 15 to 20 people a day.

But the back road site didn’t stop Queen Bee from growing. With the power of word of mouth alone, Queen Bee became an essential seasonal neighborhood spot. This past Sunday, July 17, she served 173 people, and that doesn’t count those who just stopped for ice cream and creemees.

“It’s just gone big, big, big now. Bigger than I ever once dreamed, that’s for sure,” she said.

In those numbers are 350 pounds of potatoes, mostly for her specialty, hand-cut fries. All thanks to her neighbor, of course, who rescued her from individually peeling them and cutting them, and told her about a potato cutter she had just ordered.

“I see potatoes in my sleep, I swear,” joked Jewell.

Why Queen Bee? In addition to her two adult, biological children, Melissa and Christopher, Kim and her husband Glenn have fostered 23 children during the past 18 years.

A neighbor dubbed Jewell “Queen Bee” for her work advocating for these kids in schools.

“I’ve earned the Queen Bee name. I don’t let anybody walk all over myself or any of my kids or any of the kiddos that I’ve ever taken care of,” she said.

Fostering, of course, is no easy task, and it’s difficult to hold a full-time job while taking care of children. Jewell used to work as a custodian at Middlebury College, until she collapsed about 15 years ago while cleaning a staircase, and after testing, was diagnosed with Sarcoidosis.

The disease, an overgrowth of inflammatory cells in parts of the body, primarily affects Jewell’s lungs, and she was told she could never work full-time again.

Jewell laughed at that, and luckily, she hasn’t needed her prescribed steroid medication for two years.

Hours are flexible. Running Queen Bee’s allows Jewell to go to doctor’s appointments and school meetings by putting a sign up saying that she is out and will come back in an hour. Family is essential to creating this flexibility. The shop needs about two people at lunch, and three to four for dinner. Jewell has had the help of her husband, children, daughter-in-law, cousins and nieces.

And the loyal customers are willing to wait, anyway. The dedication of the customers is evidenced by the many notes, cards and “Queen Bee” mugs gifted to her, which lie inside the trailer. One such loyal customer parks his pickup truck at the same tree five days a week, unpacking his own portable table and covering it in a tablecloth for his wife and him. 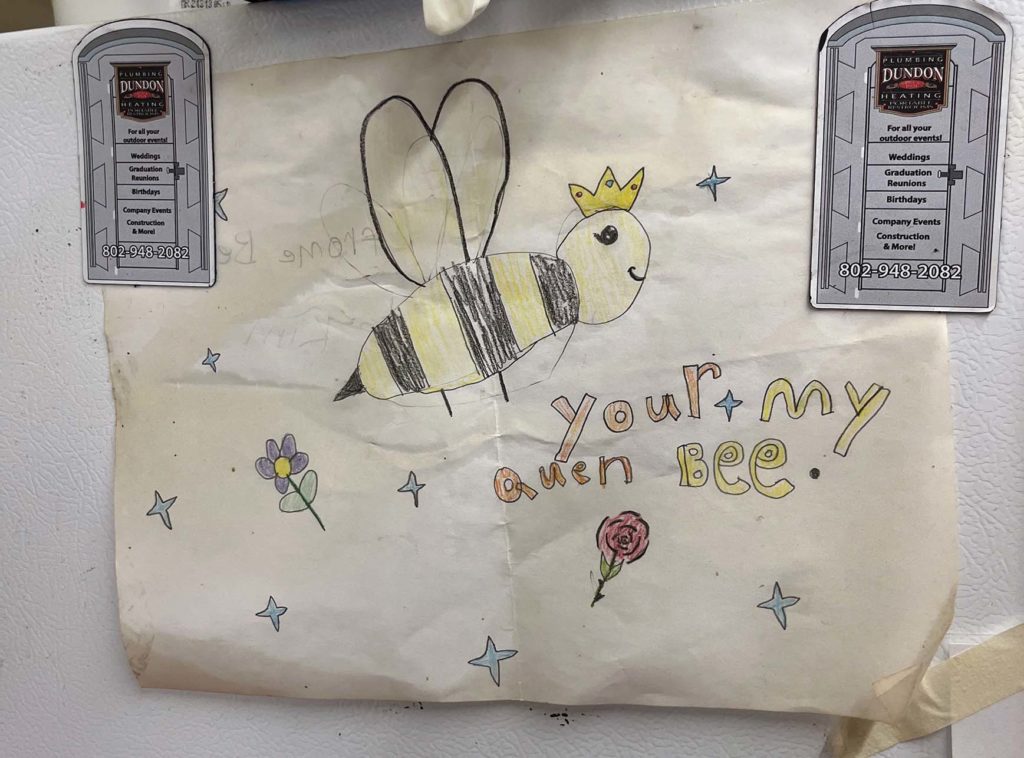 ONE OF THE many notes of appreciation Kim Jewell has received. Photo by Katie Futterman

Jewell worked out of the little red truck for the first three years, and eventually used saved-up tips to purchase a 10-by-24-foot trailer. Although it was empty when she got it, her family fixed it up with everything it needs, including a potato cutter, and brand new 36-inch grill, which Jewell boasted can cook 65 burgers at once.

Over the years, Jewell has also added an ice cream shop (where the air conditioning provides the only cool solace, next to the 94-degree kitchen trailer). They have also switched out their original canopy, which would blow in the wind, for a pavilion.

Inside her trailer is a chair for 6-year-old Akara, who Jewell has taken care of since she was just six weeks old, and would sit on Jewell’s back in a backpack while she worked.

“This is her life, the snack bar,” said Jewell.

Now, Akara is in charge of putting the stickers on the creemee punch cards, which allow people a free creemee after paying for nine. They’ve gone through 450 so far.

Jewell also partnered with the Bristol Police and Addison County Sheriff’s departments in a “cones for cops” program, in which the police gave cards to children who they saw doing something good for the community, and the kids would bring it for a free creemee. All of those kids’ names were also placed in a raffle, and one wins a prize at the end. 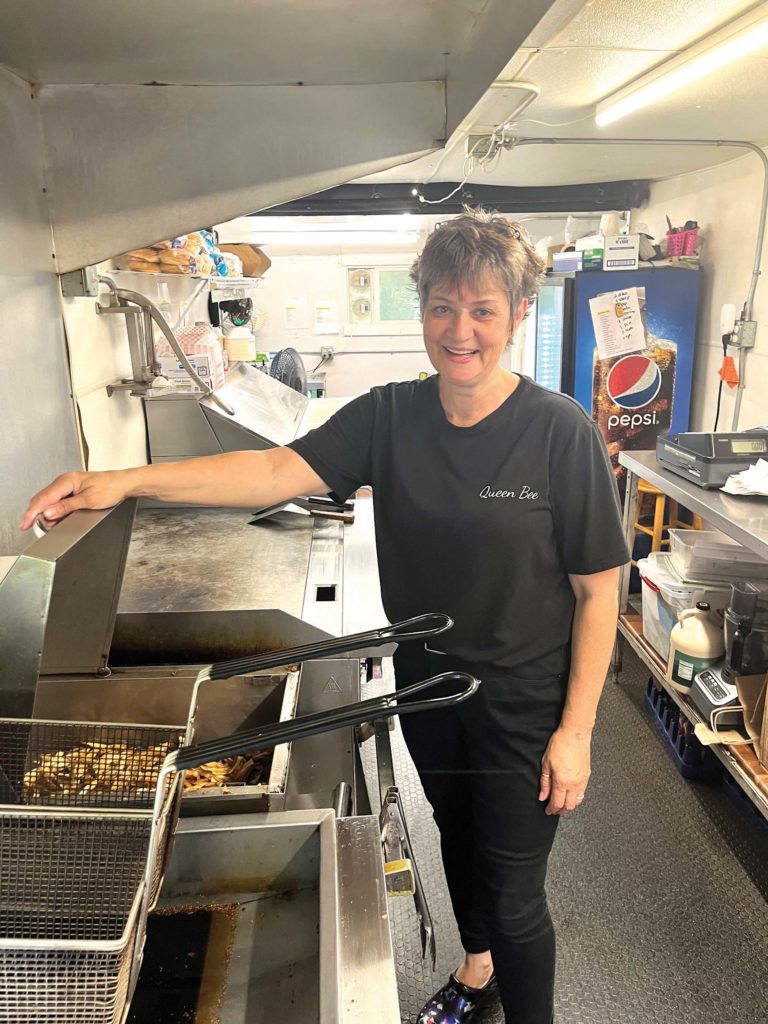 KIM JEWELL WORKS at her snack bar off the beaten track in Monkton where she recently served more than 170 customers in a day, not counting those who just came for creemees. That same day, last Sunday, she went through 350 pounds of potatoes, making her “locally famous” hand-cut fries.
Independent photo/Katie Futterman

“I always like to do something special for the kids,” said Jewell.

Jewell has games set up for the kids so they don’t get restless while waiting for their food. She plans to use her uncle’s tractor to help build a slide and a more complete playset for older children.

Also on her 8 acres of property sits a wheelchair accessible treehouse, which the family built for their foster child Andrew, who died in February due to complications after Covid-19.

Andrew and Glenn’s favorite show together had been Treehouse Masters, and Andrew would often hang out in the treehouse. Now, many people ask to rent out the space for meetings, and Jewell allows them to meet there, as long as they buy lunch first.

That, like all of Queen Bee’s food, must meet Jewell’s standards.

“It has to look good to me before that goes out the window. And everybody knows my standards. When you make a burger, you have the burger on the bottom, and the veggies on top. And it better look like that when it goes out the window,” she said. “I want it to look like something I would see in a restaurant.”

In fact, Jewell hopes that in the future, she can work with the town so she can establish a year-round restaurant. Currently, she’s open about six months a year, closing when the water freezes in the fall, and opening when it thaws enough in the spring.

No matter what happens, though, Jewell will continue operating Queen Bee’s.