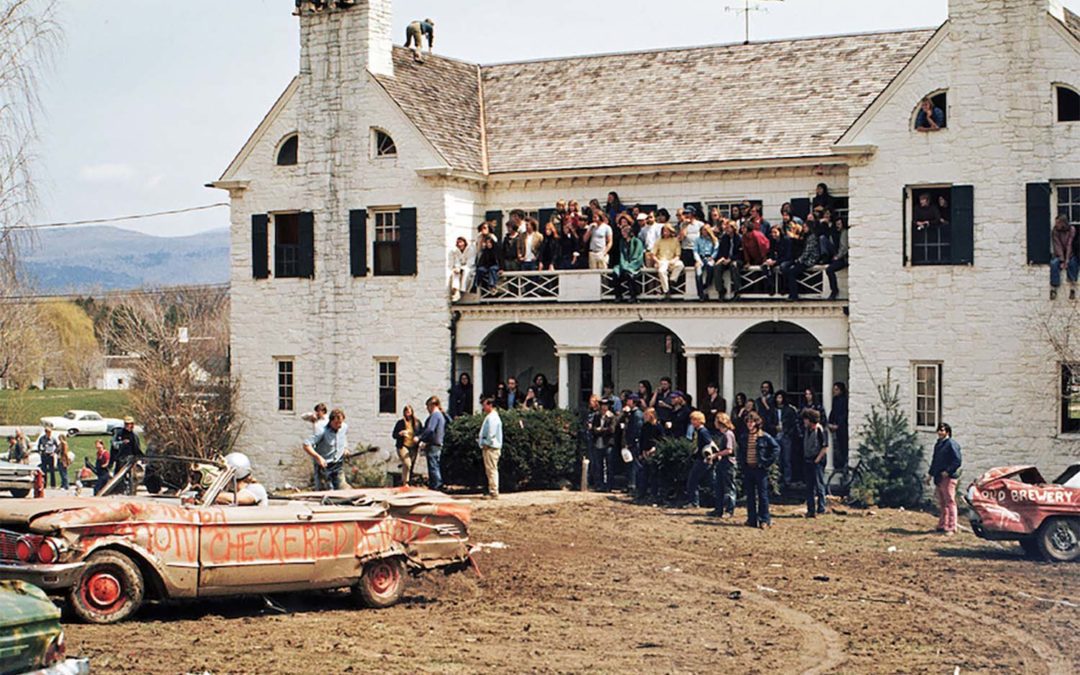 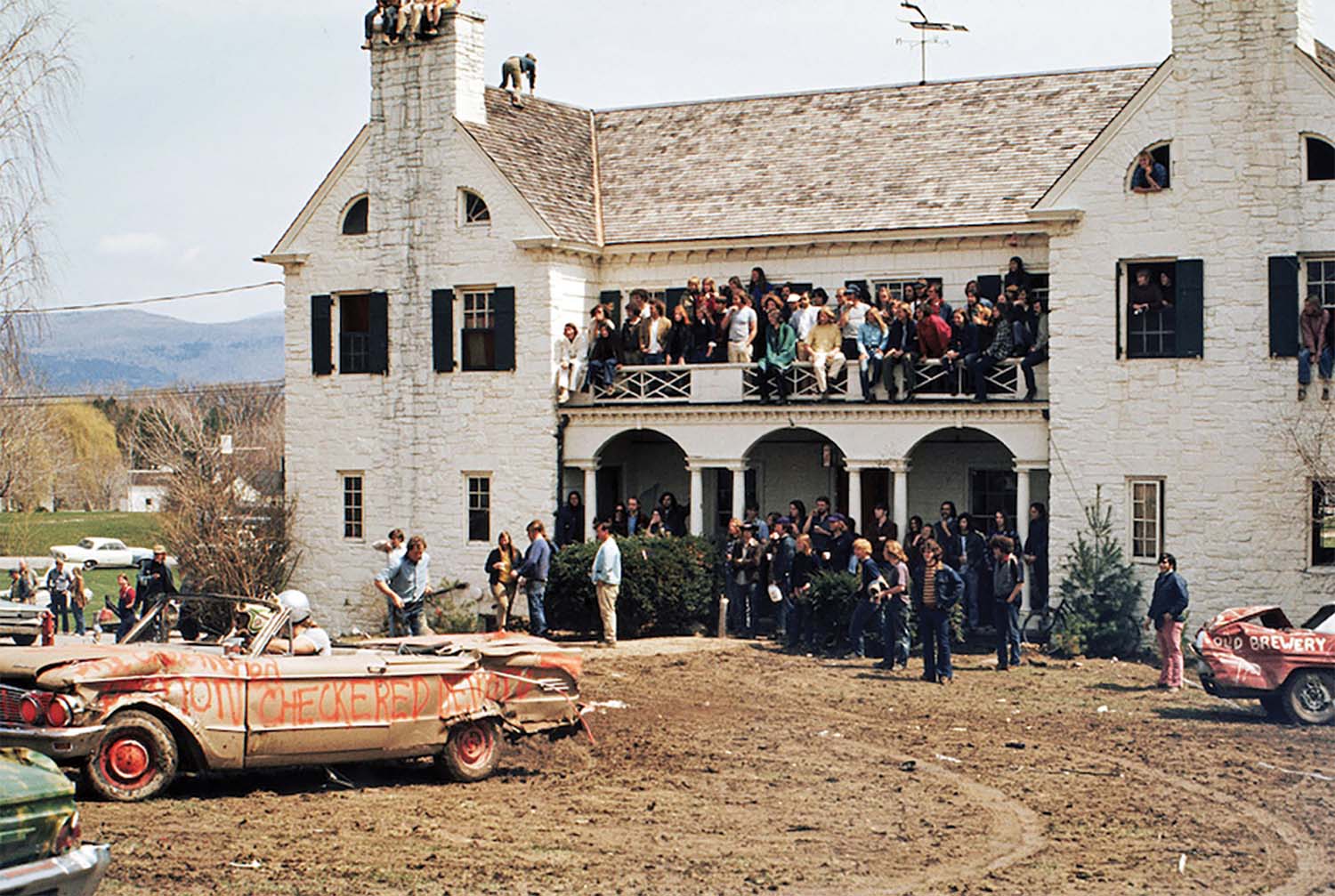 THE FORMER SIG Ep fraternity house on Middlebury’s South Main Street in 1972 ended up spontaneously hosting a demo derby on its front lawn when the local constabulary shut down a planned event south of town. Miraculously, nobody was hurt. Photo Courtesy of Dave Furney
By Karl Lindholm

Okay, a little bit of local history here, nostalgia too. The name of this column is “Sports (Mostly).” This week is a “Mostly” column.

I relate today, loyal readers, the story of the Demolition Derby on the campus of Middlebury College in the spring of 1972, at a time in the life of the country when college students were mostly out of their minds.

I came back to Middlebury in 1976 to work in the Dean of Students office with Dean Erica Wonnacott. My assignment for the annual Raft Race on Spring Weekend that year was to patrol in my car Three Mile Bridge Road, which runs adjacent to Otter Creek.

This was no “race.” It was a continuation of a party from the night before. If the current was too fast, rafters just tied their flimsy crafts to a tree on the shore and drank and partied to music from a boombox.

At our postmortems Monday morning, I said, “Erica, this is nuts! Somebody’s gonna die. Drinking? On the water!”

“Well, it’s better than the Demo Derby,” she told me. 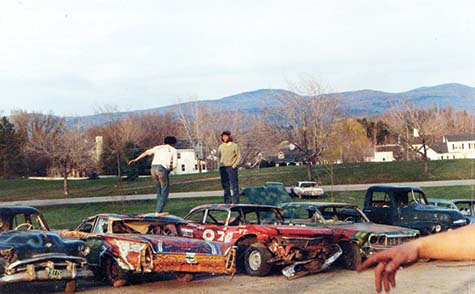 MUCH MAYHEM ENSUED on the front lawn of the former Sig Ep fraternity on South Main Street in Middlebury back in 1972.
Photo courtesy of Dave Furney

In my time away from Middlebury, I had actually heard vague reports about a demo derby on the front lawn of the Sig Ep fraternity, right there on Main Street, middle of campus, on the corner of Porter Field Road, now Meeker House.

I was sure the reports I heard were greatly exaggerated. I had assumed it was a one-off, singular event. Turns out it was much more than that: it was an annual event for four years, practically a tradition — and 1972 was its explosive conclusion.

Last month, the Middlebury College class of 1972 held its 50th reunion and the Demo Derby was animatedly recalled. I thought it would be a good time to get a true account. Dave Furney ’72 of Bristol shared his experience with me at lunch at Mister Ups and lent me the documentary evidence, a thumbdrive of a few dozen photographs of the ’72 fiasco.

He told me there were other demo derbies, organized by the Sig Ep boys, before the one on the lawn in front of the Sig Ep house — but not on campus. In particular, he recalled the one the previous year, 1971, in a big field behind the “junk yard” out on Route 7, just south of the Route 125 cut-off (it’s still there, “Auto Salvage”).

“That one, my junior year, was really off the wall. There were cars from all over New England — they drove ‘em here.” He estimated there were as many as 80 beater cars in that demo derby (a number amended downward in other accounts). “There were more spectators there than I ever saw at a Middlebury football game!”

“But,” he added emphatically, “you have to talk to ‘Buff.’ He can give you the whole account.”

Buff is Bruce McLaughry ’72, and he, assisted by Sig Ep pals, was the demo derby’s impresario and chief engineer. He took the time from renovating a house in Isle au Haut, Maine, to take my call and gave me the authoritative account of the much-mythologized ’72 demo derby in the front yard of the Sig Ep house.

“It all started out in a farmer’s field out by Lake Dunmore, and it grew from there. And it grew and grew and got more and more attention. It wasn’t just Middlebury guys, other campuses too, Dartmouth especially. In ’71, we took it to Blais’s junkyard on Route 7. Not 80 cars, but 50 or 60 easily. We just left the dead cars there. Blais was happy to have them.

“I borrowed his bulldozer and made a track, so we had races there too (in addition to the demo derby). It was a contained space.

“The problem was the authorities didn’t go along with us. 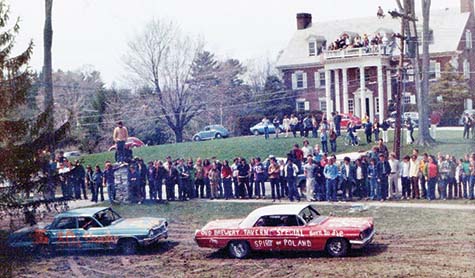 MUCH MAYHEM ENSUED on the front lawn of the former Sig Ep fraternity on South Main Street in Middlebury back in 1972.
Photo courtesy of Dave Furney

“I went out on the morning of the demo derby in the spring of ’72 to get things ready. The state and local police were there: ‘You’re not having a demo derby here today,’ they told us. That seemed unreasonable to us, but we retreated to Sig Ep. We’ll figure something out, we thought.

“We had no cellphones then, no way to tell people the plan had changed. Cars started coming to the field and junk yard and it was cordoned off. Everybody just came back to Sig Ep. Junk cars were lined up in our parking lot and all around the house.

“Then Rat Reed (Paul Reed ’70) came zooming up Route 30 in his big ol’ Ford, no muffler, and did a perfect doughnut on the lawn in front of the house — and it was ‘Let’s Go!’ Officer Ploof of the Middlebury PD jumped up on Rat’s car with a bullhorn to tell everybody to go home. But Rat had just painted his car and Officer Ploof slipped and got red paint all over his uniform.

“Rat then crashed into another old beater — and it was on! The cars started going around and around Sig Ep and then demo-ed each other on the front lawn.

“It wasn’t something we planned, not what we expected at all. It just kinda exploded. The town manager showed up and wanted to see the president of the house, but he was up on the roof and wouldn’t come down. It was crazy!

“People poured out of the fraternities. Dean Wonnacott showed up. The police were there. Route 30 was blocked off. Fred Spencer, campus security chief, just tried to keep everyone safe. It was amazing no one got hurt.”

“My car got smashed and wouldn’t immediately start, but after most everyone’s car died, I got mine going again and built a short ramp out of logs and boards and tried to jump in the air and land on top of another demo car, and on the second try, I did! 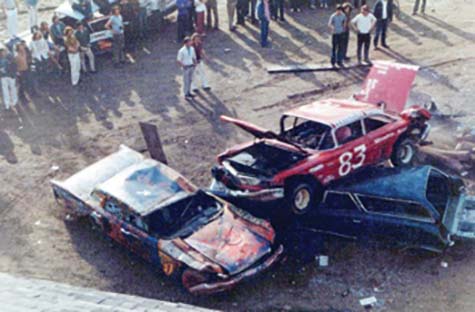 “At that point, Fred Spencer came over and said nicely, ‘Boys, I think that’s enough.’

“I became friends with Dean Wonnacott. I saw her many times then and later and we had some laughs. She called the demo derby that year ‘spontaneous bedlam.’”

If I were to run the risk of briefly being serious, I might connect the demo derby to the ethos of that time. Students in the class of ’72 arrived on campus clean-cut and strait-laced and within a very short time they were all tie-dye and denim and hirsute excess.

I would discuss the social revolution of the ‘60s and ’70s, the deep alienation and rebellion of young people represented in wildly irresponsible and self-destructive ways — behavior such as this collection of daredevils and adventure seekers, full of the timeless exuberance of youth (many, unsurprisingly, were alpine skiers!) expressed in the Demo Derby in May of 1972.

It all makes for a good story (with pictures!), and it was amazing indeed no one was hurt.

Karl Lindholm Ph.D, Middlebury ’67, is the Emeritus Dean of Advising at Middlebury College and can be reached at Lindholm@middlebury.edu.