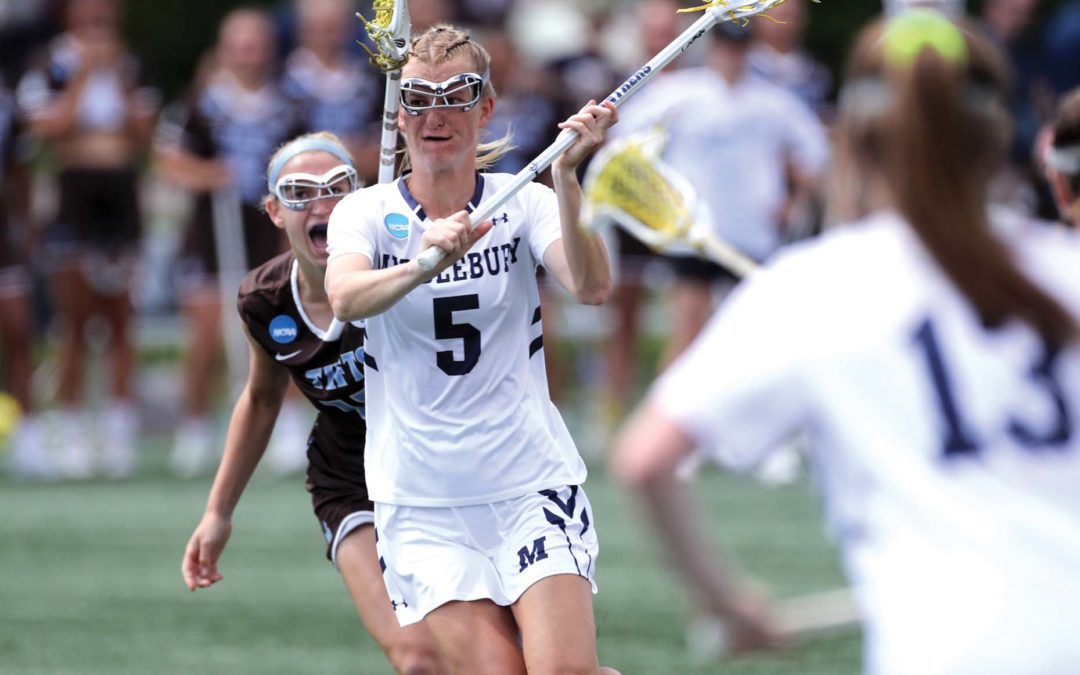 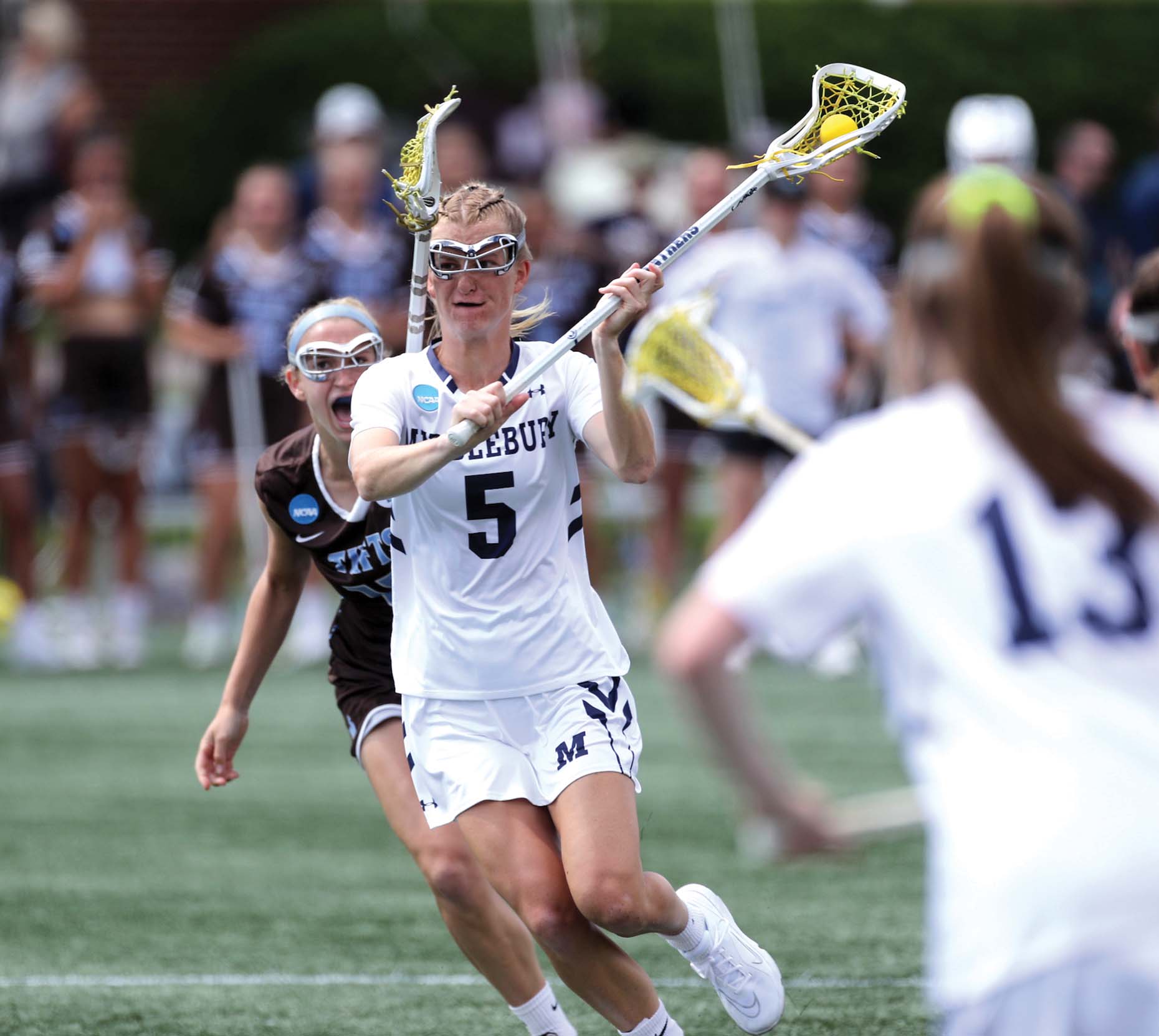 THE PANTHER WOMEN’S lacrosse team completed its dominant run through the NCAA D-III tournament by defeating Tufts in Sunday’s final, 13-5, in Salem, Va. The NCAA crown was the third won by a Middlebury College women’s varsity team this academic year. Photo by Keith Lucas
By Andy Kirkaldy

Middlebury improved to 22-1 and avenged its only loss of the season, a 9-8 setback to the 19-4 Jumbos in the NESCAC title game two weeks before.

The Panthers also claimed the program’s third title in the past seven years, in two of which they didn’t compete due to the COVID-19 pandemic, and completed a dominant run through the NCAA tournament.

Middlebury wiped out Gettysburg in Saturday’s semifinal, taking an 8-1 halftime lead on the way to an 18-5 victory. The Panthers outscored their five NCAA foes by 87-22 and didn’t allow an opponent to score more than six goals. They also followed the Middlebury field hockey and women’s ice hockey teams in winning NCAA D-III titles during this school year.

In Sunday’s final, Earley gave the Panthers a lift from the start by knifing through the Jumbo defense on the right side to open the scoring 2:02 into the contest and making it 2-0 three minutes later.

Defender Emma White initiated the next Middlebury goal by causing a turnover in front of the Panther net, carrying the ball up the field and setting up a Lily Riseberg score.

After the Jumbos got on the board with 6:22 gone, Kelcey Dion gave the Panthers a 4-1 lead by bouncing a shot just under the crossbar. Middlebury’s defense limited the Jumbos to one shot and forced eight turnovers in the opening quarter.

Earley made it 5-1 47 seconds into the second stanza, but Tufts made a push with back-to-back goals and better defense, and it was 5-3 at the halftime break.

Both defenses limited the chances in the third period, with each team scoring once. Middlebury’s Hope Shue made it 6-3 with a free position at 9:19, and the Jumbos’ Genna Gibbons answered at 5:29.

The teams traded goals 24 seconds apart early in the fourth quarter. Grace Getman picked up a ground ball after her own free-position attempt missed and scored at 14:10, and the Jumbos quickly responded to make it 7-5.

The Panthers then scored six straight to close the game out, with Earley providing the spark. She charged her way to the net to make it 8-5, and 56 seconds later cashed in on a free position. At 7:11, Earley made it 10-5 with a shot high into the net, and the title was in the Panthers’ grasp.

Soon afterward, Getman spun past a defender and converted, and Earley set up Susan Rowley to make it 12-5. Rowley added the final goal.

Earley tied a career-high with six goals, set a program mark with an 80-goal season, and with her assist set the program’s single-season scoring record with 99 points.

Barr, Getman and Enrietto were named to the all-tournament team along with Earley.

Panther head coach Kate Livesay won her fourth NCAA championship as a coach after leading Middlebury to the 2016 and 2019 crowns and also guiding Trinity to the title in 2012. She won twice as a Panther player in 2001 and 2002.

On Saturday, the Panthers dealt Gettysburg only its second loss of the season; the Bullets finished at 18-2.

The Panthers took a 5-0 lead after one period on route to their seven-goal halftime bulge. By the end of three periods, they had stretched the advantage to 14-4.

The Panthers held a 20-6 advantage in draw controls, largely thanks to Barr tying Middlebury’s single-game record of 12. White caused three turnovers, and Enrietto backstopped the victory with seven saves.