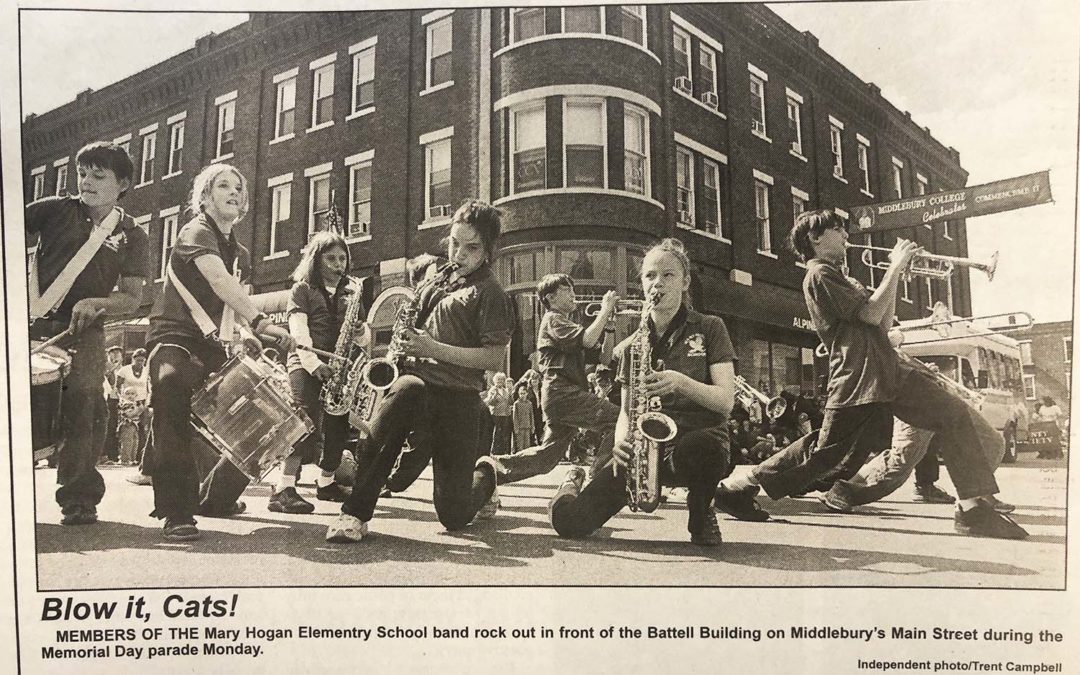 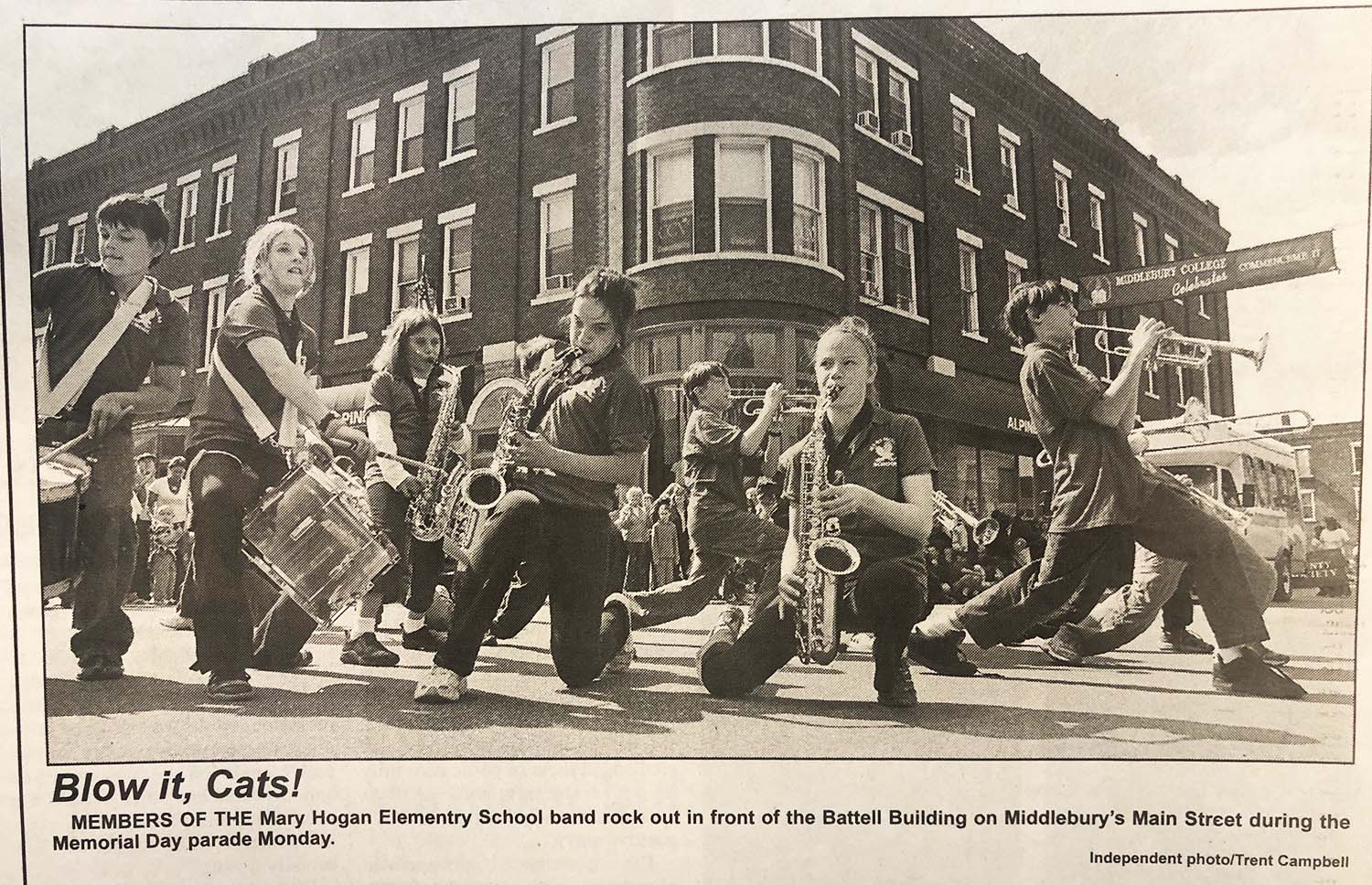 MEMORIAL DAY IN Middlebury in 2008.
By John S. McCright

ADDISON COUNTY — After two years without public Memorial Day festivities one might think that organizers of such events would be a little rusty. But that doesn’t seem to be the case, as a full slate of parades and other commemorations are set for this coming weekend.

“The parade planning has been under way for several months, and during the next few days the committee will be working to make sure it runs smoothly,” said Martha DeGraaf, parade coordinator for American Legion  Post No. 14, which is organizing the big parade in Vergennes for Monday. “Everyone is eager to be back, and participation appears to be at an all-time high.”

Monday’s spectacle in Vergennes is in some ways a capstone to Memorial Day, but there are public activities on Saturday, Sunday and Monday.

Memorial Day activities start with a somber ceremony on Saturday, May 28, with the reinterment of American Revolutionary War veteran Josiah Clark, who fought at the Battle of Bunker Hill. Originally buried in Weybridge’s Stow Cemetery, Clark’s remains were threatened by an encroaching river so they are being moved.

A funeral procession accompanying a horse-drawn caisson leaves Weybridge Congregational Church at around 10 a.m. and heads to First Weybridge Hill Cemetery, where the remains will find their new final resting place, accompanied by a color guard (See the full story).

The fun starts on Sunday with the Memorial Day parade in Orwell. Lots of groups, Little Leaguers, firetrucks, classic vehicles, Shriners and more are already signed up for the parade, which steps off on North Orwell Road at 1:30 p.m. Word has it that the 802 Ghostbusters group will be in the parade with their Ecto Jeep.

Then Monday, Memorial Day, will of course be a busy day.

Middlebury’s Annual Memorial Day Parade begins at 9 a.m. at Middlebury College’s Mahaney Center for the Arts and travels north on Main Street, around the town green, and concludes with a ceremony at the Soldiers’ Monument on Merchants Row. The theme this year is “Remembering our Guardians of Freedom.”

If you are in the Brandon area, look for a smaller parade there beginning at 10 a.m. It will process from the post office up Route 7 to the Civil War monument in Central Park. The parade will be followed by the town’s historical flower girl ceremony, a recitation of The Gettysburg Address, and a 21-gun salute.

Legion Post 14’s Memorial Day parade in Vergennes is next, and it will be a big one. As the purpose of the Memorial Day parade is to honor those who have paid the ultimate sacrifice for their country, the theme is “Home of the Free, Because of the Brave.” This year’s parade marshal is Edgar “Bub” Crosby Jr. (See story on Page 1A).

Look for a mile or two of marchers and floats stepping off from Vergennes Union High School at 11 a.m. and processing to the City Green downtown. No formal remembrance in the park is planned at this point. But a chicken barbeque will be held at Post 14 following the parade.

DeGraaf said several floats, bands, Scouting troops and fire departments have preregistered to take part, along with other traditional participants such as the Shriners’ Cairo Legion of Honor and the Champlain Valley Historical Re-enactors.

“I expect the parade to be very well attended,” DeGraaf said, “and even though there will be not be a traditional service of remembrance in the park following the parade, it is my hope that every participant and spectator remembers what Memorial Day is all about, a time to mourn U.S. military personal who have died while serving in the armed forces.”

The day will be capped with an event that truly does honor our war dead.

In Bristol, American Legion Post 19 will host a Memorial Day Ceremony on the village green at 1 p.m. Post Commander Ron LaRose will preside; Jason Beams, a major with the Vermont Army National Guard, will be the guest speaker.

Maj. Beams, who is an associate professor of Military Science at UVM, enlisted in the Guard in 2000 as an armor crewman. In 2005, he received his commission through the Army ROTC Program at Western New England College. He has served as a platoon leader with Task Force Green Mountain in Ramadi, Iraq.

Upon his return from deployment, Maj. Beams served as an engineer platoon leader and later became a fulltime officer with the Vermont Guard as a logistics officer for the Special Troops Battalion, 86th IBCT (MTN). His next deployment took him to Bagram, Afghanistan, for a year. Upon his return from that deployment, he became commander of Company A (EN), Special Troops Battalion, 86th IBCT (MTN).

In 2020, Maj. Beams became the Vermont Army National Guard Liaison to UVM and is serving in his present position.

Maj. Beams resides in Monkton with his wife, Sara, and three children, Owen, Eleanor and Francis.

This year’s ceremony will not be preceded by a parade. But there will be a solemn ceremony in the park that everyone is invited to attend.