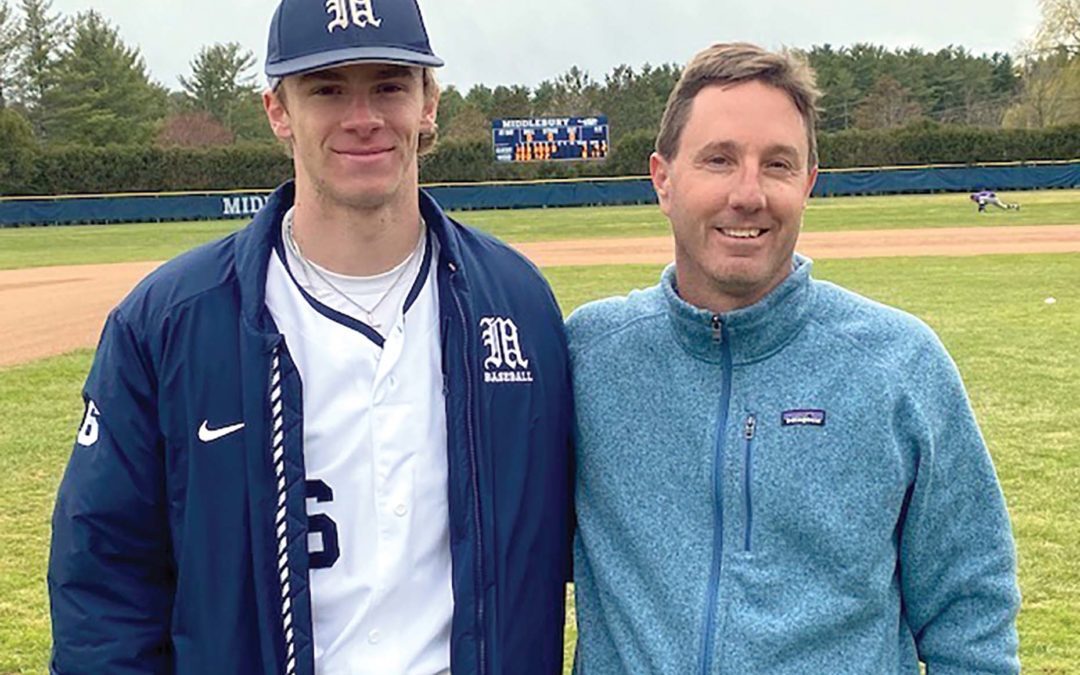 SAMMY SMITH, LEFT, an outfielder on this year’s NESCAC champion Middlebury College baseball team, poses with his dad, Brad, who was an infielder for the Panthers and captain of the 1995 team. Brad is the owner of the New Britain (Conn.) Bees of the Futures Collegiate Baseball League, where Sammy and three of his teammates will play this summer. Photo by Karl Lindholm
By Karl Lindholm

Sammy Smith found out five minutes before the first pitch that he was in the starting line-up last Friday in the first game of the NCAA regional baseball tournament in Rochester. Middlebury Coach Mike Leonard wanted to get his bat in the line-up and moved NESCAC Player of the Year Alec Ritch into the designated hitter spot.

All Sammy did in that crucial first game was lead Middlebury to a 10-5 win over the host Rochester Yellowjackets with four hits, the big hit in the decisive sixth inning a ringing triple scoring two runs.

It’s not like Sammy is some end-of-the-bench unlikely hero. He started 31 games in the outfield this season but missed four games near the end of the regular season, the result of a sprained thumb sustained making a diving catch of a line drive in the 16-0 whitewashing of Amherst on April 22.

A sophomore, Sammy was an important member of this year’s deep and talented Middlebury team in its record-breaking 2022 season (31-14, NESCAC Champs, winners of two games in the NCAA D-III tourney). 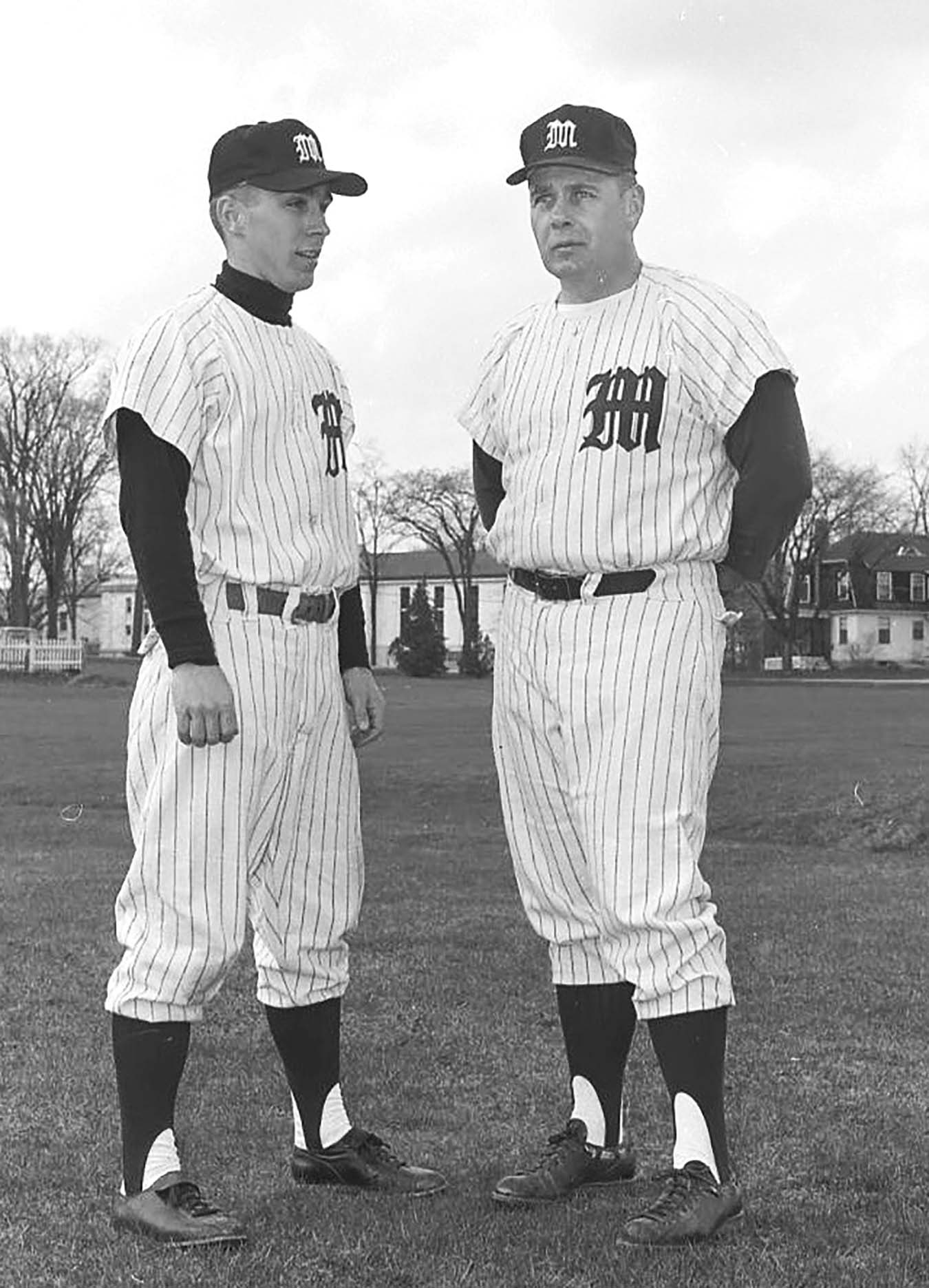 DALE SMITH, LEFT, was an infielder and captain of the 1967 team. He is shown here with his coach Wendy Forbes (1963-84). Dale’s son Brad played ball for Middlebury in the ’90s and grandson Sammy Smith ’24 is on the team now. Photo courtesy of Middlebury College Sports information

Coach Leonard notes Sammy’s “athleticism, work ethic, and competitiveness. He’s one of our most talented players. His teammates really respect the standard he sets.”

At 6’1” and 195 pounds, Sammy is a powerful hitter, finishing the year with a solid .270 batting average, six home runs and five triples, and plays stalwart defense in the outfield. Coach Leonard called his diving catch in the Hamilton game “the defensive play of the year.”

Sammy is the oldest of Brad and Wendy Smith’s six children and the only baseball player. According to his dad, Sammy has “been around baseball his whole life.” Brad currently owns the New Britain (Conn.) Bees of the Futures Collegiate Baseball League (the same league the Vermont Lake Monsters are in).

The New Britain team has a distinctive Middlebury look. Their manager is Donnie McKillop ’10, a football and baseball ace at Middlebury and the head baseball coach at the Loomis-Chafee School in nearby Windsor, Conn. This year the Bees will have Midd players Sawyer Duarte, Charlie Kutts, and Henry Gustafson, in addition to Sammy, on their roster.

Brad Smith was a history major at Middlebury and the shortstop and leadoff batter on the baseball team, a smart, resilient, and skillful player. In his four years, the team was 48-30. His coach, Bob Smith, said of him (in a phone call this week), “he played with a really good group of teammates: They were so close and really loved the game.

“Brad was a very solid shortstop, so valuable to us in the field. He was kind of a quiet leader. As coach, I would go to Brad for his counsel and to get the pulse of the team.”

Brad’s first job after graduating was with the Chattanooga Lookouts, the AA team of the Cincinnati Reds, owned by Middlebury graduate Frank Burke ’83 (who pitched a no hitter for the Panthers!). Brad met Wendy in Tennessee and Sammy was born there.

He spent eight years in Chattanooga, rising from an internship to assistant general manager. “I owe Frank a big thanks,” he says now. “He took me under his wing and taught me the business, inside and out.”

Brad’s dad, Dale, was the best player in his class at Middlebury, captain of the ’67 team. I can report with authority on his talents as I was his teammate in baseball (and basketball). Under 6 feet tall, Dale was a middle infielder who batted at the top of the line-up, not a pesky hitter, a line drive hitter.

Dale grew up in the small town of Red Hook, N.Y., in a family of modest means — his father owned a gas station. An Economics major, he earned an MBA from Rochester University after serving in Korea in the Army during the Vietnam War. 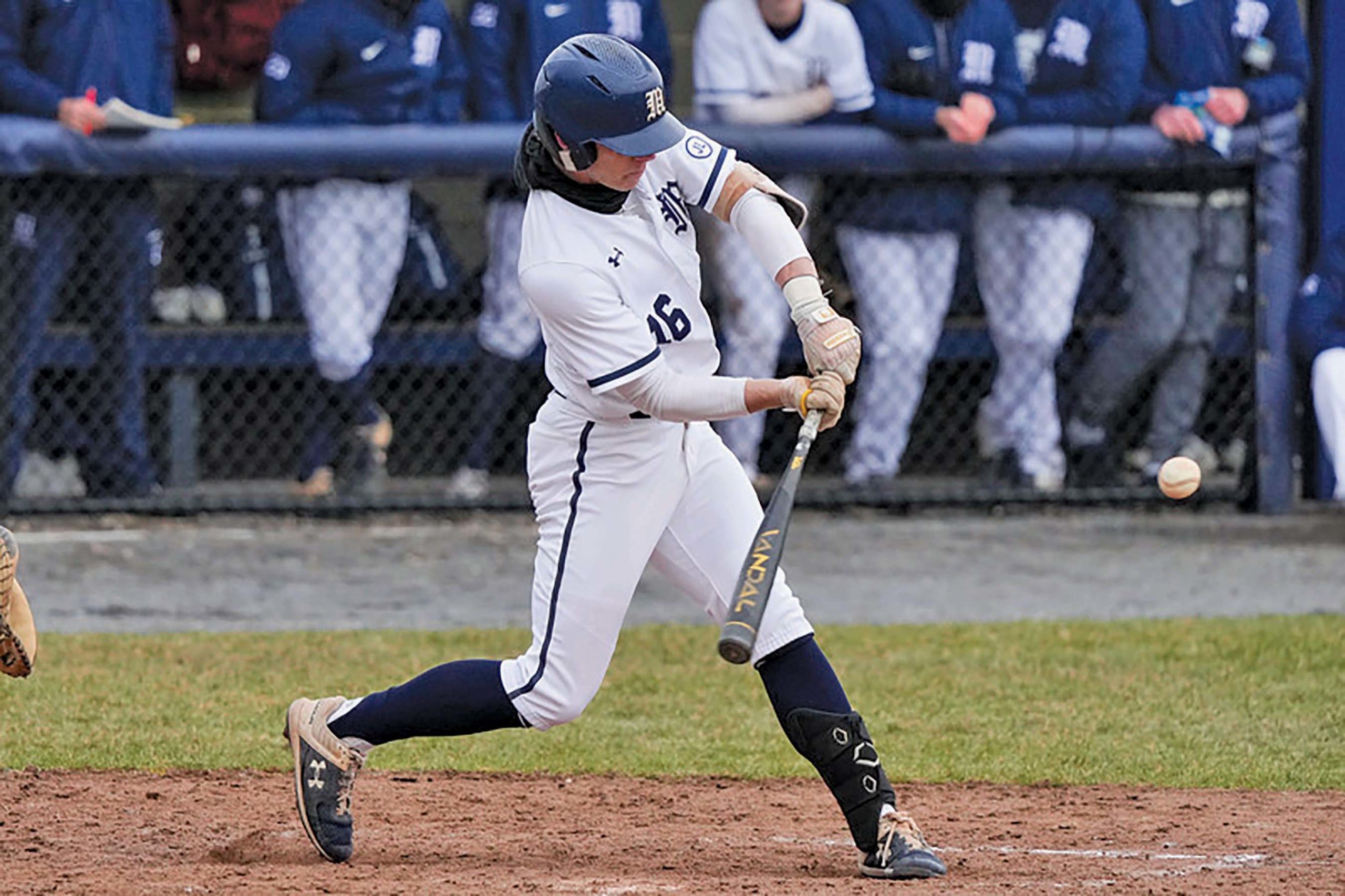 Dale did very well in business, becoming in time the CEO of Mueller Water Products, and retiring in 2010 with Kathy (Brad’s mom) to Barnard, Vt. He played golf avidly and fished Vermont’s lakes and streams. He owned thoroughbred racehorses and ran them in Kentucky, Indiana, and Florida.

“I basically tricked my dad into buying a baseball team,” Brad says now. When Smith Family Baseball purchased the Kannapolis (N.C.) Intimidators from the Dale Earnhardt family in 2005, Brad ran that team as its president.

Kannapolis, a single A affiliate of the White Sox, won the league championship that first year, and the White Sox won the World Series, so Brad and his dad received World Series rings! They owned Kannapolis for 10 years before moving back to the Northeast and purchasing the New Britain club, then of the Atlantic Independent League and now of the Futures League.

Dale was the picture of health in April 2012 when he and Brad spoke to the Middlebury baseball team at their annual dinner about baseball ownership and their lives in the game. They had anticipated a fruitful collaboration for years to come, but Dale contracted Lyme disease in 2015 and died from its complications at age 70.

Sammy was in the eighth grade when his grandfather died. He remembers Thanksgivings in Vermont with his grandparents, having a catch with Dale, and the wood bat, a Louisville Slugger, with “Middlebury” inscribed on the barrel. 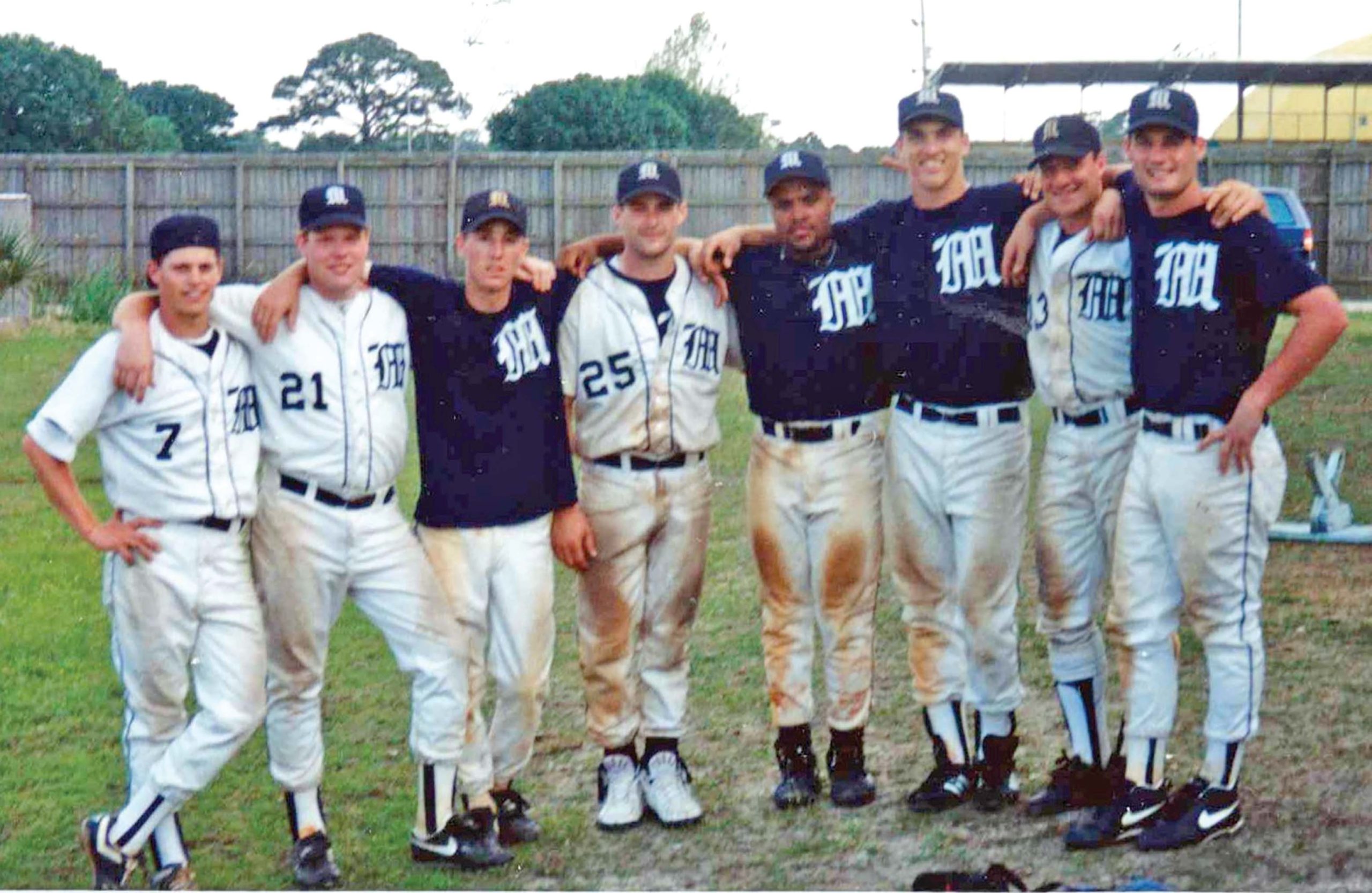 BRAD SMITH IS pictured here (3rd from left) with his teammates in 1994. One of the captains that year, he led that team to a 17-8 record. Coach Bob Smith (no relation) called Brad and his teammates “a close group who really loved the game.”

The highlight of Sammy’s season this spring was a homer he hit against Tufts, the reigning NESCAC champs, which has had Midd’s number in recent years. “We smoked ’em in that game, and that felt good.”

“I love our team chemistry,” Sammy says. “We pick each other up. Baseball is a difficult sport. It teaches you things other sports can’t. There’s so much failure, you learn to deal with adversity and keep your spirits up.”

Someday, decades hence, perhaps some Independent scribe will cover games at a grand South Street Baseball/Softball Complex, and write about a scion of Sammy’s, the fourth generation of Smith Family Baseball at Middlebury College!