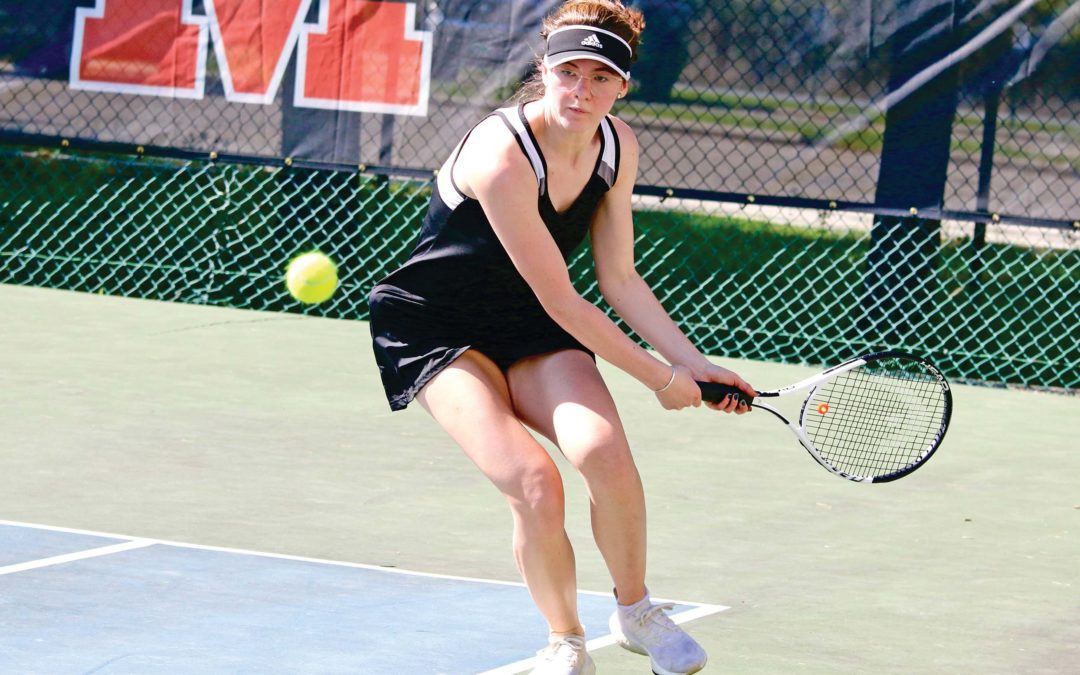 MUHS DOUBLES PLAYER Oni Krizo lines up a two-hand backhand vs. Rice on Friday, May 13. Krizo and her partner, Maeve Roche, picked up a key victory in the Tigers’ 4-3 win. Independent photo/Steve James
By Andy Kirkaldy

Last week the Tigers edged Rice on Friday, 4-3, after losing to defending Division II champion Montpelier on May 11, 6-1. On Monday, the Tigers won at St. Albans, 4-3, even though they were shorthanded and the match was moved indoors in St. Albans due to the day’s thunderstorms in Middlebury.

The Rice match was a continuation of a contest postponed from April when rain struck with the Tigers on top, 2-1. The remaining four individual matches were picked up where they left off previously. 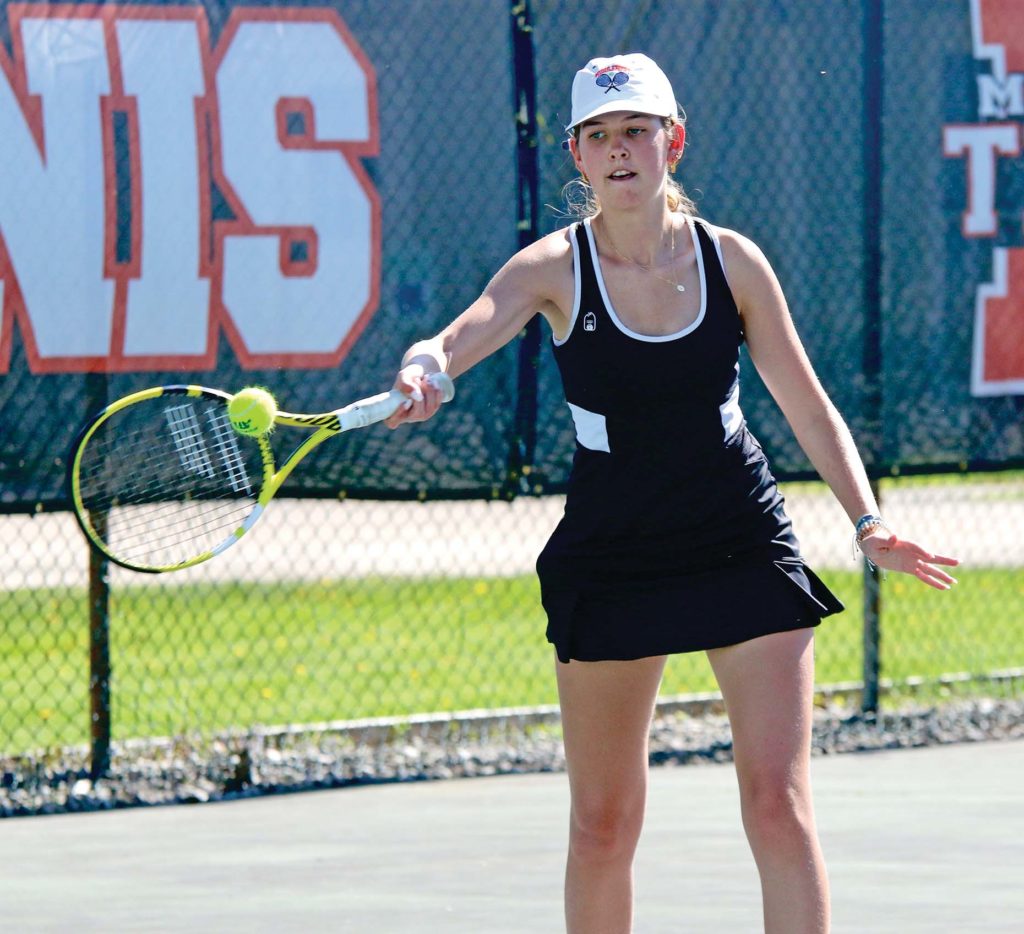 Most were hotly contested, and MUHS picked up the overall victory by winning three of four matches that went to extended tiebreakers.

No. 5 singles player Kaya Wright and the doubles teams of Audrey Carpenter and Caroline Nicolai and Maeve Roche and Oni Krizo prevailed in those nailbiters to give the Tigers the overall win. Middlebury’s No. 2 singles player Julia Bartlett won more easily.

The scores in the individual matches vs. Rice were: 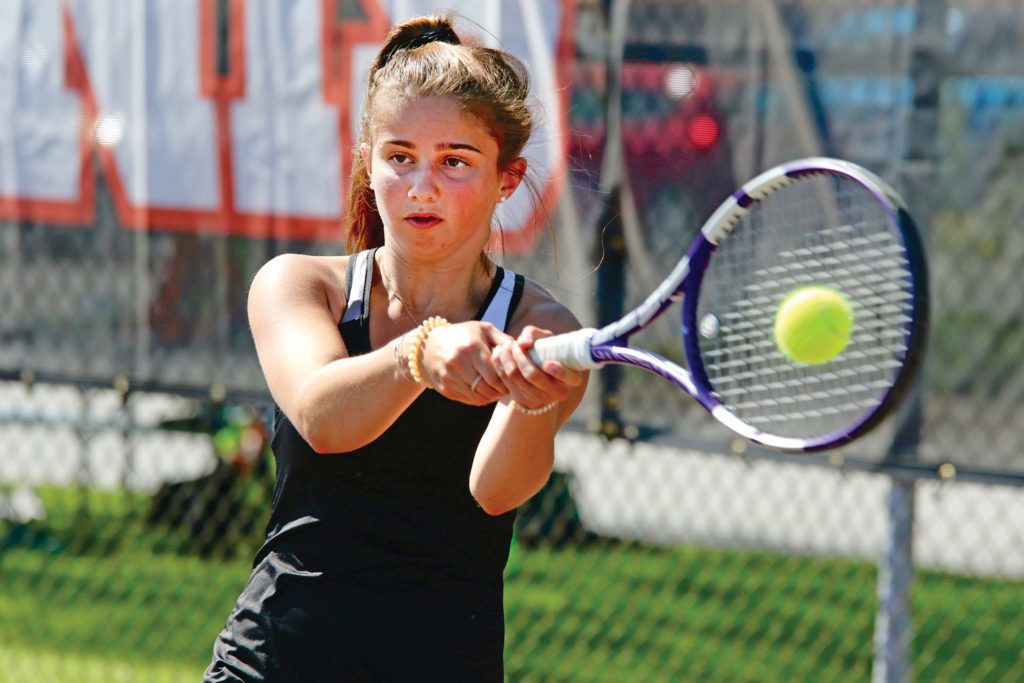 MUHS NO. 1 GIRLS’ tennis player Scarlet Carrara focuses as she rips a backhand during her May 13 tiebreaker vs. Rice’s Daphne Lassner. Lassner edged her, but the Tigers prevailed.
Independent photo/Steve James

The Tigers’ loss to Montpelier was a rematch of the 2021 D-II final, won by the Solons. Only Bartlett at No. 2 singles won her match vs. the Solons, although matches were generally competitive. 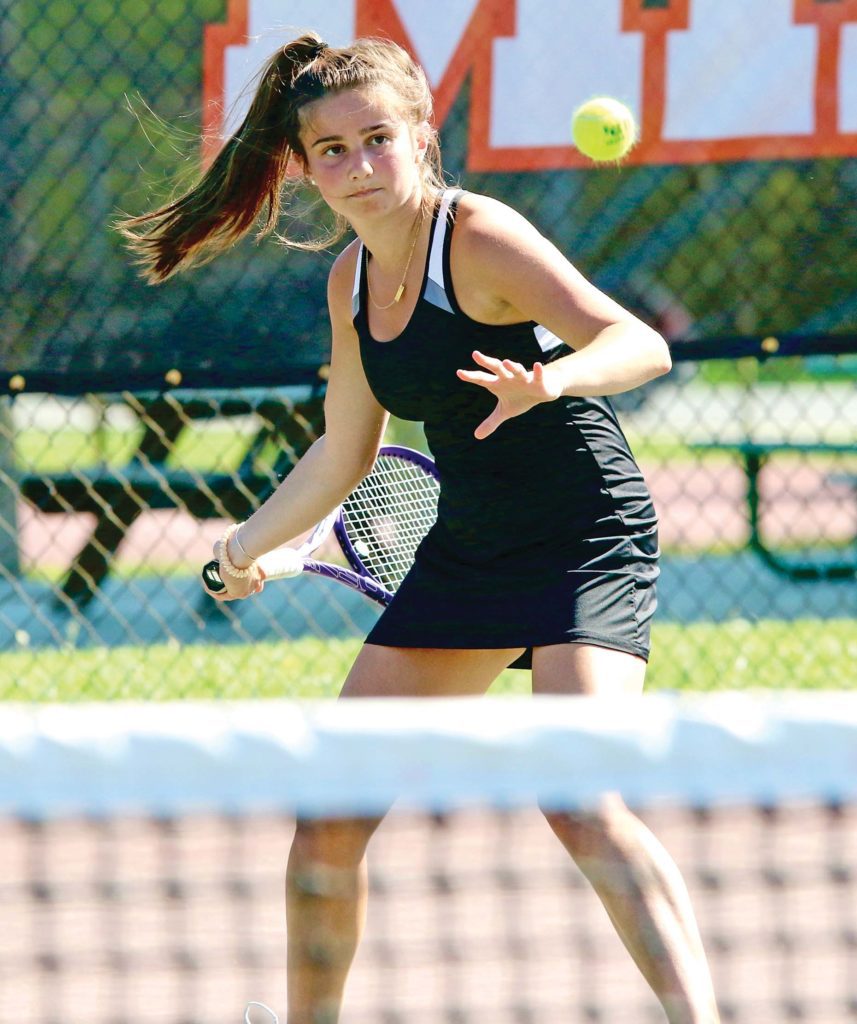 TIGER NO. 1 GIRLS’ tennis player Scarlet Carrara sets up for a baseline forehand during her May 13 match against Rice’s Daphne Lassner, which Lassner took in a tight tiebreaker. MUHS took the overall match, however.
Independent photo/Steve James

On Monday Coach Dan Comar had to juggle the MUHS lineup when Bartlett couldn’t participate, and he credited Carrara at No. 1 and Cotroneo, moving up to No. 2, for setting the tones with big wins, Krizo for moving to the No. 5 singles slot and prevailing, and “yet another new pairing at No. 2 doubles coming through in the final match played.”

The individual scores vs. the Comets were: