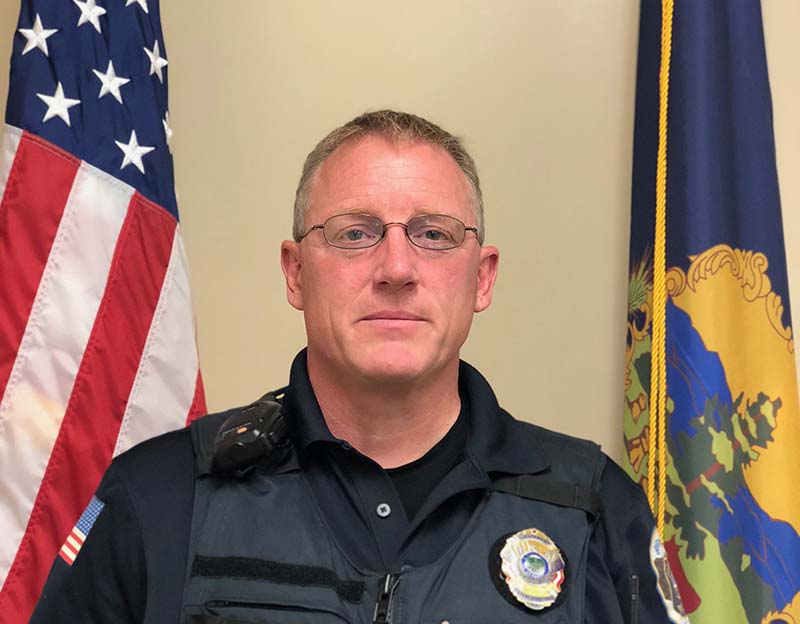 “There was one individual we went to frequently,” said BPD Chief Bruce Nason. “Usually, we’d spend 15-20 minutes talking on the porch outside. They needed, I think, that person-to-person interaction, face-to-face, and we did what we could to help them get through it.”

This is just one of the things Bristol police do, and it’s part of an overall community policing approach Nason and his officers were using well before the pandemic.

“We check in with the people who may have had a mental health crisis or something similar to that, or we’ll follow up days afterward — call or maybe stop by, maybe have a coffee with them,” Nason said. “Everybody I’ve talked to sees the benefit of it.”

One of those benefits is that when police are able to take time to follow up and check on residents experiencing mental health or substance abuse issues, it tends to reduce the number of extreme crisis situations police are called to respond to in the future, Nason said.

But the follow-up got a lot more complicated during the pandemic. Residents who had experienced crisis situations were finding it difficult to obtain follow-up appointments or establish longer term care situations.

“Right now, if somebody’s looking for some kind of mental health services, there’s a backlog,” Nason told the Bristol selectboard during its April 25 meeting. “So when somebody’s in crisis we need somebody that could help immediately — and then for the next two to three weeks, before they get into more long-term service.”

The department only recently switched to using a database that will allow it to track such cases, so Nason doesn’t have any “hard stats,” but he told the selectboard the number of mental health calls has “increased quite a bit.”

Which is why Nason has asked the town to consider a police department position for a mental health/substance abuse worker who could fill that gap.

“We want people to be comfortable enough to be able to call us when they’re in crisis,” Nason told the Independent. “Our focus here in Bristol is always community-oriented policing and we’ve developed a good rapport with the public since we’ve been focused on that.”

Some residents will call the BPD before calling the organizations they probably should, he added, because police take the time to sit and talk and guide them toward the services they need.

“But it’s the ongoing assistance that law enforcement can’t do,” Nason said.

The Vermont State Police has created such a mental health worker position at its New Haven barracks, and Nason believes the VSP has seen some success with it.

The VSP mental health worker is available to assist Bristol police if needed, but the couple of times BPD has really needed it, the person was not on shift, Nason said. “It’s not their fault, it’s just scheduling.”

If the state ever decides to add another such position to the barracks, that would be great, Nason said. But it would be even better if Bristol had someone in its own community “who can come to recognize those triggers, or recognize when certain behaviors seem to be escalating, and then can make a nonthreatening call to the individual and just say, ‘Hey, how are you feeling? Can I help you?’”

WHAT IT WOULD COST

Nason estimated a full-time position would cost about $80,000 a year.

This would represent a 15% increase in the current BPD budget of $504,000, which is funded by a relatively small number of residents and businesses within the roughly one-square-mile Bristol Police District.

But Nason has been brainstorming on the position with selectboard member Ian Albinson and they have concluded it might be a viable contender for COVID-relief funding through the American Rescue Plan Act (ARPA).

Bristol is slated to get nearly $1.2 million in ARPA funding and has elected to follow the U.S. Treasury’s “Final Rule,” issued on Jan. 6, which gives municipalities more flexibility on how to spend that money.

One avenue, Nason suggested, would be to fund the position through ARPA for the first couple of years and then seek additional funding — such as the sorts of grants that recently allowed the department to add a fourth full-time officer to the force — to keep it going.

“I think if we’re able to be successful at this, people will be able to see the benefit, and it will continue,” he said.

Since some of the calls are coming from people who live outside the police district but happen to be in the district when they call, selectboard member John “Peeker” Heffernan wondered if it would make more sense to create a town-funded position that worked under the direction of the police department.

That could work, too, Nason said.

BPD has also explored the possibility of partnering with Vergennes police or with agencies like Counseling Service of Addison County or the Turning Point Center of Addison County, which serves people experiencing substance use disorders and other addictions.

“(It) would alleviate the administrative time it takes to care for individuals with mental health conditions, which will in turn benefit the community by lowering the incidences of incarceration and/or hospitalization,” Mayhew wrote in an April 28 Front Porch Forum post. “Peer support workers are a powerful tool when aligned with our law enforcement officers.”

Nason works closely with the Turning Point Center and has been a valuable partner, Mayhew said.

But “even with this partnership there are gaps in service that he is unable to provide,” she continued. “This new position would take the ‘social work’ burden off of the untrained PD officers and more appropriately place the job on a more qualified individual who has the time to more holistically care for the most vulnerable members of our community.”

The Bristol selectboard agreed it’s an idea worthy of more consideration and planned to discuss it more formally at a future meeting.