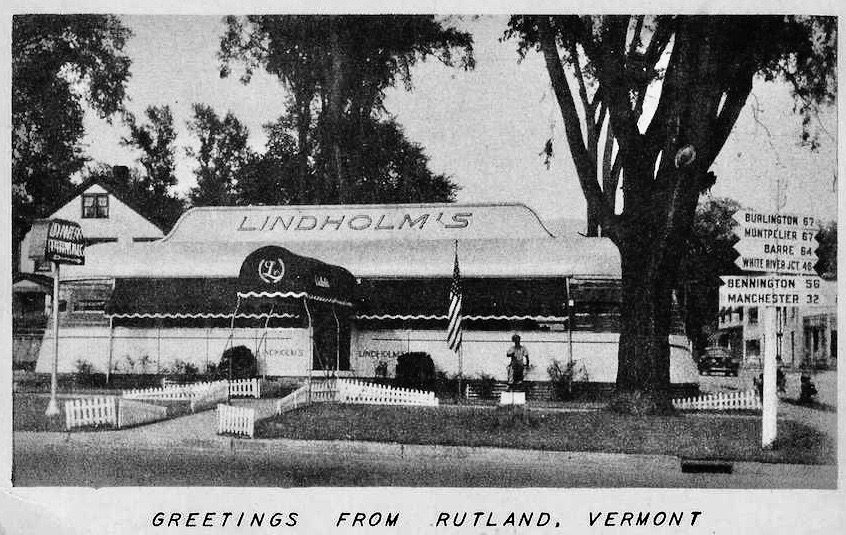 WHEN HE WAS a student at Middlebury College, our sports columnist was quite sure he was the only Lindholm in Vermont, until he drove by the Lindholm Diner in Rutland! Now the sports world seems overrun with Lindholms.
By Karl Lindholm

I remember walking into Farrell’s Men’s Store in Middlebury my freshman year in college. Jimmy Farrell, the proprietor, shook my hand and asked my name. I told him and he immediately said, “You’re from Rutland.”

This exchange happened again and again, whenever I met Middlebury townspeople. I was baffled for a long time. Then I had the occasion to drive through Rutland on Route 7 and saw the Lindholm Diner right there on the corner.

I later learned about Lindholm Motors (the first VW dealership in Vermont), and the Lindholm Sporting Goods Store. It was apparent the Lindholms were big in Rutland.

Growing up, I was pretty sure there were no Lindholms in the world I wasn’t related to. It’s not a common Swedish name, like Peterson, or Olson, or Johansson, and New England was never a hotbed of Swedish immigration. My people settled here to work in the watch factory in Waltham, Mass., on the Charles River just west of Boston, a part of a small but tight Swedish community.

Today, quite to my surprise, the sports world seems overrun with Lindholms. Have you noticed? I figure all we Lindholms must be related in some way, distant cousins perhaps.

The big Lindholm news is that the Boston Bruins traded with the Anaheim Ducks in mid-March for Hampus Lindholm, an outstanding defenseman. He immediately was paired with Charlie McAvoy as the B’s top blue line combination. Hampus was acquired to enhance Boston’s Stanley Cup chances.

Though he’s only 28, Cousin Hampus is in his eighth season in the NHL. On Sunday, May 1, he was the subject of a major feature on the first page of the Boston Globe. Hockey writer Matt Porter revealed that Hampus is called “Lindy” by teammates and friends, which is also how my dad, Milton Lindholm, quite an athlete himself (football), was universally known.

There’s another Lindholm in the National Hockey League, also a Swede, who plays all the way on the other side of North America, Elias Lindholm, of the Calgary Flames. He claims he is no relation to Hampus, but I think he’s not looking hard enough.

Cousin Elias is a high-flying forward, who was drafted, like Hampus, in the first round (fifth overall). At 27, he is playing in his ninth season in the NHL. Both the Bruins and the Flames have a Lindholm leading them in the postseason.

When Brett and I named our son “Peter,” we didn’t know he was the namesake of one of the top athletes in the world in his sport. This other Peter Lindholm won world championships in curling in 1997, 2001, and 2004, and appeared in three different Olympic Games. Curling is a sport that entrances Americans every four years.

My own children were Lindholm athletes. Jane and David had successful college careers in rowing and soccer, and Peter and Annie were enthusiastic members of MUHS teams. All are sports fans, which pleases their dad to no end.

David Lindholm is the athletic director at Bard College. Perhaps as tacit acknowledgement of Sweden’s Peter Lindholm’s admirable career, he builds a curling rink on the tennis courts at Bard each winter.

Finally, there’s Cousin Remi Lindholm of Finland who earned international recognition in last February’s Winter Olympics in Beijing. Remi’s event, the 50-kilometer cross-country race, was delayed more than an hour and shortened to 30K because of concerns about skiers’ safety in the extremely cold and windy conditions that day.

I first heard about Remi’s race on ESPN’s Sports Center, then on the CBS Evening News — and I read about it the next day in the Globe. No, Remi didn’t win the race and set a world record. It was his misfortune that brought him fleeting fame. Here’s the headline from CNN online on Feb. 21: “Cross-country skier Remi Lindholm suffers frozen penis in mass start race.”

What surprised many was Remi’s admission that this was the second time he had been coldcocked in a race. He described the pain of the warming-up process as “unbearable.” This was confirmed to me by a Middlebury friend who had been similarly afflicted in a long cross-country event — and was entirely sympathetic.

Not so sympathetic were the dozen or so of my friends who emailed me their clever commentary on poor Cousin Remi’s fate in the Olympics.

If truth be told, my immediate Lindholm clan are not really Lindholms at all.

As a young man, my dad, the aforementioned Lindy, took a summer school course in anthropology. The professor was showing off in the first class by going through the names of the students in the class and commenting on their national backgrounds.

“Ah, ‘Lindholm,’” he said, “a Swede, and one who came from a family of status or means,” and then explained Sweden’s patronymic convention, in which sons take on as their surname the first name of the father, hence all those Petersons and Johanssons. Members of the nobility or clergy adopted their own names.

My dad went home and proudly reported this information to his mother, who said, “Sit down, son, and I’ll tell you the story of the Lindholms,” which in short goes like this:

My great-grandfather was Carl, the son of Olof Larsson — consequently, Carl Olsson. When he entered the Swedish military, he was allowed (encouraged!) to choose another name because of the abundance of Olssons.

He chose “Lindholm,” which essentially means someplace where there’s a linden tree. When he left the military, he retained the name. He liked it. If he hadn’t, we would all be Olsons!

I asked my mother once why they named me Karl with a K, and not a C, if I were named after my historic forebear, Carl.

She shrugged: “We preferred it.”