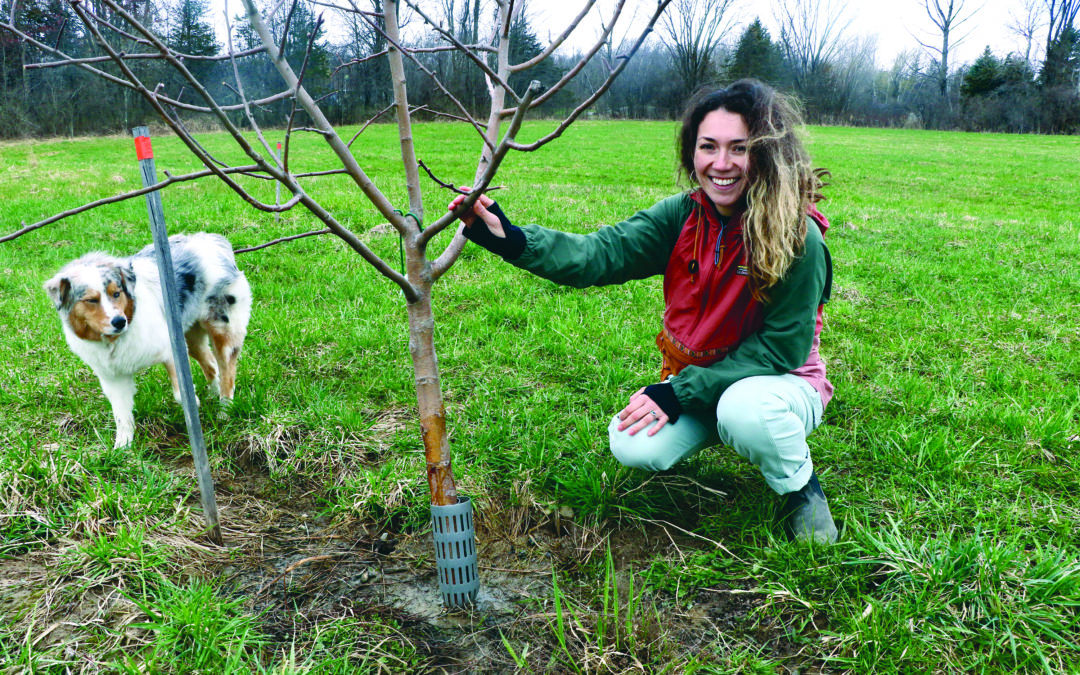 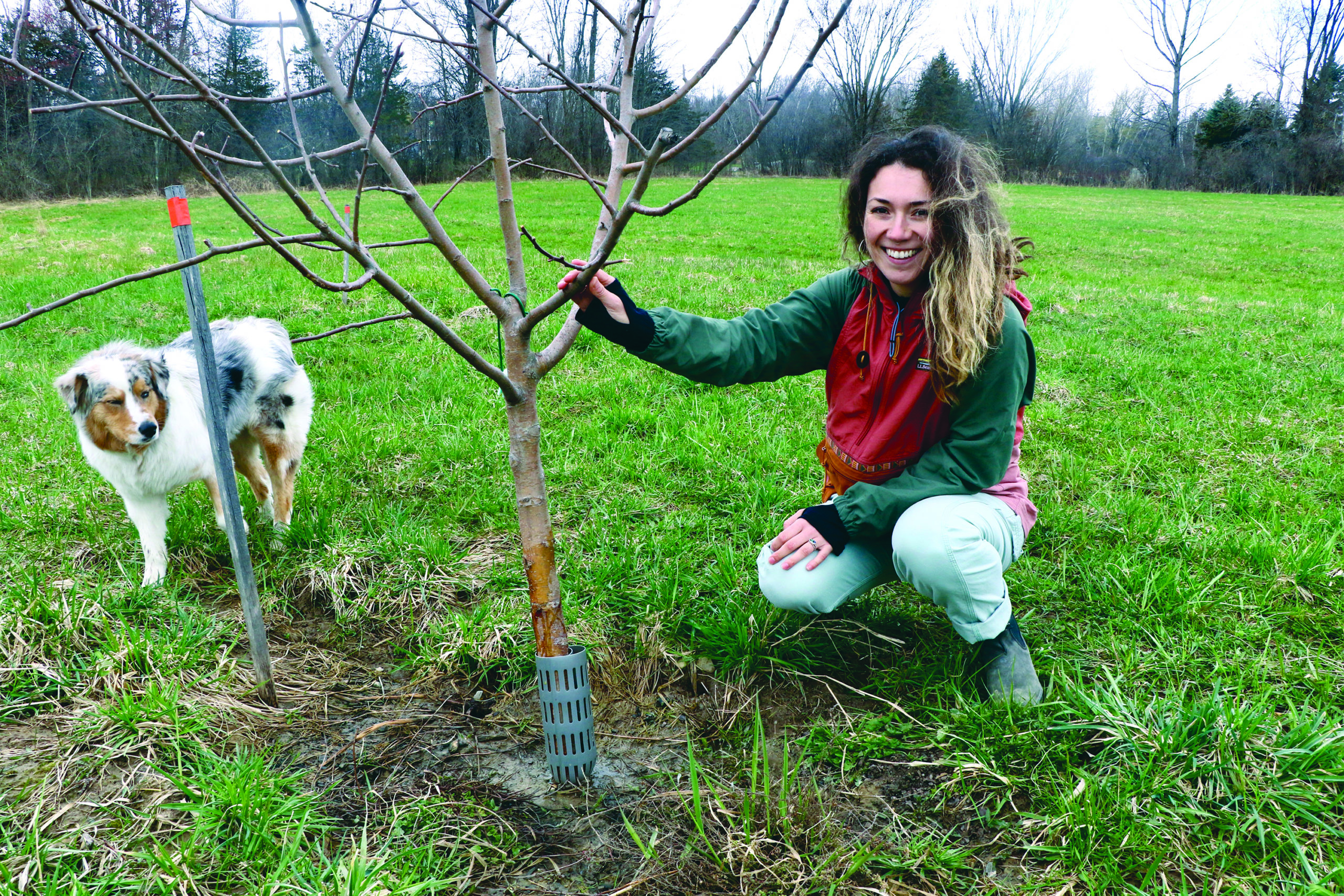 NATURAL WINEMAKER CAMILA Carrillo shows an apple tree she planted on her New Haven property which could contribute fruit, along with four or five acres of grape vines that will be planted, to her own line of La Montañuela wines. Independent photo/Steve James
By John S. McCright

For someone whose business is literally planted in a small patch of Vermont soil, Camila Carrillo has connections all around the world. And not just acquaintances with people in far-off lands, she has worked and learned her craft — natural winemaking — at vineyards on four continents, as well.

After working her first gig in the wine business at a tasting room in Vermont, Monkton resident Camila Corrillo began a series of internships at wineries and in vineyards in around the United States and in several other countries that eventually brought her to the Champlain Valley. Along the way she learned the technique and the craft of growing grapes and making wines. She learned so well that she was able to start harvesting grapes at a Hinesburg vineyard that she could make into her own wines, she started her own label, “La Montañuela Wines,” she made a connection with a big-name wine distributor who is selling her bottles far and wide, and a year ago she bought about 9 acres in New Haven, where she will plant her own vines and harvest her own grapes to use in her own well-respected wines.

Corrillo said the internships were a great way for her to learn the winemaking business. She has been interested since she would be served wine at dinner during her days at Montpelier High School. But, although some people learn the chemistry and science of winemaking in college, Carrillo knew early on that wasn’t the route for her.

“I’m more of a hands-on learner,” she said. “Learning out of a book is very hard for me.”

She worked her first grape harvest in Sebastopol, Calif., in 2015, and found that this was her entreé into winemaking.

“It was empowering,” Carrillo recalled. “It was really valuable to see that I can learn something by doing it.” 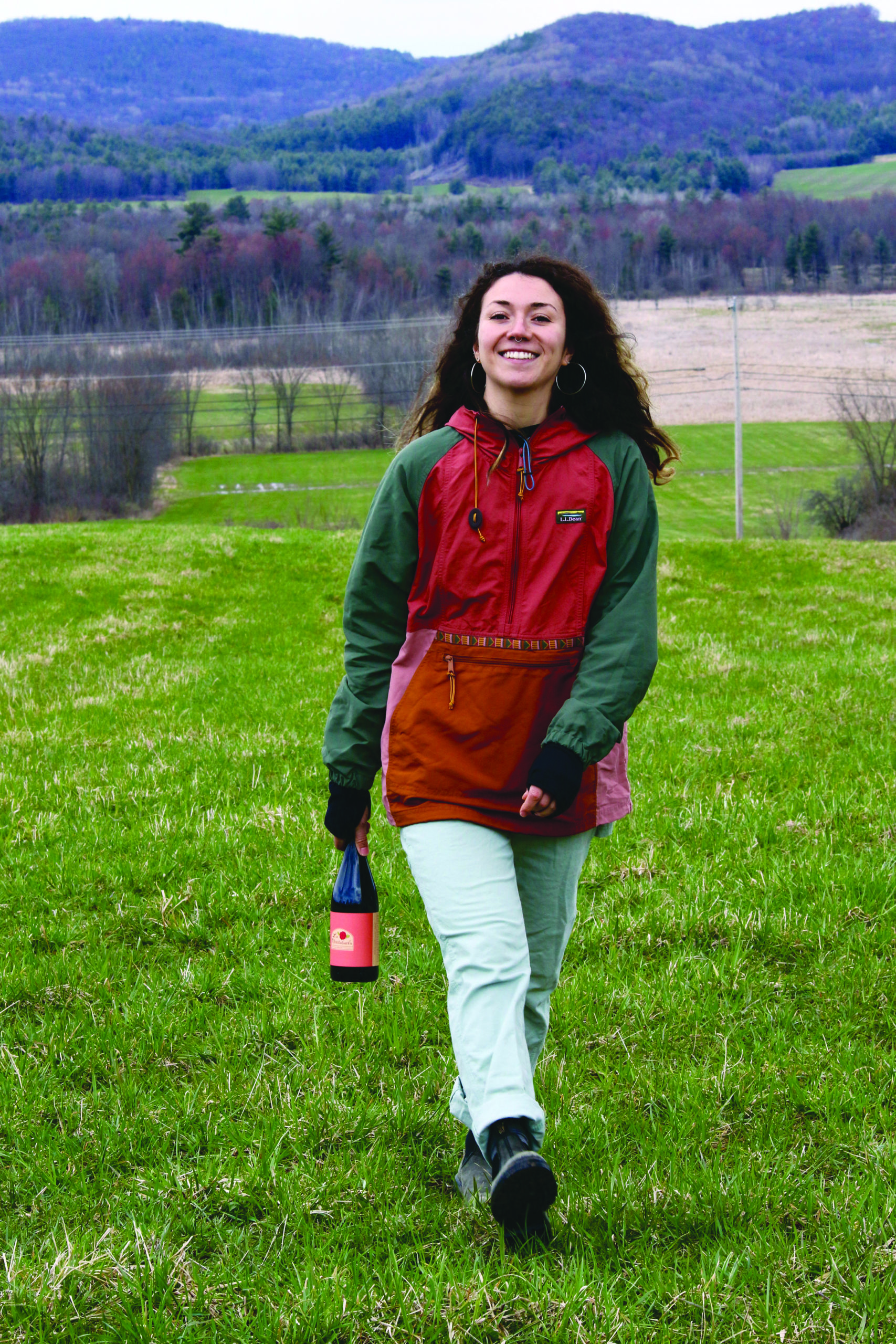 CAMILA CARRILLO HOLDS a bottle of her La Montañuela wine as she strides across the New Haven land she has purchased to grow her own vineyard. Not yet 30 years old, Carrillo has a decade of experience cultivating vines, harvesting grapes and making wines using natural winemaking and biodynamic methods.
Independent photo/Steve James

A second internship, this one in Argentina, was different but also a growth experience. Then a stint at a winery in Washington state, one in Australia and finally one in Italy. Amongst all those experiences, Carrillo met Deirdre Heekin, who owns the La Garagista winery, which is based in Barnard, Vt., and has a vineyard in West Addison. Heekin and her husband, Caleb Barber, have become mentors to Carrillo.

While learning the nuts and bolts of winemaking, Carrillo made decisions along the way about what kind of wine she wanted to create, how to cultivate the plants that would grow the grapes that would make her wine. She found that she gravitated toward “natural winemaking,” which uses organically grown fruit and foregoes additives.

“I’ve always had a deep connection to nature,” Carrillo said. “Natural wine and biodynamics — those things align with my beliefs.”

She also has a deep connection to her family. Born in the United States, Carrillo was raised for a number of years in the South American country of Colombia before moving back the U.S. and eventually Vermont. She named the label for her wine “La Montañuela” after the farm her grandfather started in Venezuela. She gave her most expensive wine, “Rocio,” her mother’s middle name.

Carrillo got a taste of leading her own operation after she harvested some grapes at a small plot of land in Hinesburg in 2019. The landowners were considering tearing out the vines.

“I told them I’d potentially take care of the land for you in exchange for the fruit,” Carrillo said. “They told me, ‘We want to be supportive of a young entrepreneur, just take care of the vines.’”

It was small enough that she could do all the plant maintenance and harvesting herself, and large enough that she would get enough fruit to make her own wines in batches big enough to bottle.

“It was the perfect size for me — a quarter of an acre.” Carrillo said.

Carrillo describes a good winemaker as observant, patient, creative and passionate, as well as willing to take risks.

“Some winemakers are very scientific, they can be very technical, whereas some people are very creative,” she said.

While Carrillo’s passion for wine and winemaking is obvious, her powers of observation and imagination are also clearly evident to anyone who is watching. For instance, she describes not just the physical labor, but the technique she uses when pruning grape vines.

“Pruning is very meditative but also very technical. You have to be trained.”

Her skills of observation pay off in the realm of biodynamic agriculture, which treats soil and plants as interrelated components of a unified system.

“In the spring, don’t mow around the vines early so you can see what is growing in the soil — that is important!” Carrillo said.

This gives the person tending the vineyard a chance to see what is growing naturally in the soil — what wants to grow in this particular patch of soil. For instance, Carrillo saw stinging nettles, which can control pests and diseases as well as promote growth.

At the La Garagista Winery and its vineyard in West Addison, where Carrillo works, she has seen plants growing among the vines that provide anti-fungal and ant-bacterial properties, so those are left to do their work, which benefits the vines and ultimately the wine.

“Nature knows what it needs, and it’s always sending you messages,” Carrillo said. “That can get lost when people are making wines traditionally — not really giving nature a chance to show you what it needs.”

Heekin, whom Carrillo describes as both “definitely creative” and endowed with a deep knowledge of biodynamics, describes it this way: “You can’t have a good wine if you don’t have a happy and healthy vineyard.”

Carrillo may be starting her career in Vermont winemaking at the right time. She said the wines made here have been produced with hybrid varieties of grapes, such as the Marquette, which is a mix of the Pinot Noir grape and other varieties. Connoisseurs in the past have looked down on such blends, but they have accepted, and in some cases embraced them now.

“Hybrids have been hated, made out to be this horrible thing,” Carrillo said. “But they can make really good wine. I’m so proud of what Vermont has done with hybrids.”

And some well-established winemaking regions are being pushed to hybrids, too, as global climate change is making some places in California and France less hospitable to their traditional grape varieties.

“When I start planting vines in New Haven I will plant all the hybrids I know and love,” Carrillo said.

Carrillo bought the property for her future vineyard, which sits off Route 17 between the villages of New Haven and Bristol, last year. In addition to planting vines, she plans to build a house there (she’s living nearby right now) and start a garden. At some point she may build the actual winery for creating the product. 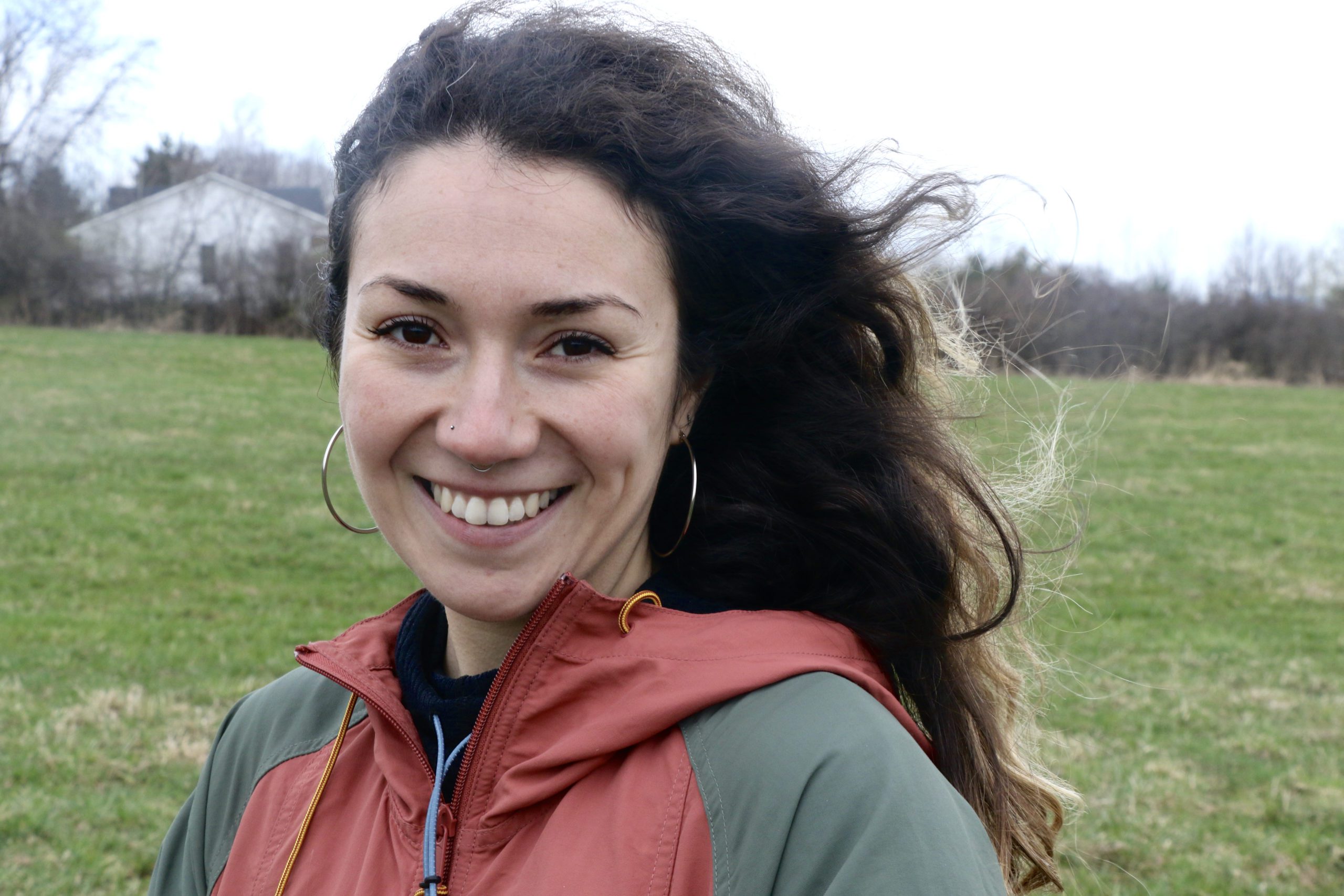 She has been hesitant to put in the grape vines until the house is built because she doesn’t want to disturb them if installation of a septic system ends up taking a different space than anticipated. She may put in a holding bed where the vines can get started before being moved to their final home on the property. She has enough space for four or five acres of vines.

“I know it’s going to happen, it just takes time,” she said.

While waiting on the grapes, Carrillo planted fruit trees last year — apple, pear, plum and peach — whose fruits could make it into some wines, too. But she would be happy to depend on other Addison County producers for some of the fruits, if for no other reason than to make the business more manageable. In this way she sounded like a more typical farmer.

“I want to be able to purchase fruit from growers so I don’t have to be running around,” she said. “I’d like to be able to take a vacation.”

And she’s given a lot of thought to other aspects of her winemaking business. In addition to focusing on farming responsibly, Carrillo said she’d like to provide educational opportunities, particularly to Black, indigenous and people of color who might not otherwise get the chance to learn about farming close up. Plus she wants to give back to those in the wine community who have helped her by mentoring younger people herself.

“It would be great to hire one full-timer, and a couple paid internships,” she said. “I want to keep it small enough to manage it and pay people properly.”

She notes that work in the vineyard during spring and summer is “very rough.” She sometimes has to carry a heavy backpack sprayer in heat that can be scorching. Then in the fall there is harvest. Carrillo starts to prune the vines — one by one — when they go dormant in late November. That carries on into the winter: “This January and February was way too cold,” she said.

Carrillo realizes that winemaking — not just creating the drink, but the whole process from soil to plant to glass — takes a lot of time and requires a demanding commitment.

“It’s a year round thing,” she said. “It becomes your baby, you have to be prepared for that.”