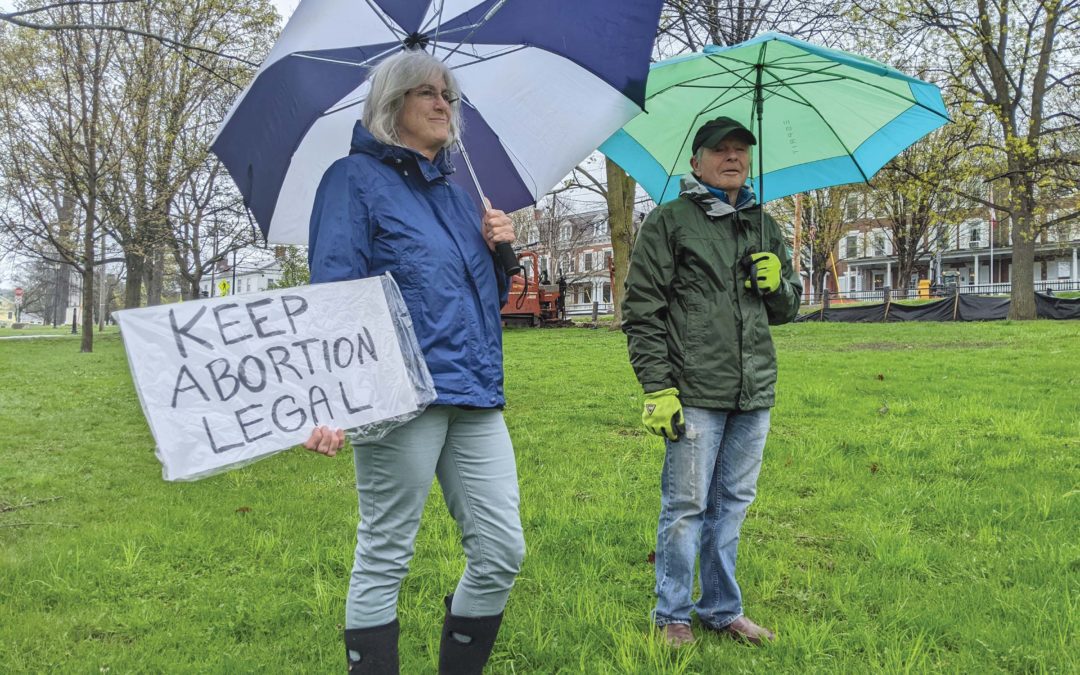 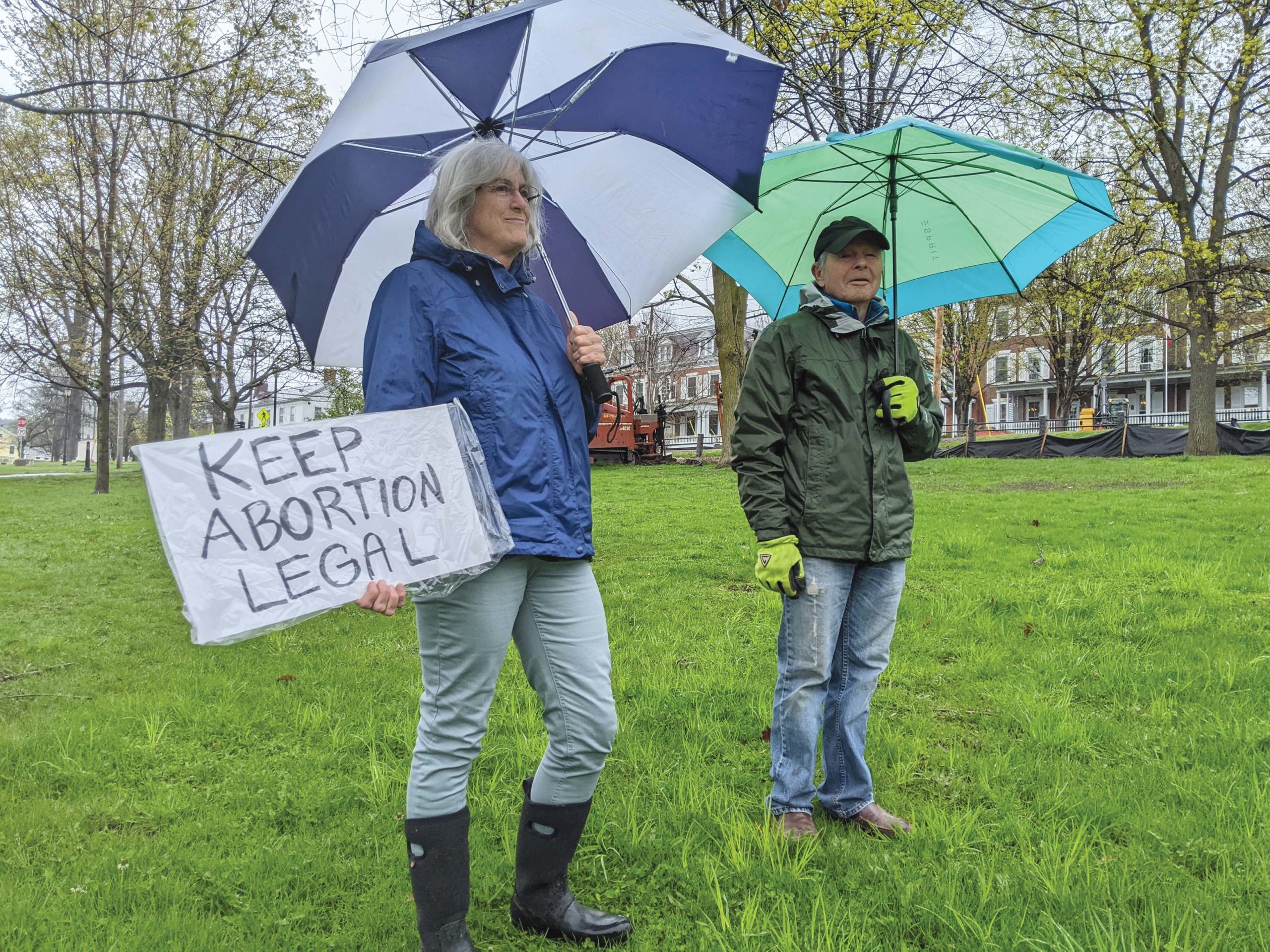 ONE OF ABOUT 100 attendees of a reproductive justice vigil held in downtown Middlebury Wednesday evening says it all with her handmade sign. Independent photo/Megan James
By John Flowers

MIDDLEBURY — Each of the four top Democrats vying to succeed U.S. Rep. Peter Welch as the state’s lone Congressional representative is working hard to craft a unique appeal to voters. But all four women are on the same page when it comes to reproductive rights: Repealing the landmark Roe v. Wade decision would represent a terrible setback, they assert.

“Roe is not the ceiling; Roe is the floor,” said Sianay Clifford, one of four candidates that spoke Tuesday evening at a Zoom forum sponsored by the Addison County Democrats. Clifford, Vermont Senate President Pro Tem Becca Balint, Lt. Gov. Molly Gray and state Sen. Kesha Ram Hinsdale were all passionate about the potential dismantling of Roe v. Wade.

And the prospect of the Supreme Court of the United States, or SCOTUS, taking such a tack gained strong momentum on Monday with the leak of a draft opinion by the nation’s highest court related to a Mississippi case that challenges Roe. According to the draft opinion — obtained by Politico — a majority of Supreme Court justices appear to have voted to overturn the 1973 landmark abortion precedent established in Roe v. Wade.

Chief Justice John Roberts  confirmed the authenticity of the leaked opinion, but adding it “does not represent a decision by the Court or the final position of any member on the issues in the case.” 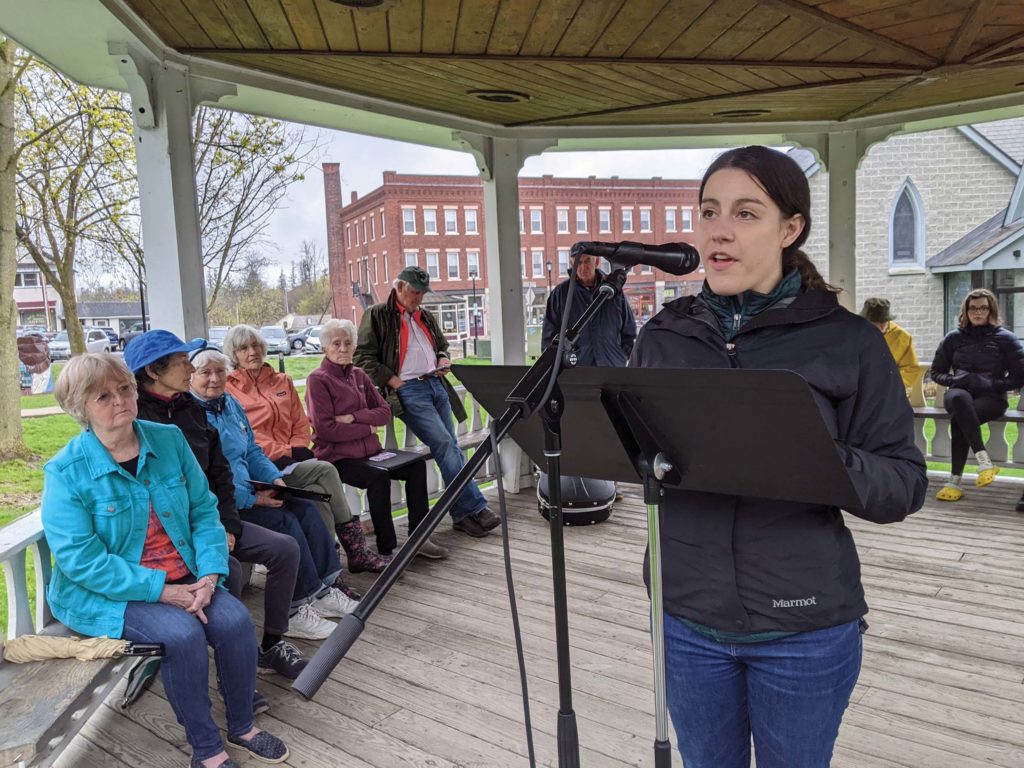 PASTOR ELIZABETH GLEICH of the Congregational Church of Middlebury spoke to some 100 people gathered on the town green Wednesday evening for a vigil for reproductive justice, in the wake of the leaked news of the supreme court’s ruling to overturn Roe v. Wade.
Independent photo/Megan James

Still, scores of Vermont officials — including Gov. Phil Scott — moved swiftly to condemn any attempt to quash a woman’s right to choose. The state Legislature in 2019 launched an effort to enshrine freedom of choice in the state Constitution, and as a result Vermonters will vote on Proposition 5 in November’s General Election.

In Tuesday’s online candidates forum, all four shared their views on a variety of issues — including inflation, the war in Ukraine, students debt and health care — but reproductive rights brought out particularly strong opinions.

“Roe is not aspirational; Roe is the bare minimum,” Clifford said. The leaked SCOTUS opinion “is a real attack on working people, on people without access to comprehensive excellent health care, and we continue to make that care impossible to get.”

Clifford lamented the lack of federal action on the Women’s Health Protection Act and the EACH Act, both of which would support a woman’s right to chose.

She added the recent appointment of Supreme Court Justice Amy Coney Barrett could be seen as a further blow to the safeguarding of woman’s reproductive rights.

“We’ve just been waiting and hoping that we won’t see this (SCOTUS) ruling — and we have,” she said. “This is not a moment of deliberation; this has to be a moment for action.”

Balint hailed the Vermont Legislature’s proactive efforts to preserve the abortion option in the Green Mountain State. She added leaders of other states are looking at Vermont as a model.

“We are very lucky to be in Vermont at this moment, because there were many of us in the Legislature who thought really carefully about this starting five years ago,” Balint said. “We put into place here in Vermont a codification of Roe in our Vermont statute, and went a step further and knew we had to enshrine it directly in our Constitution. I’m very proud of that work that we did. I know that Vermont has become a beacon of hope for so many women around the country because of the work that we’ve done here, and I know many legislators around the nation who are trying to fight back against this news that we’ve heard, looking to us and saying, ‘What you did is what we also need to do.’”

If elected to the U.S. House, Balint promised to fight to codify Roe in federal law.

“That’s not going to be an easy undertaking, because we still have to deal with the filibuster in the U.S. Senate, and I support abolishing the filibuster for that reason,” she said. “We have to make sure that regardless of where anyone lives, they have the ability to have control over their own bodies and those decisions should only be made between a woman, her family and her medical practitioner.”

Gray, too, is pleased that Vermont has chosen to be proactive in strengthening state rights on abortion. She urged other states to follow suit.

“Regardless of what happens with the Supreme Court, states can add more constitutional protections, not less,” she said. “And that’s what we’re doing here in Vermont, and that’s so incredibly important. I’ve been proud to advocate for that as lieutenant governor.” 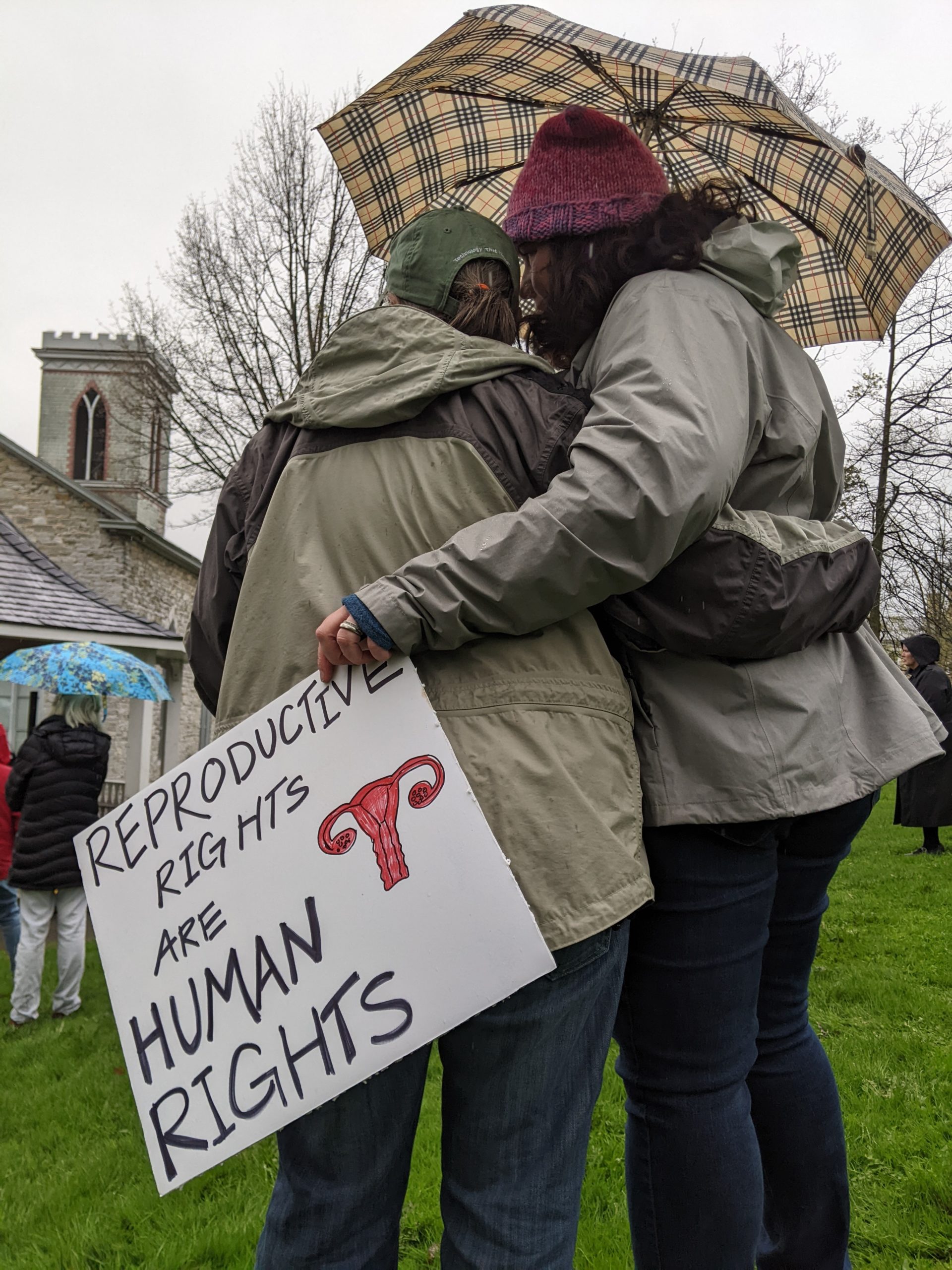 AMY MASON AND Jess Sabick embrace at a Middlebury vigil Wednesday evening in response to the news that the Supreme Court could overturn Roe v. Wade.
Independent photo/Megan James

Hinsdale recounted her anguish-filled, personal experience securing an abortion in Washington, D.C., while she was in college.

“There were throngs of anti-abortion protesters pulling at my clothes and praying in my ear and a worker from the (Planned Parenthood) clinic came out, grabbed my arm and said, ‘I’ve got you.’ And that’s what we need to do for Vermonters and people around the country, is look at them, hold onto them, and say, ‘I’ve got you,’ during one of the toughest moments we’ve faced in the better part of a century,” she said.

Hinsdale added, “I don’t know where I would be today — I certainly wouldn’t be before you here today as the first woman of color in the state Senate and a candidate for Congress — if I wasn’t able to access that all-important right to abortion care so many years ago.”

She called upon Congress to “remove any institutional barrier to securing our rights — not just to abortion access, but the right to vote, and enshrine as many liberties as we possibly can.”

Hinsdale believes striking down Roe v. Wade could be the first of many rights that might topple at the hands of conservatives on the Supreme Court and potentially the U.S. House and Senate beginning next year.

“It is not just a decision that removes access to abortion care, it removes access to contraceptive care and reproductive health care,” she said. “It also puts in jeopardy settled law around the privacy and rights of LGBTQ Americans.”

Welch, who is running for the U.S. Senate seat to be vacated by Sen. Patrick Leahy, issued his own statement about the leaked SCOTUS opinion.

“In overturning Roe, the court will profoundly restrict the Constitutional rights of women,” he said. “Twenty-six states are likely to ban abortion outright when this decision becomes final in the coming months, leaving millions without access to safe and necessary medical care.”