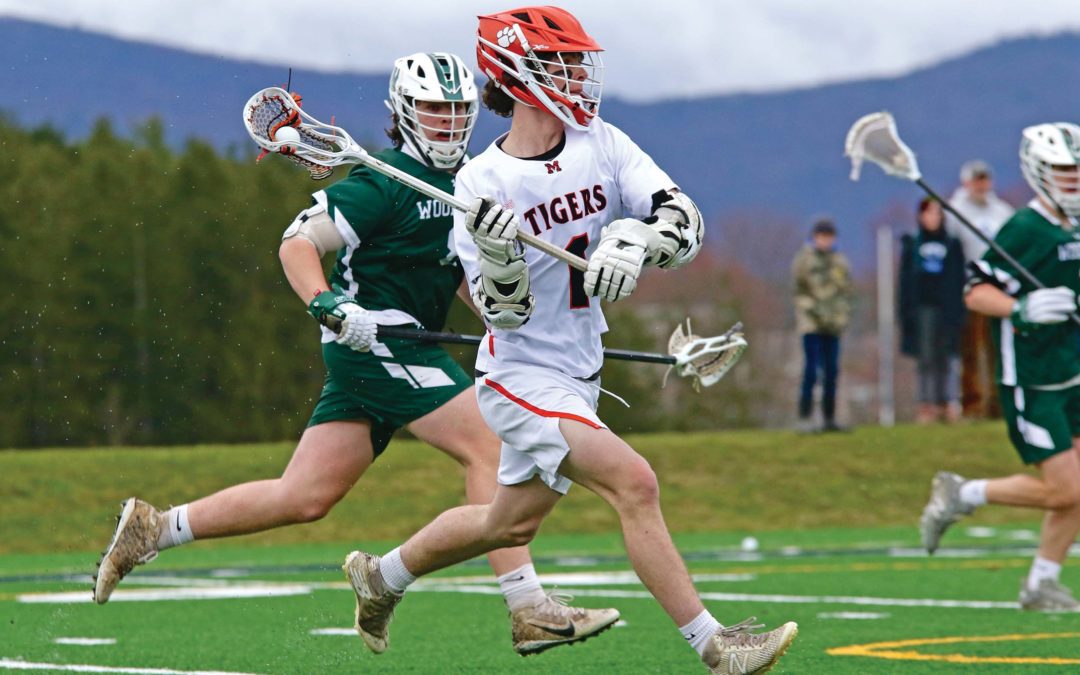 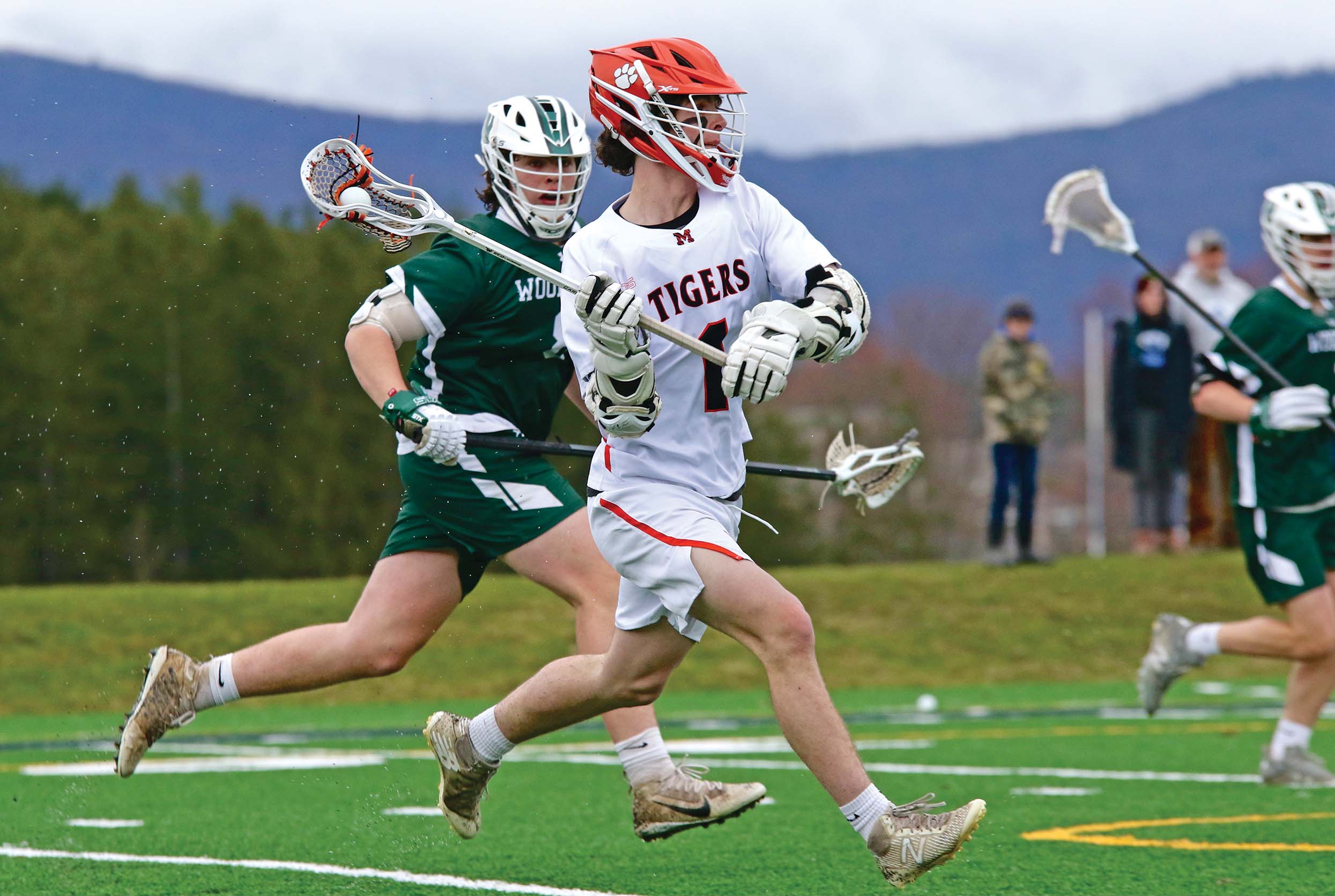 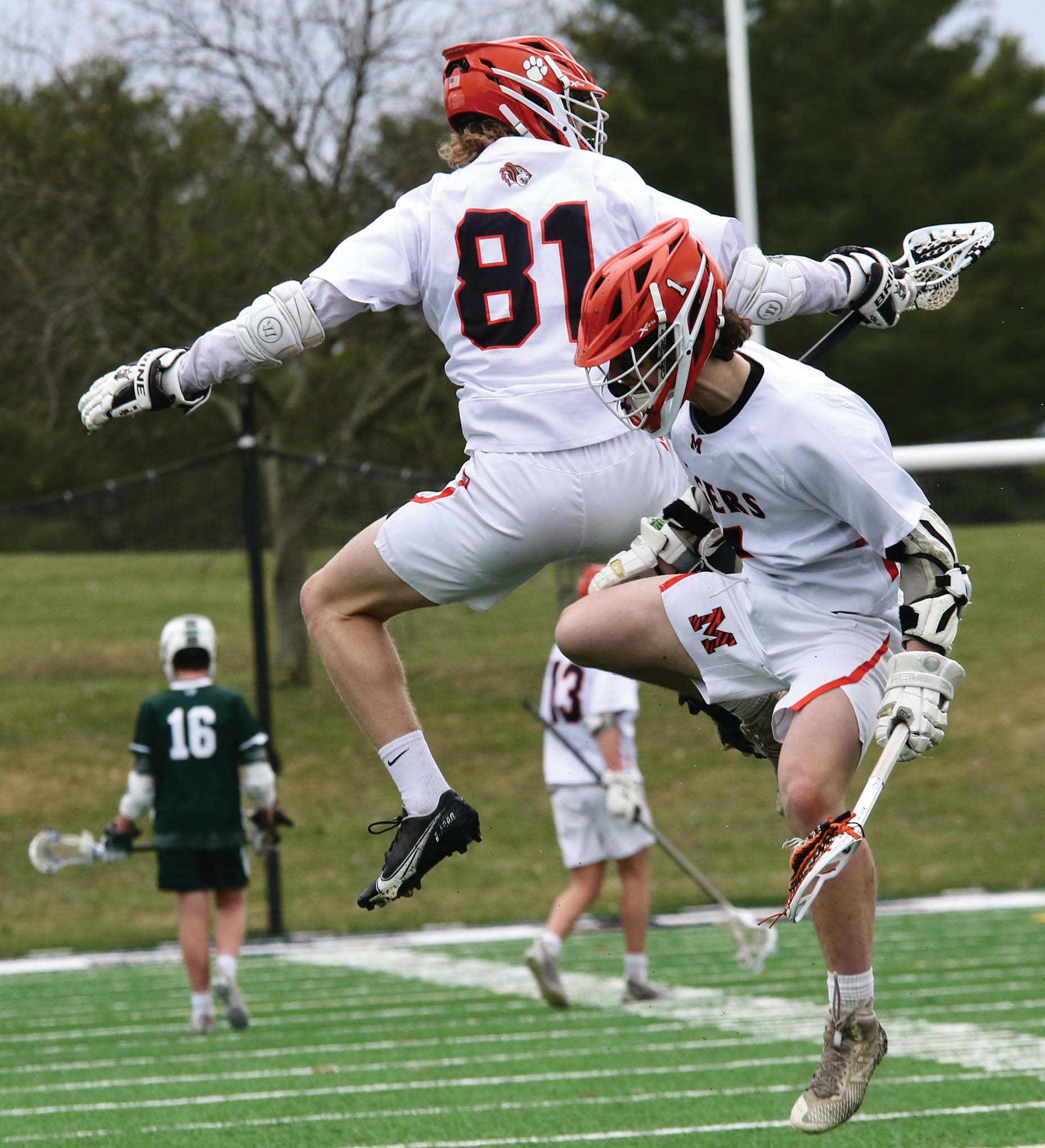 SOPHOMORES JACKSON GILLETT, No. 81, and Toby Draper celebrate one of Draper’s six goals, one assisted by Gillett, during the Tigers’ 12-6 win at Middlebury College on Saturday.
Independent photo/Steve James

In improving their record to 2-0, the Tigers never trailed and controlled play at both ends of the field. Offensively, sophomore Toby Draper led the way with six goals and two assists, junior Owen Lawton chipped in two goals and four assists, and sophomore Brady McDonough scored twice.

Coach Matt Rizzo was happy with the offensive output — not only the ball movement, but also the fact that four of the Tigers’ goals came on the fast break.

“One of our mantras this year is we’ve got to get to 12 goals, which we did today. And we need more transition goals. We can’t just score in six-v-six,” Rizzo said. “And we did both of those today, so we moved the ball really well. And those transition goals are just critical for us.”

“They’re skilled, and we had a couple strategies in play to try to mitigate Keaton Piconi. We shut him off quite a bit,” Rizzo said. “We practiced it. The kids worked hard and executed it pretty well today.”

Junior goalie Kegan Brown made 11 saves in his second varsity start, and continued to improve his work clearing the ball.

“He did great today,” Rizzo said. “He did everything we asked of him. He’s great down low. He had a couple quality saves.”

If there was a downside, the game at times looked like a flag-tossing exhibition occasionally interrupted by lacrosse. Both teams were routinely assessed for a series of infractions. 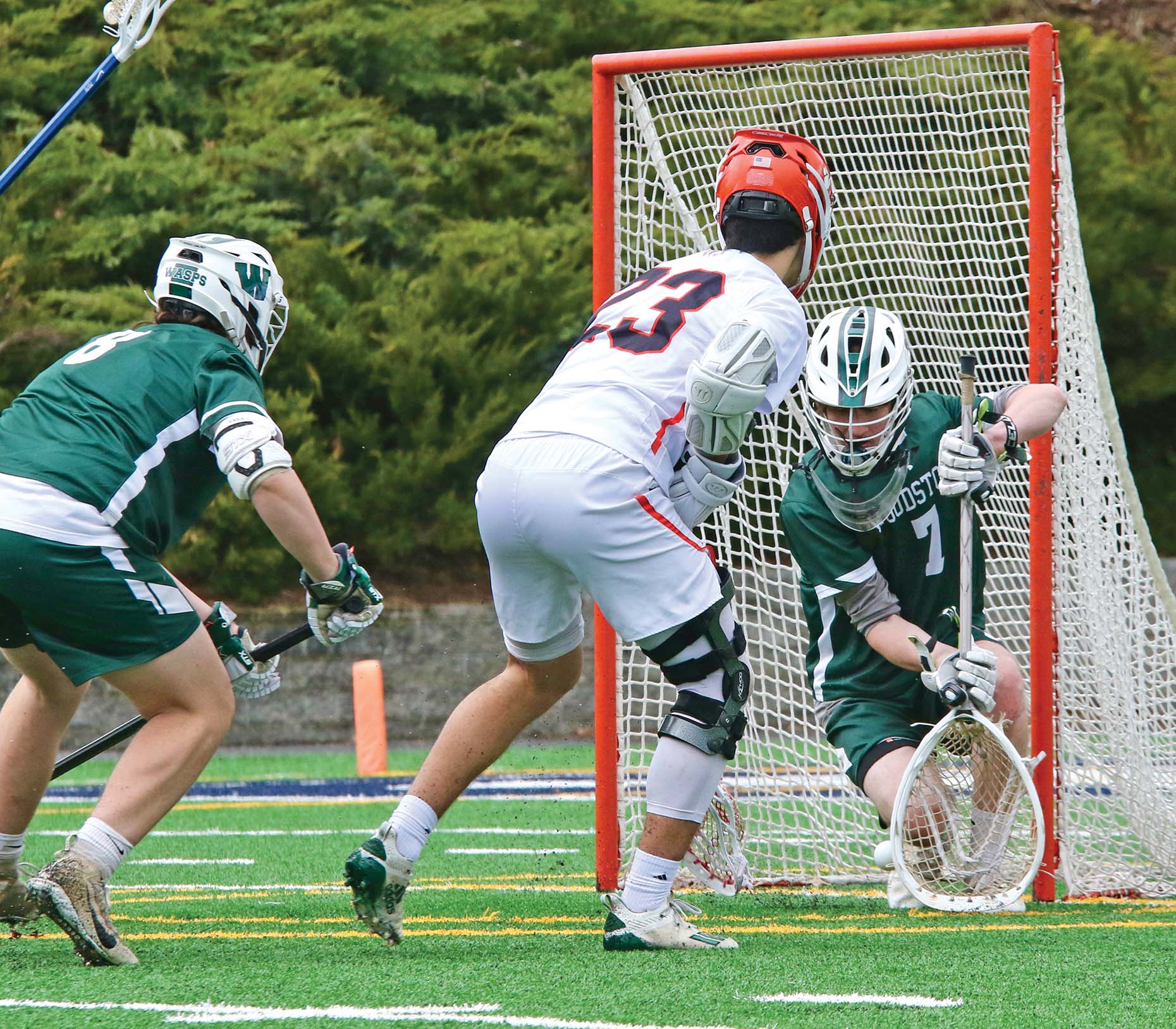 THE TIGER BOYS’ lacrosse team was effective in transition in Saturday’s 12-6 home win over Woodstock, but Wasp goalie Ryan Runstein made a kick save on MUHS junior Owen Lawton on this fast break.
Independent photo/Steve James

“There were too many penalties. In some ways we were lucky to put up 12 goals with as many penalties as we had,” Rizzo said. “The refs called it real tight, and we have to be able to adjust.”

The Tigers took an early lead when McDonough spun and scooped home a Lawton feed. Griffin Piconi equalized at 7:26, just as the first MUHS penalty was expiring. Goals by Draper and Wasp middie Corey White followed, and the first period ended at 2-2. 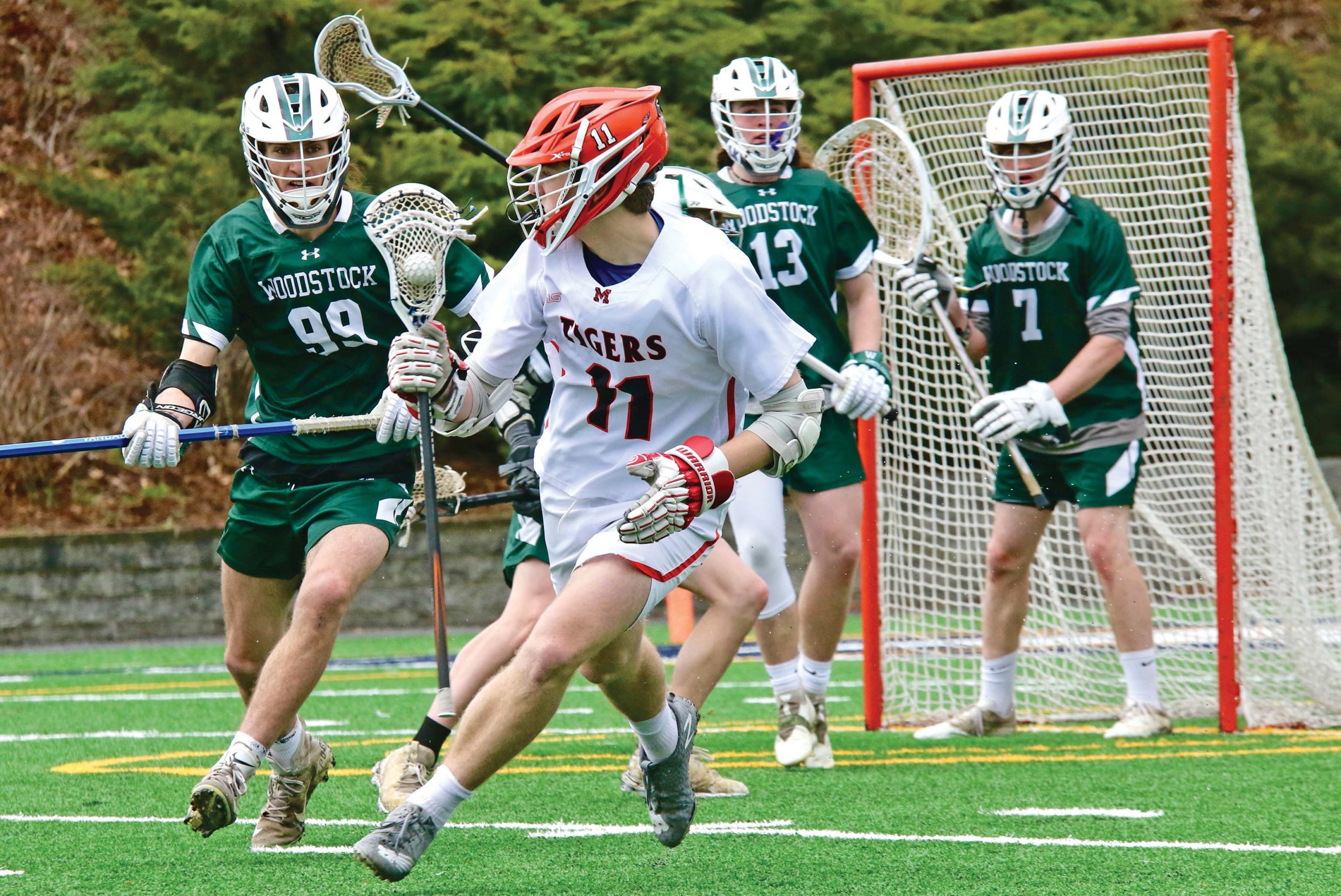 A two-minute locked-in penalty for the Wasps opened the second period, and Draper scored quickly to make it 3-2. Three straight Tiger fouls stalled their momentum briefly, but two minutes later junior middie Charlie Stone set up Draper in transition for a man-down strike, and it was 4-2.

Brown then made a big stop on Keaton Piconi, which Wasp goalie Ryan Runstein matched at the other end by denying Draper on a fast break. But at 5:42, Draper deposited a feed from senior middie Eddie Hodde to make it 5-2. Both Piconis found the net before halftime, with Lawton, from Draper, answering for MUHS, and the Tigers led by 6-4 entering the second half. 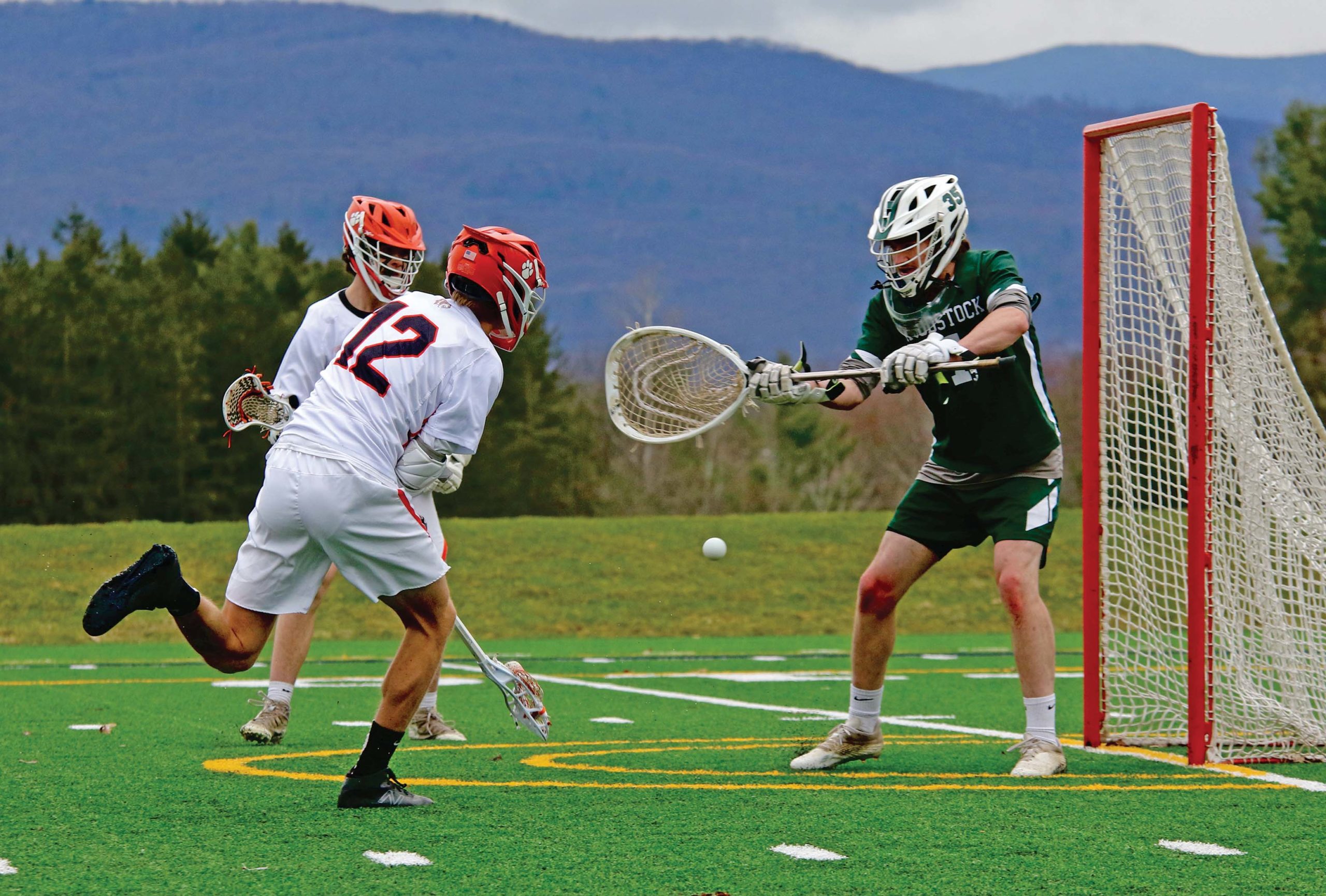 There, they slowly pulled away. Junior middie Willem Berry and Draper, from sophomore middie Jackson Gillette, added goals in the third quarter, and McDonough, from Lawton, made it 9-4 to open the fourth period, and the Tigers were firmly in charge. Sophomore Zach Jette added a late goal for MUHS.

The Tigers are next scheduled to host St. Albans on Monday, assuming conditions on Fucile Field finally cooperate. Rizzo is looking forward to seeing what they can accomplish.