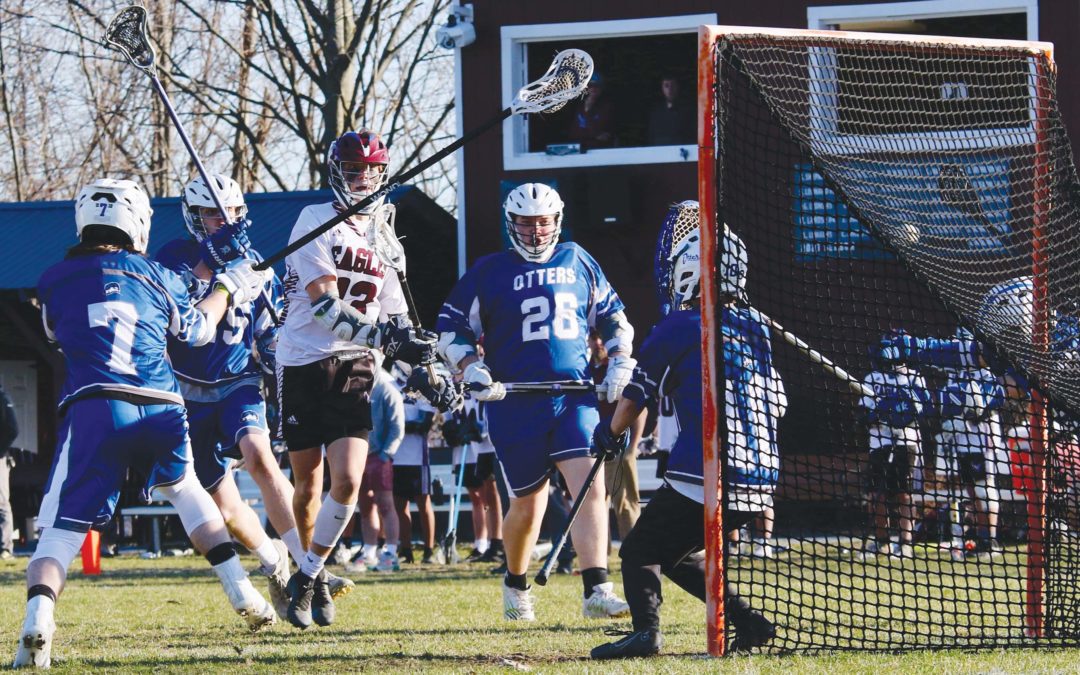 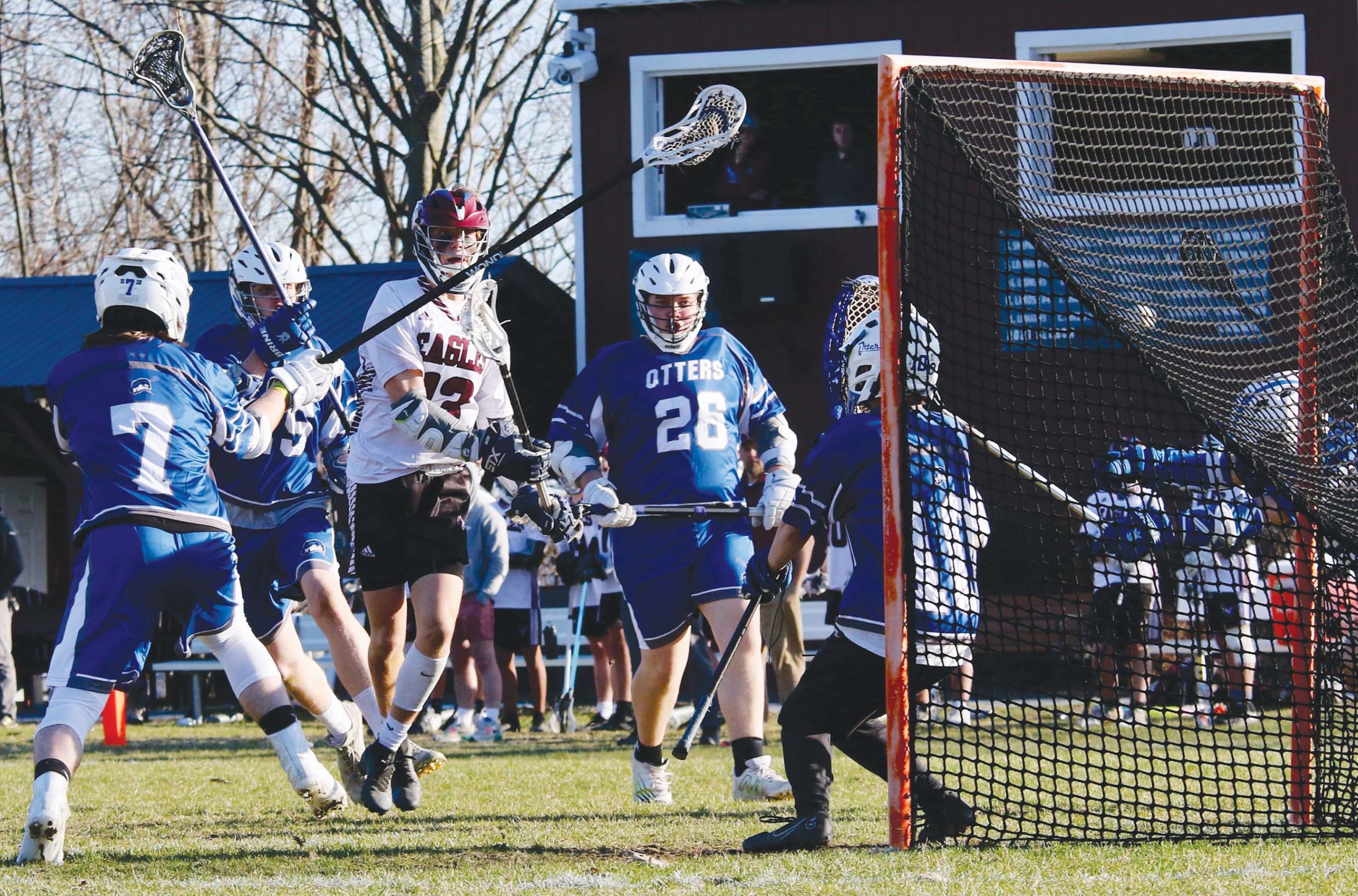 BRISTOL — The Mount Abraham-Vergennes cooperative boys’ lacrosse team spotted Otter Valley an early lead on Tuesday in Bristol and also had to hold off a late Otter rally, but the Eagles ultimately prevailed, 11-8.

Both teams showed flashes of quality play in a game that also at times understandably looked like one of the first times they were able to play on a full field due to uncooperative spring weather.

Eagle Coach Ed Cook acknowledged especially with the field lumpy and the ball bouncing unpredictably, the game at times resembled field hockey as multiple players from both teams battled for elusive ground balls.

But players on both teams also scored pretty goals, and their defenses made attackers work hard to get good looks at goal.

The Eagles’ best two periods were the second and third, when combined they outscored the Otters, 7-2, after falling behind by 3-1 after one quarter.

“My attack really drives the offense,” Cook said. “(Sophomores) Sawyer Leonard and Andrew Nolan at midfield, if they get the ball up there and get to Henry (Anderson), Sawyer Shepard and Noah Ladeau, we can make really nice things happen. Once we settled down, once we put the ball in the back of the net, we looked good.”

OV Coach Matt Clark said he was pleased with the Otters’ effort.

“We’ve got a lot to clean up, a lot of small stuff. But they came out, same as last year, and they fought and they worked hard, and that’s all you can ever ask for,” he said. “Hopefully we’ll clean up the small mistakes and flip the score.” 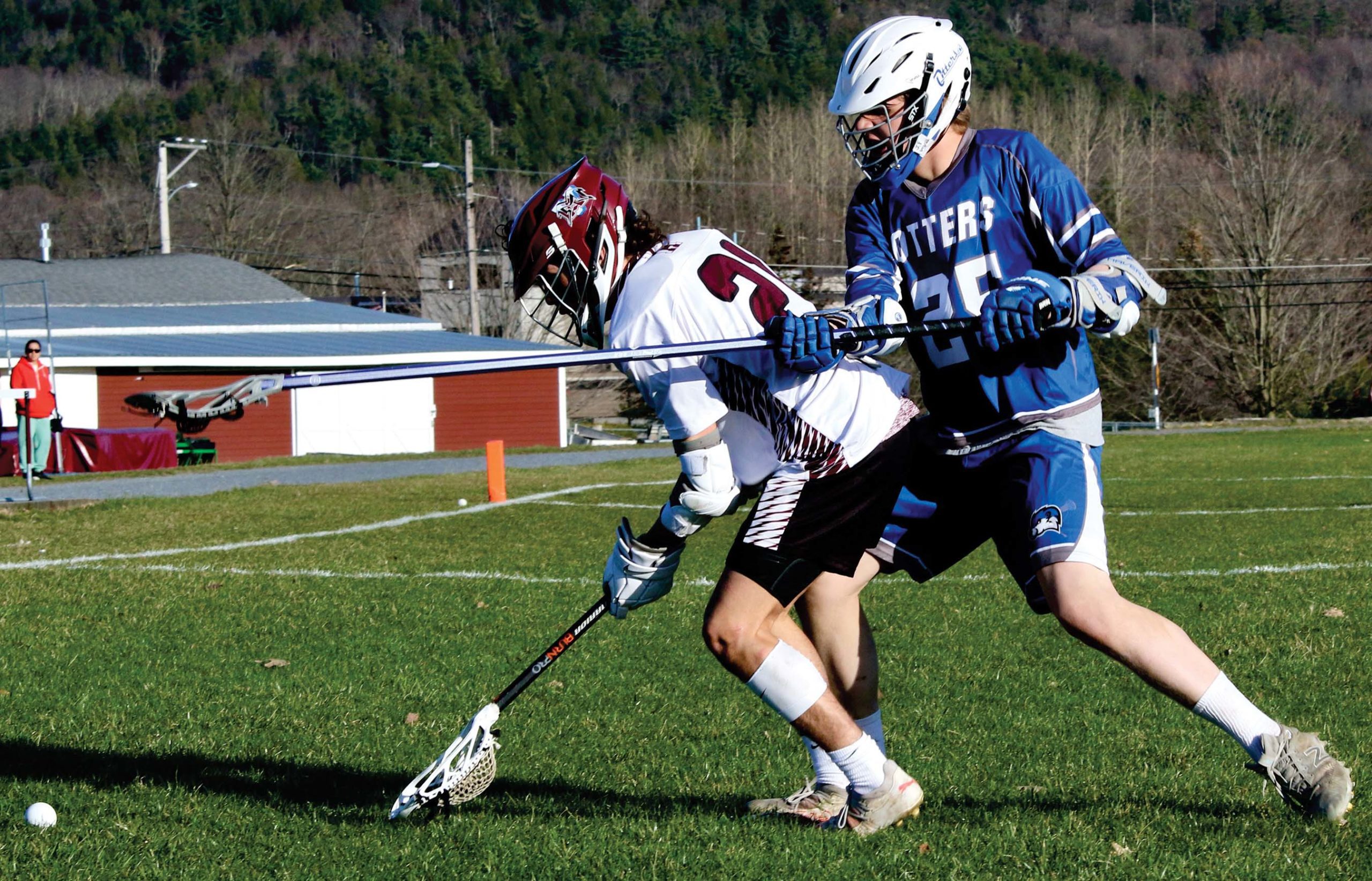 The game started promisingly for Clark’s Otters. Junior middie Thomas Politano whipped home a shot from the right side 93 seconds in, and with 3:04 gone senior attacker Hayden Bernhardt powered from behind the net and finished high to make it 2-0.

At 6:00 Bernhardt cut in front of the goal and converted a feed from Evan Thomas, and it was 3-0. Eagle sophomore goalie Moises Otero made a big stop on Bernhardt a couple minutes later, and Anderson, a junior, gave the Eagles momentum by cutting in from the left and finding the far side just before the horn sounded to end the first period.

OV senior goalie Daniel O’Brien made two stops on Shepard (like Ladeau, a sophomore) to open the second, but couldn’t prevent Anderson from picking the lower left corner at 10:34.

The defenses settled in after that, and both teams killed off man-down situations over the next eight minutes. For Mount Abe, senior Jade Edwards switched onto Bernhardt and made his life more difficult, and sophomores Jordan Schroeder and Ben MacDonald began to find their footing.

Senior Dom Davis and sophomores Sawyer Tinsman and Aiden Wade helped hold the fort for OV until Nolan broke loose out front and made it 3-3 late in the second period.

As the second half opened a penalty finally cost one of the teams, as Anderson scored in the second minute. OV then mounted a brief surge, with Politano bouncing one home from long range and senior Nicholas Parker scoring a sweet transition goal at 9:12 to put OV up by 5-4.

But after O’Brien stopped Shepard from point blank, the Eagles then took charge. The Eagles tied the score on the play of the game. Edwards won a ground ball on the left side in the back and hit Shepard in full stride cutting on the right at midfield. Shepard dodged one defender and went in alone to convert.

Then the Eagles closed the period with three goals in the final 2:18. Billy Lyons cut from left to right and found the lower left corner, and two perfectly executed transition strikes followed. 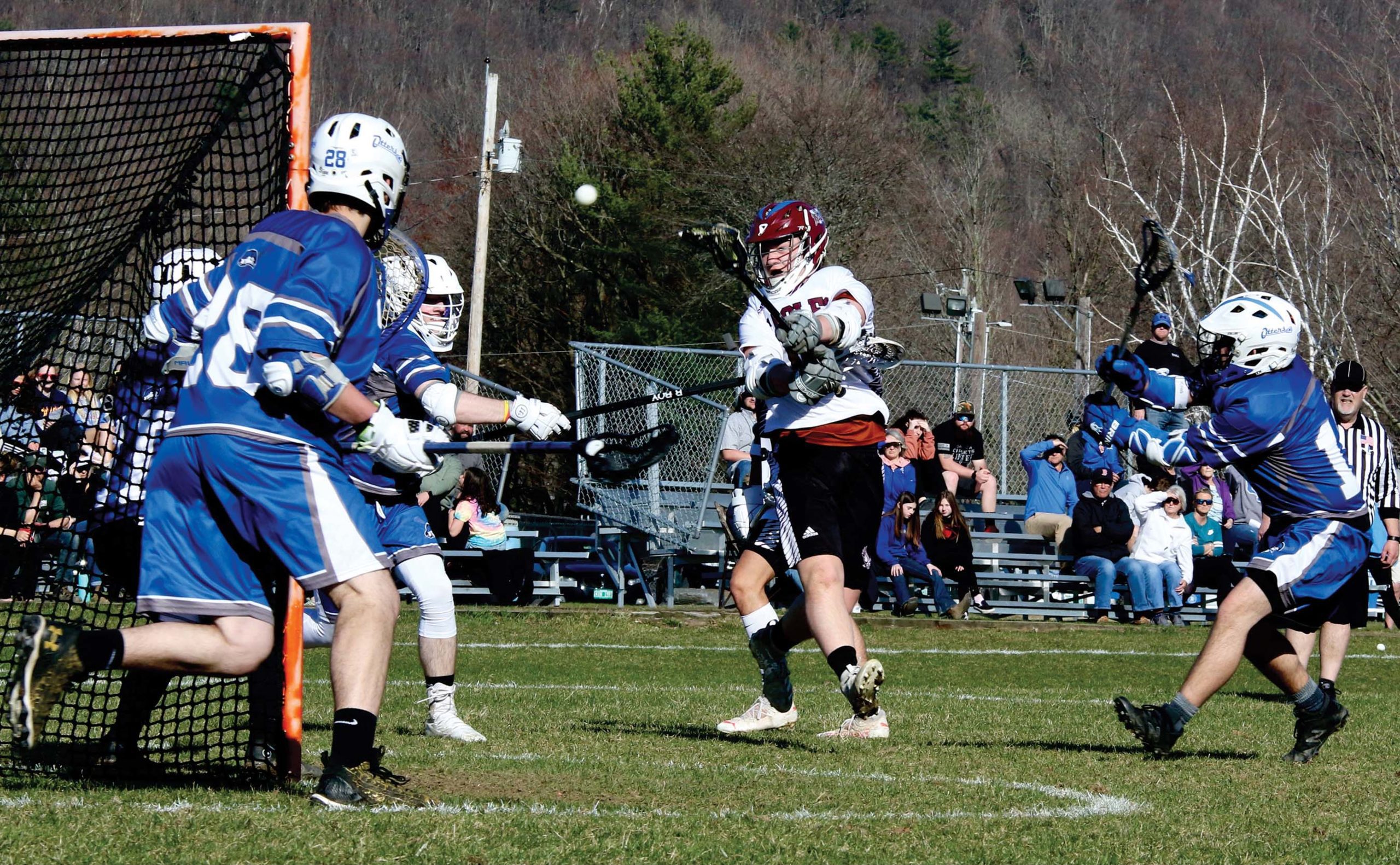 EAGLE SOPHOMORE ANDREW Nolan tied the score with this goal late in the second quarter of Tuesday’s boys’ lax game between host Mount Abraham-Vergennes and OVUHS. The Eagles held off the Otters, 11-8.
Independent photo/Steve James

Ladeau won a groundball on the right side and hit Nolan streaking out front for the first, and Shepard found Anderson on a similar play in the final minute to make it 8-5 after three.

Shepard struck from long range to open the fourth quarter, and after a strong solo effort by OV’s Thomas made it 9-6, Ladeau answered for Mount Abe, and it was 10-6 halfway through the period.

OV mounted one last surge. Politano picked the near side from the right, and Bernhardt rolled from behind the net at 2:18 to make it 10-8. OV won the faceoff, but Thomas shot wide, and Nolan scooped the groundball to all but end the Otters’ chances. Anderson iced the cake with his fifth goal in the final seconds.

Clark described the afternoon as a typical Mount Abe-OV clash.

“They’re always back and forth,” he said. “We had our little comeback, but we fell a little short at the end. But it was a good game.”

Given his team’s work ethic, Clark expects the Otters to improve.

Cook said he respects the OV program and was happy to see a competitive game.

He also expects his young team to continue to get better, thanks in part to its good chemistry as well as improving skills.

“I have really nice kids. They all really like each other,” Cook said. “And it shows on the field. They really share the ball.”