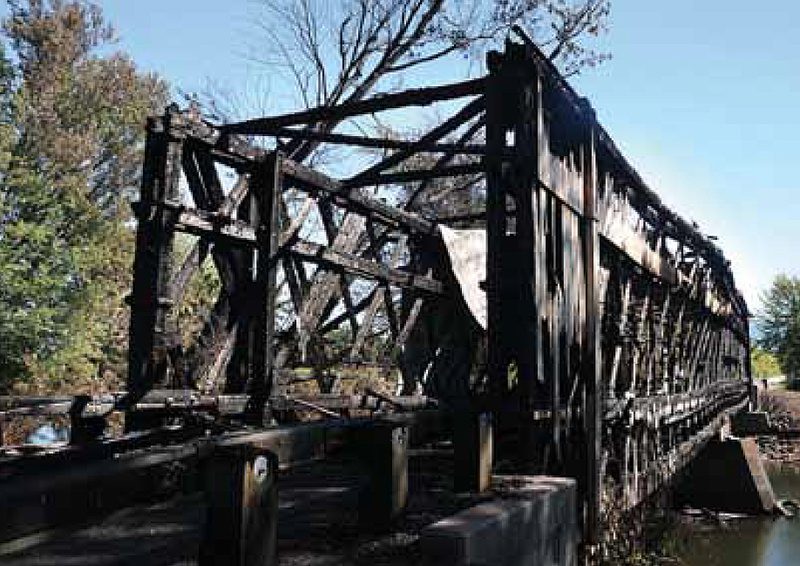 After a 2016 fire burned the 150-year-old Station Bridge over Otter Creek the only thing left was charred timbers. The bridge, which connects Salisbury and Cornwall, may be replaced with a new covered bridge.
Independent file
photo/Trent Campbell

CORNWALL/SALISBURY — Cornwall and Salisbury residents will soon be asked to weigh in on replacement options for the historic Station Covered Bridge that once connected the two towns across the Otter Creek, via Creek Road (in Salisbury) and Swamp Road (in Cornwall).

It was on Sept. 10, 2016, that the 154-foot-long covered span was destroyed by a fire that investigators initially deemed suspicious. But Vermont State Police have yet to charge a suspect in connection with the blaze, which some have simply chalked up to spontaneous combustion.

Loss of the bridge forced travelers to seek alternative routes until a temporary span was installed. That no-frills, interim span continues to accommodate roughly 540 vehicles per day. While motorists were thrown a life preserver, the same can’t be said for scores of bats that once inhabited the old Station Bridge, built in 1865. The structure underwent major renovations in 2008.

Six years have now gone by without a permanent replacement for the Station Bridge.

But that’s about to change.

The Vermont Agency of Transportation (VTrans) in 2021 completed an engineering study of the Station Bridge site that included design criteria for possible replacement structures. The study boiled the options down to three: A new conventional steel-beam bridge, a new truss bridge, or a new covered bridge.

VTrans officials are asking Salisbury and Cornwall officials to pick one of the options, for which the state will cover 90% of the costs. Each town will be responsible for 5% of the debt. And if the two towns can agree on a choice before the end of this month, the new bridge will get on VTrans’s 2025 construction schedule. Any delay in that timetable would push the project out farther, according to Cornwall Selectboard Vice Chair John Roberts.

Feeling the urgency, the towns and VTrans will hold a Zoom meeting on Thursday, April 7, to further discuss the trio of bridge replacement options and accept input from the public, the main arbiter on what kind of new span will be constructed on the old Station Bridge spot. Roberts said the towns will ask their citizens to state their preference on a survey that will soon be sent to all local addresses.

So what happens if Cornwall residents pick one option and their Salisbury neighbors embrace another?

“I guess each selectboard will pick one member to meet in the middle of the (temporary) bridge and flip a coin,” he quipped.

The real solution to such a dilemma will require further talks between both boards, Roberts acknowledged. And the survey, officials noted, is non-binding.

“We’d have to go back to the Cornwall selectboard and do some rethinking,” Salisbury selectboard Chair Paul Vaczy said, adding, “We’ve had very good collaboration (on the project).”

VTrans officials provided locals with basic information on the three replacement options on Dec. 16, 2021. Here’s an overview of each option:

It should be noted the overall cost, and local share, would increase substantially for each of the three options if the towns were to insist on maintaining a temporary bridge during what’s expected to be eight months of construction. The estimates provided above reflect closure of Swamp and Creek roads at the bridge site while work is being done, with a local detour. The shortest detour, according to VTrans, is 13.9 miles, end-to-end. Starting in Salisbury, it would follow Creek Road to Dewey Road, Old Jerusalem Road, Leicester Whiting Road, Route 30 North, to Swamp Road.

“We as a selectboard, and I think Salisbury agrees, believe that if we could do it without the temporary bridge it’s a better option, as far as taxpayers are concerned,” said Cornwall Road Commissioner Brian Kemp. 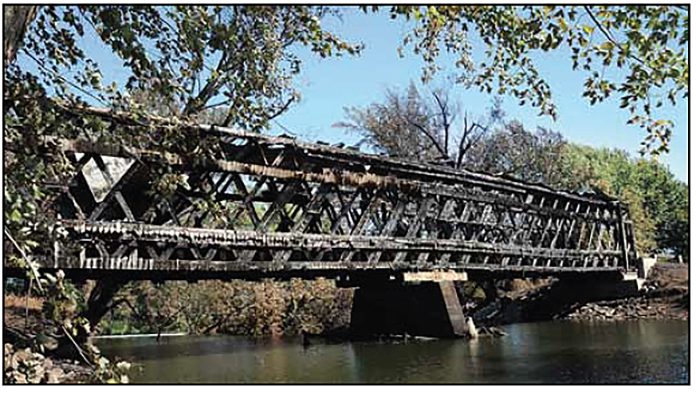 The remains of the Station Bridge after a September 2016 fire.
Independent file photo/Trent Campbell

Of course the local 5% share shouldn’t be a financial strain for either town. That’s because both Cornwall and Salisbury had insured the Station Bridge well prior to its destruction. In Cornwall’s case, Roberts said the insurer is obligated to pay up to $750,000 of the town’s replacement burden — which of course won’t come close to that figure, given the state’s promise of 90% funding.

Both towns want to ensure the new span doesn’t embolden drivers of large rigs to flout weight and size limits for vehicles traveling to and over the bridge. Cornwall’s Swamp Road is currently forbidden to vehicles weighing more than 12,000 pounds and/or more than eight feet wide.

Roberts explained Swamp Road was installed during the eighteenth century, with a base of logs through Cedar Swamp.

“Over time, (the road) shifts and sinks,” Roberts noted, “It’s not suitable for heavy traffic.”

But road postings have failed to dissuade some drivers over the years who have proceeded to the Station Bridge and damaged it trying to get a large vehicle or piece of equipment through its single, 12-foot-wide lane.

Kemp noted the town recently invested considerable funds in repairs to Swamp Road, and he doesn’t want to see that upgrade undone by an onslaught of heavy vehicles emboldened by a sturdier bridge.

“My concern as road commissioner is the structural integrity of our road approaching the bridge from Route 30, through the swamp,” he said. “I don’t want to put something there that’s going to open us up to the vulnerability of a lot of heavy traffic, using that as a shortcut to East Middlebury or Salisbury.”

Roberts said he’s heard a lot support thus far for installing a new covered bridge. And if that becomes the majority choice, local officials want to ensure its longevity.

“If we build another covered bridge, we need to get electrical power (for security cameras) to it and probably a fire suppression system built into it,” he said.

While a new wooden covered bridge would be an homage to Vermont’s transportation heritage and could spur tourism, town officials realize these structures carry special — and sometimes costly — maintenance costs. Roberts said perhaps a new covered span could be made more durable with 21st-century engineering and sturdy infrastructure. He hopes to hear more specifics on maintenance at the April 7 Zoom meeting, slated for 7 p.m. Log on to tinyurl.com/mr3fdmm5 for details on how to attend.