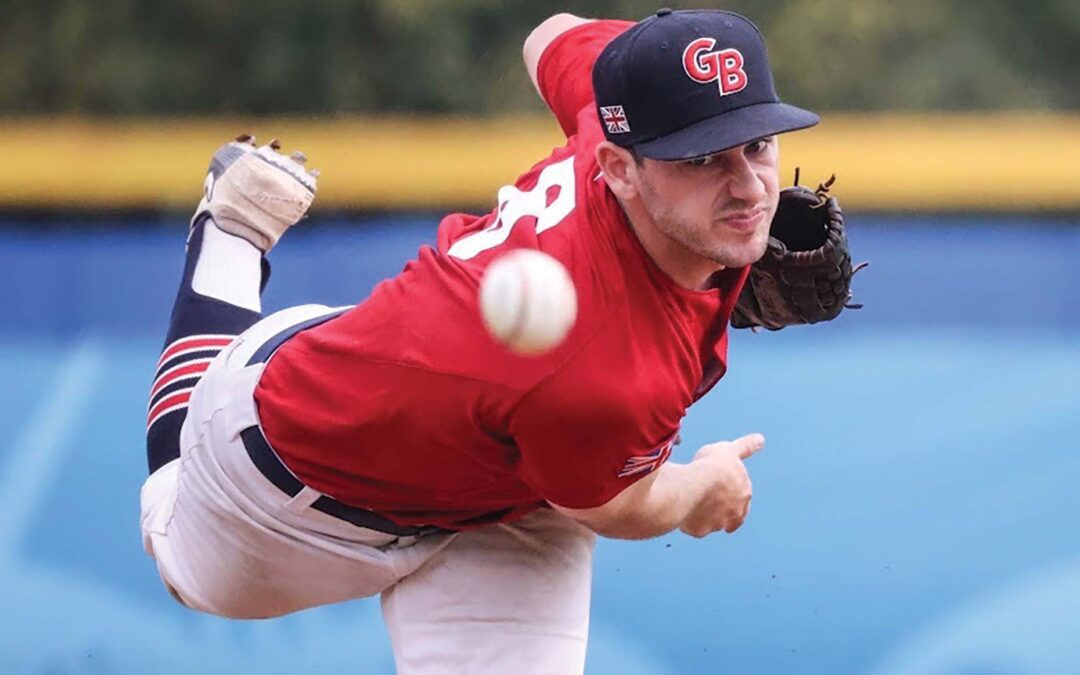 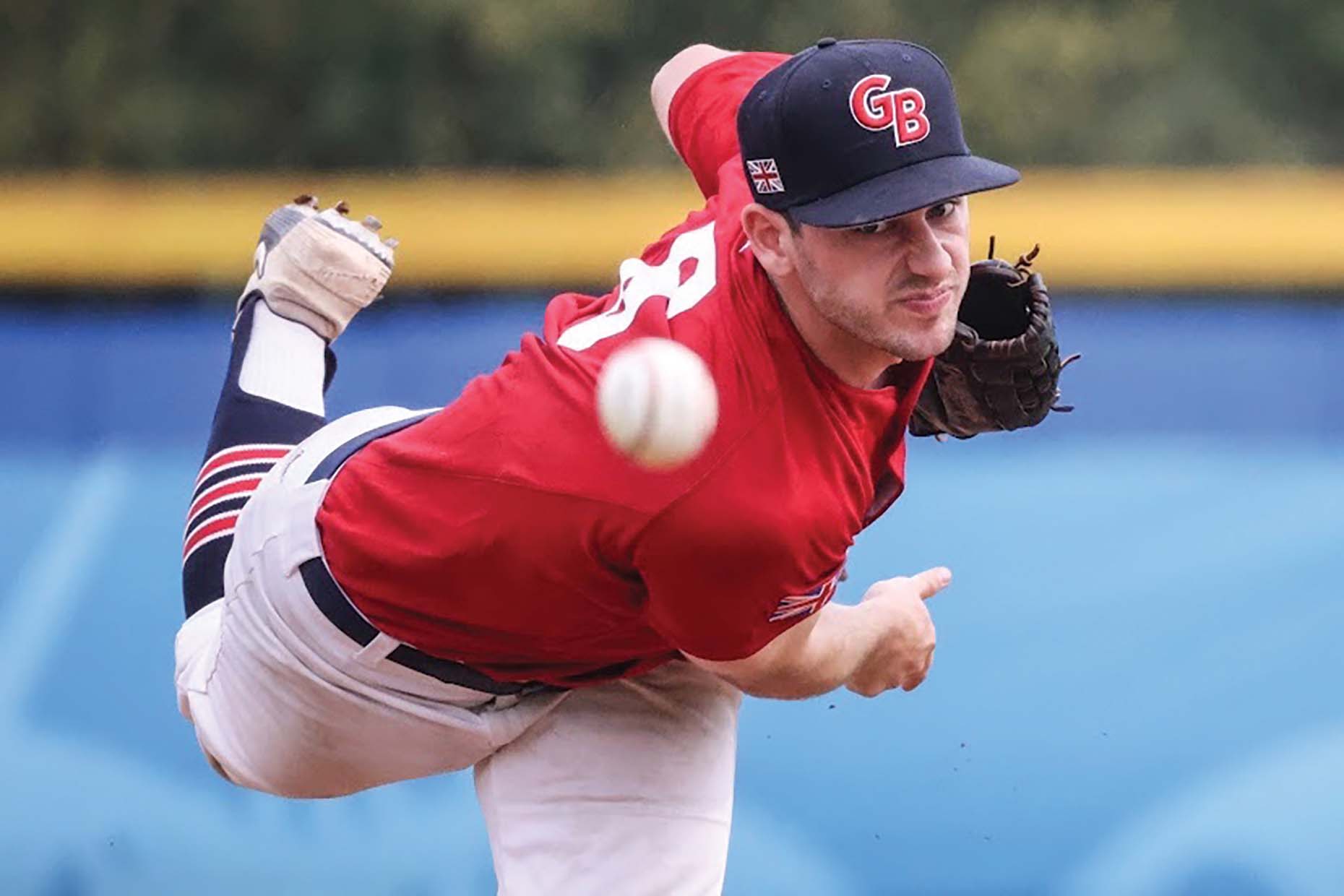 PANTHER JUNIOR PITCHER Freddy Mosier, who was born in London and whose family lives there, played for the London Mets last summer as well as the British national team. Here, he delivers a pitch in Turin, Italy, in a game against Israel in the European Championship. Photo courtesy of Freddy Mosier
By Karl Lindholm 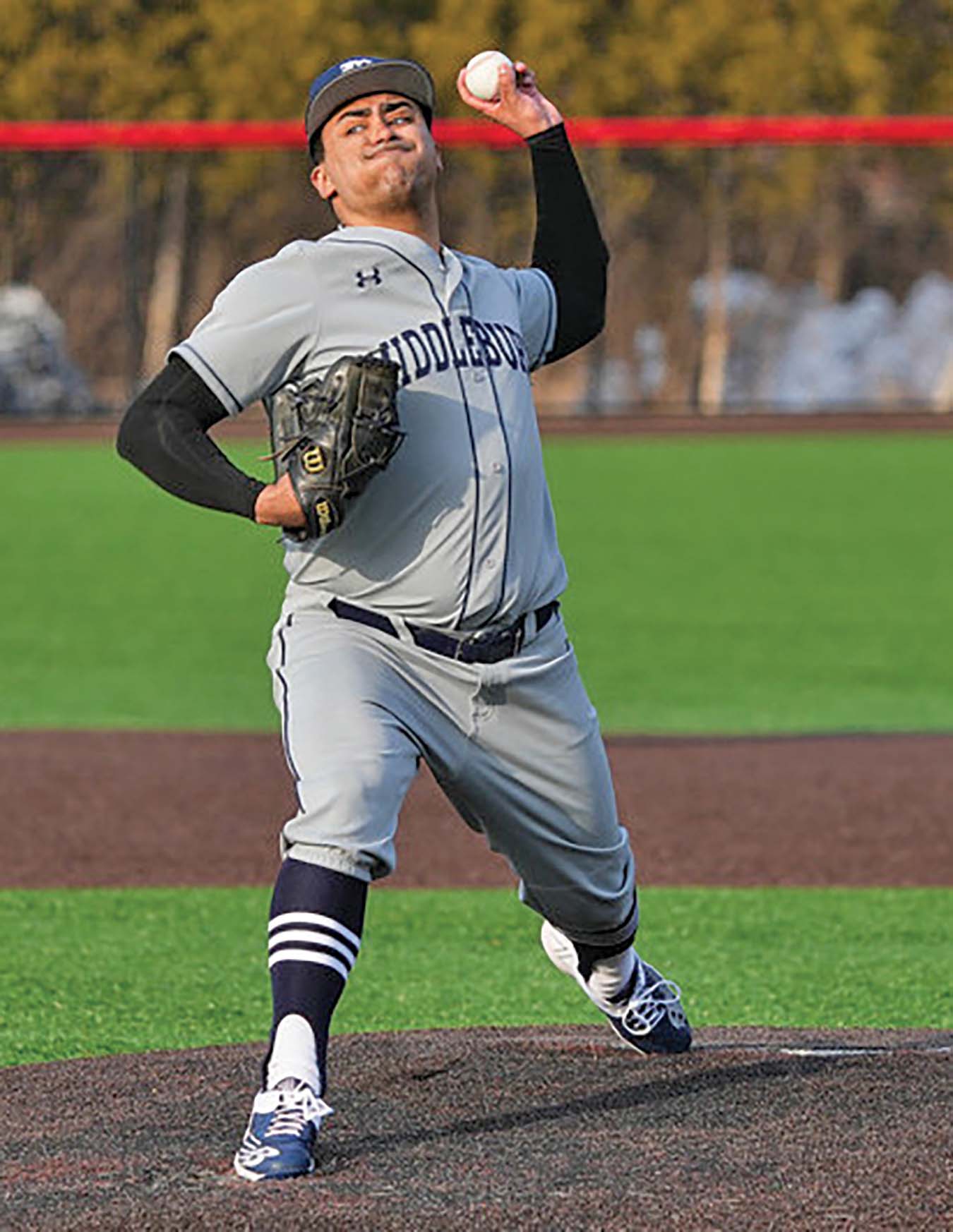 ALEX ROSARIO FIRES a pitch in Middlebury’s 11-0 shutout of RPI last Friday. The junior pitched five innings and gave up only one hit, getting the win.
Photo courtesy of David Goldstein

Understand there was always going to be baseball, even if the Big Boys had not ended their acrimonious standoff.

If I didn’t have the Red Sox game to fall asleep to summer nights this year, I still would have attended dozens of baseball games (and I might have even read a book or two!).

I would have gone to Lake Monsters games at Centennial Field, and I would certainly have made trips to Worcester and Portland to watch minor league games.

But most of all I would have attended as many Middlebury College games as I could get to, now that the college boys are playing again.

The snow may still be on the ground (as of this writing) but Middlebury is 2-1 early in this season after sweeping a double header at RPI last Friday and falling to Bard on Tuesday.

This Friday, the Middlebury baseball team heads to Orlando for their annual spring break trip south. The week includes games against NESCAC opponents Bowdoin and Trinity, along with Muhlenberg, Johns Hopkins, and St. Olaf.

In 2019, the last full season of Middlebury baseball, the Panthers had a powerhouse team, winning 26 games, losing in the NESCAC championship game to Tufts. In 2020, after playing a three-game set in Texas against Southwestern University (winning two) in early March, the entire season, all spring sports, was called off and students went home in the pandemic lockdown (you no doubt well recall that time!).

Last spring, 2021, the league, NESCAC, allowed teams to play a condensed schedule of games, with no post-season tournament. The seniors on the Middlebury team largely chose to study remotely and graduate, having lost two years of intercollegiate play.

The juniors, class of ’22, who got their feet wet in 2019, largely took the spring semester off in order to retain a year of eligibility, in the hope and expectation that the pandemic would abate, as it has. These players, still juniors, provide a veteran core on this year’s squad.

Middlebury fielded a team of inexperienced players last spring, first years and sophomores, and played just eight games, winning two. No fans not immediately associated with the college allowed. When asked if it was a “lost season,” Coach Mike Leonard said, “It was and it wasn’t.

“We had to reframe our goals to align with the circumstances. With only 15 players who were very inexperienced, winning took a backseat to long-term development and student-athlete welfare. In many ways it was a really special season. I am so proud of that group and the way they came together and grew throughout the season.”

Three members of the ill-fated but talented 2021 class have chosen to play this season as graduate students at Division I universities. Henry Strmecki, first team All-NESCAC in 2019 as a sophomore, is playing centerfield at the University of Dayton (7-5) and batting fourth in the line-up (.283 BA). Coach Leonard thinks he has a chance to be drafted and continue playing at the professional level. 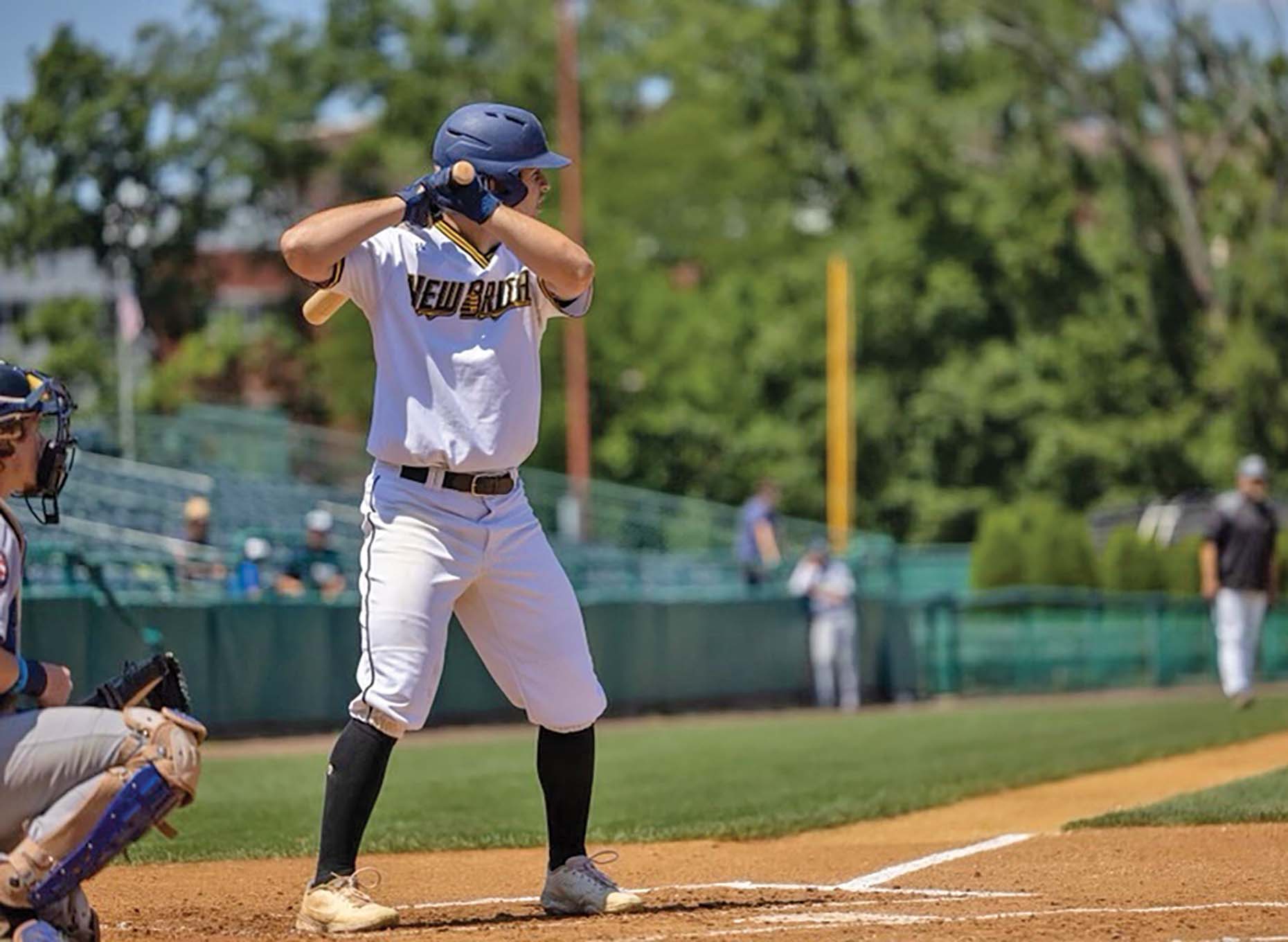 Pitcher Mike Farinelli is in the rotation at Northwestern. In his most recent start, he went six innings in a 3-2 Northwestern win, giving up only two runs. Evan Stewart is at Fairleigh-Dickinson University and has pitched in relief in four games; he has a 1.93 ERA.

It will be fun to follow former Middlebury pitcher Colby Morris ’19 as he pursues his professional career in the New York Mets organization. The NESCAC pitcher of the year in 2018, Colby pitched last summer, mostly in relief, with the High A Brooklyn Cyclones (2-1 in 27 appearances, 4.11 ERA, 1.25 WHIP). He’s at Port St Lucie, Fla., in spring training now and hopes to ascend this summer to Double A Binghamton.

A number of those members of the class of 2022, who took the semester off, found ways to improve their game in 2021 — it is the “summer game” after all. Pitcher Alex Price (Ridgefield, Conn., Economics & Environmental Studies major) played for both the New Britain (Conn.) Bees of the Futures College Baseball League and also for the Falmouth Commodores of the Cape Cod League, generally acknowledged as the best of the summer collegiate leagues, at least in the East.

“The Cape is where baseball dreams come true,” Price wrote recently in an email. “The talent and the atmosphere are truly special. My father played for Chatham back in the ’90s, so it has been my goal to get there ever since I was little.”

Outfielder Alec Ritch (Kentfield, Calif., Economics) played in 54 games last summer for the New Britain Bees, batting leadoff (.254 BA) and playing right field. His manager there was Panther football and baseball stalwart Donnie McKillop ’11. “It was the best summer of my life,” Alec said. “One of the best memories was playing in the All-Star Game hosted in New Britain. It meant a lot to me to be representing Middlebury while being surrounded by a ton of Division I talent.”

Pitcher Freddy Mosier (Economics/German) enjoyed an international baseball experience. Freddy’s family resides in London: he was born and attended high school there. Last summer he played in the Hamptons League (Long Island) first, then went home to play for the London Mets, who won the British championship. “I got to pitch the final and won the post-season MVP, which was very exciting.” At the end of the summer, Freddy played for the British national team in the European Championship against France, Belgium, Israel, and the eventual champs, the Netherlands. 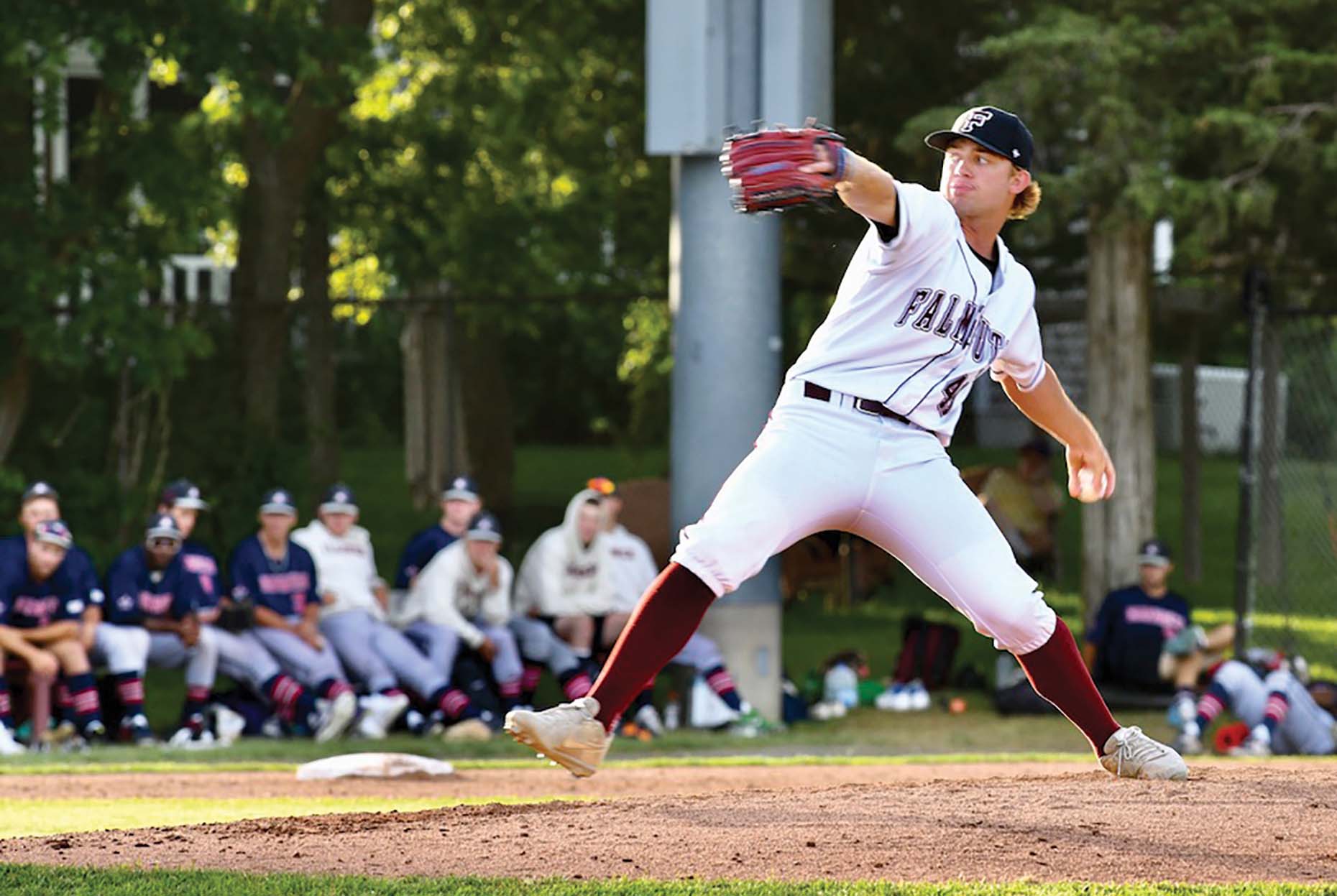 MIDDLEBURY COLLEGE JUNIOR Alex Price winds up a pitch for the Falmouth Commodores against the Harwich Mariners in a Cape Cod League game last summer. For two seasons, many of the Middlebury College baseball players were constrained by COVID restrictions from playing on the college team, but found other ways to develop their skills and express their love of the game.
Photo courtesy of Alex Price

Alex Rosario (Windsor, Conn., Math) pitched for Simsbury Sabercats in the Connecticut Baseball League in 2020 and for New Britain of the FCBL in ’21. Rosario pitched five innings of shutout, one-hit ball in the Panthers’ win against RPI last Friday.

Every preseason carries great excitement, but this spring it’s even more palpable than most. Coach Leonard had this to say about his team: “I’ve never been more confident in a team’s talent and its commitment to being great teammates. These relationships are important to our success. Every day, our players come to practice invested in ‘How do I get better?’”

Local baseball fans who have missed local baseball, put the weekends of April 16-17 and 22-23 on your calendar now for NESCAC tripleheaders against Williams and Amherst, respectively. Home games!

See you at the ballpark, at last.