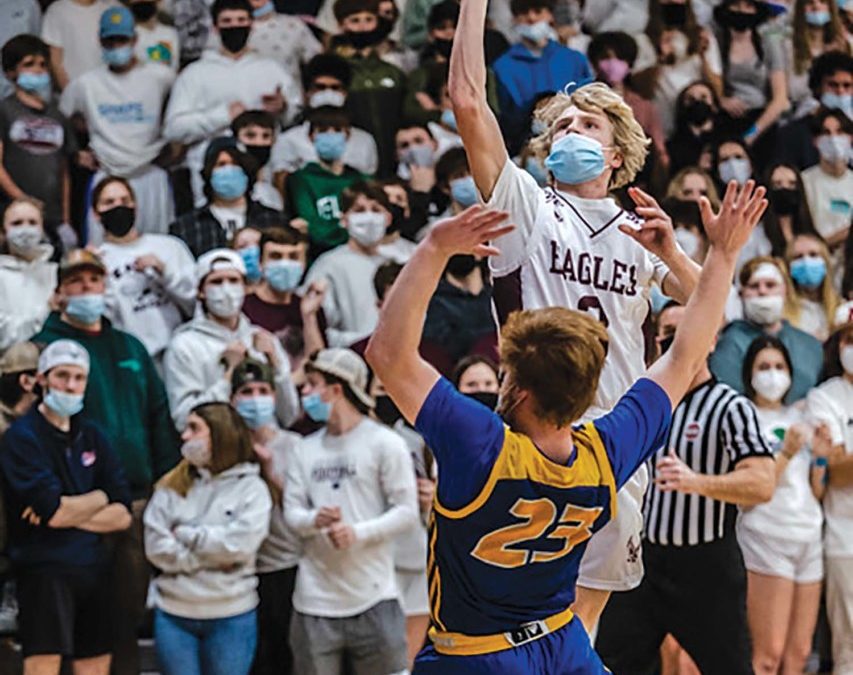 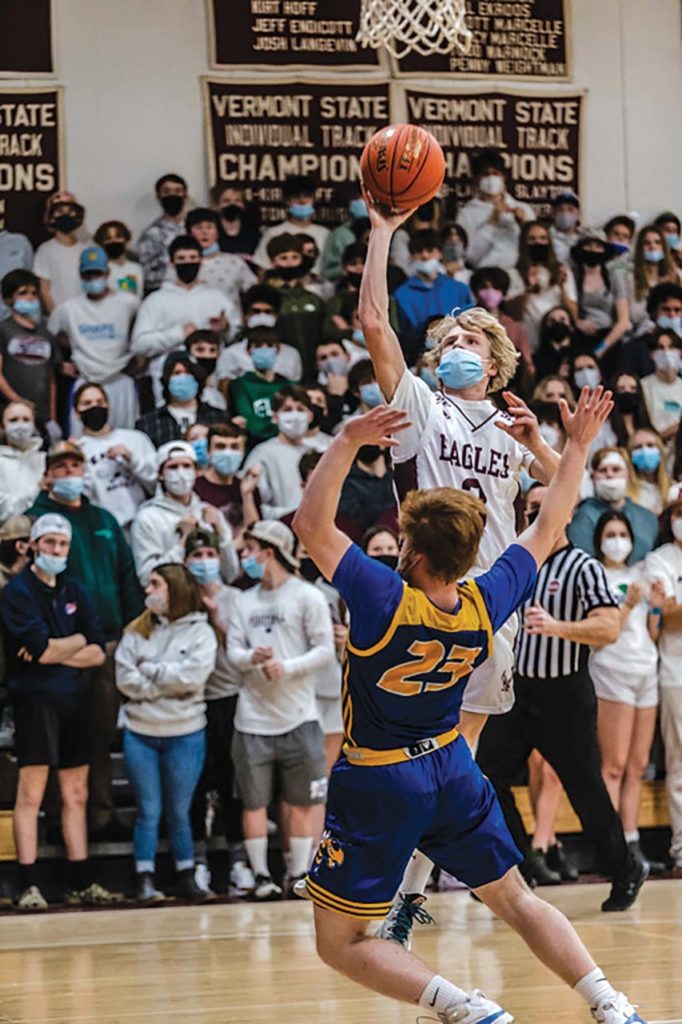 BRISTOL — It had been since 2008 that the Mount Abraham boys’ basketball program hosted a Division II playoff game, and since 2009 that an Eagle boys’ team had won in the postseason — that year the No. 12 Eagles defeated No. 5 Middlebury.

On Tuesday night the Eagles, seeded No. 7 this year, shrugged off that history — and visiting No. 10 Milton — with a 66-47 victory in front of their own fans.

The key stretch for the 16-5 Eagles began with two minutes left in the third quarter. Mount Abe got off to a strong start, but the 9-10 Yellowjackets, a team that had played well down the stretch, battled back from down as many as 13 points to make a game of it.

Six straight points in a two-minute span of the third quarter drew Milton to within 46-39 at 2:15 of the period — it was still anybody’s game.

But then the Eagles put the hammer down.

Over the next 7:17 they swatted the Yellowjackets with an 18-0 run. Five Eagles scored in the decisive surge.

Senior guard Daniel Rodriguez trigged the outburst with a putback and then a transition bucket. In the final minute of the third period senior guard Henry Cogswell scored on a pullup jumper in the lane, and senior forward’s Noah Gargano’s fast-break hoop at the horn made it 54-39.

After a Gargano free throw and another transition bucket, this one by junior guard Chance Denecker, to open the fourth period, sophomore forward Ian Funke put back in his own miss, Rodriguez stole the ball and coasted in for a layup, and Cogswell capped the 18-0 surge with a three-point play in the lane at 2:58. That made the lead a game-high 25 points, 64-39.

Despite the offensive outburst, that was not the first thing Eagle Coach Martin Clark talked about when asked about the game-breaking stretch. He pointed out Milton did not score for seven minutes.

“We clamped down defensively pretty good for a while,” Clark said.

Part of that effort was a phenomenal performance by Denecker, the shortest Eagle starter, on the defensive glass. He grabbed 11 boards to help the Eagles outrebound the Yellowjackets, 43-29, including team rebounds. Bannister was next with seven.

Clark also noted Mount Abe’s offensive balance and unselfishness on Tuesday. Five Eagles scored in the decisive stretch, and four finished in double figures: Rodriguez and Bannister had 16 points apiece; Cogswell, 14 points, plus 10 of the Eagles’ 22 assists and five rebounds; and Gargano, 11 points plus five rebounds.

“We came out early and had good offensive movement, ball movement, got some good shots and knocked them down. And then the third period we really passed the ball well, got some easy opportunities inside,” Clark said. “And that just changed the whole momentum of the game.

Clark was referring to another key Eagle run. The Yellowjackets had rallied in the second quarter, closing it with a 13-2 spurt sparked by Ben Godin and Ian Bessette to make it 34-30 at the break. 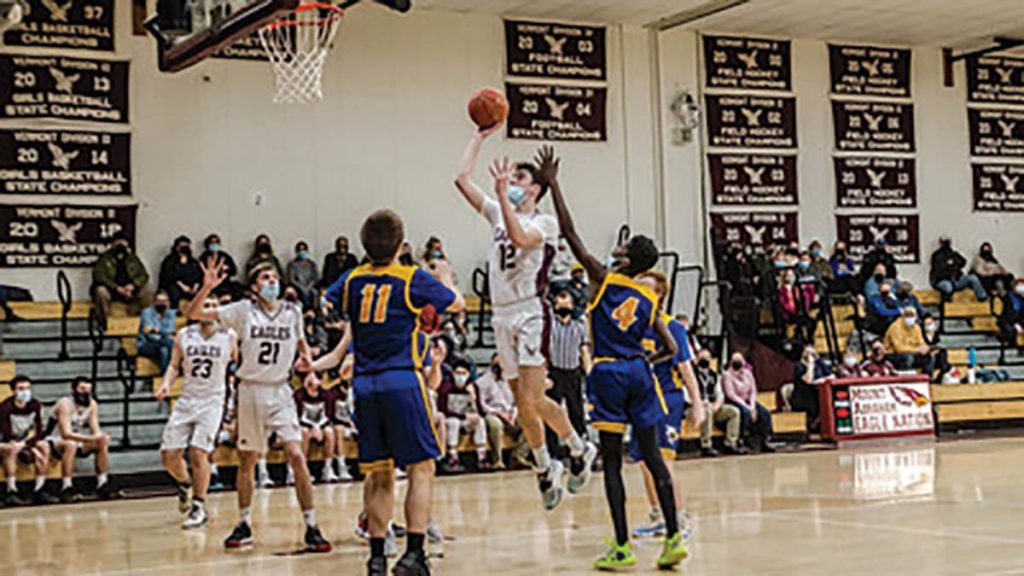 EAGLE LEADING SCORER Henry Cogswell penetrates for two of his 14 points in Tuesday’s playoff win. The senior contributed 10 assists as the Mount Abe boys won a playoff game for the first time in 12 years.
Photo courtesy of Mark Bouvier

But Mount Abe opened the second half with a 12-3 run powered by 10 points in the paint combined from Bannister, Cogswell and Gargano, including four assisted baskets. That made it 46-33.

Milton then got a three from Bessette and a three-point play inside from Godin to pull within seven, only to see the Eagles take complete charge. Godin finished with 22 points, Bessette added 11, and Donovan Dallas chipped in seven.

By then Milton, trailing, had to abandon its zone, and the Eagles soon adjusted to the Yellowjackets’ man-to-man defense and continued to get easy looks.

Clark was pleased how his team responded when Milton did make a couple of runs at them. He described the Eagles as a “level-headed” and mature group that also executes well offensively.

“We’ve done that throughout the winter. We’ve had a couple of rough patches and always come through and settled ourselves and gotten back in the game,” Clark said. “That’s just one of the good qualities of this team. They don’t get rattled.”

A challenge almost certainly awaits the Eagles in a Friday night quarterfinal. No. 2 Montpelier (19-1), the two-time defending champion, is considered the title favorite. The Solons were set to host No. 15 Missisquoi on Wednesday.

Clark said the Eagles will give it their best shot, including by trying to avoid getting into a track meet with the Solons.

“We’ll have to be on top of our game,” he said. “Hopefully we can control the pace a little bit and keep it within reach, and you never know.”