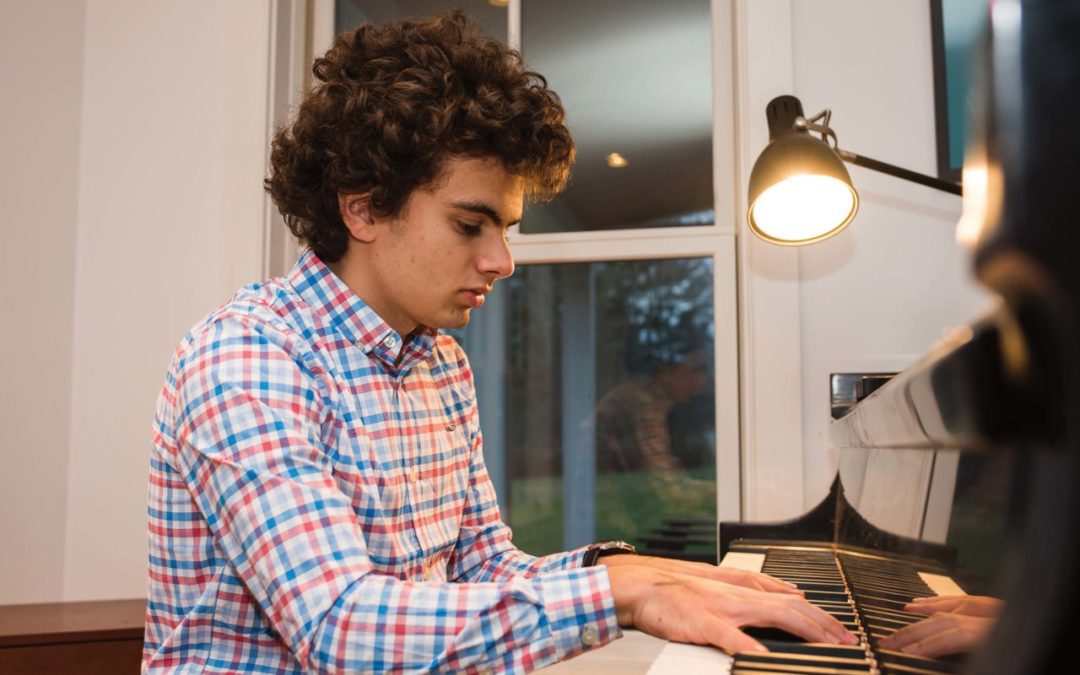 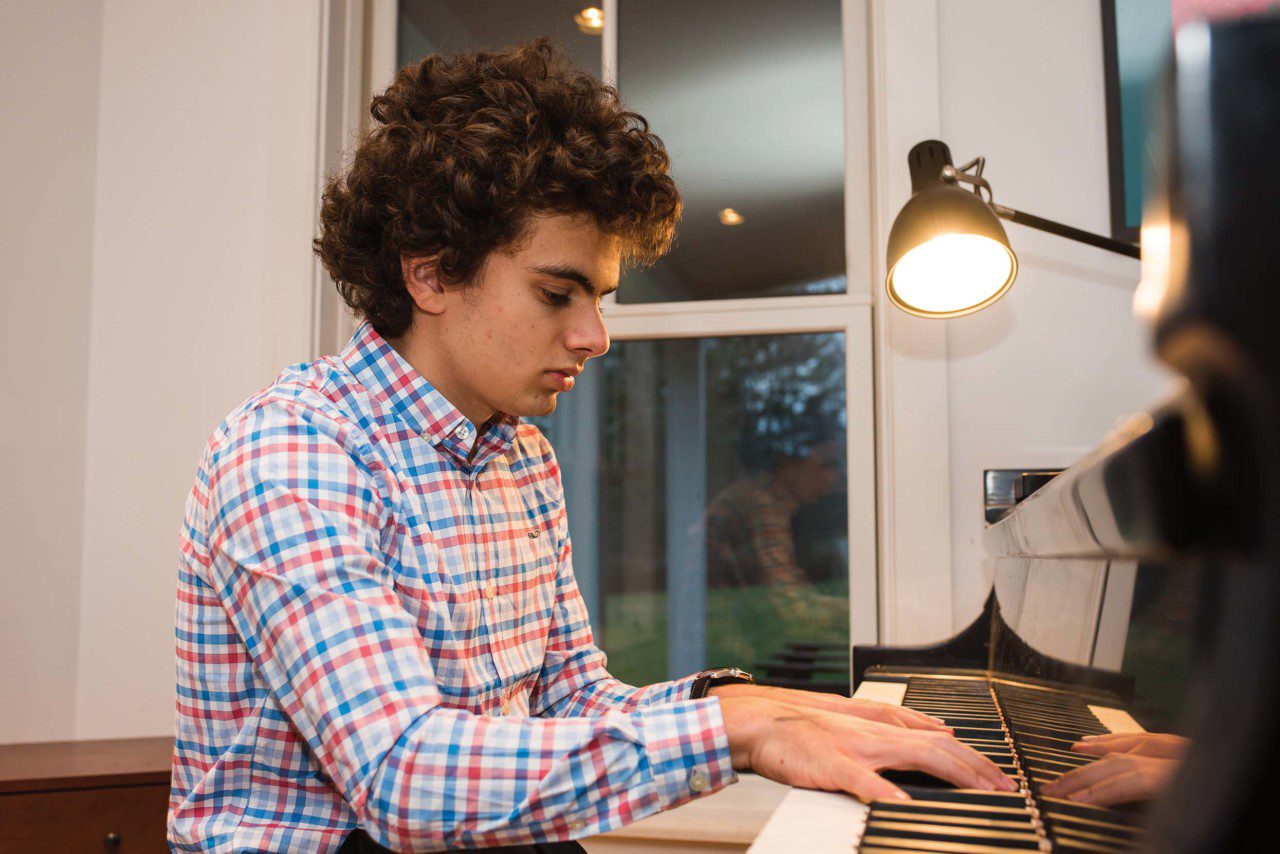 ZACHARIAH BURROWS, A Middlebury Union High School senior, is one of only four young people selected to perform solo at the upcoming New England Concert Festival to be held in Burlington, Conn. Burrows has been playing piano since he was five, and has a particular interest in jazz. Photo courtesy of the Burrows family
By John Flowers

MIDDLEBURY — The piano was more utilitarian than a source of diversion for Zachariah Burrows when he was a sprout.

His mom, Sonja, recalled how Zachariah and his two siblings used the family’s mini-upright piano as a support in their transition from crawling to walking. Each learned first to stand up while holding onto one of the piano legs, then to walk “while gingerly gripping the keys.”

With walking mastered, the Burrows children scaled new heights, literally, by climbing onto the piano stool and mashing the keys to produce a cacophony of disjointed notes that can make a parent wince and grin at the same time.

At age five, Zachariah committed to using the piano for its intended purpose, rather than as a walking aid and noisemaker.

“And so began a lifelong adventure of music making,” Sonja Burrows said.

His dedication and talent are starting to pay some big dividends.

Zachariah, now a senior at Middlebury Union High School, was recently selected to perform at the New England Concert Festival. The festival, to be held March 17-19 at Lewis S. Mills High School in Burlington, Conn., will showcase some of the best high school musicians in New England, as judged during competitions held this past December. Zachariah was one of four instrumental soloists — out of some 800 who tried out — picked to perform at the upcoming festival.

Zachariah’s selection was based on his piano performance of “Preludes for the Piano,” by George Gershwin (1898-1937), the celebrated American musician and composer.

“I was pretty surprised,” he said of being one of the chosen few. “I didn’t feel my performance was at the caliber I assumed would be required… The adjudicator had some criticisms, which I thought were very helpful. But because of (the criticisms) I was not expecting the score and the awards.”

He’ll be performing the same two Gershwin pieces that earned him a coveted spot in the festival. Zachariah will spend the coming weeks practicing, with a new degree of difficulty.

“I’m looking to memorize them, which wasn’t a requirement in the audition, but I think that’d be a good thing to do,” he said.

Will he be nervous?

“I’ve done a lot of performances and I think there’s always a bit of nervousness,” conceded Zachariah, who’s also very proficient with the piccolo. “But ultimately, it helps to realize that you’re going to go out there and play it and everyone will be impressed — it doesn’t matter how you think you did.”

Zachariah spends upwards of 10 hours a week at the piano. Some of that involves his ongoing lessons with such musician-teachers as Cynthia Huard of Middlebury College. Then there’s his participation in the MUHS band and in a couple of casual ensembles that play occasional gigs at various local venues — including the Henry Sheldon Museum of Vermont History.

While serious piano players are sometimes stereotyped as tuxedo-wearing introverts, Zachariah has fun with his musical ability. One of the groups with which he performs has a classic rock emphasis, with selections from the Beatles and King Crimson, among others. Zachariah and his crew recently performed at the MUHS talent show dressed as the Beatles, complete with mop-tops.

He does a lot of piano playing for his personal enjoyment, with the keys taking him on random trips across numerous musical genres and disciplines.

Zachariah is a versatile player, though jazz is his top choice for listening and performing. He enjoys tunes from the classical period of jazz, as well as several contemporary performers. Two of his favorite are Robert Glasper and Bill Evans. 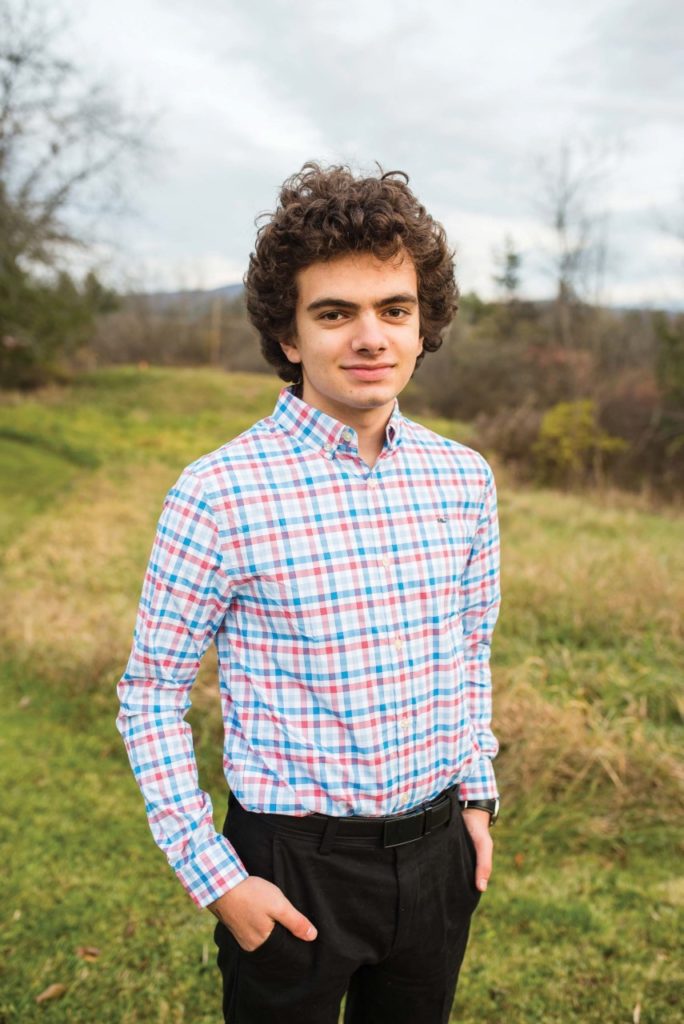 With the accolades he continues to receive, you’d think Zachariah would be aspiring to a career as a professional musician.

That’s not the case — at least for now. Engineering is his muse, and he could easily see himself seated at a computer keyboard as part of a computer science or engineering career.

“At this point, I want to focus on other things, while continuing with music as a hobby,” Zachariah said. “It’s possible I might decide otherwise, but at this point, with the colleges I’ve applied to and the programs I’ve looked at, I’ve decided to pursue other interests.”

But regardless of what he decides to do post-MUHS, the piano will remain a big part of Zachariah’s life.

“I think piano is a great opportunity for me to share things that may not be possible to convey through words or other mediums,” he said. “It’s a great way to interact with people, to show your creative side and to pursue something you can work on a little each day. And at the end, you have this wonderful, tangible product that you’re going to have the rest of your life.”

His folks are understandably proud of their son.

“As a parent, it’s been a profound experience to watch Zachariah carry this spark that is at the core of who he is,” said his dad, Peter Burrows, who happens to be superintendent of the Addison Central School District. “Music has been the catalyst for so much joy and discovery. I’m incredibly proud of him for his accomplishments, and, most importantly, for the honesty and integrity I see him bring to his music and his life.”

Sonja Burrows is impressed that her son has always been able to keep his piano playing in the proper perspective.

“Zachariah brings many gifts to the project of playing piano, but in my opinion, one of his most unusual and special talents is that for Zachariah, it has always been all about the music, and not about him,” she said. “His ego, his sense of self — those are not wrapped up in or attached to the music he makes. Although playing piano is an important part of who Zachariah is and what he does, his identity and sense of worth are suspended when he plays. When Zachariah performs, he is humble and razor-focused on the music, on sharing the best and most beautiful piano playing he can create.”