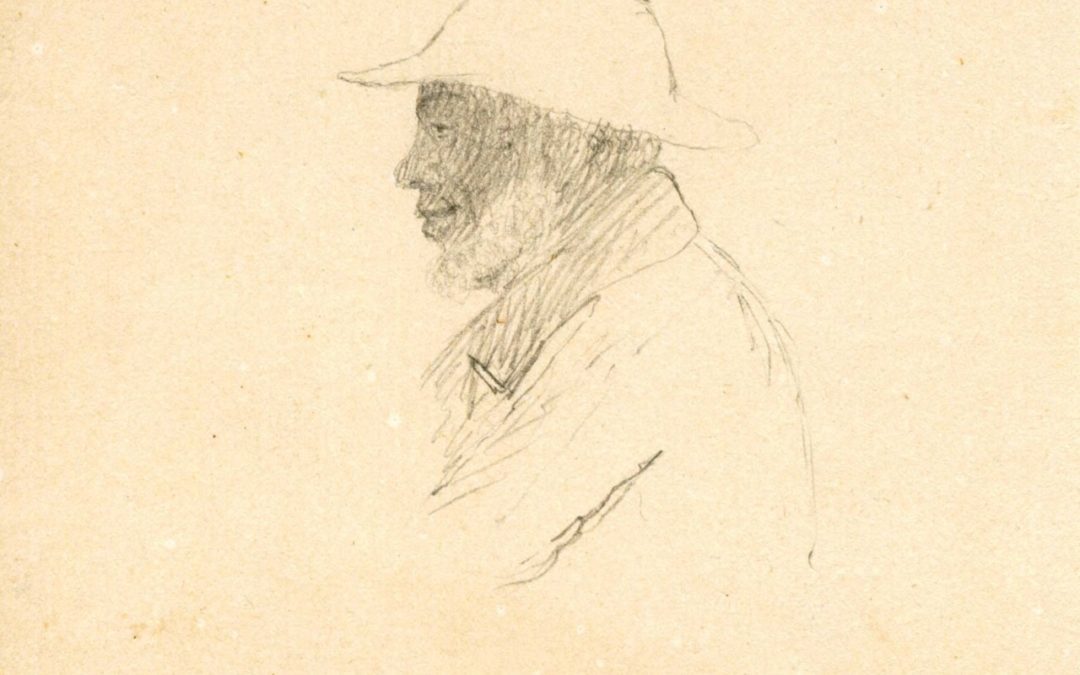 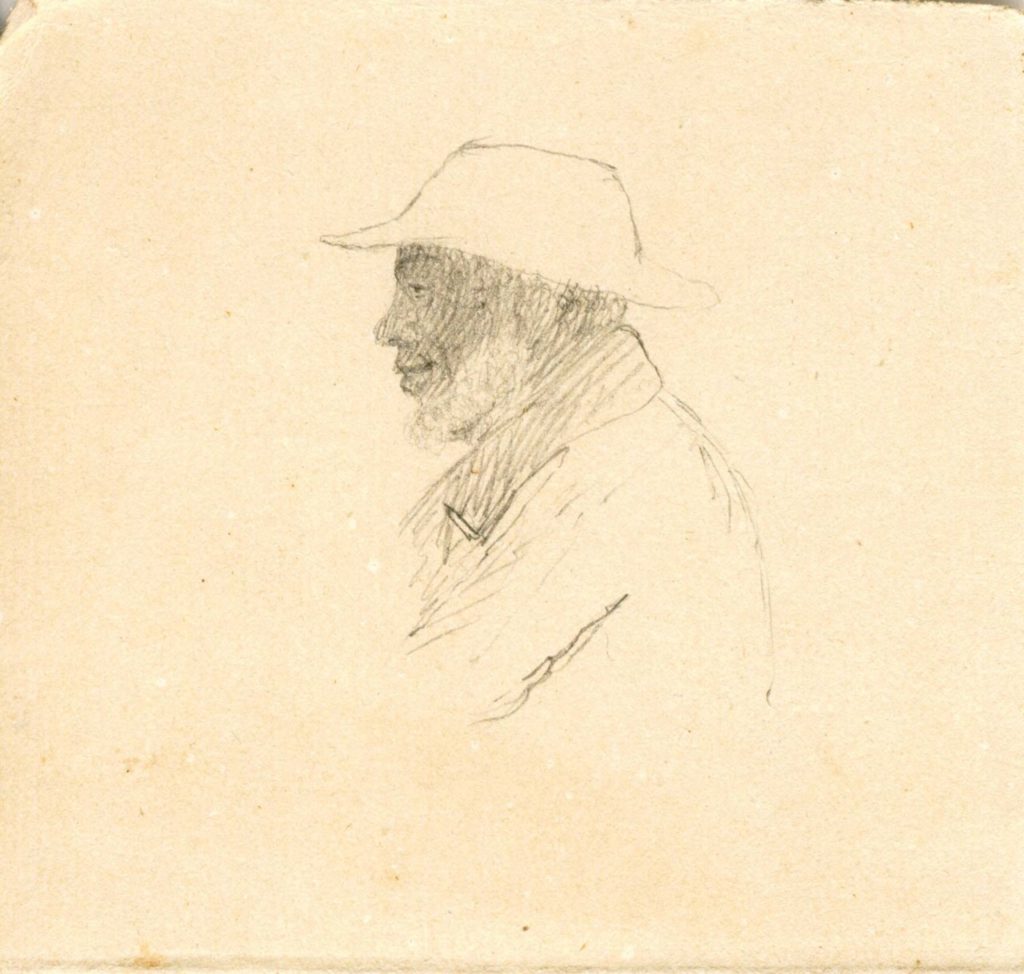 A SKETCH OF Mingo Niles by Rowland Evans Robinson

Mingo Niles was likely the longest serving employee of the Robinson family. He worked for them intermittently for about 30 years, his name appearing here and there in farm ledgers. His primary position was tending the vegetable garden, the main source of food for the Robinsons and their resident staff.

Mingo seems to have made a particularly lasting impression on the youngest of the Robinson children, Rowland Evans Robinson (RER). The only image of Mingo that remains is a hasty sketch by RER. Later in life, RER made a career from publishing collected memories of his idyllic Vermont childhood.

In one piece he highlighted the adult, Black friend of his youth in a profile titled “Mingo – A Silhouette.” It is most complete description of a Black Rokeby employee. It is also problematic. The story centers on their backwoods adventures, fishing in Little Otter Creek, heroic tales and nights around the campfire. Niles is described as particularly adept to the natural world with a “profound knowledge of medicinal and edible roots and herbs,” and a mental chart of the surrounding forests, where he trapped animals and foraged for nuts, cowslips and wild berries. RER also described Niles with demeaning, racist tropes, common to the time. He marvels at his strength while simultaneously characterizing Mingo as his naïve, downtrodden “black consort.” The piece is unfortunate. It’s also unreliable. RER, the son of radical abolitionists Rachel and Rowland Robinson, wrote fiction inspired by his unusual childhood. His stories fall on a spectrum between fact and imagination. How can reality be isolated — Who was the real Mingo?

Census and vital records leave traces of the actual man. Mingo Niles was born in Rhode Island about 1779 during the throes of the Revolutionary War. According to Robinson legend, he was brought to Vermont by Thomas Champlin around 1799, “part of the marriage portion of his young mistress.” Indeed, records reflect the Champlin family held slaves in South Kingston, R.I. and his first wife Lucy had the surname of Niles. Around the time Mingo came to Vermont he was manumitted (freed) as Vermont (and Rhode Island) held gradual emancipation laws, effectively freeing enslaved females at the age of 18 and men 21.

Mingo appears again in 1819. He was married to Betsy Jackson, a summer wedding in Shelburne. He would have been 40. It is unknown what becomes of Betsy. Soon after Mingo marries Phebe Colvin at the Middlebury Congregational Church. Phebe was one of seven African Americans who were accepted to this congregation during the first three decades of the 1800s, all female. Phebe worked as a domestic servant for the Robinsons, like Mingo, appearing in letters and account books through the years. Mingo and Phebe had one child together, Cynthia, born about 1830. Cynthia was Mingo’s only child. A free, Black Vermonter born 30 years before the Civil War.

Mingo appears as the head of household in Ferrisburgh with his family in the 1830 and 1840 census. In 1850 the family is split. Mingo appears in the Cornwall home of two white women, Maria and Elvira Float, presumably sisters, along with another white farming family, the Turners. Phebe and Cynthia (20 years old) are living in the Vergennes home of a Maryland-born Black woman, Rachael Ralestea. It’s unclear what transpired, however, this was a particularly tremulous decade in Vermont. In 1846, a lifted protective tariff on sheep plummeted the price of wool. The Robinsons took a tremendous hit, but wealthy white families were able to better weather the storm. Black Vermonters were simultaneously being elbowed out of jobs by new, white immigrant populations pouring into the state. The Niles family may have had to sell their Ferrisburgh assets and make living adjustments. Mingo likely worked for the Float sisters. Phebe and Cynthia likely worked domestically in town and rented. Mingo died eight years later in Ferrisburgh; he was 80 years old.

Mingo navigated conventional laws to secure his freedom, unlike the typical understanding of an Underground Railroad story. Once free, he sought work from his connections in Addison County. He built capital, established a family and left a lasting impression on those he knew.

Tucker Foltz is the Education Programs Manager at Rokeby Museum.

Rokeby Museum is a National Historic Landmark that connects visitors with the human experience of the Underground Railroad and with the lives of the four generations of the Robinson who lived at Rokeby in Ferrisburgh from 1793-1961. This is the fourth and final in a four-part series Rokeby Museum is contributing to honor Black History Month. For more information visit rokeby.org.