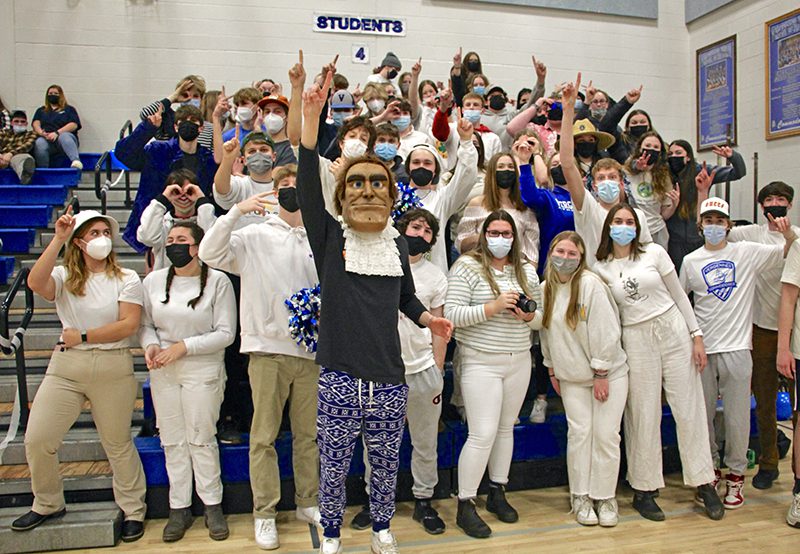 STUDENTS AT A Feb. 15 VUHS basketball game wore face masks, as they have in school for nearly two years. After Gov. Scott urged schools with high COVID-19 vaccination rates to ease up on mask wearing beginning next month, Addison County school leaders are looking to coordinate the easing of mask-wearing rules. Independent photo/Steve James
By Andy Kirkaldy

“It is important to make decisions regionally since we share students for athletics and the Tech Center. It would not make sense for everyone to be doing something different in my opinion.”
— ANWSD Superintendent Sheila Soule

ADDISON COUNTY — After Vermont schoolchildren have spent much of the last two years in face masks to guard against COVID-19, those youngsters and their adult educators may soon be showing their smiles unmasked in schools.

After Gov. Phil Scott last week recommended that Vermont schools with 80% COVID vaccination rates end masking mandates in March, leaders in the Addison Central and Mount Abraham Unified school districts sent out memos the next day saying by mid-March masks might be optional in their schools.

Addison Northwest School District Superintendent Sheila Soule responded more cautiously, saying in her district-wide memo that the team making such a decision had yet to meet. Soule also noted the Vermont Department of Health had not immediately released school-by-school vaccination data.

On Feb. 15, Scott said it was possible that the mask recommendation for all schools could be lifted due to improving COVID-19 numbers, and he noted that as of Feb. 28 states that include Massachusetts and Connecticut are dropping mask mandates.

Indeed COVID-19 cases have been inching downward. A month ago, on Jan. 21, Addison County was ending up a two-week period when it had reported 468 positive cases; but as of today the county has seen only a little over 100 cases in the past two weeks, according to the Department of Health.

Vermont Education Secretary Dan French said at the same press conference that state officials are simply making a policy recommendation, and schools can still choose to require masking regardless of their vaccination percentages.

That data appears likely to arrive during the school break between Feb. 21 and 25. According to statewide DOH data as of Feb. 15 about 77% of Vermonters between the ages of 12 and 17 have been vaccinated, as have about 50% of elementary-school age pupils.

ACSD COVID coordinator Kelly Landwehr, RN, provided data showing that five of the district’s nine schools already have exceeded the 80% vaccination mark. She reported that as of Feb. 16 the percentage vaccinated against COVD-19 by school were as follows:

Landwehr also reported that a vaccination rate of 82% at the Patricia Hannaford Career Center, which serves students from all three of the districts.

“This week or next, schools throughout Vermont will likely receive official vaccination rates from the state. Upon receipt of this data leaders in MAUSD will make a plan for when and how to move forward with expectations for masking. I anticipate being able to share our plan soon after we return from our February break. I am cautiously optimistic that making masks optional could begin by mid-March.”

“Each shift in COVID guidance requires us to pause and create a plan that considers our local landscape. If cases continue to stabilize and decline, we believe it is reasonable to plan to lift our mask mandates in mid-March for all ACSD schools. A mid-March timeline allows us time to assess any spike in cases following winter break, consult with our ACSD COVID recovery team, review forthcoming guidance from the Vermont Department of Health and other medical authorities, consult with other districts in our region, and roll out a safety plan that ensures the needs of all of our students and families are considered.”

Soule’s district-wide memo made no mention of a specific timetable:

“Once we receive the State verified immunization data and our questions are addressed regarding implementation regionally, then the ANWSD COVID team will evaluate the information and create an implementation plan for how best to move forward. In the meantime, we intend to continue with masking at all schools.”

Reen and Burrows also said masking would continue for the time being.

All three county school superintendents also suggested the districts would act in concert. They cited interscholastic sports, including in some cases teams like MUHS hockey have members from multiple districts, and the fact that all the districts send students to the Patricia Hannaford Career Center as among the reasons for having common policies.

Reen wrote, “As we have since the beginning of the pandemic, the Champlain Valley Superintendents Association is working collaboratively to think through the many factors that must be considered collectively and independently in order to operationalize this guidance in a thoughtful and sensible way.”

Soule echoed the thought in an email to the Independent: “We feel it is important to make decisions regionally, however, since we share students for athletics and the Tech Center. It would not make sense for everyone to be doing something different in my opinion.”

Reen also sounded a hopeful note, while at the same time noting MAUSD understands that moving away from mandatory masking “can be concerning for some.

“This is exciting news because it is a clear indication that the COVID-19 conditions in Vermont are improving greatly,” he wrote. “Beginning our transition away from some of our mitigation efforts, such as masking, is a step toward normalcy and learning to live with COVID-19.”