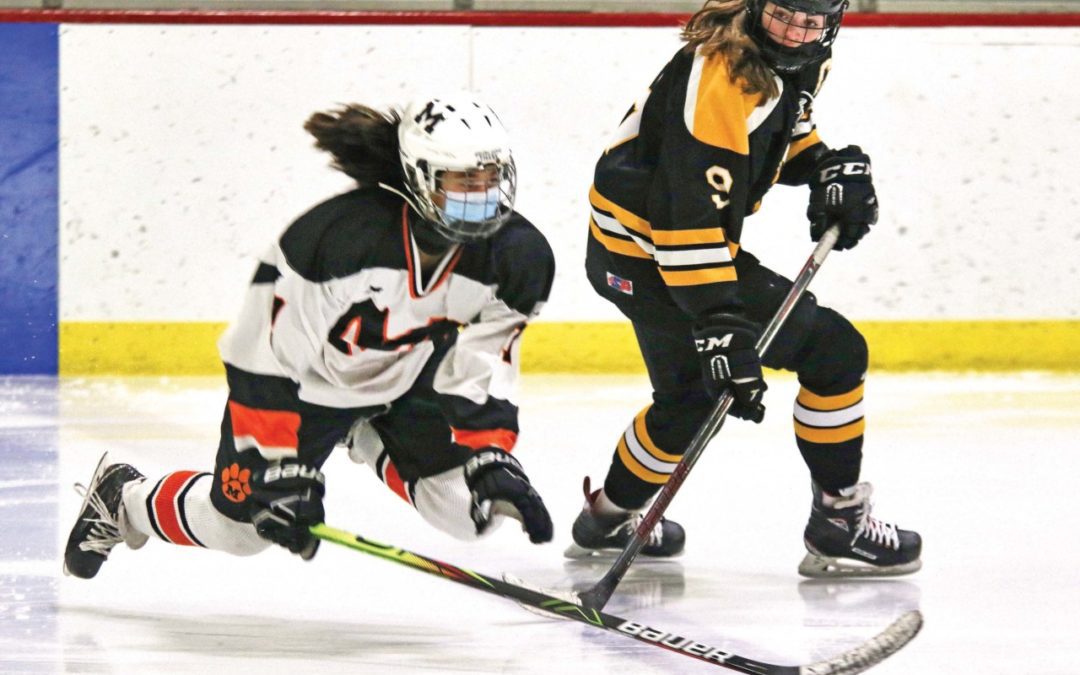 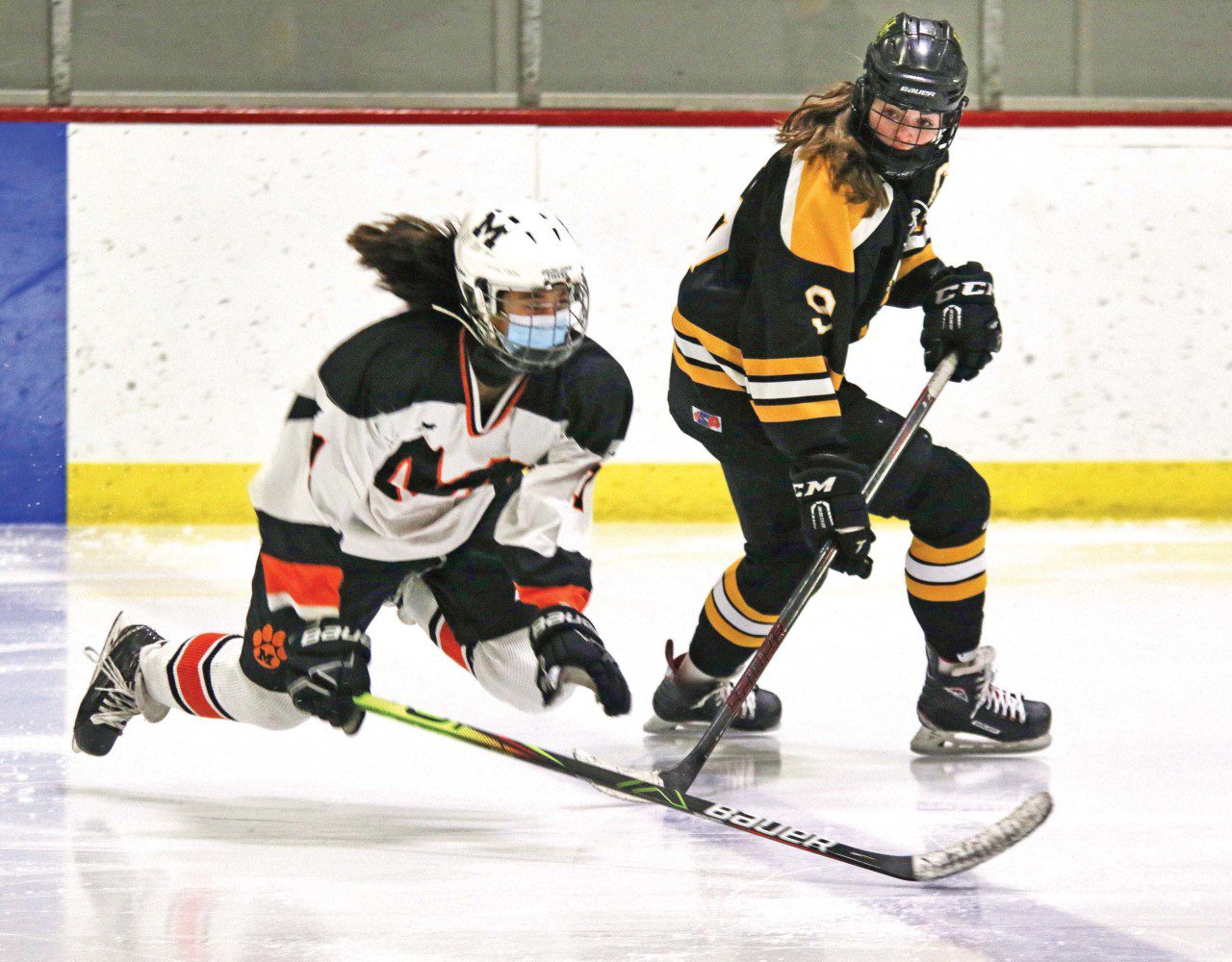 MIDDLEBURY — Monday’s Middlebury Union High School vs. Harwood girls’ hockey game got off to a promising enough start for the host, as the Tigers pressured the Highlanders early on.

Almost immediately, Harwood goalie Jordan Hunter had to stop a McKenna Raymond breakaway, and at 4:25 Erin Mulcahy made it 1-0, MUHS, by picking up a Quinn Doria shot that bounced off a Harwood defender in the slot and whipping it high into the net.

But the game began to turn late in the period when a penalty call went against the Tigers, although it looked like the players just tripped over one another.

Harwood didn’t score on the power play, during which goalie Ruby Hubbell made a couple strong saves on Highlander standout Louisa Thompson, but seemed to gain the momentum. For their part, the Tigers appeared to be out of sorts, at times frustrated, the rest of the way. 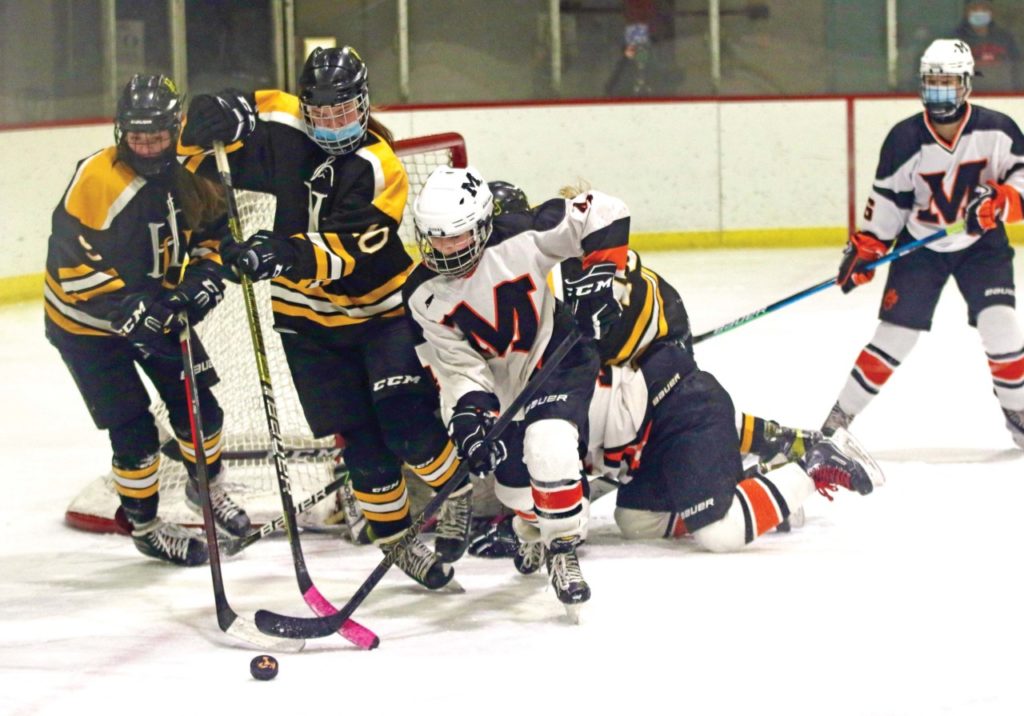 And Thompson went on to have a career night, scoring six times — four by skating in alone on Hubbell as the Tiger defense could not contain her, including twice after turnovers in the Tiger zone — as Harwood skated away with a 6-3 victory.

MUHS Co-Coach Erin Robinson, whose team dipped to 7-8 with the setback, credited Thompson.

“She’s a fantastic skater. She really owned the ice tonight,” Robinson said. “We couldn’t stop her.”

But Robinson said her skaters didn’t link up with or look for each other as well as they can, especially after Harwood began to skate better. 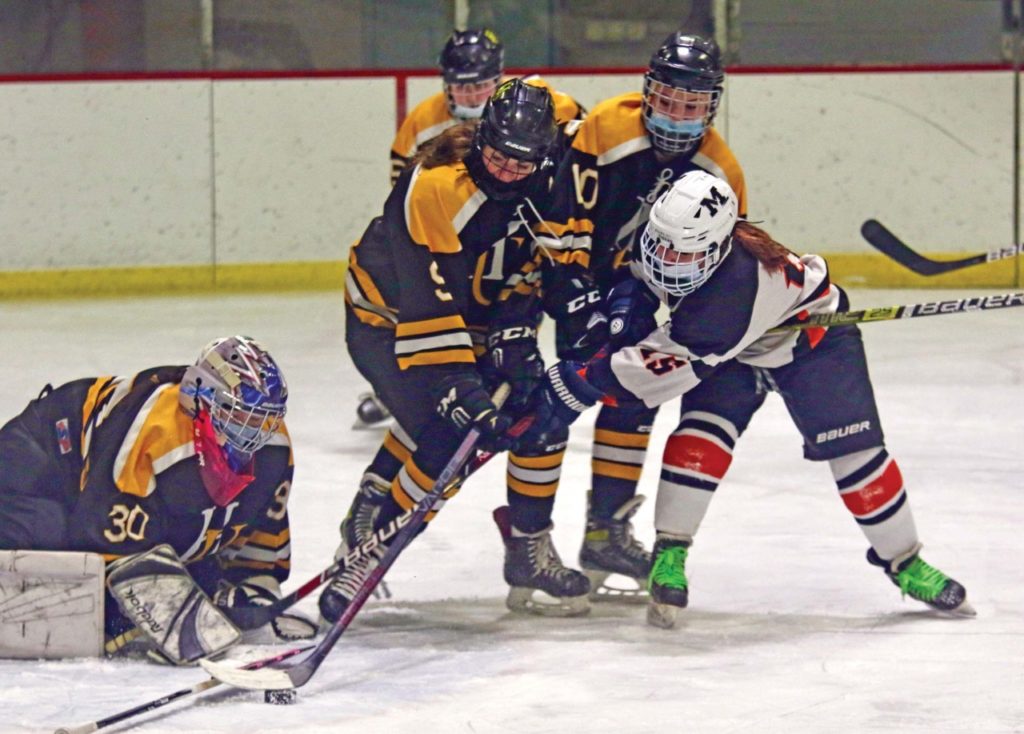 TIGER SOPHOMORE FORWARD Amelia Quesnel battles with the Harwood defense and goalie for a loose puck in the slot during Monday’s home game. Harwood pulled away late to win, 6-3. Independent photo/Steve James

“It’s knowing where we should be and where our partners are and having faith that they’re going to get there,” Robinson said. “Connecting the dots is all about team chemistry, and if it’s not there then it’s not going to translate on the ice.”

After Mulcahy gave MUHS the lead, Tigers Lily Finn and Lia Calzini buzzed the net in a scramble two minutes later, but Hunter, who made 22 saves, stood her ground. A minute after that, Hubbell made a nice blocker stop on Thompson from the edge of the right circle.

Soon afterward, both goalies came up big, Hunter on a Raymond breakaway and Hubbell from the slot on Thompson.

Robinson agreed the Highlanders switched into high gear after the call, possibly because the Tiger line rotation went out of whack. 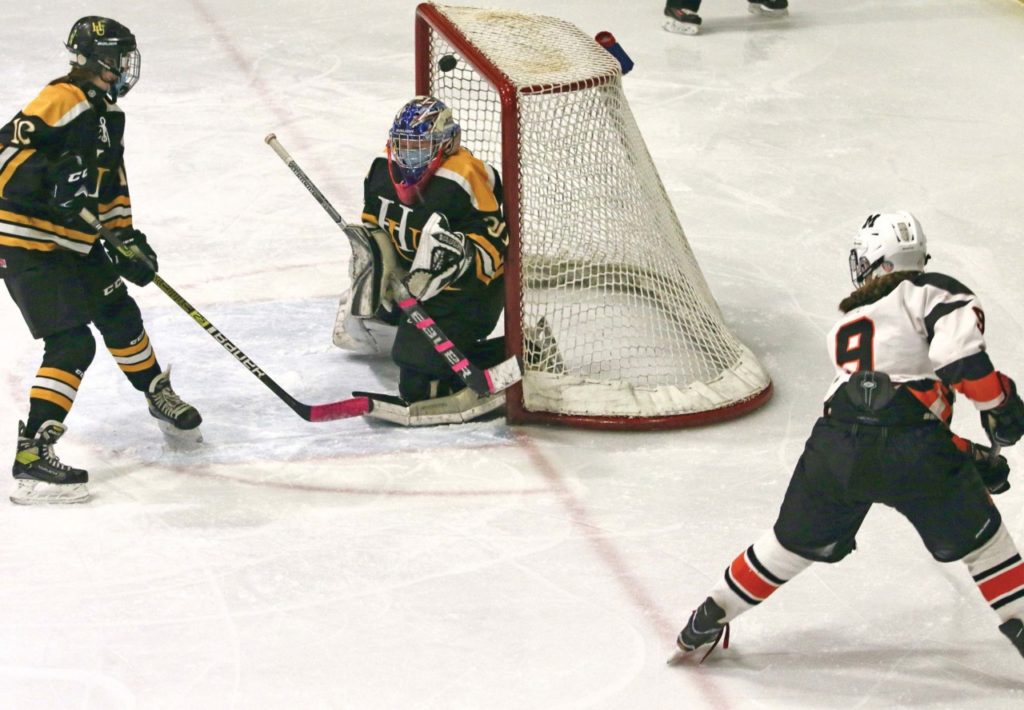 MUHS SENIOR FORWARD Avery Gale picks the upper right corner to make it 3-2 late in the second period of Monday’s game vs. visiting Harwood. The Highlanders pulled away in the third period to win.
Independent photo/Steve James

“We tried to roll different lines to stretch out their energy, and penalties definitely affect that, getting back into their rhythm,” she said.

With 2:28 left in the period, Thompson skated down the left side, and her hard shot from the bottom of the left circle trickled through and into the net.

Thompson made it 2-1 with a break-in on the Tiger goal 12 seconds into the next period. Hubbell stoned another Thompson breakaway three minutes in, but couldn’t stop the Highlander from stuffing the puck home after a giveaway in the right circle at 4:59.

The Tigers had chances throughout the period, and Avery Gale finally cashed in on a power play with 25 seconds left. She beat Hunter from the right side from a sharp angle, and it was 3-2 entering the final 15 minutes. 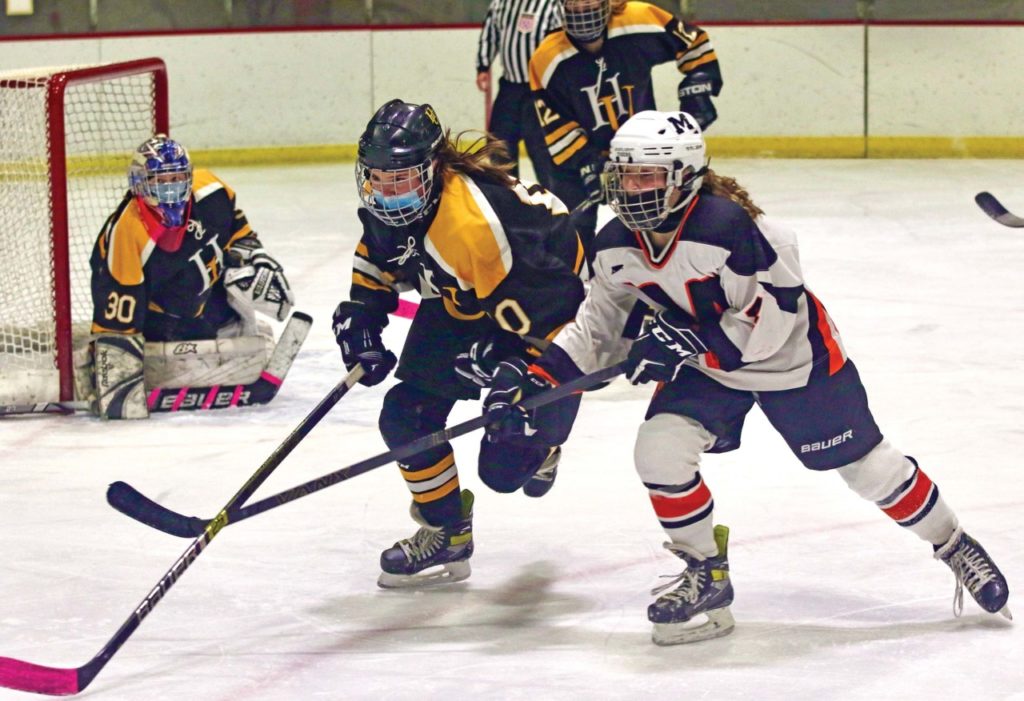 Gale had a chance to knot the score on a shorthanded breakaway early in the third, but her shot sailed high. Hunter also stopped Gale on a Tiger power play three minutes in.

Half a minute later Thompson made it 4-2 with another breakaway. Tiger Sawyer Witscher hit the post seven minutes in, before Thompson’s final two goals, one a breakaway on a power play, one a shorthanded fluke, made it 6-2. Finn’s unassisted score from the left point at 13:10 created the final score.

Before Monday, the Tigers split a pair of recent games. On Feb. 2, the Tigers rallied to win at Harwood, 3-2, as Calzini and Gale each scored in the final 3:05 of the third period to wipe out a 2-1 Highlander lead. Raymond also found the net for MUHS, and Hubbell made 16 saves

On Saturday, visiting Hartford skated away with a 4-1 victory over MUHS. Four Hurricanes scored, and goalie Sydney Stillman made 12 saves. Calzini scored for the Tigers, with an assist from Doria, and Hubbell made 19 saves.

Coach Robinson said unity would be the key if the Tigers are to see better results down the stretch.

“Until we can come together and act as a real team we’re not going to see the results that we want in our heart. It really comes down to team chemistry,” Robinson said. “If we’re not playing together we’re never going to play united and be successful.”