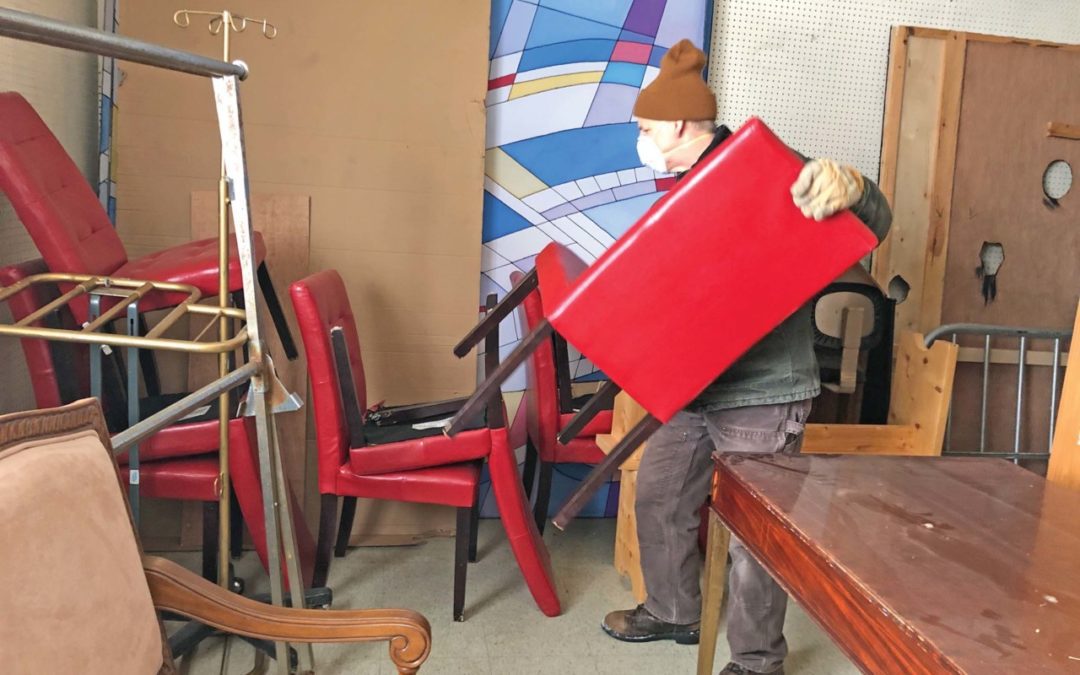 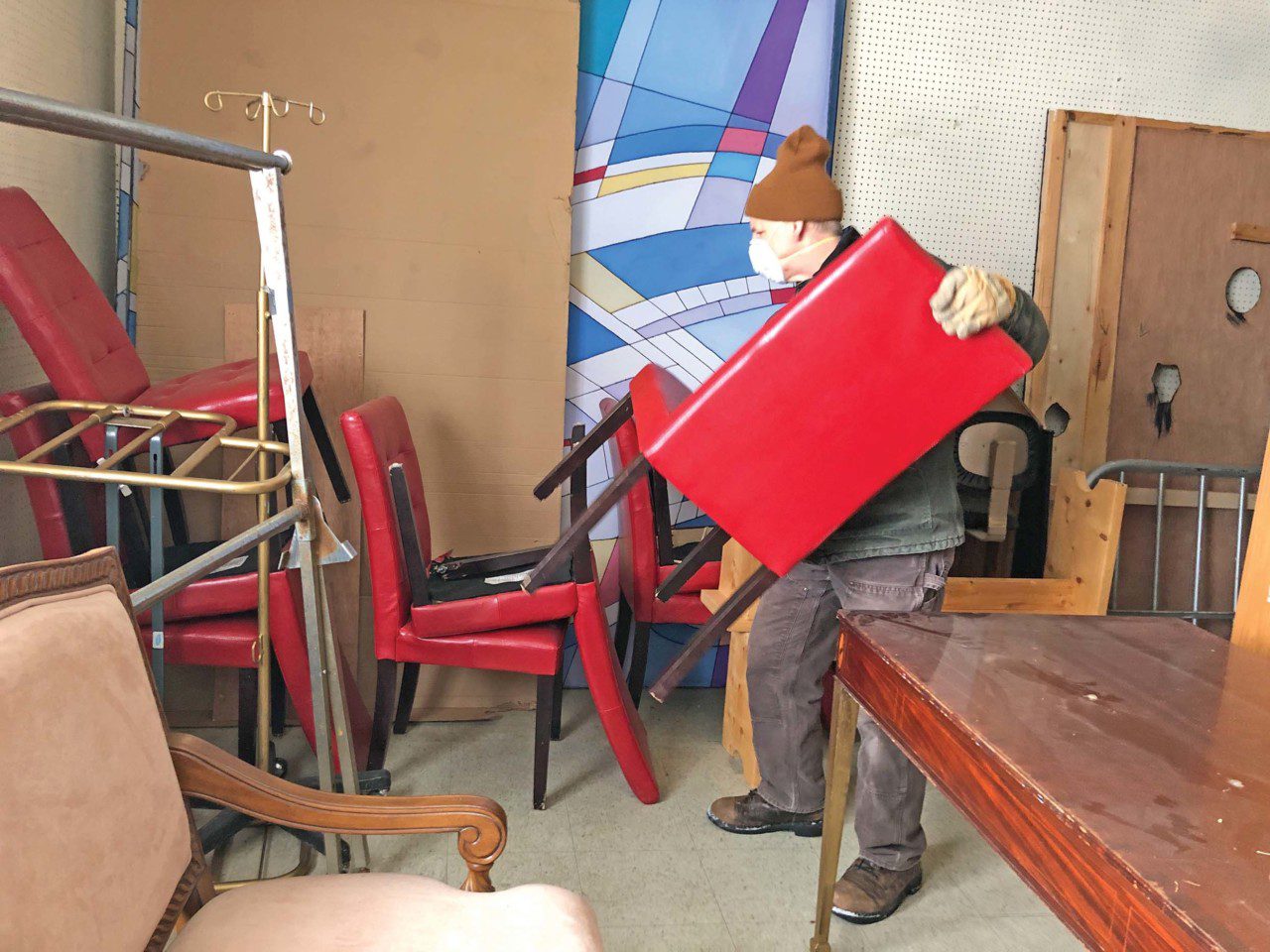 Middlebury Community Players volunteer Tom Noble moves furniture used in theater sets around the MCP storage building on Route 7 South in Middlebury. The space holds props used by the entire Addison County theater community, but the company has lost the lease and must find a new home for the stuff. Independent photo/Christopher Ross

MIDDLEBURY — Over the past 13 years — and especially during the pandemic — Tom Noble of the Middlebury Community Players (MCP) has developed an almost encyclopedic knowledge of the materials that have been used and reused in dozens and dozens of productions at Town Hall Theater and elsewhere.

During a recent visit to the company’s storage space and workshop off Route 7 South, Noble dumped a jar of screws onto a table, picked one out and held it up. Square drive, 2.5 inches, a bit of off-white paint on the head. Based on that information alone, he was able to identify the first theater set it helped build.

“That would be from ‘Music Man,’” he said, referring to a show Doug Anderson directed for MCP in 2009.

It was the same with the used lumber, sheet goods, steps, signs, doors still in their frames, arches, columns, benches, chairs, tables, shelving (and stuff made to look like shelving) he was surrounded by, with a motorized hospital bed thrown in for good measure. Items that once belonged to a grand story and sometimes had stories of their own.

This is Tom Noble’s domain. Since 2009, as an MCP volunteer, he has managed what comes in or goes out of this roughly 2,700-square-foot building, broken it down, labeled it, stored it, retrieved it upon request. MCP has stored materials in that building for 16 years in all.

And he has organized or participated in set-building projects for MCP and other local theater companies, often here onsite.

This isn’t stuff that gets romanticized in show programs or planned for when productions are being developed, but for those 16 years, 13 with Noble’s aid, it has helped keep local theater financially viable by cutting down on materials costs.

As MCP’s treasurer Noble also writes the checks that pay the rent to Addison Residential, which owns the building and has been giving MCP — and by extension Town Hall Theater and the Middlebury Acting Company, who provide MCP with small annual stipends — a generous deal.

But that’s about to come to an end. Addison Residential needs the space so it can expand its business, and it has given MCP notice that it must move out by July 1.

Since its founding in 1959, MCP has pursued a simple mission: “to further the interest of theater in Addison County.” According to a recent media release by the group, it has produced 171 shows over the past 62 years, often giving young and old alike their first opportunities to experience the magic of participating in live theater. 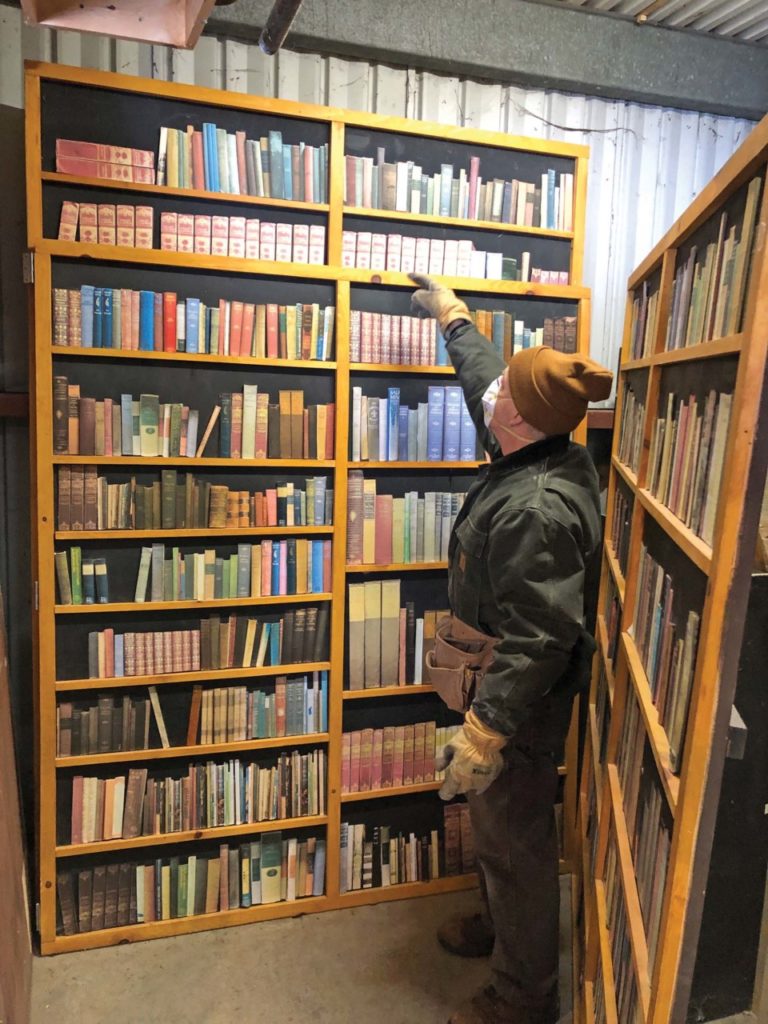 A bookcase that looks like it is full of books is a prop that has been used on sets in several Addison County theater productions. Middlebury Community Players, which houses this and many other props, must soon find a new space for its theater backdrops.
Independent photo/Christopher Ross

Some companies have also used the space for set construction.

“Thanks to the generosity of the landlords, the Middlebury Community Players could afford to maintain (the space) and give everyone free access to all they had,” the group wrote, though in recent years MCP has needed to charge small fees to help defray its operating costs.

Searching for a new home in the next couple of months has become a collaborative effort among local theater groups, Noble said. Earlier this month they met to discuss a way forward.

“The group agrees the long-term goal is to establish a permanent solution to storage and building space needs for the entire local theater endeavor, which is substantial,” wrote Middlebury artist Kate Tilton, who has worked professionally for a number of groups based at Town Hall Theater, in her notes for that meeting.

Ultimately, the organizations would like to purchase space rather than lease it, but finances, as is always the case in the theater world, are complicated.

On Monday, Noble expressed gratitude for the ongoing support of an anonymous donor who pays the rent for MCP’s costume shop, which is located in the HOPE (Helping Overcome Poverty’s Effects) complex on Boardman Street in Middlebury. Those materials, thankfully, do not need to be moved.

Regarding theater-set storage, though, Noble doubted all of the local theater companies combined could afford a commercial lease for the kind of space that’s needed.

They’ve made do in the past, however — the current space has relatively low ceilings and lacks heat and running water, which has made things challenging in the winter. They can make do again.

“If someone has a building that needs work to be usable, the Players would like to see it,” they noted in their media release. “MCP cannot afford full commercial rates, but would certainly provide other benefits and recognition to the owner.”

It’s not just for MCP, they emphasized. It’s for all local theater groups.

For more information about how to help — whether it’s an idea, a lead, material support or the name of someone who might be able to help — email Noble at tnoble@gmavt.net.

Editor’s note: Christopher Ross is a member of the Middlebury Community Players and has performed numerous times at Town Hall Theater — though not in “Music Man.”