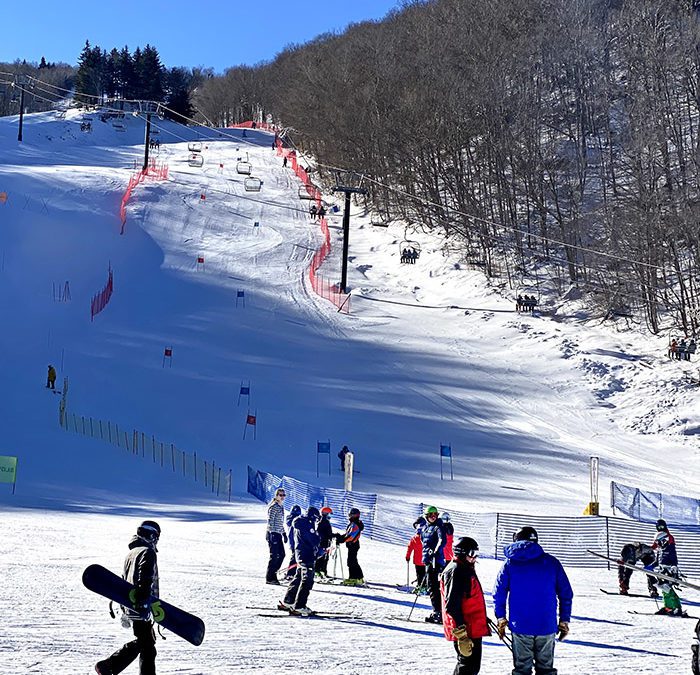 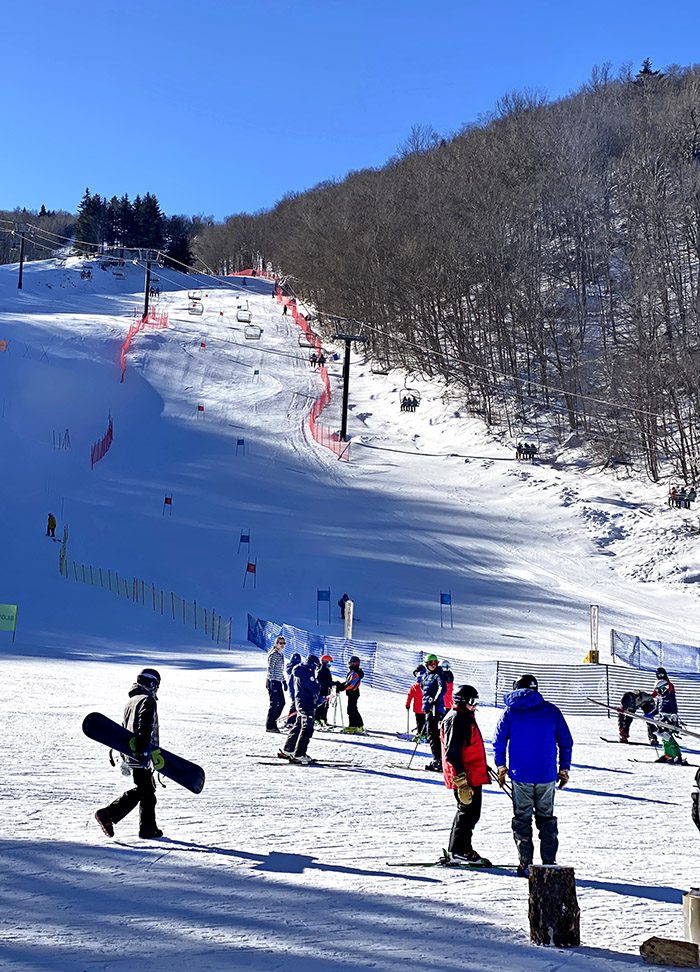 A racecourse is set up on the Snow Bowl’s Allen Trail for the McBrine race on Jan. 16, while a mix of racers and visitors in the foreground prepare to ascend on the chair lift. Independent photo/Florence Wu
By Florence Wu

HANCOCK — Contending with a warmish start to the ski season and the kind of staff shortages that many businesses are feeling nowadays, the Middlebury Snow Bowl still has seen a good early season with a jump in the number of guests. It has even managed to hire a new Snow School director.

Mike Hussey, manager at the Snow Bowl and the nearby Rikert Nordic Center, attributes at least some of the improved ticket sales to people opting for more outdoor recreation because COVID-19 is driving them away from indoor activities.

“COVID seems to have brought about an increased interest in outdoor recreational activities from which skiing and golf are benefitting,” Hussey said. “Numbers were up last year, and up again this year.”

Although we saw a higher number of warm days before the New Year, the Bowl opened on “the very reasonable” date of Dec. 1 for the Middlebury College ski team, and three days later for the public, Hussey said. It welcomed 50% more season pass holders with approximately 2,400 this season compared to 1,600 last season.

“We are also experiencing a similar percentage increase in day ticket sales through the holidays,” Hussey said. 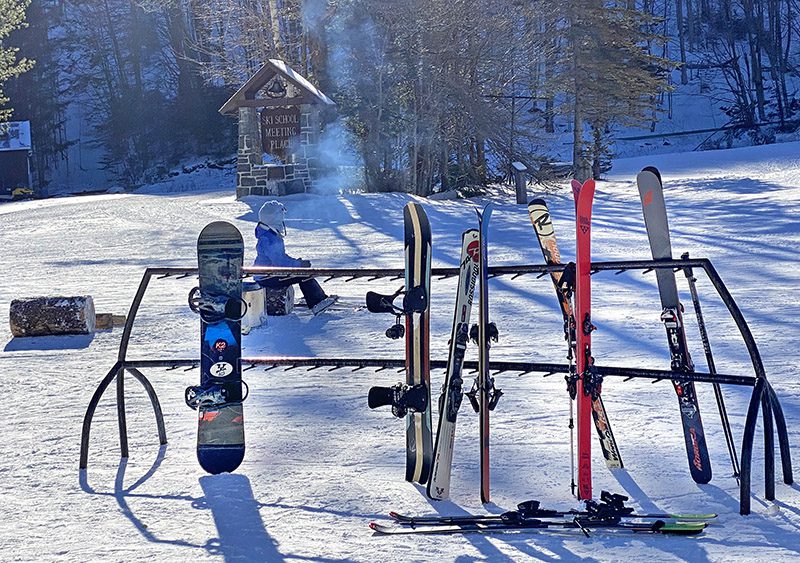 On a recent sunny day, a child enjoys one of the camp fires near a stack of skis and boards outside of the Snow Bowl lodge.
Independent photo/Florence Wu

The number of skiers at the Bowl each day fluctuates depending on weather and other factors. Last season it varied widely, from 950 to as low as 75, according to Hussey. The Bowl does not have any daily numbers tallied for this year.

The less-than-stellar ski conditions in December were no surprise. Weather forecasters had already said New England would see a warmer winter with less snowfall.

Meteorologists at the University of Winnipeg and the University of New Hampshire predict more wild swings between extremely cold days and warm winter days as a result of climate change. They described the phenomenon as “whiplash.” Data from the Hubbard Brook Research Foundation show that parts of northeastern North America have consistently seen less snowfall, warmer temperatures, and shorter winters in the past 100 years.

Burlington saw an average yearly snowfall of 63.1 inches last winter, compared to the 81.56 inches average from the past 10 years, according to the National Weather Service. While Addison County saw three heavy snowstorms in November and December, warmer days in between melted most of the snow and made maintaining snow coverage on ski trails difficult for ski areas like the Snow Bowl.

“We had a couple of 30-, 40-degree days which makes (snow making) challenging. While my goal is always to try and open in November, Dec. 4 is no later than what we’ve done normally in the past,” Hussey said.

At 11:30 a.m. this past Sunday the parking lot at the Middlebury College Snow Bowl in Hancock is packed with skier and boarders coming to watch the McBrine ski race, or to take on the slopes themselves.
Independent photo/Florence Wu

So far this season, the Bowl has made snow on 26.5 acres of its 35 acres, or 76%, of its skiable terrain. Though the possibility of installing more snow guns is discussed frequently, the college is not currently planning any expansions. According to Hussey, the bulk of their efforts is focused on increasing snowmaking efficiencies.

Even with more people on the slopes, low snow coverage and icy conditions, accident rates on the mountain have not increased, according to Ski Patrol Director Sean Grzyb. However, Grzyb emphasized, skiers and riders should “see the trail level not just as an indication of terrain difficulty, but also how you should ski through the trail,” especially when the number of trails open is limited due to low coverage.

“You should not be racing down Lang, which is a green trail, even if it is the only one open,” Grzyb said. “You also should not be going to Allen if you are a beginner or taking your kids there, because it is an advanced trail and people do go down it very fast.”

Compared to last year, the Bowl has less strict COVID-19 restrictions that allow visitors to stay indoors as long as they are masked at all times; they still must eat outside. Overall, Hussey is satisfied with visitor compliance.

“I think people understand, and they generally follow the signs,” he said.

Middlebury College senior John Vaaler, who was skiing at the Snow Bowl early this week, said he is not bothered by the dining restrictions.

“I’ve discovered the power of hand warmers (for eating outside). They keep me warm and, usually, the food stays warm too, so it doesn’t bother me too much,” Vaaler said. 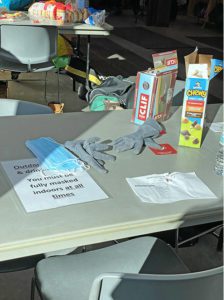 With COVID-19 restrictions in place, skiers must at the Snow Bowl must wear face masks when inside the lodge or at the cafeteria, and they must dine outside on the deck.
Independent photo/Florence Wu

Following the retirement of former Snow School Director Daphne Diego, the Snow Bowl welcomed Carrie Herzog as the new co-director, who started on Christmas week. She will be working alongside Co-director Brett Rubright.

The Snow Bowl has not been spared from the nationwide labor shortage, which Hussey describes as “challenging but not problematic.” To attract more hires the Bowl increased its minimum wage from $13.16 per hour to $15. Nevertheless, it has not been easy to fill every open job.

“I’m not gonna lie — it’s hard to find people who want to come and make snow at night,” Hussey said.

However, the Snow Bowl manager believes the staff shortage trend affects his ski area less than larger resorts with a constant flow of guests. And he expects the Snow Bowl will be able to offer a fun experience to anyone who comes to ski or ride.

“We are not exactly Vail, you know,” Hussey said. “We are a small family resort and things run at a nice and easy pace here.”

Editor’s note: When not interning at the Independent, Florence Wu is a ski and snowboard instructor at the Snow Bowl.