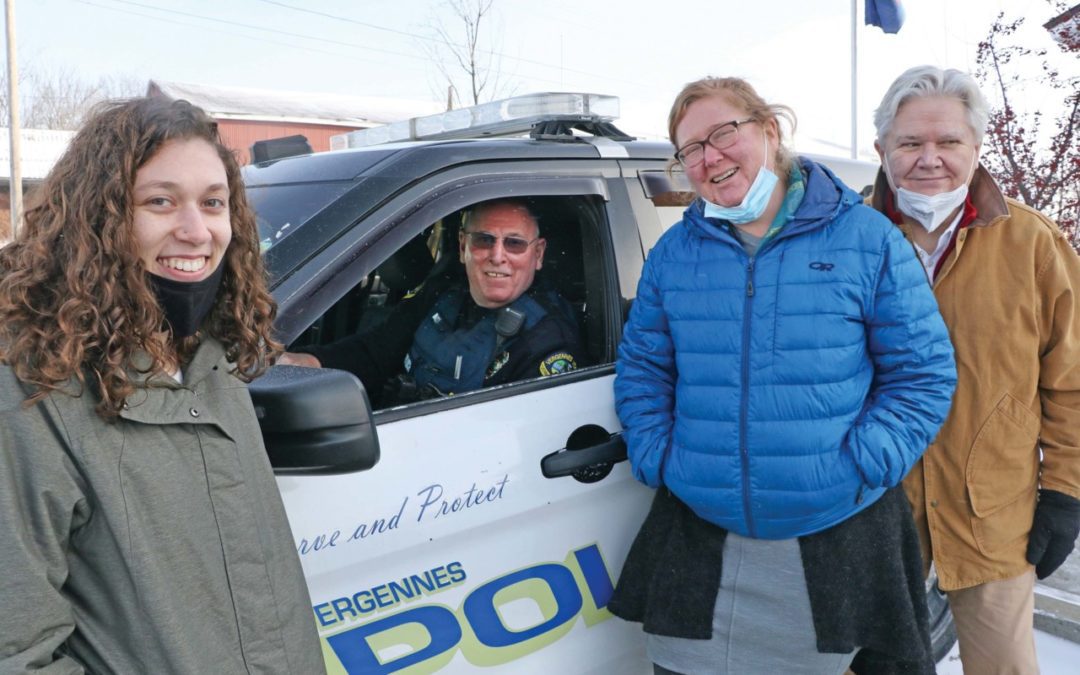 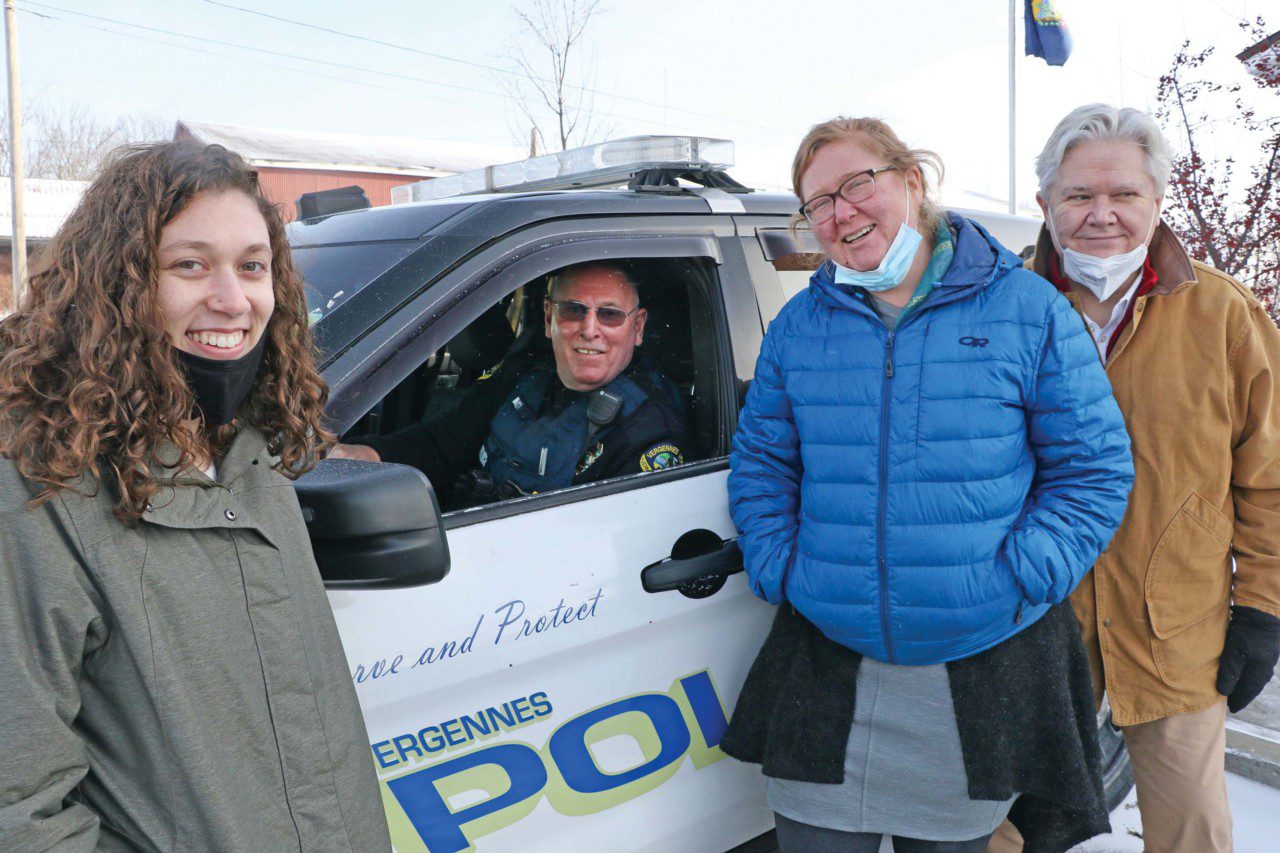 “They (officers) are out on the road, not always in the office. The iPad seemed like a creative way to have access to people immediately, really in those most vulnerable moments when people are willing to think about rehab or treatment.”
— Turning Point Executive Director Jennifer Mayhew

VERGENNES — Thanks to Turning Point Center of Addison County, Vergennes Police Department officers this week have new tools at their disposal that can help citizens in need — two iPads.

Those tablet computers will travel with city police officers in their cruisers. If the officers encounter anyone who, in their judgment, would benefit from a face-to-face talk with one of Turning Point’s 13 peer substance abuse coaches (at least one of whom is available 24/7) the officers can hand them one of the iPads.

A push of a button, and within 60 seconds a trained peer coach will appear on the screen to listen and talk to, encourage, and support the person in a substance abuse crisis, according to Vergennes Police Chief George Merkel.

“There are people we are dealing with that we can get to the coach to provide support and services (for), who need a coach … to help work through some of their issues, substance abuse or whatever else,” Merkel said

Turning Point Center Executive Director Jennifer Mayhew said her nonprofit agency, with offices on Creek Road in Middlebury, has about eight of the iPads that its peer coaches have been using since this past spring. COVID-19-related grants funded their purchase, and Turning Point hopes to buy more as funding permits.

Mayhew said many of the iPads had been deployed in motels that have hosted the homeless. But now that the state is phasing out a program to place unhoused people in hotels and motels, Turning Point has shifted the tablets to Middlebury’s Charter House and John Graham Housing & Services in Vergennes, both of which shelter the homeless, some of whom have substance abuse disorders.

Turning Point also has plans to place iPads in medical practices, and would like to expand their presence in police departments. Turning Point has already given one to Bristol Police Chief Bruce Nason, who is also receptive to the idea, but Mayhew said the device is not yet operational and awaits reprogramming.

The Vergennes department was a logical place to start, Mayhew said, because of Merkel’s commitment to the idea and because Turning Point and other social service agencies have participated in his department’s Project Vision North initiative. 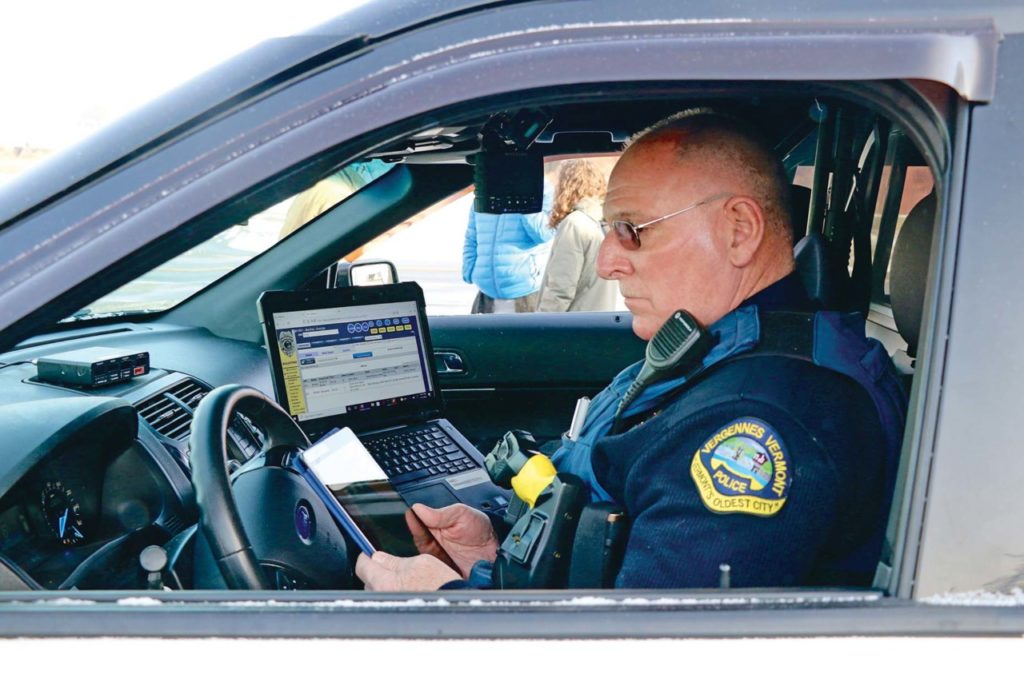 VERGENNES POLICE CHIEF George Merkel gives an iPad from the Turning Point Center a test run Tuesday. Police can give the iPad to people dealing with substance abuse issues and it will connect them
to a quick face-to-face link with a peer recovery coach.
Independent photo/Steve James

That program, modeled after the Rutland’s successful Project Vision collaborative program, regularly brings together city police and agencies such as Turning Point, AgeWell, John Graham Housing, Vermont Probation and Parole, and the Department for Children and Families to pool resources and, when privacy laws permit, information on clients.

“It’s because of George Merkel’s passion for this project, and we’re trying to model the Project Vision in Rutland,” Mayhew said. “He’s really trying to bring health and human services and law enforcement to work collaboratively, to help solve some of the problems rather than just arrest people. And I think that’s a good model to follow.”

“We are professionalizing peer support. So all our peer recovery coaches go through a certification process. They have to have over 500 hours of working in a recovery center, a certain amount of supervision. They have to have CE (continuing education) every year just like other clinicians,” Mayhew said.

She added, “We offer peer support, which is very powerful. It’s evidence-based for folks who are either struggling with substance abuse disorder, or people who are family members related to this disease.”

Statistics show that work is necessary. CDC data showed drug overdose deaths nationwide in 2020 rose by 30%, while the rate in Vermont spiked by 58%, the highest state increase in the U.S. that year.

According to Turning Point data, the center handled 9,100 sign-ins between July 2020 and June 2021 and is serving more than 50 people.

Merkel said the ability to offer support to those who need help on the spot should prove to be a critical preventative option for his officers, who often deal with people in stressful situations.

“When somebody is having one of those moments, and they’re at that point, it’s critical to get them the help they need. And this tablet is going to be a very valuable tool to have so the officer can not only keep the person safe, but also say, ‘I have access to a coach,’” Merkel said.

Mayhew talked about the benefits of immediacy and the personal connection offered by a peer coach.

“You can literally push a button and see the face of a recovery coach,” she said. “They can actually see the face of someone who has lived experience. We can not only say ‘I can help you,’ but ‘I’ve been there before.’”

And, Mayhew said, that initial call started by an officer handing over an iPad can lead to much more.

“We do the coaching piece, and we do navigation of resources. So once we establish them in our program we can help navigate them to other resources that are our community partners. They can get a full wraparound to deal with the underlying issues that might be causing that initial phone call to law enforcement,” she said.

Both Mayhew and Merkel hope the program can be expanded if funding allows, and if it works out in Vergennes.

Merkel has no worries on that count: “Rest assured it’s going to be successful in my department.”

Mayhew said peer coaches have ridden along with officers in Brattleboro, but she is not aware of the iPad approach being used elsewhere. She said expanding this method of cooperation with law enforcement agencies makes sense, given they are often the first to deal with people in substance abuse crises.

“They are out on the road, not always in the office. The iPad seemed like a creative way to have access to people immediately, really in those most vulnerable moments when people are willing to think about rehab or treatment,” she said. 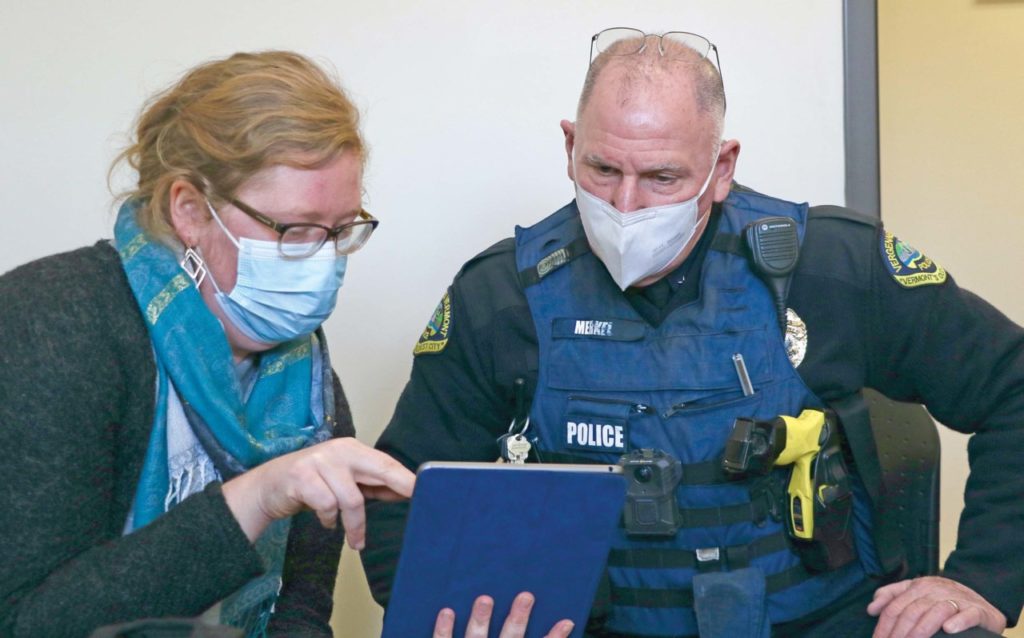 TURNING POINT CENTER Executive Director Jennifer Mayhew explains to Vergennes Police Chief George Merkel how the software works on the two iPads her nonprofit is sharing with his department. City officers can hand people they encounter who are dealing with a substance abuse crisis an iPad that can provide an immediate face-to-face link with a peer recovery coach.
Independent photo/Steve James

Both also said the city police department’s Project Vision North effort has paid dividends, and should continue to do so.

“I definitely find value in it,” Mayhew said, citing as an example one case that saw Turning Point, AgeWell and the city police work together. “We have already collaborated on a couple individuals.”

Merkel cites fewer calls to his department from certain addresses once issues were handled by other agencies after discussions at Project Vision meetings.

“Let’s say someone from Turning Point sees that we’ve dealt with somebody who’s had a drug overdose. They’re listening in, they can do that cross-reference, and they can develop a plan from there,” Merkel said. “The bottom line is we’re all working together.”

Meanwhile, the Turning Point Center is seeking American Rescue Plan Act funding from all Addison County towns for a hoped-for move into the former Shannon Street home of St. Mary’s School in Middlebury from its current headquarters.

“We could really expand our services and continue the work we’re doing,” Mayhew said. “We’ve really outgrown our current facility … The sustainability of this program is dependent on ongoing community support.”

Andy Kirkaldy is at andyk@addisonindependent.com.