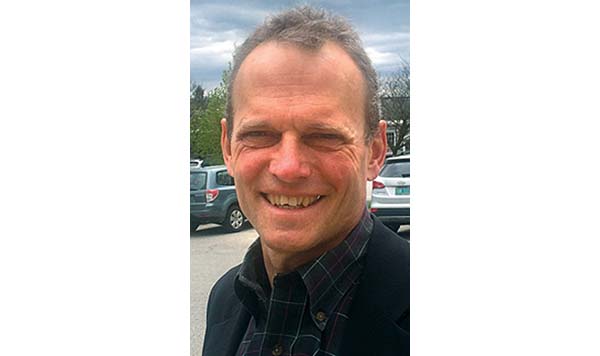 “What do people think we do when we’re sick in bed? There’s a lot of time to think and figure things like that out.”
— Willem Jewett

Willem Jewett, a Ripton resident and former majority leader of the Vermont House of Representatives, died Wednesday afternoon using a prescription obtained through Act 39, a law that allows terminally ill Vermonters to take pharmaceutical drugs to end their lives.

Before he died, VTDigger spoke with Jewett about the law he worked on while in the Legislature.

Nearly a decade ago, Willem Jewett was instrumental in passing a Vermont law enabling terminally ill patients to end their lives.

Years late he said he’s found its restrictions on patients and providers — waiting periods, multiple in-person requests — to be obstructive and “completely meaningless.”

“If anyone wants to suggest that I, or anyone else who’s gotten to this stage, hasn’t thought long and deeply about this, and if they’ve made the request, hasn’t done it with information, or at the end of the day, conviction — they’re crazy,” Jewett said. “What do people think we do when we’re sick in bed?”

“There’s a lot of time to think and figure things like that out,” he said.

To access medical aid in dying under Vermont law, a patient must have a terminal illness with a prognosis of six months or less to live. The patient must make two in-person requests — at least 15 days apart — to a prescribing physician, see another consulting physician in person and make a written request.

After all these steps have been completed, the patient must wait an additional 48 hours to obtain a prescription.

Jewett, an attorney who represented Ripton and five other Addison County towns in the House for 14 years, said his doctors warned him the process often takes much longer than two weeks. Sometimes, it takes closer to two to three months. Jewett was diagnosed with mucosal melanoma, a cancer of the mucosal membrane, in summer 2020. He began the medical-aid-in-dying request process last month.

At the same time, Jewett’s former colleagues are now considering amending the law, known as Act 39, to make it easier to use.

The Senate Committee on Health and Welfare heard testimony Wednesday morning on S.74, which would make three key changes to the law. It would allow patients to request a prescription using telemedicine, rather than in-person visits. It would remove the 48-hour waiting period. And it would expand explicit legal protections beyond physicians to other health care providers involved in the process, such as pharmacists.

Data collected by the Vermont Department of Health shows that 116 people have used Act 39 to end their lives since the law took effect in 2013. Since 2019, 29 people have filed the requisite paperwork to use Act 39, though only 17 used the prescription.

Fewer patients advance through each stage in the process, according to Betsy Walkerman, president of Patient Choices Vermont, the advocacy organization that won passage of Act 39. Sometimes that’s the patient’s choice, but in other cases, a person’s health declines rapidly, and they die before completing the process.

The timeline can be especially burdensome for people with neurological conditions, particularly Lou Gehrig’s disease (amyotrophic lateral sclerosis), because the disease can advance rapidly, Walkerman said. A patient could wake up one morning unable to swallow.

“I think there’s sometimes this misperception that people are running out and might be interested in hastening their death early in the illness,” said Diana Barnard, lead palliative doctor at Porter Medical Center in Middlebury. “I see just the opposite. People are waiting until very, very late.”

At Wednesday’s hearing in the Senate Committee on Health and Welfare, representatives of the Department of Health, the attorney general’s office and BlueCross BlueShield of Vermont testified in favor of the proposed changes to the law. Charity Clark, chief of staff of the attorney general’s office, recommended legislators consider safeguards on the use of telemedicine.

Mary Hahn Beerworth, executive director of Vermont Right to Life, was scheduled to testify Wednesday morning but was unable to attend. In an interview with VTDigger on Tuesday, she said she opposed the bill and was particularly concerned that using telemedicine for these appointments would make it easier for people to abuse the law or coerce a family member into hastening their death.

Testifying before the committee, Barnard said there is no evidence that the law has been abused.

The bulk of Barnard’s palliative care work can be done through conversation and observation, she said. The pandemic also has normalized telemedicine for patients and providers. If Barnard felt she needed to conduct a physical exam or meet with someone in person, she said, she would ask them to come into the office.

Barnard does not expect S.74 to affect how many patients seek medical aid in dying, but she believes it would improve patients’ ability to complete the request process, she said.

Ten states and the District of Columbia allow medical aid in dying. (Some laws refer to the process as “death with dignity.”) Vermont is the only jurisdiction that does not allow the use of telemedicine for these appointments, Walkerman said.

Rutland Pharmacy is the only pharmacy in Vermont that fills end-of-life prescriptions. That’s partially because the five-substance blend requires a compounding pharmacy and partially because Act 39 left pharmacists with some legal uncertainty.

The law explicitly protected physicians from lawsuits related to medical aid in dying. It did not offer the same explicit immunity to anyone else involved in the process, from hospice nurses to pharmacists.

“One lawsuit could basically put us out of business,” said Steve Hochberg, the pharmacist who owns Rutland Pharmacy.

Hochberg personally drives medical-aid-in-dying prescriptions to patients. It’s not legally required, but it’s what he believes is right.

He walks the patient and their family through the process: First, there are tablets to prevent nausea or vomiting. The mixture that causes death is a combination of five substances, including morphine and valium, and the powder is mixed with a liquid, often something like apple juice. The patient generally is asleep in a few minutes and dies within the next few hours, Hochberg said.

For legal protection, Hochberg requires the prescribing physician to sign a waiver that puts them on the hook, financially, should anyone bring a lawsuit related to medical aid in dying.

He has not faced any legal problems related to Act 39. But the unusual paperwork stops some physicians from providing medical aid in dying, Barnard said, which means some patients need to drive hours to see a physician willing to prescribe.

These long car rides are a “herculean effort” for people with severe pain, Barnard said.

The state attorney general previously said a pharmacist would be protected from liability when following Act 39, even though that immunity was not explicitly codified in law.

David Englander, senior policy and legal adviser for the Department of Health, told the committee that S.74 “codifies the status quo” and “doesn’t represent a shift, legally speaking.”

The bill’s sponsor, Sen. Dick McCormack, D-Windsor, said Walkerman’s organization, Patient Choices Vermont, first approached him to suggest the changes to the law given his past support for Act 39. McCormack said he supports medical aid in dying — and these proposed revisions — for two reasons: One is compassion, he said, and the desire to support those suffering pain. The other is “a libertarian notion.”

While he supports some protections to ensure a patient is free of coercion and is in a mental state to make the request, “this is, by its nature, a private, personal decision,” McCormack said. “The state really has no business making that decision for people.”

It’s a belief shared by Jewett, both during his time in the Legislature and now.

“It’s the fundamental authority of the individual over the most fundamental decision they’ll make in their life,” Jewett said. “It becomes simple if you accept that premise.”

After Jewett received his diagnosis and his health declined, he always knew medical aid in dying was an option, he said.

He tried multiple rounds of chemotherapy, multiple immunotherapies and radiation. But the cancer kept progressing. Each treatment diminished his remaining energy, he said. This summer, he gathered his family on his porch and told them he was considering medical aid in dying.

“Knowing that this is gonna be in Willem’s hands, and he’s not going to have to linger through some kind of gruesome, awful, long process, is incredibly comforting to us,” said Ellen McKay Jewett, Willem’s wife.

Willem Jewett said nobody has opposed his choice to request medical aid in dying.

“What I told them was, whether I do it or not, that’s up to me,” he said. “But I want to have the ability to control that last decision.”