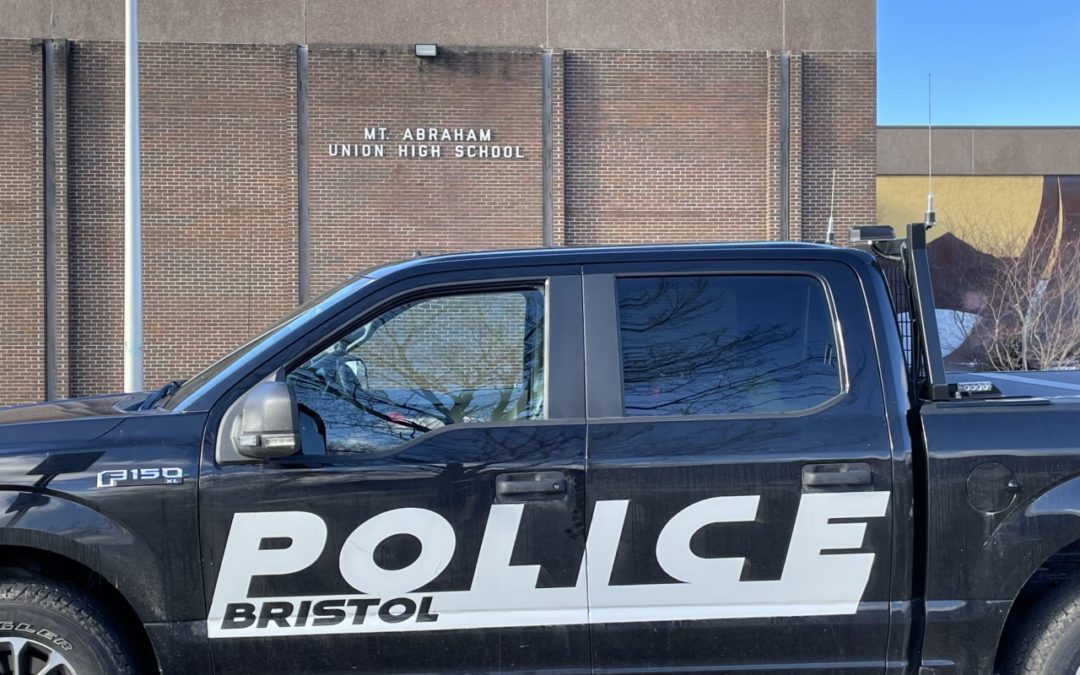 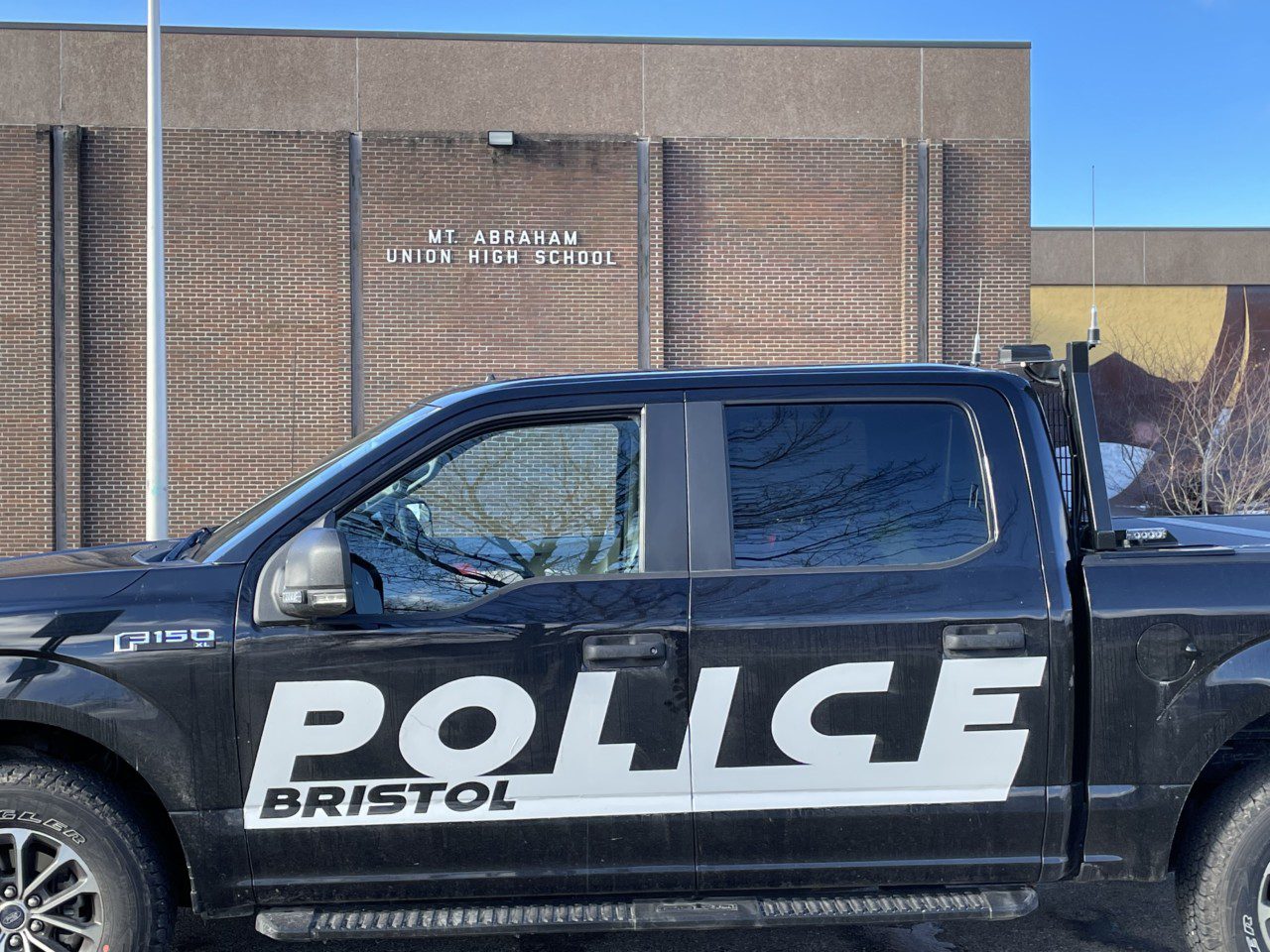 BRISTOL — At 4:45 pm. on Friday, Dec. 3, Mount Abraham Unified School District Patrick Reen read a statement to media outside the school addressing yesterday’s flag-related issues and describing how the school community will try to heal and learn from the situation.

Reen said a weapon threat issued the day before was traced to one student. Following an investigation that spanned into Thursday night, Bristol police concluded there was no was “no credible threat to the Mt. Abraham community and we were safe to hold classes on Friday,” Reen said.

Steps have been taken to address the needs of the student involved in making the threatening comment in order to help ensure they do not pose a threat in the future, Reen added.

Mount Abe will be open for classes next week, but Reen acknowledged more work needs to be done.

“While it was physically safe to bring students back into the building today and will be next week, it is clear to us that we have more work to do around the social, emotional, and mental health of our learning community,” Reen said.

With that in mind, plans are being developed to bring in additional social, emotional and mental health supports into the school, he said.

“Our equity consultants from Building Fearless Futures will also be here to provide support for our faculty and students to continue the conversations that are so essential to build trust, community, and a sense of belonging,” Reen said. To see Reen’s full statement issued late Friday afternoon, click here.

Earlier Friday morning officials from three county law enforcement agencies stood outside to ensure a smooth beginning to the academic day at Mount Abraham Union High School, which was on full alert after hearing that a student had threatened to bring weapons to school following a school ban on flag-related attire.

That ban, announced to the school community through a Dec. 2 email from Principal Shannon Warden, was in the wake of a recent trend of a few students (more than one, but how many is unclear) wearing flags as capes in support of various people, causes and/or social/political movements. Warden explained the flag capes were initially permitted as a form of self-expression, but had to be banned yesterday when it was clear the practice had “led to inappropriate, disrespectful, hurtful, hateful dialogue between students and adults.”

The hateful dialogue, according to Warden, included some students chanting “Let’s go Brandon,” which has become code on the political right for “f— Joe Biden.”

“Because the flags have created a major disruption in school, causing many students to feel unwelcome, uncomfortable, mistreated and unsafe, has forced me to make the decision to disallow the wearing of flags or banners in school,” Warden wrote in her email. “We will not tolerate students engaging in uncivil discourse, showing disrespect to their peers based on their identity or beliefs, or gathering in large groups chanting things that are intimidating to others. Consequences have been, and will continue to be, assigned to students who cannot follow our school wide expectations.”

A full copy of Warden’s email can be found here.

A Bristol parent of a Mount Abe student reached out to the Independent on Friday with her observations of the flag controversy.

She alleged a student brought a Trump flag into school on Wednesday. At some point during the day, a student is said to have stood on a cafeteria table waving the Trump flag, the parent claimed.

Then Thursday, another student brought a Pride flag into the school, she said. The parent heard from her student that there was marching and chanting by different groups through the school, with images and videos cropping up on social media. The student relayed to the parent the same report of gun threats for the next day (Friday).

The parent in question kept her child at home on Friday. She reported she couldn’t leave an absentee message at the school this morning because Mt. Abe’s voice mailbox was full.

Fueling parents’ concerns has been Tuesday’s shootings at Oxford High School in Oxford, Michigan, that left four students dead and seven others wounded. Oxford sophomore Ethan Crumbley, 15, has been charged as an adult with several counts in connection with the crime, including terrorism and murder.

Bristol police continue to investigate any and all threats, according to Chief Bruce Nason, whom the Independent interviewed outside of the school Friday morning.

Nason said the threat(s) came in via text and email. His department also received calls from community members asking if police were aware that threats had been made.

“We were notified of the concerns and we continue to look into them,” he said.

Two Bristol police officers received assistance from Vergennes police and Vermont State Police this morning to monitor students as they got off their buses and enter the Mt. Abe building.

“I can’t thank our law enforcement partners enough,” Nason said. “We’re a small agency and rely on each other.”

Nason said he believed there was no need to search through students’ bags before they walked in.

He acknowledged a diminished student body on Friday.

“We’re here often, and I can tell you by looking at the parking lot and at the number of students that got off the buses, there are less students than usual,” Nason said.

The Mt. Abe campus was tranquil during this reporter’s mid-morning visit. Two Bristol police vehicles were parked in front of the building as a brisk, chilling wind blew through an expansive parking lot harboring around half the vehicles it accommodates on a “normal” day. The powerful wind gusts roiled the U.S., Vermont and BLM banners topping the Mt. Abe flagpole.

Asked if there would be renewed police presence at the school on Monday, Nason replied, “We will be, for the near future, increasing our presence during arrival and dismissal as much as we can, more to provide a sense of security. Any threats that have been reported, or threats people think have been reported to us, we’ve looked into and there are no credible threats. But we encourage the public — if they see or hear anything that they think could be a threat — to please contact us (at 802-453-2533) and we’ll take a look at it. That’s what we’re here for.”

The school’s teachers released a statement earlier Friday afternoon supporting the administration’s handling of this latest incident, but reiterated their call for increased support staff.

“The Mount Abraham Education Association (MAEA) fully supports the principal of Mount Abraham Middle/High School, Shannon Warden, her co-administrators, and staff in their efforts to ensure a safe, secure, and productive learning environment for all of our students,” the statement said.

“The incidents this week at Mount Abraham, like the recent incidents at Bristol Elementary School (BES), however, are clear proof that our district must change, improve, and upgrade the support we provide to our neediest students. In both cases, the disruption, violence (or threats of violence) were the results of actions by a very small number of students who could not or would not regulate their behavior,” the statement continued.

“We must seriously consider establishing, or in some cases reestablishing, programs that would allow us to provide separate intensive interventions to these students until they are capable of successfully participating in the wider learning community. Not only would this better support these students, but it would help ensure that the majority of the rest of our students have access to the safe and productive learning environment to which they are entitled.”