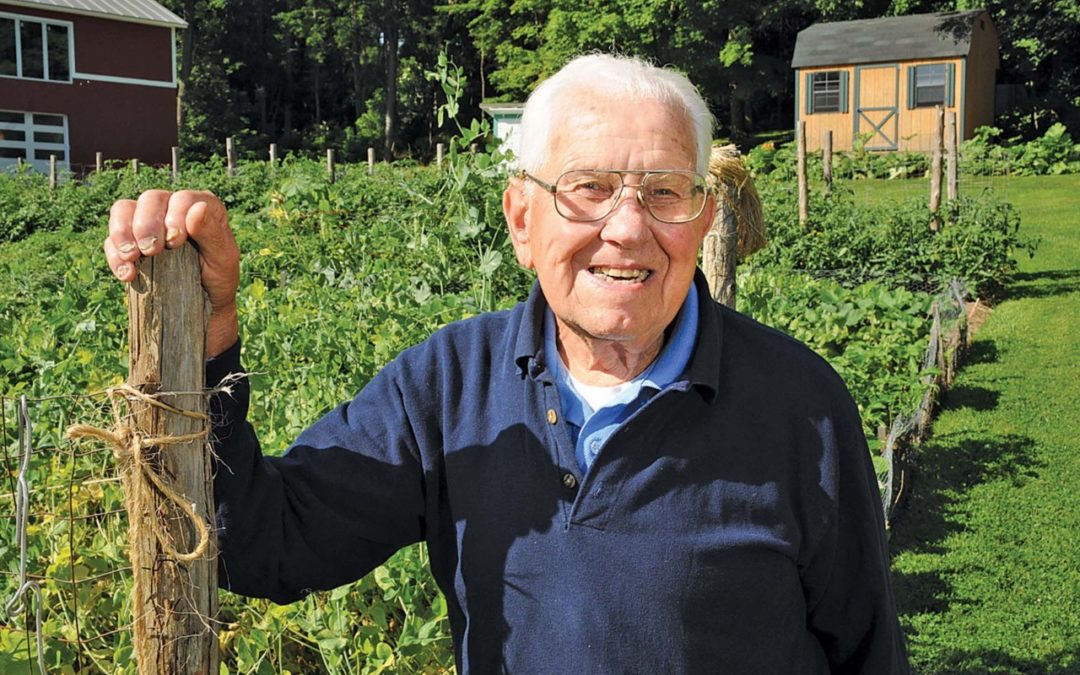 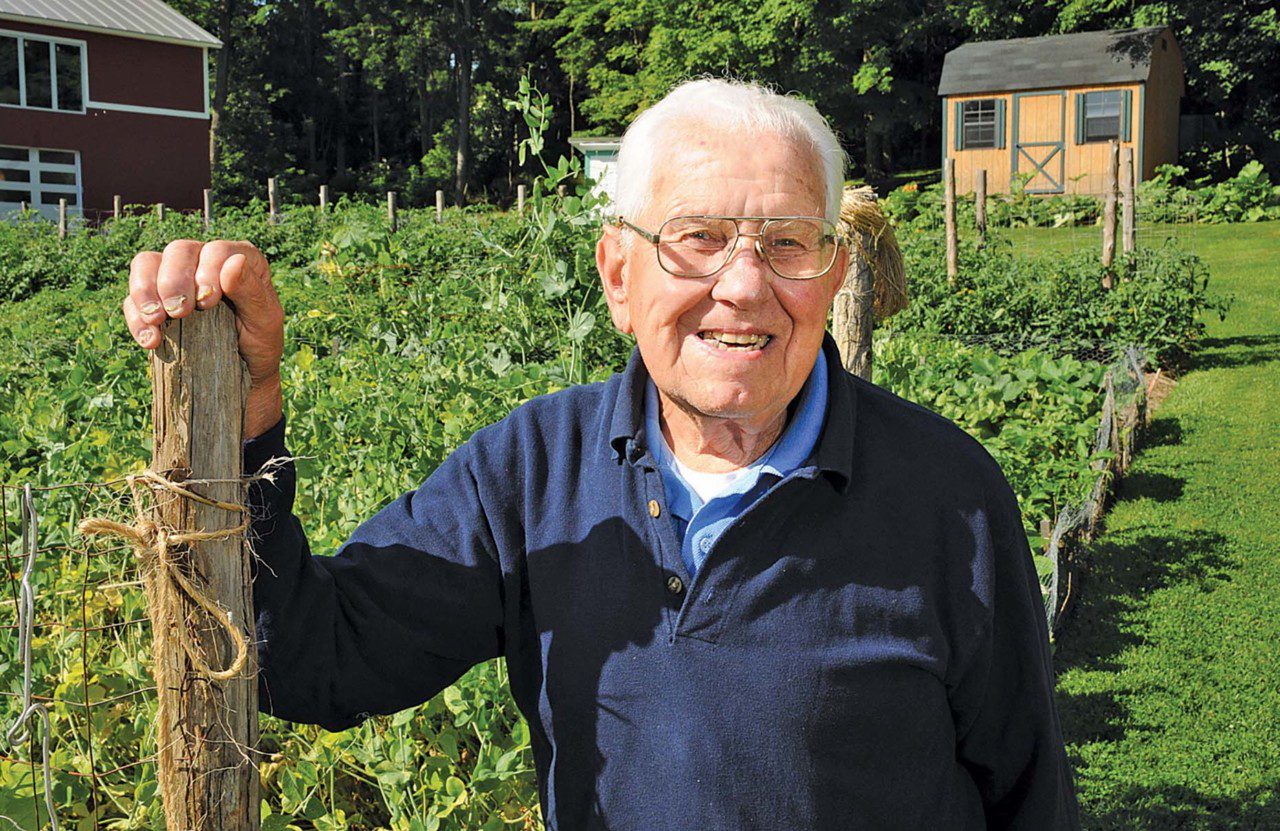 LUCIEN PAQUETTE, STILL active in his garden at age 100, was a farm educator, an icon of agriculture in Addison County and devoted to his family and faith. He always said he just loved people. He died last week. Independent file photo/Trent Campbell
By John S. McCright

ADDISON COUNTY — Lucien Paquette died last week at the age of 105. An icon of the agricultural community, he was widely known as the Father of Addison County Fair and Field Days.

But those who knew him — and it seems like most people around here did — will remember Paquette as a smart man with a calm and reassuring manner, who liked to help out because he simply loved people.

“In Addison County it’s hard to find someone who didn’t know him,” said Diane Norris, president of the Field Days board of directors and an associate of Paquette’s for many decades. “If you didn’t know him you really missed out on a lovely human being.”

During Paquette’s long life he dedicated himself to his family, his Catholic faith, and Vermont agriculture. He also cherished his French Canadian heritage.

Lucien Paquette was born in a farmhouse in Craftsbury, Vt., Aug. 14, 1916, to parents who had immigrated from Quebec. Just about everybody reading this will have no memory of the kind of world Lucien grew up in. They didn’t have electricity, they slaughtered their own animals and kept the meat cold on ice they cut from a pond each winter. They cut grass along the roadsides by hand with a scythe. Lucien walked to a one-room schoolhouse, except when he skied there on homemade skis fashioned from barrel staves. They prayed together as a family.

The Paquettes tapped maples and would carry galvanized buckets of sap to the sugarhouse on a yoke hung ’round their necks. Lucien and the other Paquette children liked to spend time with his father while he boiled the sap down to syrup and maple sugar.

“Very little white sugar purchased during that time,” Lucien recalled in an interview conducted by Jane Vincent just before his 100th birthday.

His father encouraged Lucien and his six siblings to speak French around the house. Knowing French helped Lucien when he came to work with farmers in Addison County, many of whom were immigrants from French-speaking Canada in the late 1940s. He told Vincent that he said prayers every night before bed — in French.

In 1946 he moved to Middlebury to work with the UVM Extension and the much larger number of farms in Addison County. He had found his niche at the nexus of agriculture and education.

“He was the first guy from Extension who went out to all of the farms and did hands-on education with all of the farmers,” Norris said. “Any farmer would tell you he was a great man. He had a lot of compassion and was always willing to listen and give advice, but never judging people.”

As an Extension agent, Lucien reached out to farmers in many ways. He had morning radio programs on WFAD in Middlebury and WIPS in Ticonderoga, N.Y., wrote a monthly newsletter and visited many farms in person. His son Mike remembers that his dad had a lot of night meetings. He started an income tax school to teach farmers how to keep better records of income and expenses, as well as how to do their taxes

“I would talk to people and they would say, ‘I remember doing chores in the barn and hear your dad on the radio,’” Mike Paquette said.

After UVM took over the Morgan Horse Farm in Weybridge, Lucien took over as superintendent through much of the 1950s. He said the deal was he would work 50/50 — half of his time managing the horse farm and half of it as an Extension agent. He told Vincent, “It turned out to be more like 75/75.”

He and Loretta and the kids lived at the farm during those years. Lucien acknowledged to a grandson who interviewed him years later that looking back he felt uneasy about how much of the load of parenting Loretta had to take on when he was so busy.

When Lucien was the UVM Extension agent in Grand Isle he started a kind of a field days for young people interested in farming. When he moved to Addison County and observed so many new things come onto the scene after World War II, he saw the need for a field days for all people involved in agriculture.

“I just thought this seems like kind of an ideal thing, education wise, to be able to show things to the public,” he told Jane Vincent.

So he found a farm that would host the event, set up a single tent and arranged for exhibits and demonstrations of all the innovations in farming. Over two days attendance was about 2,000. And he kept organizing these Field Days year after year, never holding them in the same place two years in a row. After two decades Field Days found a permanent home at the Addison County fairgrounds in New Haven, where it is still held today.

He served on the Field Days board into his mid-80s, and Field Days honored him by naming a building after him. Not resting on his laurels, Lucien helped get the Addison County Maple Sugar Makers Association of the ground in the early 1970s. He was inducted into the Vermont Agricultural Hall of Fame in 2014. 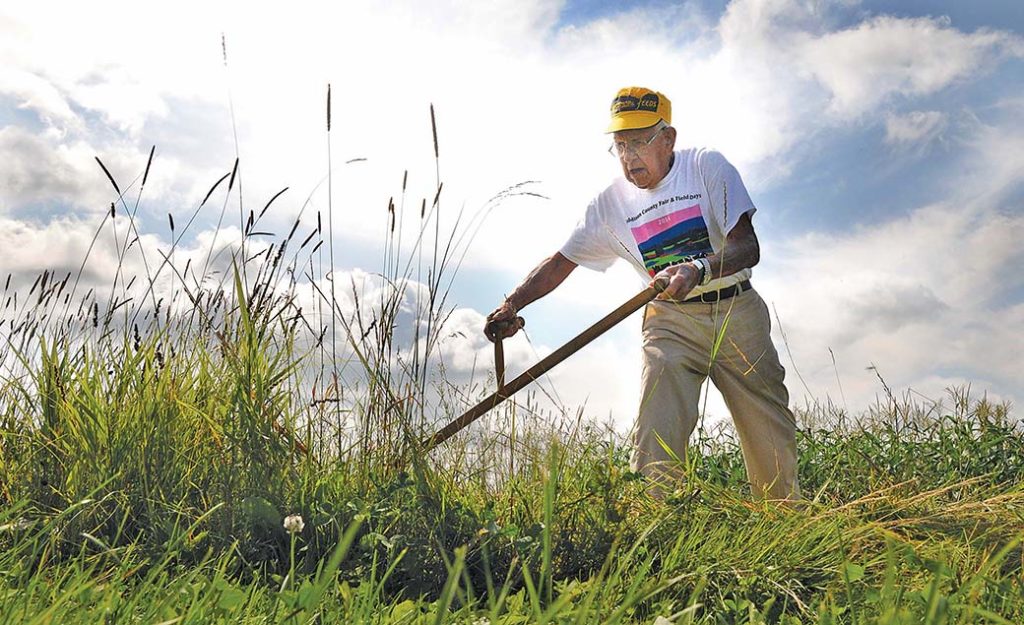 LUCIEN PAQUETTE takes a turn in the handmowing competition at Addison County Fair and Field Days in 2014, a few days before his 98th birthday. Paquette, who founded the mowing event in 1978 and the fair in 1948, died Nov. 23 at age 105.
Independent file photo/Trent Campbell

Through it all he kept himself grounded in his family, his faith and his work. And there was a lot of work, and not just with the farmers. Mike Paquette recalls his dad taking on odd jobs to earn a little extra money. Lucien worked Saturday mornings at the Beckwith and Smith car dealership on Route 7 South doing oil changes and detailing cars.

“Dad was thrifty — not cheap, thrifty,” Mike Paquette said. “He had to be with 12 children.

“His best story advising us was on wants and needs,” Mike recalled. “Do you want it or need it? If you want it you can do without. He would preach that.”

Maybe Lucien could get his message across to his children because he was a man of simple needs. Take his faith, for instance. In addition to nightly prayers, Lucien went to 7 a.m. Mass at St. Mary’s every day. He assisted as a server (we used to call them altar boys) at Masses until he was 100 years old.

He was very active in the Right to Life movement, marching in the Rally for Life in Montpelier well into his 90s, and regularly getting out the word about monthly Right to Life meetings in Addison County. The Vermont Right to Life organization honored Lucien with the Pro-Lifer Award in 2003.

“He was very proud of that,” son Mike said.

“A lot of people have asked him what his secret is,” Mike added. “He would point to the sky and say it comes from God.”

Always keeping some of the country lad inside him, Lucien found simple pleasure in swinging a scythe to cut down grass and weeds. When asked what made his dad happy, Mike answered quickly:

“He’d go down the road on Weybridge Street to a piece of Middlebury College property — he got permission — and he cut down the grass, pull out the weeds and bring home the hay to put on his garden.”

He liked handmowing so much that in 1978 he started a handmowing competition at Field Days. Every year it attracts a few score participants, and many more curious observers.

“He was participating in handmoving at 100, maybe at 101,” Mike remembers. Lucien hurt his back and had to stop competing a few years ago. But he really loved swinging that scythe. “He loved teaching that.”

Lucien himself liked to tell the story of how he taught his youngest daughter how to handmow and then she competed in the Field Days competition and got a higher score than her old man.

“You know, that’s OK, I am pleased,” he would say, probably with a twinkle in his eye. “Because that’s a sign I am a pretty good teacher.”

Mike said Lucien Paquette would want to be remembered as a man who loved people.

“He trusted people so much, and people loved him,” Mike said.

Did he ever get angry with people?

Mike didn’t think there was a lot that got Lucien angry, though sometimes people did disappoint him.

“I don’t remember him coming home from work and being in a bad mood,” Mike said. “He never held a grudge. He’d talk through the issue.”

Norris thought of Lucien as more of a mediator when it came to solving problems at Field Days.

“He always found the common ground,” she said. “He did it without a lot of adversity. He had a way of asking the question, but he had in his mind how something should turn out. It’s a great way to make people feel connected; people felt important and part of the solution.

“He saw the good in people.”

Lucien himself summed it up when he talked with Jane Vincent.

“I love people,” he said. “I think I can take some things that maybe some other people don’t. I don’t react too quickly. If someone says or does something that maybe could be irritating to me, I don’t look at it that way. I try to look at the positive answer.”

“My wife used to say to me sometimes, ‘Dad, why do you always say yes when somebody asks you for something or to do something?’ ‘Well,’ I said, ‘my work has been with people … It’s to help people with things that maybe they would like to get help with or need help or whatever it is. And so I feel if they have asked me they have a little confidence that I might be able to help them. And if I can, I feel I should.”

A memorial service for Lucien Paquette will take place this Saturday, 11 a.m., at St. Mary’s. See a full obituary here.