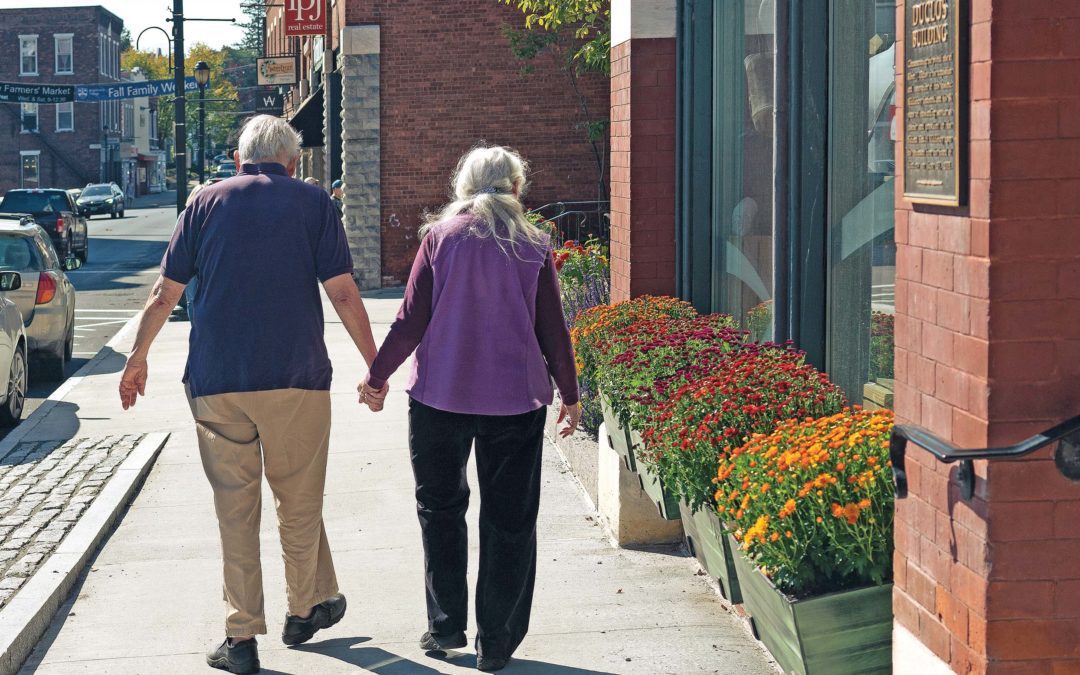 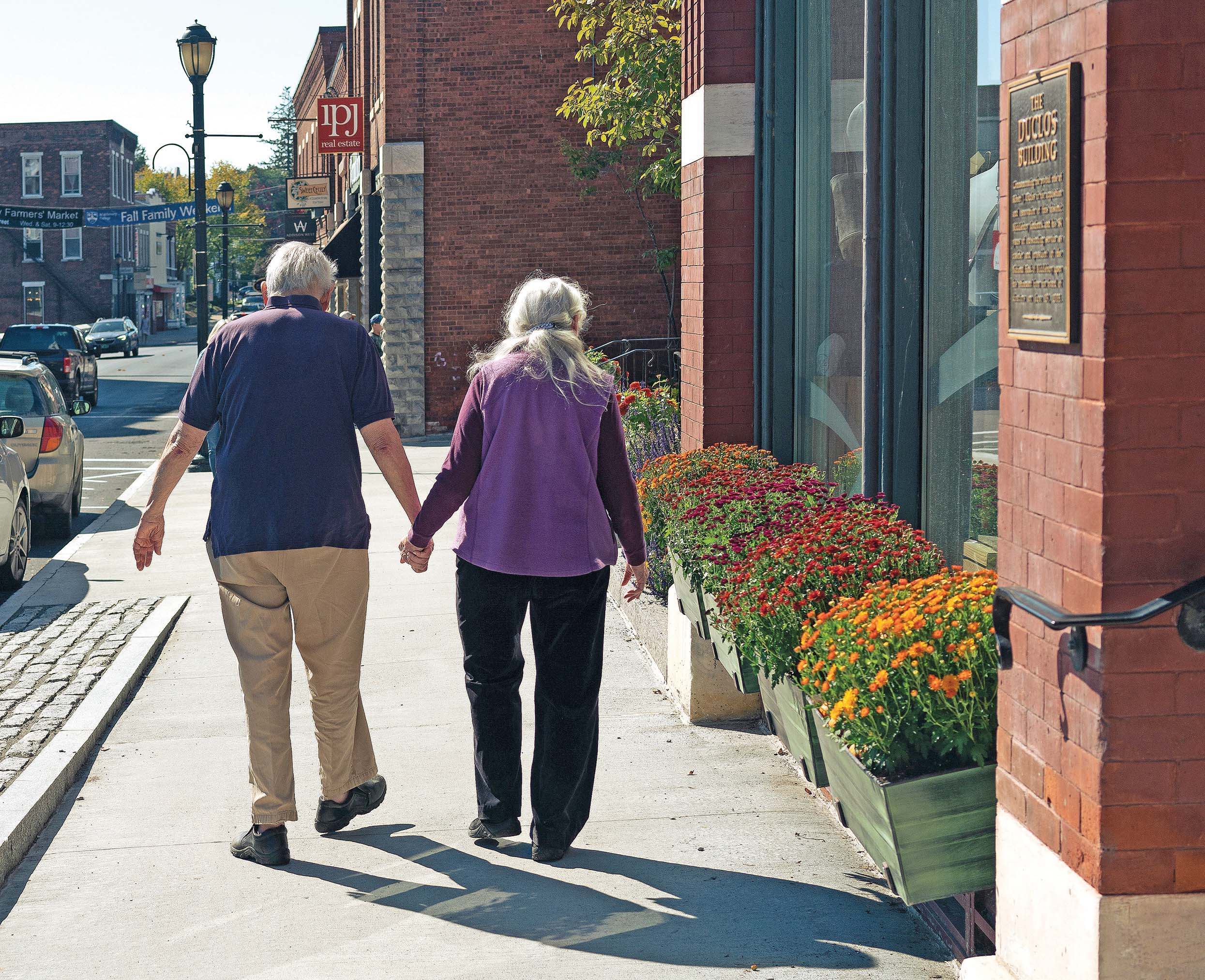 THE NUOVOS WEARING complementary outfits and holding hands are a common sight, including this recent shot of a Main Street stroll early last month. Independent photo/Florence Wu
By John Flowers

MIDDLEBURY — The town of Middlebury is home to many majestic sights — including the Otter Creek Falls, stately places of worship, and rolling, verdant hills.

But one of its most endearing and uplifting sights is the daily stroll of one of the community’s most senior and accomplished couples. If you’re lucky, you’ll spot Victor and Betty Nuovo just about any morning, walking hand-in-hand along Main and/or Weybridge streets. Both 90 years old and married for 68 years, the Nuovos breathe life into the impossible Hallmark image of a cute elderly couple united by decades of joy, challenges, victories, defeats and unbridled optimism.

The roots of two saplings intertwining and maturing into a single, sturdy tree.

“She’s beautiful, sweet, easy to talk to; it’s always been that way,” Victor said during a recent interview with his soulmate at his side. “It’s funny that when we started going together, it just seemed natural. We sort of recognized that we fit together, and that’s sort of the way it’s always been.”

It’s been a long, eventful road that led them to Middlebury in 1962, when Victor took a teaching position with Middlebury College’s Department of Philosophy and Religion. It was a year during which John F. Kennedy was president, Jamaica became an independent nation, and Johnny Carson took the reins of “The “Tonight Show.”

Betty embarked on a career as a lawyer — a self-made one, at that. She read 10 years of legal cases, then took and passed the bar exam.

How did it all begin?

Betty and Victor actually grew up in the same New York City neighborhood in Flushing, Queens. They went to the same schools, but, strangely, rarely crossed paths.

“You were a half a grade behind me,” Victor said, glancing at Betty. “We went to the same Sunday school.”

“Those were the days when the boys and the girls were kept on separate sides of the room,” Victor quipped, anticipating his wife’s next thought.

They made their connection, quite prophetically, at a wedding. And not just any wedding; it was that of Betty’s brother and Victor’s sister.

It was indeed a portent, as the in-laws would soon become life partners.

“I was a bridesmaid at the wedding, and Victor was an usher,” Betty recalled. “So we had to do things together. After (the ceremony), we sat on a bench, and we talked and talked. And we got to be good friends. He was my (brother in-law), and I liked him.”

The feeling was mutual, though Victor’s account was a bit more mischievous.

“You made a pass at me, and I was hooked,” he chuckled.

The longer their partnership, the more convinced they had each made the perfect choice. Victor found he had a lot in common with Betty, and he admired her altruistic spirit.

“You wanted to make the world better,” he said to her, tenderly.

Inspired and encouraged by the late Stan Lazarus, Democrat Betty Nuovo would go on to serve around three decades in the Vermont House representing the town of Middlebury. First elected in 1980, she was appointed to the House Judiciary Committee, which she chaired from 1985 to 1988. During her first stint in the House, from 1980 to 1990, Nuovo, an attorney by trade, sponsored Vermont’s first hate-crime bill and its first landlord-tenant bill, and successfully guided through both chambers a proposed constitutional amendment on equal rights for women. That measure, however, failed to advance through public referendum. 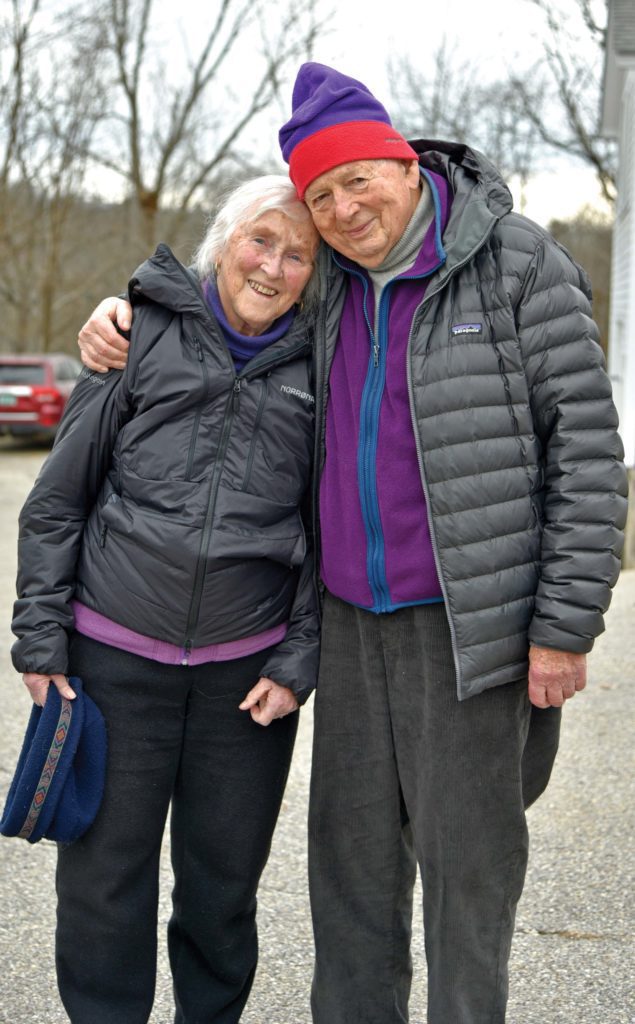 BETTY AND VICTOR Nuovo, one of Middlebury’s most accomplished and cherished couples, are each celebrating a 90th birthday, with 68 years of marriage and many accomplishments to reflect upon.
Independent photo/Angelo S. Lynn

Women’s issues were a particular priority for Nuovo throughout her legislative career. Along with championing the Equal Rights Amendment, she advocated for such issues as equal pay for equal work, and equal access to jobs and educational opportunity. She was among the first 100 women to become lawyers in Vermont, and practiced in Middlebury from 1974 to 1996.

Betty left the House in 1990 to focus on her legal practice, then was re-elected in 1997, serving on multiple committees before retiring from politics in 2017. Her civic résumé includes stints as a Middlebury selectboard member, local planning commission member and Addison County Regional Planning Commission delegate. She was also active with the Addison County chapter of the League of Women Voters.

Taking his cue from Betty, Victor also immersed himself in public service, joining the Middlebury selectboard from 2006 to 2014, and then from 2016 to November 2020. His tenure coincided with the planning and execution of some of the town’s most ambitious — and at times debated — projects, including the Cross Street Bridge, new municipal building and the downtown rail tunnel.

Through it all, Nuovo earned a reputation as the board’s senior statesman and moral compass. He was — and is — a “thinker,” pondering the impacts of decisions on constituents. He got a lot of practice during his “day job,” in his professorial role at the college.

“I’ve been fortunate to spend my life as a philosopher, getting paid for thinking about things,” said Victor, who retired as the institution’s Charles A. Dana Professor Emeritus of Philosophy.

“I’m still thinking about things, and I’m collecting retirement pay to do it,” he laughed. “And as Betty will tell you, I’m a worrier.”

Victor Nuovo continues to share his knowledge of all things philosophy through his regular column in the Addison Independent, which covers important issues from ancient Greece to 21st-century America.

Having each other well into their golden years has kept a little jump — OK, maybe a shuffle — in their step. Stairs are hard to negotiate, but each extends a helping hand to the other.

“I’m not running, or running for office,” Betty said wryly.

Still, she and Victor stay busy. He with his writing, reading and thinking. She with reading, games and puzzles.

“We like to take walks together,” Victor said. “We both have bad hearts, so we have cardio rehab at the hospital and that helps us keep fit.”

“Yes, we want to keep our hearts going,” Betty chortled.

They’ve proven there’s plenty of heart between them.

But getting older is frustrating, they acknowledged.

Though taxing, the cardio and other physical rigors are paying dividends. The Nuovos are pleased to remain self-sufficient as they enter their 90s.

There is a lot of road in the rearview mirror and still more ahead.

The Nuovos still marvel at their journey together.

“We’ve been married 68 years,” Victor said, glancing down while gently shaking his head with incredulity.

“Is that all?” Betty asked. 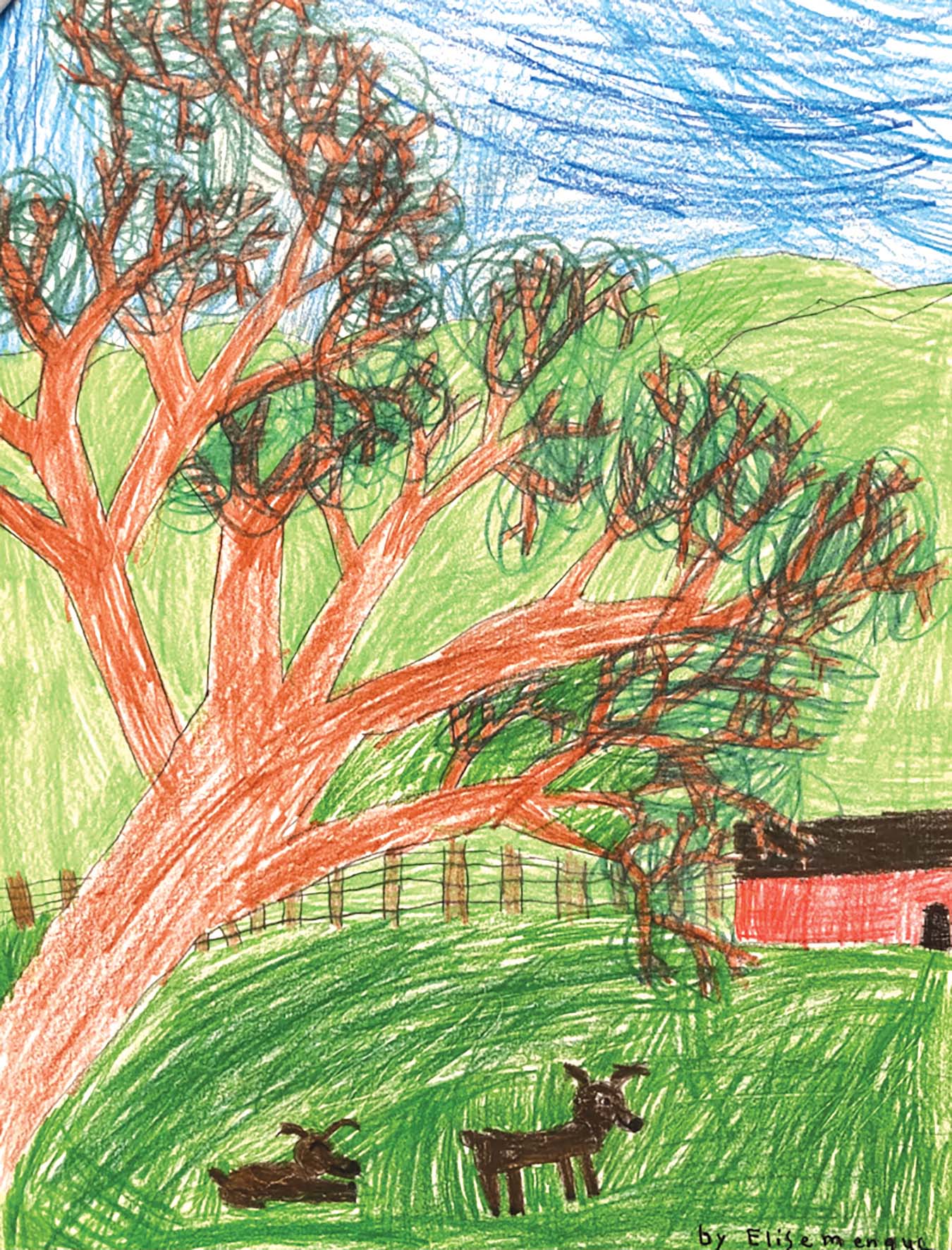 Orwell youth is third in Growing Works of Art contest 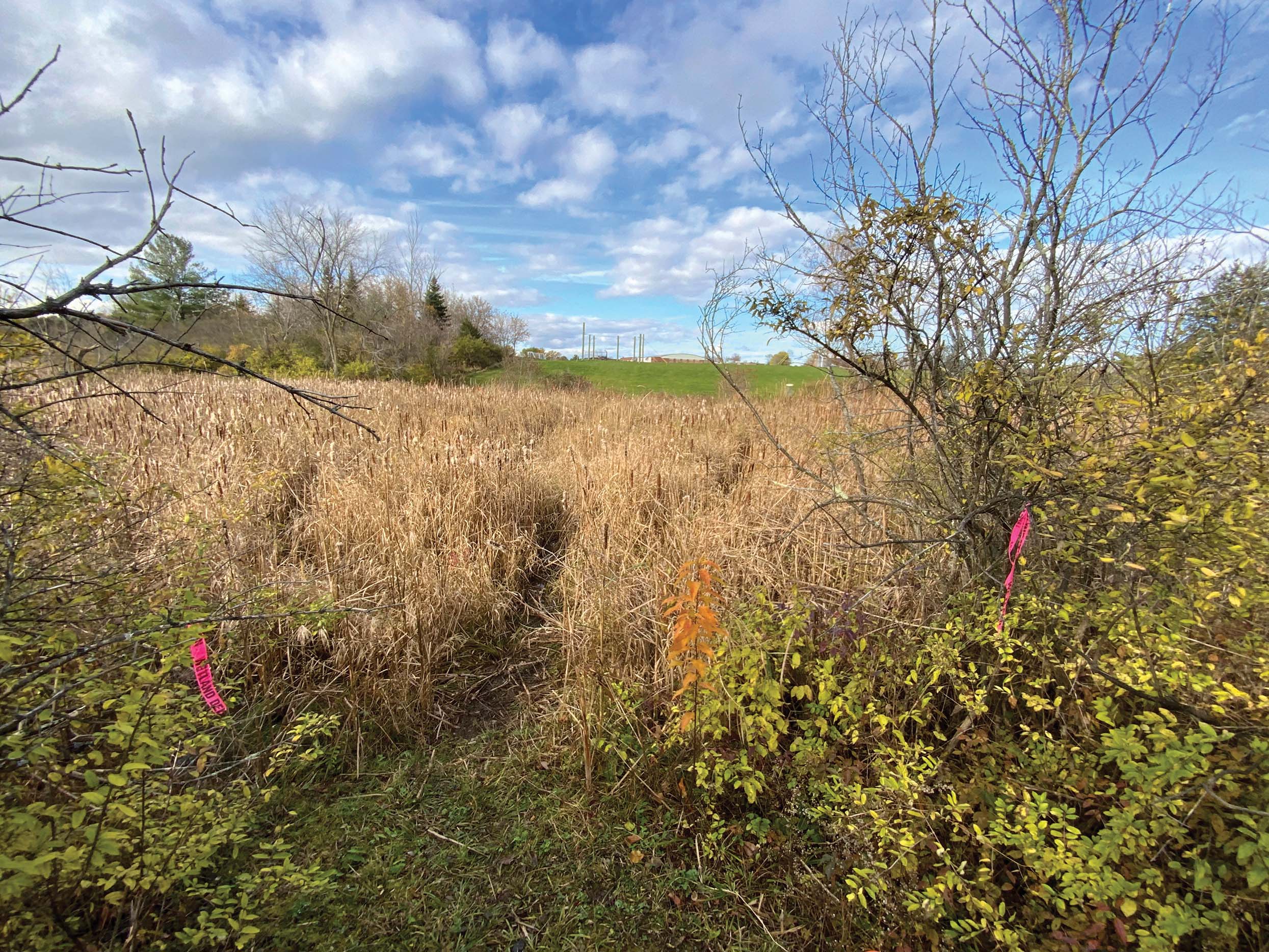 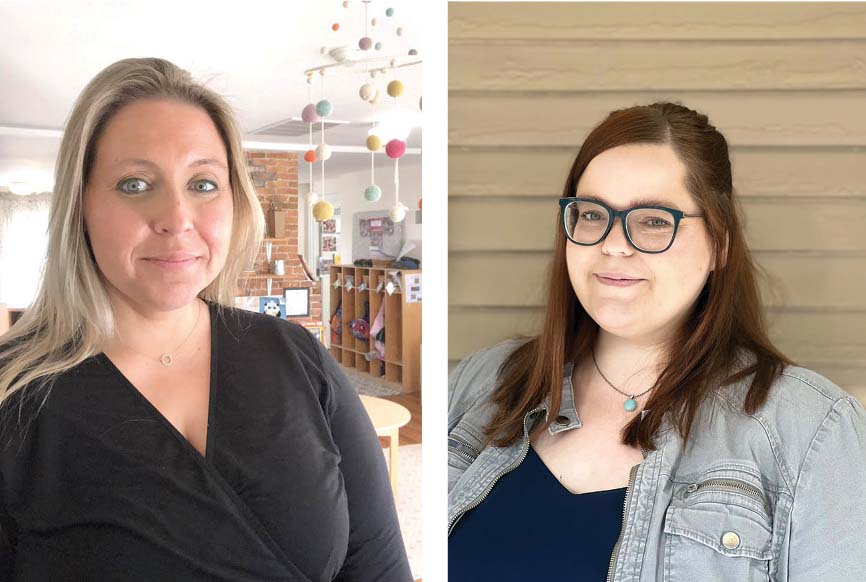