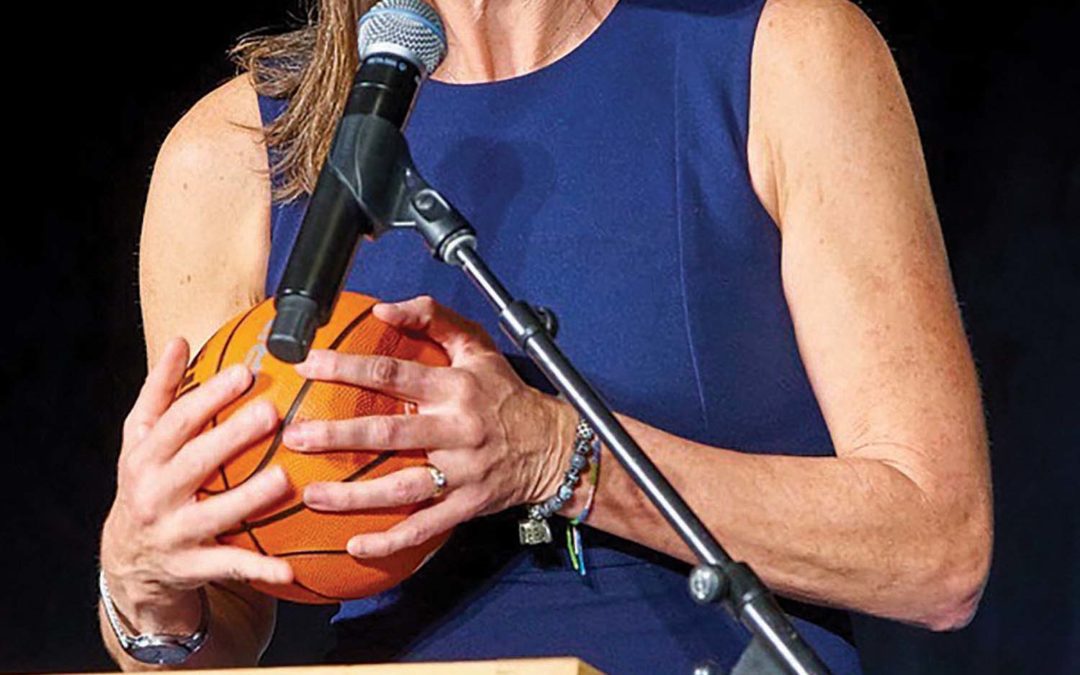 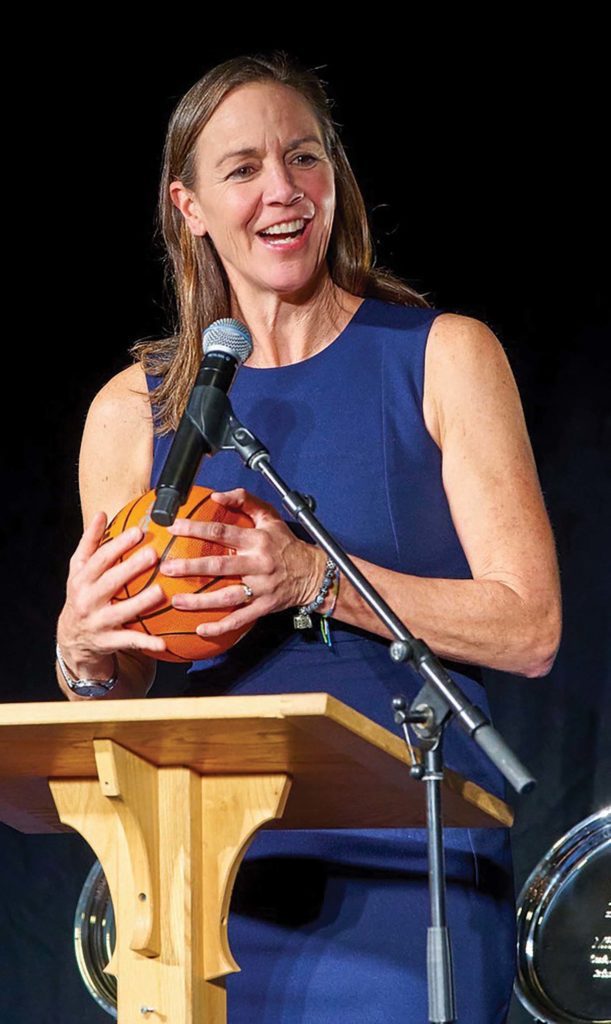 IN HER HALL of Fame induction speech, Caroline Leary Dowd ’92 described herself as a “gawky 18-year-old freshman carrying a basketball around under her arm.” Her 1,364 career rebounds are 562 more than the Panther player in second place. An American Civilization major at Middlebury, she now teaches middle school social studies and English in California.
Photo credit: Todd Balfour

In basketball, what is it that makes a great rebounder?

But what most significantly makes a great rebounder is easy to identify: It’s effort! Heart. Determination. Relentlessness. Effort.

Caroline Leary Dowd, class of 1992 at Middlebury College, had all these capabilities in abundance.

On Saturday, Nov. 6, she was inducted into the Middlebury Athletics Hall of Fame as a member of the 2020 class of honorees, in a modest in-person COVID-safe ceremony, and not the usual more-the-merrier celebration in Nelson Arena.

Nonetheless, it was a warm and happy occasion after the 2020 ceremony was postponed by the pandemic. Caroline joined seven other athletes from track and field, swimming and diving, skiing, ice hockey, field hockey, lacrosse — four women and four men, representing classes ranging from 1958 to 2002.

Caroline’s Middlebury records are unlikely to be broken for a long time, perhaps ever: single game record for rebounds – 34; single season average – 20 a game; career average – 17 rebounds a game. Her total rebounds in her career — 1,364 — is 562 more than the player in second place. In 1991, she led the nation in rebounds with 20 a game.

Such domination was hardly because she towered over her opponents. In fact, Caroline, a shade under six feet, often was guarding and fighting for rebounds against taller players. Her coach, Amy Backus, described her as “an undersized post player but who had the tenacity and heart of a lion.” Amy corrected herself, “I mean, a Panther.”

“Off the court,” Backus recounted in a conversation last week, “Caroline was a carefree, goofy, free spirit, a California girl. But she had a totally different personality on the court. She was strong, relentlessly focused: She really got after it.”

Her teammate, Sladja Kovajanic Carton, the most prolific scorer in Middlebury women’s hoop and herself a 2015 Hall of Fame inductee, called Caroline a “fearless fighter and tireless competitor.” The captain of the 1991 team, Erica Moody said, “No one outhustled No. 23. She left it all out on the court.”

It must be pointed out that Caroline was hardly a one-dimensional player, the great rebounder. She was also a great scorer. She is third on the Middlebury women’s all-time scoring list, just 17 points behind number two.

In her acceptance speech, Caroline brought a prop to the podium: Her family provided her with a miniature basketball, and she recalled her 18-year-old self as “a gawky freshman, a tall girl carrying around a basketball under her arm. Basketball was more than a sport to me. It was my identity.”

She loved the game from the very beginning. “As a kid, I used to shoot baskets in the yard, deep into the dark night.” An outstanding player at Branson High School in Ross, Calif. (she’s in their athletic hall of fame), she came to Middlebury, sight unseen, having never been to Vermont. Her dad actually claims the first Middlebury connection — he attended Bread Loaf for a summer.

“It was just meant to be,” she says now. 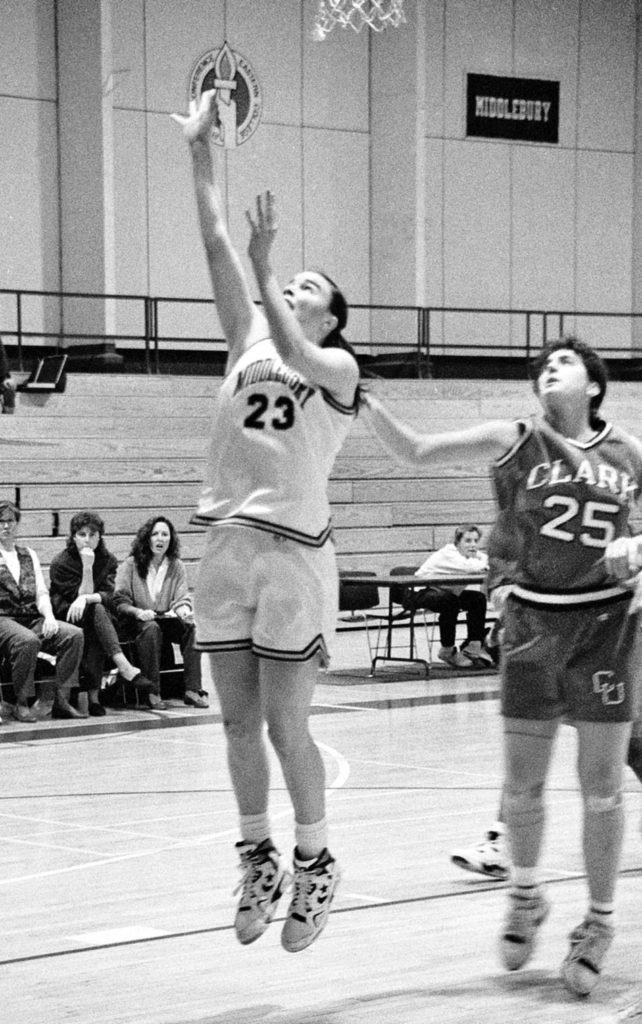 CAROLINE LEARY DOWD scores on a putback in a game in 1992. She was formally inducted into the Middlebury College Hall of Fame this month.
Photo courtesy of Middlebury Athletic Communications

Caroline met her husband of over 25 years now, Warren Dowd, in her sophomore year at Middlebury. After graduating with a major in American Civilization, she earned an M.A. in journalism from Boston University and worked for five years in news for Boston radio behemoth WBZ. Her “Second Chapter” was spent raising their four children (two in high school, two in college now) for a number of years.

She is now fully occupied in her “Third Chapter,” teaching social studies and English at Miller Creek Middle School in San Rafael, not far from where she grew up. She reports that her seventh-graders are mighty impressed with her Hall of Fame hardware.

You would think a team with the top rebounder, Caroline, and the top scorer, Sladja, in Middlebury College women’s basketball history, would have a pretty good team — and you would be right.

In Caroline’s four years (three with Sladja), the team went to the East Coast Athletic Conference tournament three times and were ECAC champions in her senior year. Only four teams (of 60) were invited. This was before the NESCAC tourney and before teams were allowed to go to the NCAAs because of the interruption to students’ academic commitments.

Coach Backus again: “We had an exceptional team with great chemistry. We had shooters, rebounders, defenders and everything in-between! They were a great, great group.”

Speculation on how that 1992 team might have fared in a larger regional or national tournament is irresistible. They were joined that season by a “really athletic” transfer student from the University of Washington, Chris Pagano, who is fourth on the all-time scoring leaders list with over 1,200 points (in three years), averaging 20 a game.

Caroline is unstinting in her praise for her coach. “Amy was the perfect combination of trusting us and directing us. She had high expectations but was really supportive: we knew she really cared about us.”

Amy Backus is retiring this year from a brilliant career in athletics. After Middlebury, she was the head coach at Northwestern and Yale, before moving into athletic administration, first as the senior associate athletic director at Yale, and for the past seven years the AD at Case Western Reserve University in Cleveland.

In the final analysis, it wasn’t Caroline’s scoring and rebounding that most impressed her teammates and coach. “Caroline was a free, kind, and generous spirit with an infectious smile and laugh,” Amy Backus said. “She was everybody’s favorite.”