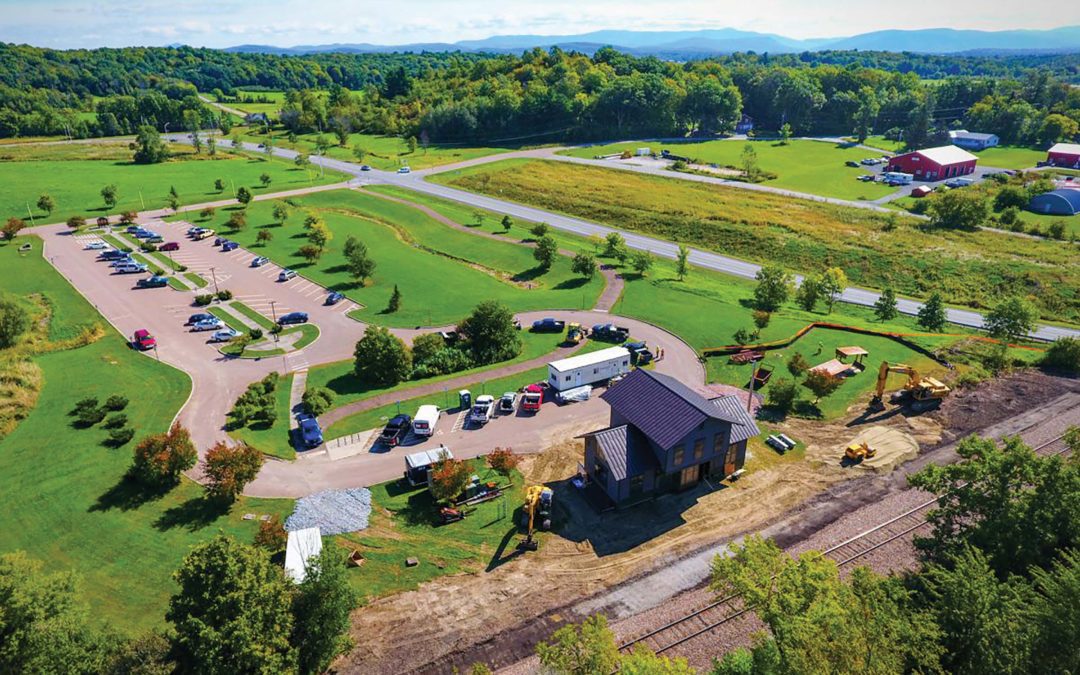 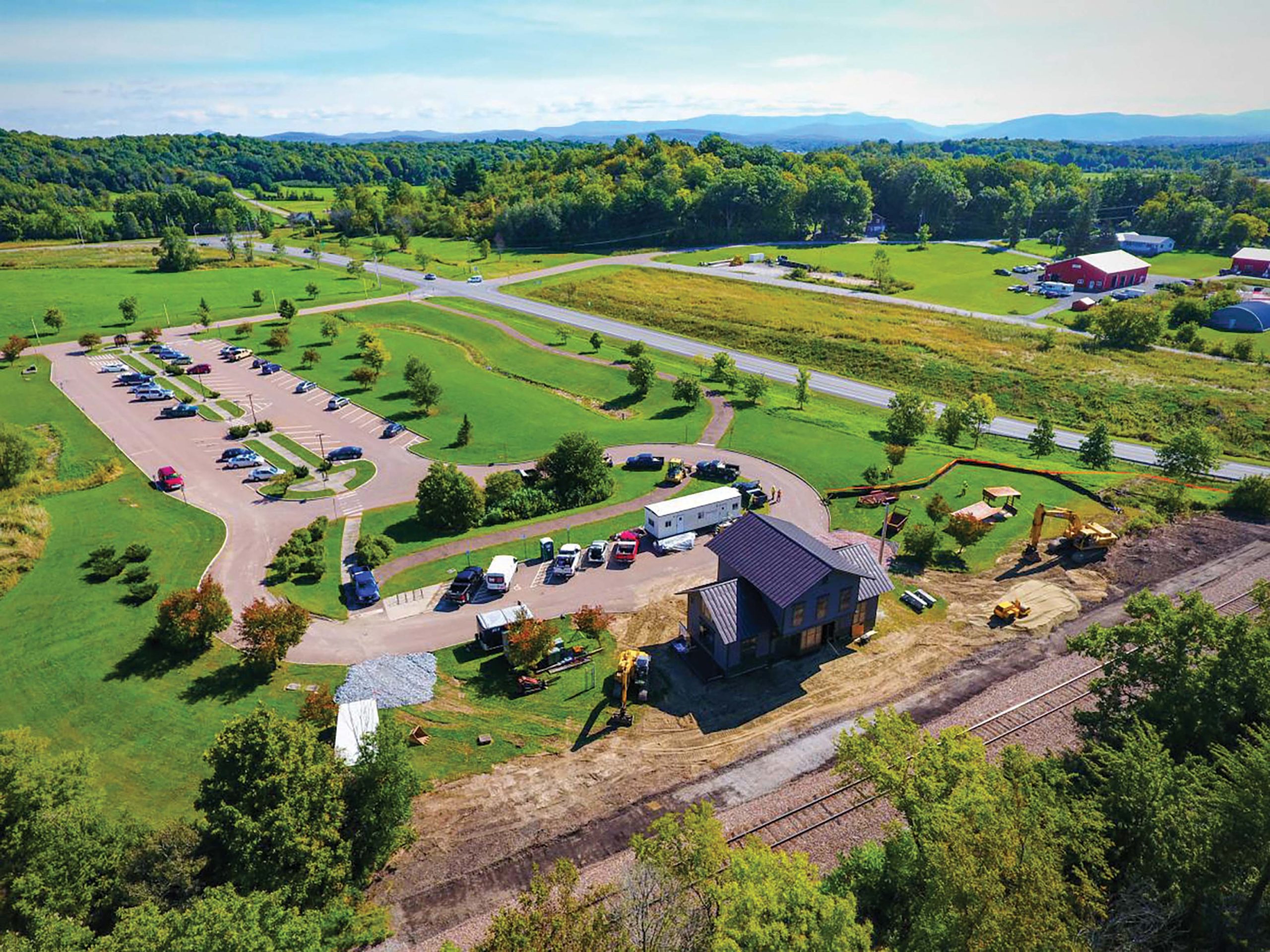 THIS IMAGE SHOWS the Vergennes rail station ground being prepared for a passenger platform at the Ferrisburgh Park and Ride off Route 22A, near Route 7. That station, and another one in Middlebury, will accommodate passengers of the new Rutland-to-Burlington extension of the Ethan Allen Express, set to debut early next summer. Photo courtesy of VTrans
By John Flowers

MIDDLEBURY — The long-absent refrain of “all aboard!” is expected to ring out once again at new passenger train stations in Middlebury and Vergennes in about seven months, according to Vermont’s top rail official.

Dan Delabruere, Rail and Aviation Bureau director with the Vermont Agency of Transportation, said he’s confident the new Rutland-to-Burlington extension of the Ethan Allen Express will commence rolling in “late June or early July” of 2022. The new service will restore a passenger rail option in Addison County following a multi-decade hiatus, and will give folks boarding in Middlebury and Vergennes service north to Burlington, and south to Rutland and New York City.

“It’s going to be a great benefit to the western part of the state to get the Ethan Allen running … to  Vermont’s largest city, where it’s really needed,” Delabruere told the Independent on Monday. “All the college kids in Middlebury and Burlington are now going to be able to take advantage. This is going to get people a direct connection from downtown Burlington to NYC, without even getting in a car.”

State officials had hoped to get the Ethan Allen extension operating this year, but VTrans has experienced significant delays in getting some of the supplies needed to upgrade the rail line. Particular irksome to Delabruere has been the absence of track switches to ready the Burlington railyard for the train.

“We have to put in an extra track at the Burlington railyard in order to store the Amtrak train overnight,” he explained. “When you add one track, you have to slide a bunch of other tracks over and adjust the yard. We ordered a bunch of new switches for the yard to make this happen. But what would normally take three months to order switches and get them in, we ordered them six months ago and we still don’t have them.”

The COVID-19 pandemic has caused a lot of delays in the business and transportation industries. Production tapered off during the crux of the pandemic. Production is now back in swing, but orders have exceeded available product.

“What I can’t control is when those switches arrive,” Delabruere said. “We’re now getting a forecast that it’s going to be sometime in the winter. Well, once you get them in the winter, you can’t do anything with them until the spring.”

Middlebury’s new passenger rail platform — which hugs the tracks between Seymour Street and the Marble Works complex — is nearing completion. It includes a 300-foot deck and a 200-foot canopy, with lighting.

“There are some finishing touches that shouldn’t affect anything, as far as next summer,” Delabruere said.

Meanwhile, Vergennes will be served by a newly remodeled train depot and new platform at the Ferrisburgh Park and Ride off  Route 22A, near Route 7.

“Vergennes is actually done; we’re ready to go,” Delabruere said. “The only thing left to do there is to find a station agent to occupy the building. Other than that, we’re physically ready to go.”

Other upgrades left to be completed include:

“As soon as I can get all those (rail) switches done, we can finish up the final work on all things that go through Maple and King streets,” Delabruere said.

“Everything is hinging on getting these switches.”

The real portend of rail service is already getting some folks excited about buying tickets. That’ll have to wait for a while, according to Delabruere. Fare prices have yet to be finalized for the Rutland-Burlington extension of the Ethan Allen Express, but he assured that a ticket won’t cost any more than $18 for one-way travel within Vermont.

The days of buying those tickets from a train station office are long over; you’re going to have to buy yours online. For years, the stations had automated ticket stands, but they’ve fallen out of favor, according to Delabruere said.

“They were costing Amtrak a lot of money to maintain and no one was actually using them, because smartphones were quicker,” he said.

Passengers will either make reservations on their home computers and print out their tickets on paper, or do it on a smartphone that can then be scanned on the train. Customers will also be able to buy their tickets on the train, using an ATM/debit or credit card. No cash accepted.

Delabruere said around $100 million in state and federal funds will have been spent during the past 12-15 years on rail upgrades associated with the Ethan Allen’s Rutland-Burlington extension.