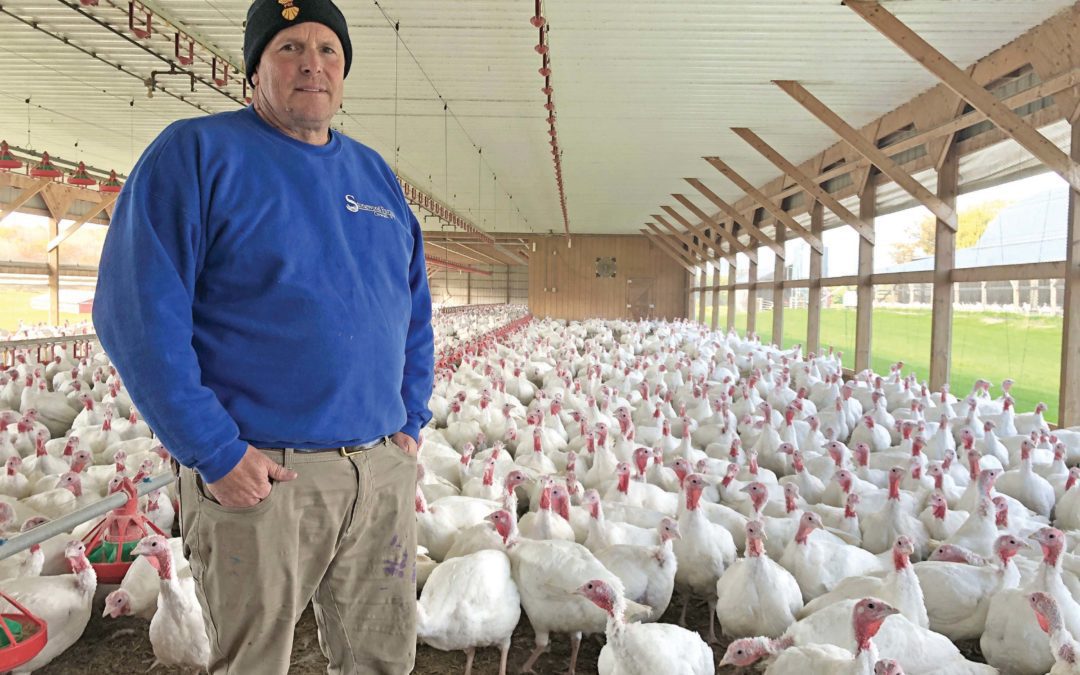 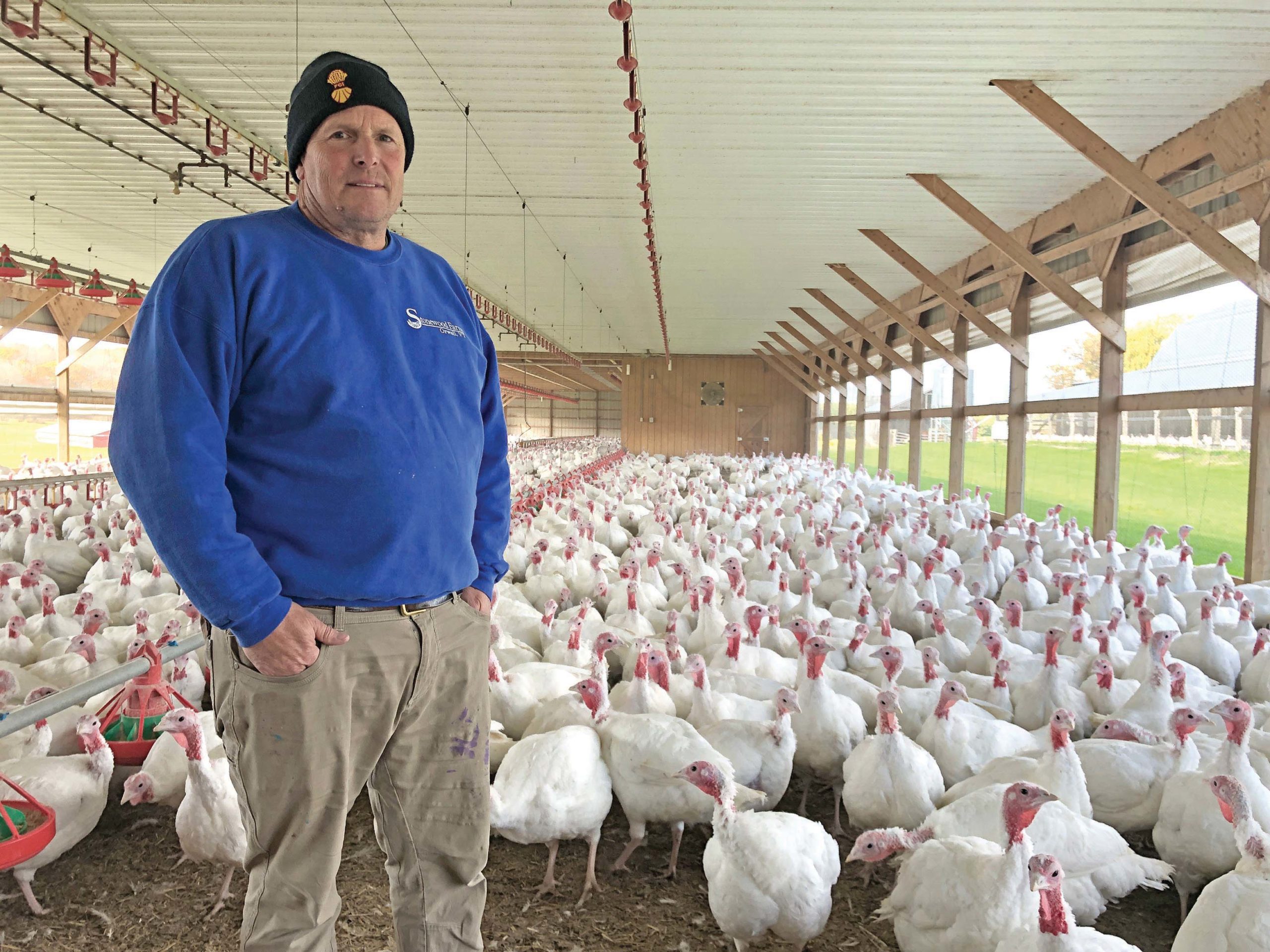 THANKSGIVING SEASON HAS begun for Peter Stone, owner of Stonewood Farm in Orwell. Stonewood raises and processes more than 30,000 turkeys a year and expects to sell half of them this month. The rest are processed for value-added products like sausage and ground turkey. Independent photo/Christopher Ross
By Christopher Ross

To find out more about which local products are available for your Thanksgiving table this year, check out ACORN’s Eat Local VT mobile app, which can be found at acornvt.org/app.

ORWELL — If sales data from Stonewood Farm are any indication, more people are planning to host Thanksgiving meals this year, compared with 2020 during the first year of the pandemic. And they’re expecting larger parties at their tables.

“We sold smaller turkeys last year,” said Peter Stone, owner of the 800-acre family farm in Orwell. “And we are definitely selling bigger turkeys this year.”

Thanksgiving is celebrated on the fourth Thursday of November, which this year falls on the 25th.

Stores such as the Middlebury Natural Foods Co-op — and hundreds more across New England and New York — have until Nov. 15 to place their final orders for Stonewood turkeys, so Stone doesn’t have all of the data yet. But to date sales in 2021 have been higher than in previous years, he said.

Stonewood Farm raises and processes more than 30,000 turkeys a year, making it the largest turkey operation in Vermont. Addison County’s other major turkey purveyor, Misty Knoll Farms in New Haven also raises thousands of meat birds, but many of them are chickens.

Thanksgiving is of course the most busy time of the year at Stonewood, and the farm usually expects to sell about half of its turkeys in November.

Peter Stone’s parents, Paul and Frances Stone, purchased the farm in 1976. Back then it was a dairy farm.

After about a decade, “my father didn’t want to milk cows anymore,” Stone said, so he did some research and was intrigued by turkeys and the history of turkey farming in Vermont.

That history, as VTDigger columnist Mark Bushnell pointed out in 2016, goes back more than 200 years.

Bushnell describes a pre-railroad Vermont, where turkey farmers had to walk their turkeys to market, which was sometimes as far away as Boston.

Supply wagons accompanied the farmers and their birds, carrying food and tents “and enough corn to help the birds maintain their weight during the trip,” Bushnell writes.

“The whole contingent hit the road as early as possible each day and walked until about nightfall,” he continues. “As dark approached, one of the lead birds would flap its way into a tree, and that was it. The day was over. The other birds would immediately find their own places to roost and nod off.”

By the time Paul and Frances Stone acquired their first 300 turkeys in 1987, the industry had become somewhat more … refined. 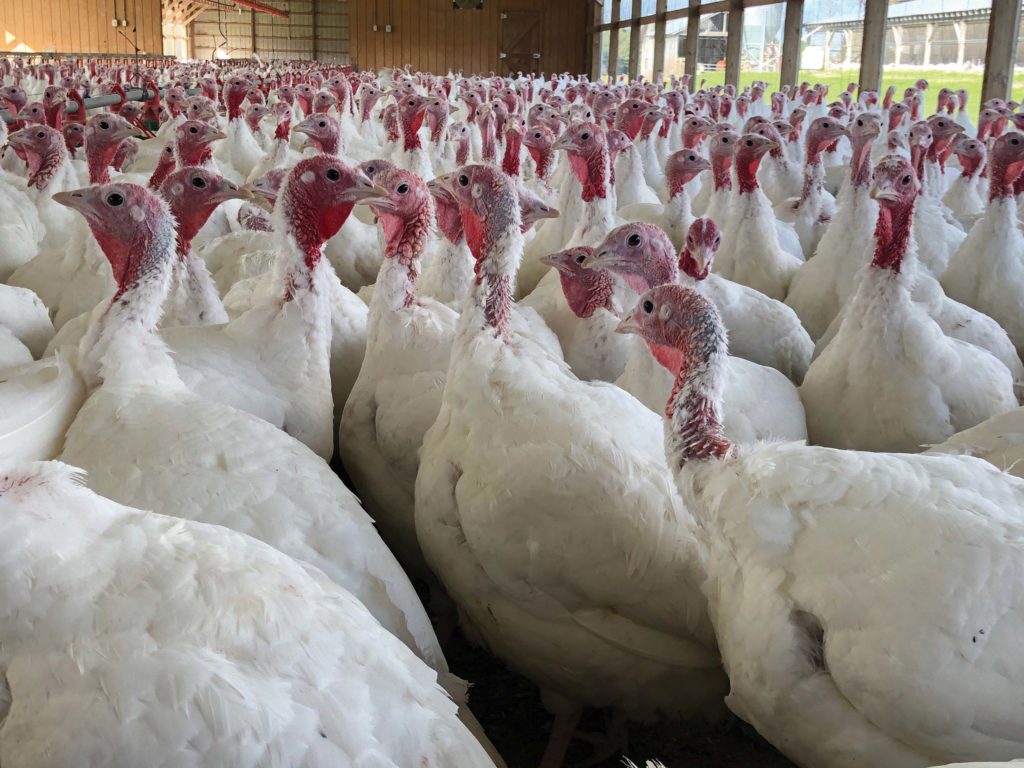 TURKEYS ARE INTENSELY curious animals, says Peter Stone of Stonewood Farm in Orwell, and if left unchecked they will crowd in on one another and keep pushing forward to get a glimpse of whatever has caught their fancy. Many of these fine-feathered creatures will end up on Vermont tables for Thanksgiving this year.
Independent photo/Christopher Ross

Within two years they had expanded their turkey operation tenfold and sold off the cows.

Peter Stone purchased Stonewood from his parents in 2009 and operates it with his wife, Siegrid Mertens; their three children, Nathan, Patrick and Catherine; and a handful of fulltime employees, plus seasonal help in the fall.

Stonewood houses its turkeys in seven open-sided barns of roughly the same size — about 12,000 square feet, give or take.

The farm starts getting poults (baby turkeys) in June. Staggered deliveries and pickups from suppliers in West Virginia and Canada throughout the summer ensure that Stonewood is able to raise the birds in batches — it’s not set up to raise tens of thousands of turkeys all at once.

The youngest turkeys are housed in one of Stonewood’s three heated starter barns. At first, they’re kept in pens that contain no more than 300 birds at a time, Stone said, because they tend to crowd together too much if left to their own devices.

Once they reach a certain age, the turkeys are moved to a different barn to make way for the next batch of poults, and they’re allowed to roam the new barn at will. Food and water are delivered automatically through a mechanical system that runs down the center of the barn.

Stonewood spends the summer and fall raising birds, and then goes into high gear in November, processing Thanksgiving turkeys seven days a week from 7 a.m. to 7 p.m. The Stones accomplish this with the help of a number of Jamaican workers with H2A visas, who also help with packaging and storage.

The farm sells 99% of its turkeys to stores in New England and New York, and uses four different distributors for that purpose, including Black River Produce in Vermont.

But the Stones will also sell directly to customers, and every year about 150 people will take them up on that offer.

“They’re mostly local,” Stone said, “but some come from as far away as Rutland.” 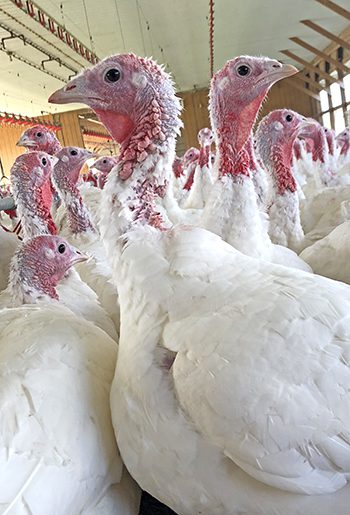 When the busy season is over, Stonewood spends December to April processing its remaining turkeys for value-added products like sausage, ground turkey and boneless turkey breasts. These are also sold throughout New England and New York.

When the Independent visited Stonewood Farm this past Friday a sea of little white heads gathered along one side of a barn — thousands of turkeys jockeying for position, and a glimpse of what was passing by.

“Turkeys are very curious creatures,” Stone said. “They’re curious about everything they see.”

Which is fine until they start crowding together and pressing forward against a wall or wire-mesh window. When people stop outside the barns to look at all the turkeys, Stone sometimes has to ask them to keep moving, to prevent a bird pileup.

Turkeys will also eat anything they can swallow, including rocks, which get stored in their gizzards to help with the mechanical breakdown of their food.

As charming as they are, it seems like it would be tempting to name a few of them, or maybe even keep a couple as pets.

“Yeah, I don’t think that’s a very good idea,” Stone said. He paused. “But my daughter does.”

“She always wants to keep them,” he said.

This year Stone let Catherine keep two of the turkeys. They were smaller and weaker than the rest.

Stone put them in a special enclosure, but Catherine was doubtful about their safety. Wouldn’t they be vulnerable to predators?

No, no, Stone told her. They’ll be fine here. 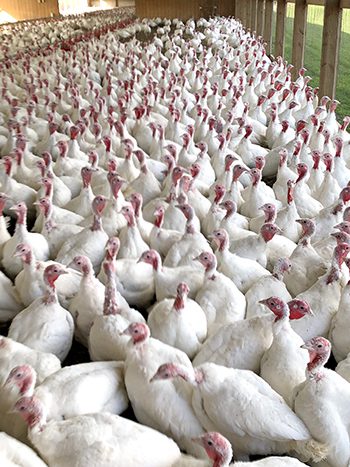 “Then one morning we got up and they were gone,” Stone said, ruefully, his hardy practical farmer’s countenance softened for a moment by fatherly tenderness. “Probably foxes.”

The secret to Stonewood Farm’s turkeys — “just plenty of Vermont air, cold nights, good feed and tender loving care on our family farm” — has been attributed to both Grandpa and Grandma Stone (Paul and Frances).

There’s nothing secret, however, about Stonewood’s standards: turkeys humanely cared for and processed, without hormones, antibiotics or feed containing animal byproducts.

“A lot of people ask us if our turkeys are gluten-free,” Stone said. “The answer is yes.”

He pointed out that turkeys are naturally gluten-free, but that sometimes — though not at Stonewood — wheat is used as an ingredient in the brine.