Bristol parent speaks out about BES 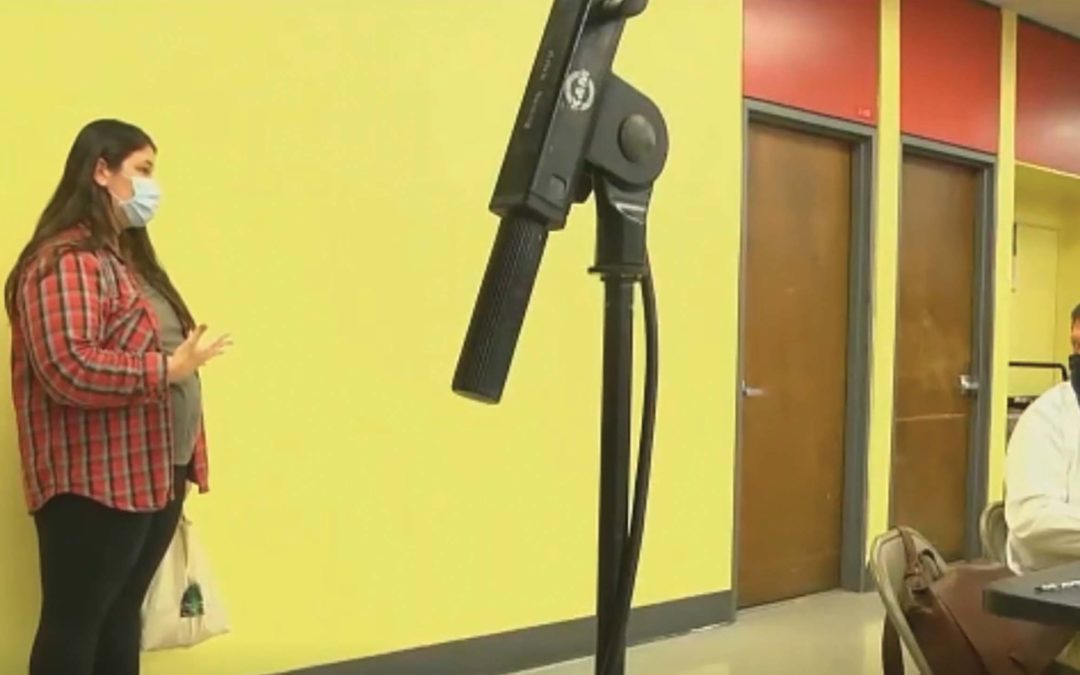 Bristol parent speaks out about BES

BRISTOL RESIDENT KELLY Hedley, left, speaks about an experience her son had at Bristol Elementary School during the Oct. 12 meeting of the Mount Abraham Unified School District. Superintendent Patrick Reen and board chair Dawn Griswold look on. Image courtesy of Northeast Addison Television
By Christopher Ross

BRISTOL — When Kelly Hedley, a parent in the Mount Abraham Unified School District, spoke at last week’s school board meeting in the high school cafeteria, she stood alone.

The staff at Bristol Elementary School had just presented statements to the board detailing safety and policy concerns after incidents the previous week had led, among other things, to the destruction of a classroom there.

First on the staff’s list of requests to the district was “Provide for the safe removal of students who endanger the safety of themselves, other students or staff to an alternative and safe workplace until their behavior has been assessed by a professional mental health crisis team, parents/guardians have been contacted, a meeting with parents has been scheduled, the classroom teacher and staff members have been apprised of the situation and the child has remained calm, safe and in control for 24 hours after the episode.”

Hedley was grateful the staff had spoken out at the meeting — and that dozens of parents had come to support them. Being the parent of a child who has been removed from a classroom, she also wanted to add some additional insights to the conversation.

But when Hedley mentioned her child, MAUSD board chair Dawn Griswold halted the discussion — which Griswold had promised she would do if she felt the board was at risk of violating student confidentiality policies and laws.

“I was hoping to share just a different perspective as a parent who has been through what is being advocated for,” Hedley told the Independent. “One of the things that the teachers are advocating for is removal of the child, and my son was removed from a classroom at that school.”

Hedley was eventually invited to speak privately to the board during an executive session. Though she didn’t necessarily agree with the reasoning behind halting the public discussion, she accepted it, she said.

“I accept that those are your rules and they’re put in place for a reason,” she said.

After that, “I spoke, and they listened, and that was all,” Hedley said, though she noted that some people in the room were in tears.

Hedley has been telling the story of her son (who was not the child involved in the incident detailed last week) for four years, she told the Independent, but she doesn’t feel it’s had an impact.

“So I don’t hold a lot of faith that it will make a huge difference now. All I know is that I want change as much as everybody else, and if I don’t do everything in my power, then that’s on me, personally. So I keep just knocking on doors.”

And because it can sometimes be challenging for him to communicate in the same ways as other children, he’s less likely to ask for help when he needs it. This is especially true if he feels overwhelmed or anxious.

“His brain gets overloaded and he goes into what I call ‘processing mode,’” Hedley said. “That’s kind of how we refer to it. And what that physically looks like is that he puts his head down and closes his eyes and is nonverbal.”

At Bristol Elementary staff would often walk with him in the hallways, Hedley said. But on occasions when that wasn’t possible, he would sometimes struggle. Occasionally he would have to stop and sit down on a bench to process.

One time, about four years ago, he was so overwhelmed that he lay down on one of the benches and fell asleep. Soon afterward, Hedley said, there was a fire drill in the school, and “he was unaccounted for.”

If it had been a real fire, “my child would most likely be dead now,” Hedley said. For her, this was evidence enough that her child needed help from the school.

In the spring of 2017 Hedley’s son felt overwhelmed in his class and “went into processing mode.” Head down, eyes closed, nonverbal.

“This can go on for a short amount of time or a long amount of time,” Hedley said. “It’s not violent, but it can be disruptive to learning,” she acknowledged.

On this particular day her son wasn’t responding to the need to change classrooms.

“I believe (school officials) when they say that they thought that they could just kind of like gently tip him out of a chair, maybe that would get him to stand up on his feet, because it was during classroom change, and they needed him to move his body.”

But her son fell to the floor when they did this, Hedley said.

“He didn’t land on his feet in a standing position,” she explained. “So my son’s perception was ‘They flipped me out of my chair onto the floor’ — that’s how he thought of it and I can see both side of the situation.”

He responded by punching the principal and throwing something at another school official.

“He was scared,” Hedley said. “He was in a place he thought he needed to defend himself. And again, I can see that from both sides. I’m not saying he should have punched the principal but that’s the truth of what happened.”

School officials provided Hedley with conflicting reports about whether or not her son was restrained in the classroom, and she shared those reports with the Independent, but she was there personally to witness the aftermath, she said.

Hedley, who happened to be at the school for a meeting at the time, said she heard her son “screaming and crying” and “went to the planning room and saw him behind a closed door,” with a school official standing in front of the door.

The “planning room,” also referred to as a “de-escalation room,” is a space that schools use to “give students a private, safe space to regulate before returning to their classroom,” said MAUSD Superintendent Patrick Reen this past August. Reen had been responding at the time to the Independent’s inquiry about recent renovations to that space at BES.

Whether or not Hedley’s son was restrained and secluded is a legal issue beyond the purview of this article, but Hedley feels it’s urgent, as the community examines recent incidents at BES, to consider all possible angles and potential impacts of policy choices.

“I’m glad this is surfacing,” she said. “I’m glad there are so many eyes now on what is happening. I’m glad the teachers have banded together and are able to advocate. But if we’re talking about ‘safe removal’ it’s important to say, ‘Well, what does that look like? What are the effects of that?’ From my experience what it looks like is not a safe removal, it’s not without consequences to the children, to the teachers.”

This is not to say Hedley is opposed to staff proposals for reform.

When Hedley tries to convey her own perspective she often feels alone in doing so.

“Asking people to see something through a different lens can be really hard,” she said, “and it can hard to be equally heard. I know that. I accept it. But it does feel like an uphill battle.”

Some of the comments advocating for violence against children involved in the recent BES incidents have appeared on the Independent’s Facebook page, Hedley pointed out.

She doesn’t know the children who were involved in the recent destructive incidents at BES, and she does not know their families, “but I see myself in them, I see my child in them, and I hurt so bad that as a community this is one of the responses to them. This is a child and a family that are very much being attacked by community members. I can’t even imagine what it would be like if this were my son who was struggling and all of this (negative social media attention) was directed and focused on him.”

Hedley, too, has taken to social media. In an Oct. 14 Front Porch Forum post she shared some of her experiences in the school district, then preemptively defended herself, in part because “I went to the grocery store last night and I left an aisle because a group of women were talking so derogatory about these children.”

“Where was I?” she wrote. “Well I lost my job due to how many times I was called to pick (my son) up. Often due to him not being violent but being ‘not ready to learn.’ … I was in communication multiple times a day with the school. I got a lawyer. I did a 5-hour mediation. I begged and cried for them to do what’s in all of the children’s best interest and send him to another school … I was advocating.”

Potential community reactions are part of the reason Hedley is less than comfortable about appearing in the newspaper.

“It is slightly scary,” she said, “but with that said … every step I’ve made has been scary. I can’t let fear decide our fate.”

Hedley is also afraid about repercussions from the district. Like other residents, she has said publicly that the incidents at BES — as well as the experiences of her son — are part of a larger issue: the “school district not properly supporting our special needs children.”

It is the district, however, that has the final say in what kinds of services her son, who now attends Mount Abe, can receive — services she says she’s currently attempting to secure.

“But if I need to be the first person to step forward, that is OK with me,” she said. “I believe that positive change will happen in some form from it. I also believe that there will be some negative responses,” she added. “I probably won’t look at the comments, though.”

The Independent has received several letters to the editor in recent days, reacting to the revelations made at the Oct. 12 MAUSD board meeting.

“In 2017 when I was a teacher at BES, I was concerned about the emotional well being of my class, as disruptive and challenging behaviors occurred for weeks in my classroom,” writes retired BES teacher Peg Sutlive in today’s edition. “When I asked for help, I was told to collect data. Later that year, when a child with high needs moved to our school with documentation stating the need for one-on-one support, I was told to collect data. The system is not set up adequately to support children with challenging behaviors, who need critical social-emotional support.”

Sutlive urges the district “to address this need that has been happening and escalating for years. The systems, protocols and supports are not working for students with challenging behaviors. BES had a system in place many years ago where students with behavior challenges/mental health needs had support, so I know it is possible.”

Other community members have spoken to the Independent about experiences they feel are relevant to the public discussion now that recent incidents at BES have come to light, and the newspaper will endeavor to give voice to those experiences — and to others Hedley has shared — in a future edition.

The Independent will also provide coverage of a special board meeting to discuss the BES situation, which has been scheduled for Thursday, Oct. 21, at 6 p.m. in the Mount Abe cafeteria.