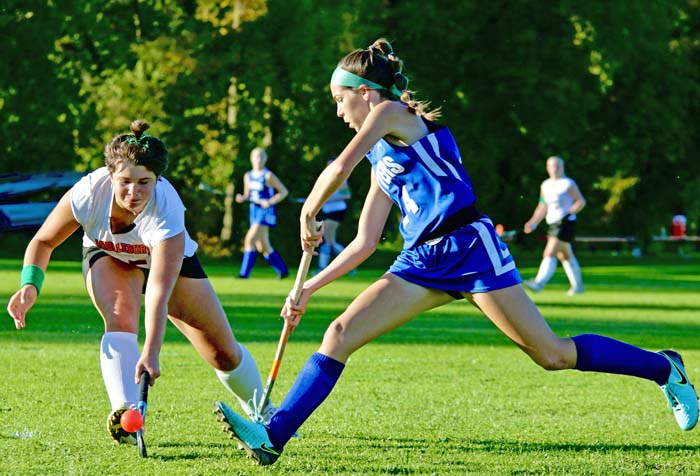 OV FORWARD RYLEIGH Laporte hits full stride down the left side as Tiger defender Lila Cook Yoder tries to slow her down in Thursday’s game at MUHS. LaPorte scored twice in the first half in the Otters’ 5-0 victory. Independent photo/Steve James
By Andy Kirkaldy

That was the last time the programs had squared off before the Otters’ visit to MUHS on Thursday. Unfortunately for the Tigers, this more recent game lacked that kind of suspense.

The Otters scored twice in the first quarter and added another goal in the first minute of the second quarter, junior forward Ryleigh LaPorte’s second of the game, on the way to their 5-0 victory.

That fast start set the tone for the afternoon. 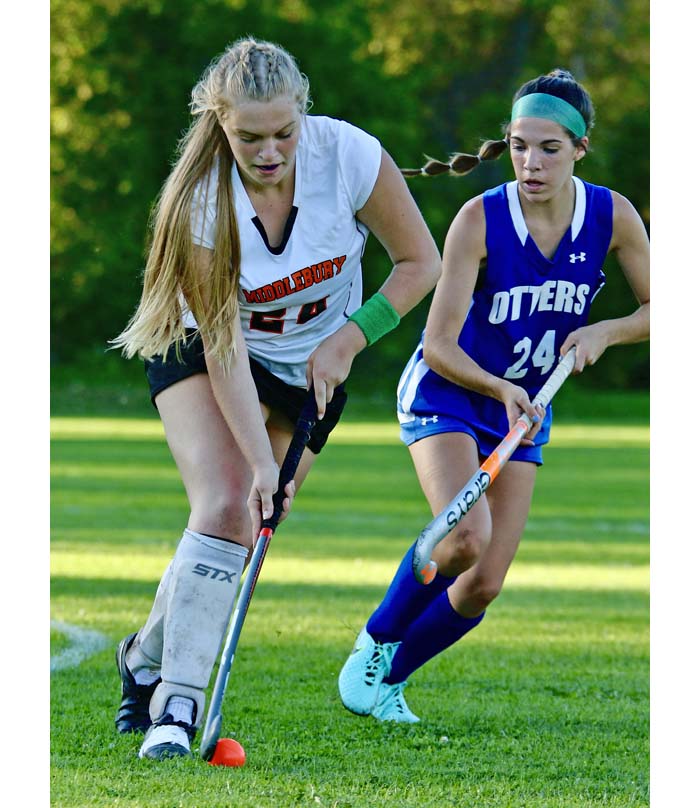 TIGER CENTER BACK Alex Bonavita moves the ball out of the Tigers’ defensive end past OV forward Ryleigh LaPorte. The Otters won, 5-0, to improve to 7-1-1 heading into a Saturday game vs. undefeated Bellows Falls, the defending D-II champion. Independent photo/Steve James

“It’s very important in any game,” said OV Coach Jodie Keith, whose team improved to 7-1-1 heading into a challenging matchup at undefeated Bellows Falls on Saturday. “We always like to score a couple goals and get ourselves settled and then keep pressuring.”

“We have a very quick front line,” Coach Keith said. “They’re very speedy, and our midfielders are the same way.”

“I think that’s fair to say. We were taken off guard a little bit, and then we just didn’t have the momentum behind us to rally back,” Whittemore said.

She also agreed the Otters are fast, but was not sure speed was the decisive factor as much as the Tigers just not displaying the grit they had shown recently while toughness when playing D-I Metro teams.

“We can be quick when we want to be quick. They’ve shown that they can,” said Whittemore, whose team was without ailing middie Kenene Otis, a key cog. “We were letting the team get those 50-50s.”

The trouble started on the Otters’ first shot. LaPorte, a thorn in the Tigers’ side all game, carried down the left side and crossed into the box. The ball deflected to Jackson, near the penalty stripe, and she rapped it inside the right post.

A fruitless Tiger penalty corner interrupted a series of OV chances, a half-dozen of which Tiger goalie Cassie Bettis stopped, including several from point blank. She finished with 21 stops, and defender Hannah Cameron made a defensive save.

“Cassie has been a leader, not only as a captain but as a goalkeeper,” Whittemore said. “She really takes charge.”

But Bettis had no chance on OV’s second goal, which came on a corner with 43 seconds left in the period. A ball served from the right side bounced through and off a knot of players to LaPorte, who banged it home from about six feet out.

Two minutes into the third period LaPorte raced past the Tiger defense and in alone on Bettis and found the lower right corner to make it 3-0. 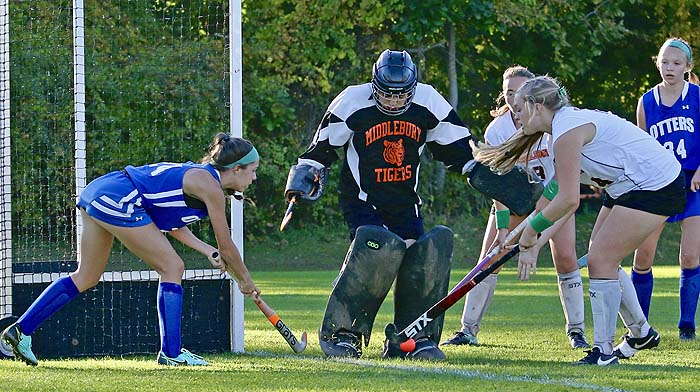 TIGER GOALIE CASSIE Bettis and defender Alexandra Bonavita, right, hold the fort against OV forward Ryleigh LaPorte in the first half of Thursday’s game at MUHS. LaPorte scored twice, while Bettis made 21 saves during the Otters’ 5-0 win. Independent photo/Steve James

The Tigers showed some signs of life in the period, with strong runs from middies Hana Doria, Scarlet Carrara, Erin Mulcahy and Viviana Hammond. But nothing translated into true threats on OV goalie Lily Morgan, who finished with three routine saves.

The Otters reasserted themselves in the third period, earning seven penalty corners in the first eight minutes and scoring on two of them. The first goal came at 8:08, when a ball rolled from across the goal mouth until Alice Keith tapped it in at the right post.

At 6:50 Riley Keith found the cage on an angled shot from the left side after taking a pass from Alice Keith, who relayed the insertion.

The Tigers countered with two corners late in the period, but could not convert. They also had two chances early in the fourth quarter. Carrara slipped a pass through the defense to Talia Cotroneo, but her one-timer rolled wide left. Morgan also kicked away a strong cross from McKenna Raymond. Later in the period the OV defense blocked another Cotroneo bid. 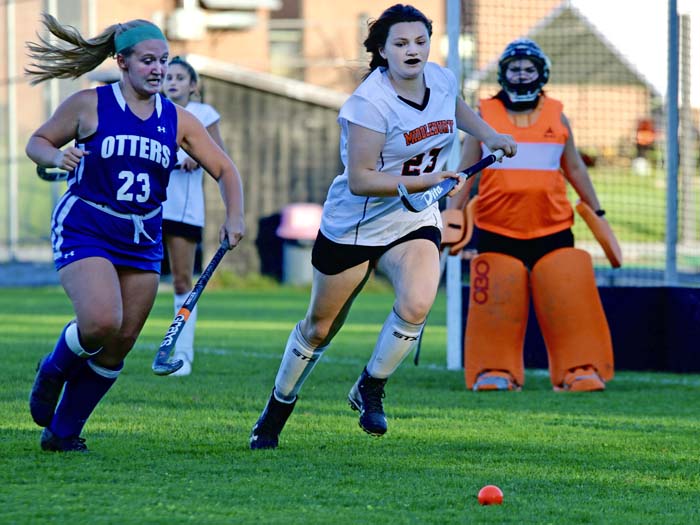 TIGER FORWARD MCKENNA Raymond and OV defender Marissa Connors chase after a loose ball in the Otters’ end during the second half of Thursday’s game in Middlebury. OV won, 5-0. Independent photo/Steve James

Coach Keith attributes her team’s success to conditioning, vital with just four subs, and a constant focus on mastering the sport’s fundamentals.

“We try to focus on the basics, like stick skills, how to stop the ball properly without getting called for a hack, good passes in front of our teammates leading them to the ball, those kinds of things,” Keith said. “It’s just drilling the basics, good stick skills into them. We work on that a lot.”

Whittemore said the Tigers need to remember to play as a unit, as they had in showing well in their recent one-goal losses to Rice and Essex.

“We went back to that individual play, and you can’t win if you don’t play together,” she said.