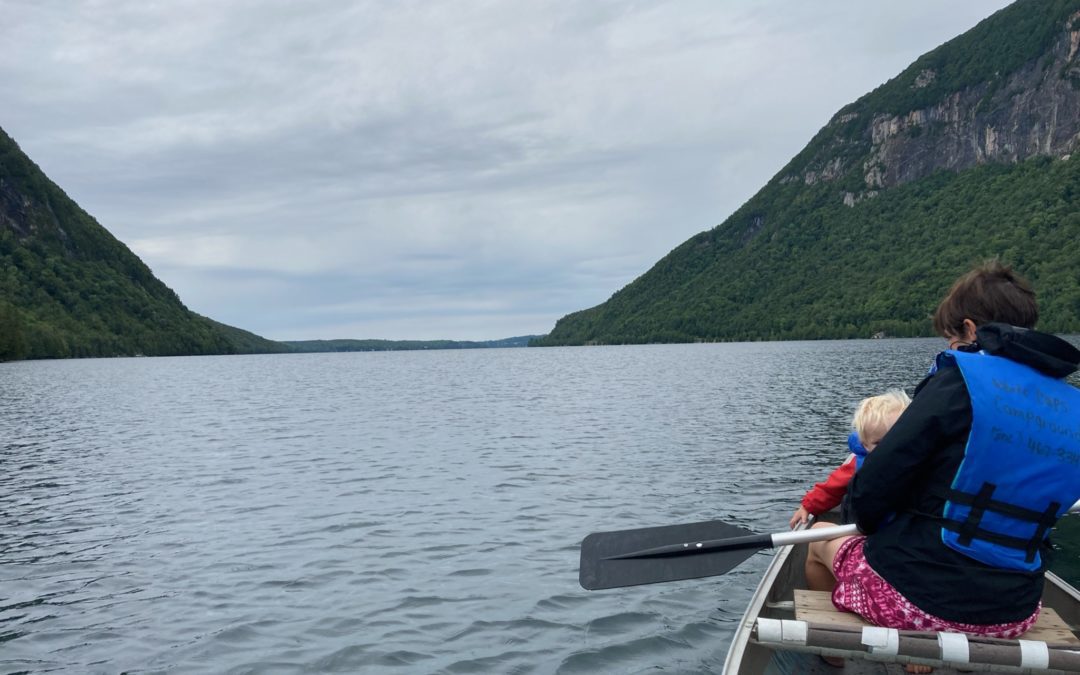 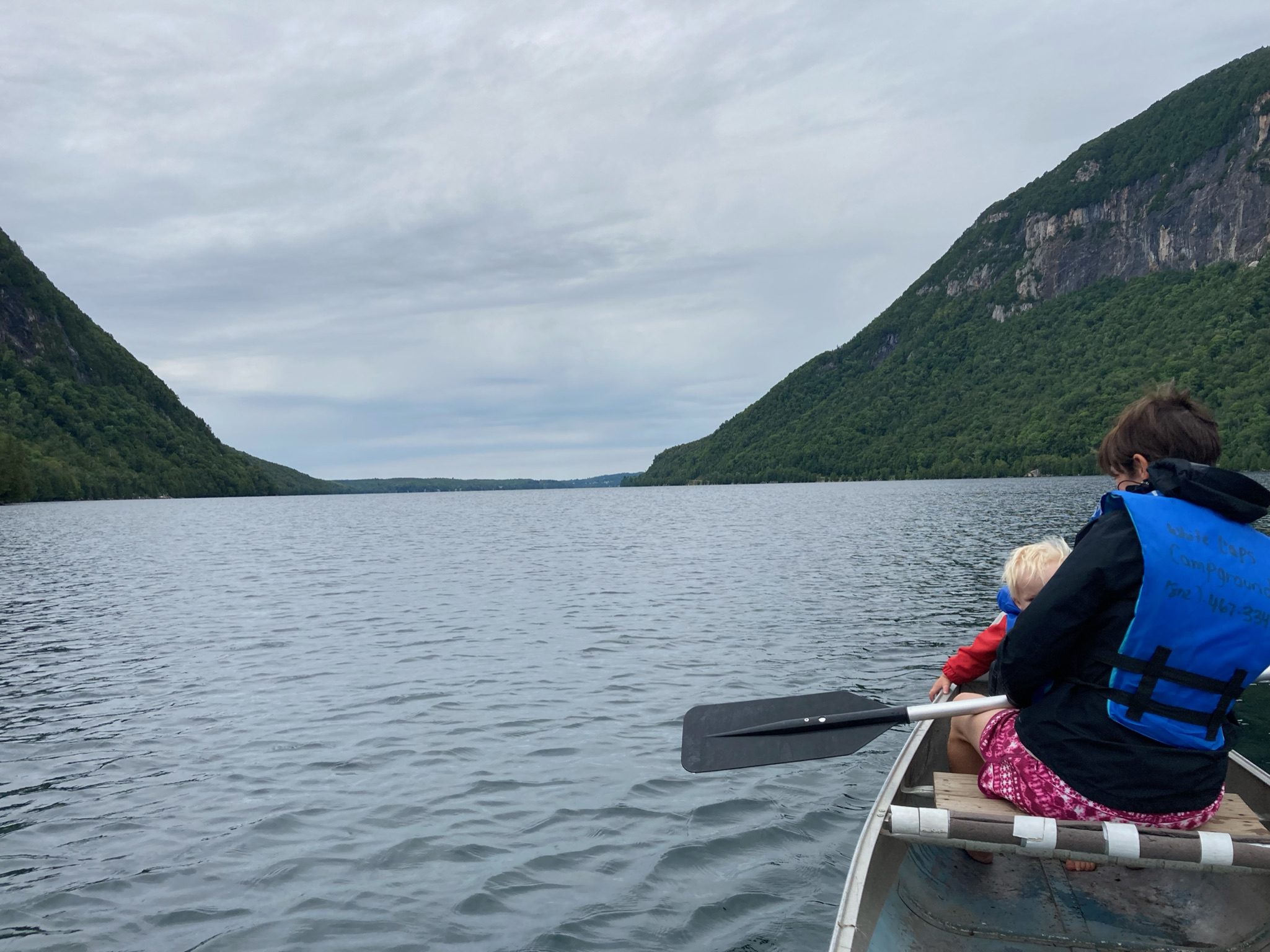 In my most recent column, I began writing about the weekend getaway my husband and I – and our 22-month-old son – took to Lake Willoughby in Vermont’s Northeast Kingdom. This is a continuation of that story.

The weather was unseasonably warm and humid when we arrived at Lake Willoughby, just as it had been for the past week (although I’m not sure what “seasonable” is anymore in this era of climate change). But when we awoke the next morning, we were greeted with a chilly rain that lasted, off and on, for the duration of our stay.

We weren’t deterred. Whenever the rain paused, we set out on hikes or canoe rides around the lake. As fifth-time parents, we’ve learned the rhythm of hiking and canoeing with a 22-month-old: He’s a joyous participant for the first 15 minutes, he screams for the next 15 minutes, and then he falls asleep. So everyone was happy — except for the plumbing at our rental house. The plumbing was definitely not happy.

Everything seemed fine when we arrived at the unassuming little house that had been converted into a rustic hunting lodge on the inside (complete with wood paneling, carved bear and moose figures, and plenty of antlers). It was clean and comfortable. But on our first night there, we noticed that whenever we turned on a faucet or flushed the toilet the pipes seemed to burp. The water would fizz and pop. We assumed that there was some air in the pipes and hoped it would pass.

By our second day at Lake Willoughby, the problem was getting worse. The water continued to fizz and pop, but the intervals when air issued from the pipes instead of water were becoming longer and more frequent. Then warm water started coming from the cold water tap.

My husband went down to the basement and looked at the pump, and it didn’t look good. Concerned that we might lose water all together, we filled up some large pots in the kitchen. Then we sent a text message to the house’s owner. It was a Saturday evening, so our best hope was that perhaps a plumber could be called for the following day.

Minutes later, my husband’s phone buzzed. He looked at the text and said, “Some guy named Tom is coming over.”

Tom was a friend of the rental house’s owner who apparently helped maintain the property. Was this his regular job, or just a favor? We never knew.

Tom arrived in his pickup truck and knocked on our door wearing a headlamp and a face mask. The face mask caught our attention: Although Orleans County was (and still is) experiencing high rates of COVID-19 transmission due to the delta variant, and indoor masking was strongly recommended, Tom was one of the only people we’d seen wearing a mask all weekend.

“Sorry about the mask,” he said as he walked through the door. “I guess we’re all scared again.”

Tom, it turned out, had had COVID earlier in the pandemic. He said he’d lost a lot of weight, and continued to experience symptoms of long COVID, including monthly bouts of “brain fog.” He bemoaned the fact that so many of his neighbors wouldn’t wear masks to help keep each other safe.

Tom was tall and thin, probably in his 60s. Everything about him was in a blue-grey palette: his worn and baggy pants, his sweatshirt, his skin, his hair. He spoke in a quiet, whispery voice.

Tom then proceeded to talk continuously while attempting to fix the plumbing. His words filled the spaces between forays into the basement, trips to his truck, and a journey out to the well.

Like some old-time prophet, Tom lived on top of Mount Hor on a 35-acre plot of land. It seemed he’d grown up in the area, moved away for a time, and then returned. He had two children, now grown: a boy and a girl. The girl was the tough one, who’d once chased her older, bigger brother around while holding a handful of snakes. “He’s in the Marines now,” Tom said of his son, “and he’s not afraid of anything, but I’m pretty sure he’s still afraid of his sister.”

Tom had his kids later in life. His wife was either a doctor or a diplomat — my husband and I heard two different things; maybe she was a diplomatic doctor. In any event, she traveled a lot, so Tom was often the sole parent. “I was never the kind of guy who people would hand a baby to,” he said, “and then suddenly I had to raise these kids.”

He thought the problem with our water had to do with the drought that Orleans County was experiencing. This house, which was originally the farmhouse on a larger plot of land, got its water from a well, and the water level in the well had been dropping dangerously low.

“You’re from here, aren’t you?” he asked — meaning Vermont. When we affirmed this, he launched into a critique of the maintenance calls he gets from out-of-state visitors.

We apologized to Tom for bringing him out so late at night.

“No problem at all. If I’d known what you were dealing with, I’d have brought you some weed. It’s legal here now, you know,” he chuckled.

Tom, in turn, apologized to us for the inconvenience. When I assured him that we understood that things fall apart, he said, “’Things fall apart;’ reminds me of the book by Chinua Achebe.” And then he was gone, out the screen door and into the night.

You may be wondering: Did Tom fix the plumbing issue?

Well, there was some improvement. The water still fizzed and popped a bit, but we were no longer concerned that we’d lose it altogether, and the cold water was cold again.

But the plumbing wasn’t the point anymore; Tom had fixed so much more. When he left, my cheeks ached from smiling, my sides ached from laughing, and I felt a little bit better about people. Because regardless of whether Tom was a great plumber, he was a heck of a storyteller.

When he walked through the door and started talking, he’d invited us into his story. And once you enter into someone’s story, you can’t help but wonder at the marvelous complexity of people, like a mountaintop handyman from a remote northeast corner of Vermont who cares about public health, raised his children well, reads Nigerian novelists, and (maybe) smokes a little weed sometimes.

People, when we get to know them, defy our attempts at categorization.

Driving to and from Lake Willoughby, I’d noticed the variety of signs that people hung on their houses. These ranged from vaguely hostile (“Don’t Tread on Me!” and “Come and Take It” above the silhouette of a rifle) to the dubious and daffy (“Free Raw Milk!” and “Aura Photos”).  I wanted to categorize these houses: Doors I’d knock on, and doors I wouldn’t.

But behind each of those doors is a fellow Vermonter with a story. Maybe the key to living together in peace is to get past the signs and slogans and spend more time listening to each other’s stories. Tom taught me that.