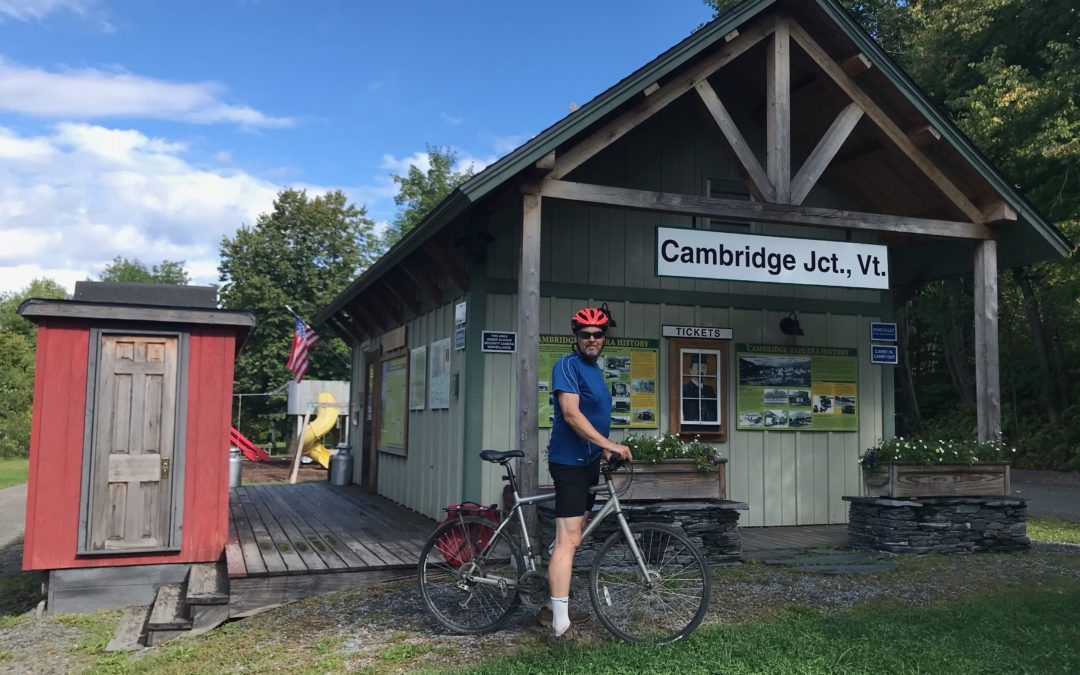 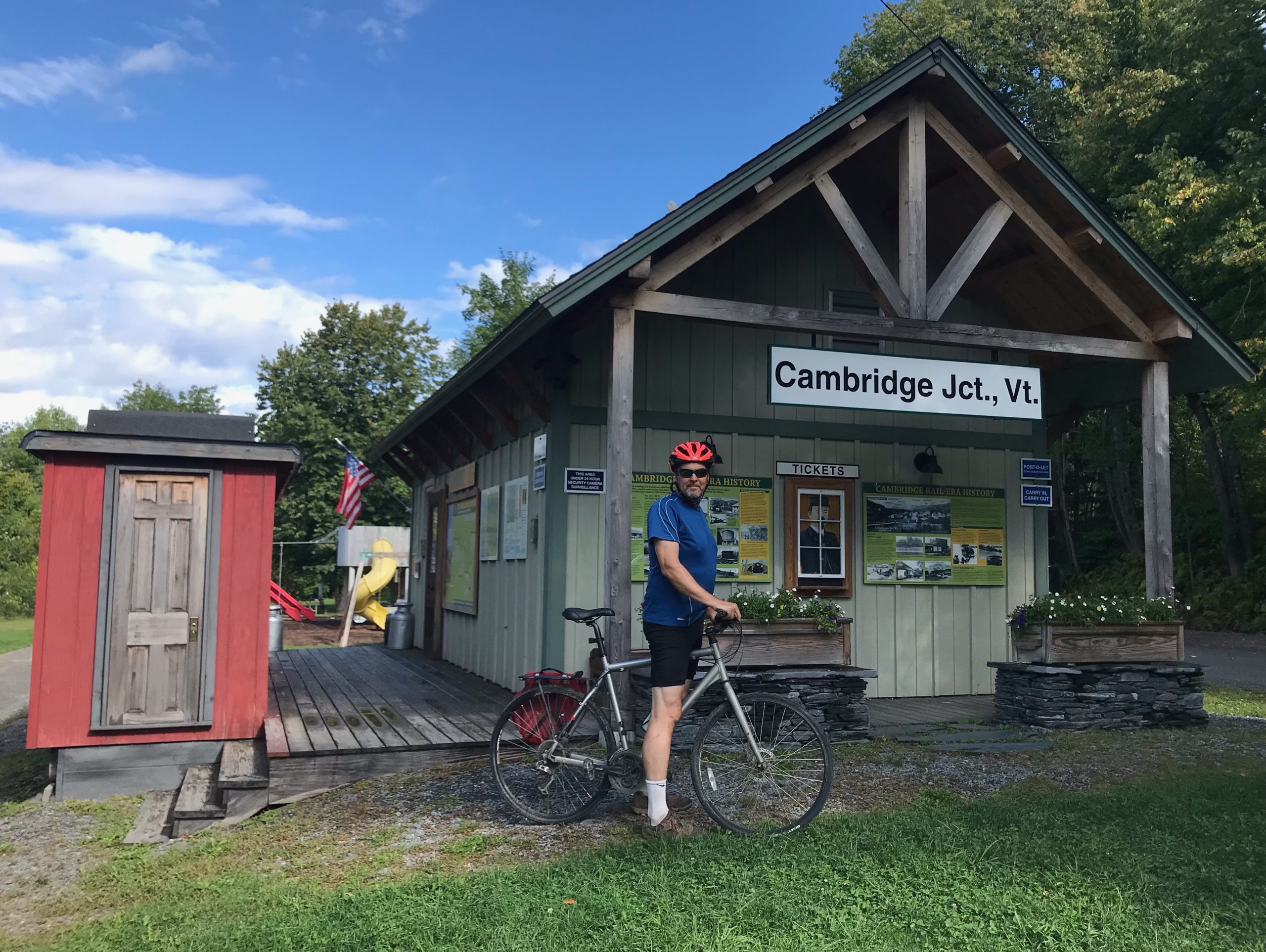 OUR INTREPID COLUMNIST navigates the mostly flat Lamoille Valley Rail Trail, which offers great views and no vehicular traffic. Can we get one of these in Addison County? Photo by Deborah Dickerson

My wife, Deborah, and I had been wanting to bike the Lamoille Valley Rail Trail (LVRT) for some time. We’d driven past the eastern end numerous times on our way along Route 2 through Danville and St. Johnsbury to visit family in Maine. And Deborah’s parents live just off the Lamoille River a short drive from the western portion of the trail. Given that we can rarely grab more than 60 minutes of biking on any given day, however—almost never an entire morning or afternoon—the LVRT has always seemed too far away to justify the driving time and gas consumption for such a short ride.

And yet it was still enticing. Biking nearly anywhere in Vermont is scenic. It can also be harrowing. While our state is noted for beautiful, rural, pastoral, rolling landscapes (and stunning foliage), it is not noted for wide shoulders on the roads. Puttering along the stretches of Route 116 near our house, we are routinely passed by texting drivers, lumber and gravel trucks, and various delivery vehicles, as well as by drivers traveling 10 miles per hour above the speed limit — all with limited visibility over roller coasters and through tight turns while we are forced to peddle the edge of the car lane (remember, the roads have no shoulders).

At the risk of being ridiculed by my more adventurous and hard-core biking friends and readers, I will also confess that my biking tastes have changed somewhat from when I was a college student 40 years ago. I no longer enjoy steep hills — neither the ascent nor (in the case of those hills that wind through tight bends) the descent. In my college days, I did long biking treks through the mountains of New Hampshire and Maine with ascents of a dozen miles or more. More recently (though still several years ago), I biked westbound over the Appalachian Gap, and enjoyed both sides of the ride: the workout coming up past Mad River Glen (despite the burn in my legs) as well as the exhilarating descent down into Starksboro (despite burning through my brakes and feeling no small amount of anxiety entering those tight turns at the bottom of each steep descent).  Those trips are much less appealing to me now, however.

Biking a rail trail, by contrast, is appealing to both my wife and me. The biggest reason is the lack of cars (and trucks, and manure spreaders, and texting or otherwise impaired drivers). Built on an abandoned rail bed, the LVRT wanders through the woods, along rivers, through cornfields, and across golf courses. It sometimes runs parallel to a road, and occasionally even crossing a road, but never actually shares a lane with automobiles. Along much of the trail, the road isn’t visible, and in many places passing trucks aren’t even audible. There are only a modest number of road crossings, and most are over rural gravel roads.

The other advantage of rail trails to folks who no longer like steep hills and tight corners is the contour. The old trains for which the rails were built had a maximum grade; they are never especially steep. (Trains also aren’t very good at tight corners.) So an old railway converted to a multi-use trail guarantees gentle inclines, declines, and corners in addition to freedom from automobile traffic.

So when we found ourselves having to travel to St. Johnsbury to drop off a family member whom we care for, giving us not only a couple days free of care responsibilities but also putting us in the neighborhood of the LVRT, we made our plans. I booked us a night at an inn in Jeffersonville, we threw our biking gear in the car and our bikes on the rack, and we headed up to St. Johnsbury for a 36-hour biking vacation over the long Labor Day weekend.

Following the old railway line, the LVRT has a planned total length of 93 miles from St. Johnsbury to Swanton. At present, only three sections are opened: St. Johnsbury to West Danville, Morrisville to Jeffersonville and the newly opened westernmost section from Sheldon (where it intersects the Missisquoi Valley Rail Trail) to Swanton.  Our original plan was to park in Morrisville, bike the section to Jeffersonville (and maybe some more beyond that), spend the night at the inn, and then bike back to the car the next day. However, the weather forecast for afternoon thunderstorms was listed at 100% starting about the time we could have gotten to Morrisville from St. Johnsbury. So when we reached West Danville and the rain hadn’t yet started (despite the ominous-looking clouds to the east) we seized the opportunity and pulled into the parking lot of Route 2 by Joe’s Pond.

And there we were 30 minutes later and seven miles downhill from West Danville when the darkening skies warned us to turn around and start back up the continuous climb toward the shelter of our car. As it turned out, the trip back up was nothing to be anxious about. The gentle grade of the old rail bed meant we were able to cruise along almost (though not quite) as quickly as if we’d been on flat terrain.

The sky darkened. We peddled. The wind blew. We peddled more. A light rain fell for a few seconds, then stopped. We arrived back at the car. Just about then, as I put the bikes on the rack, the rain started in earnest. By the time I was getting myself seated in the car, the earnest rain turned into a torrential downpour. The promised thunderstorm had begun.

Three hours later, checked into the inn in Jeffersonville, I looked out the window and saw the rain had stopped and the sun was shining again. We got on our bikes and peddled the next section. And before we’d finished a nice pub dinner that night, we were making plans to return and wondering what it would take to get a biking corridor in Addison County.