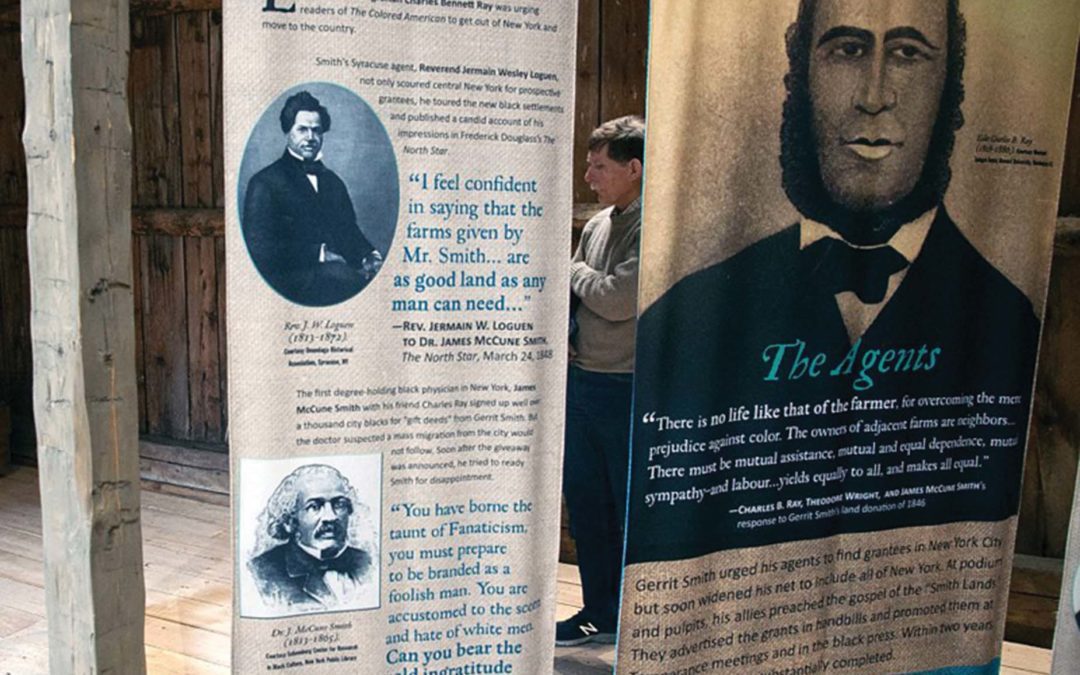 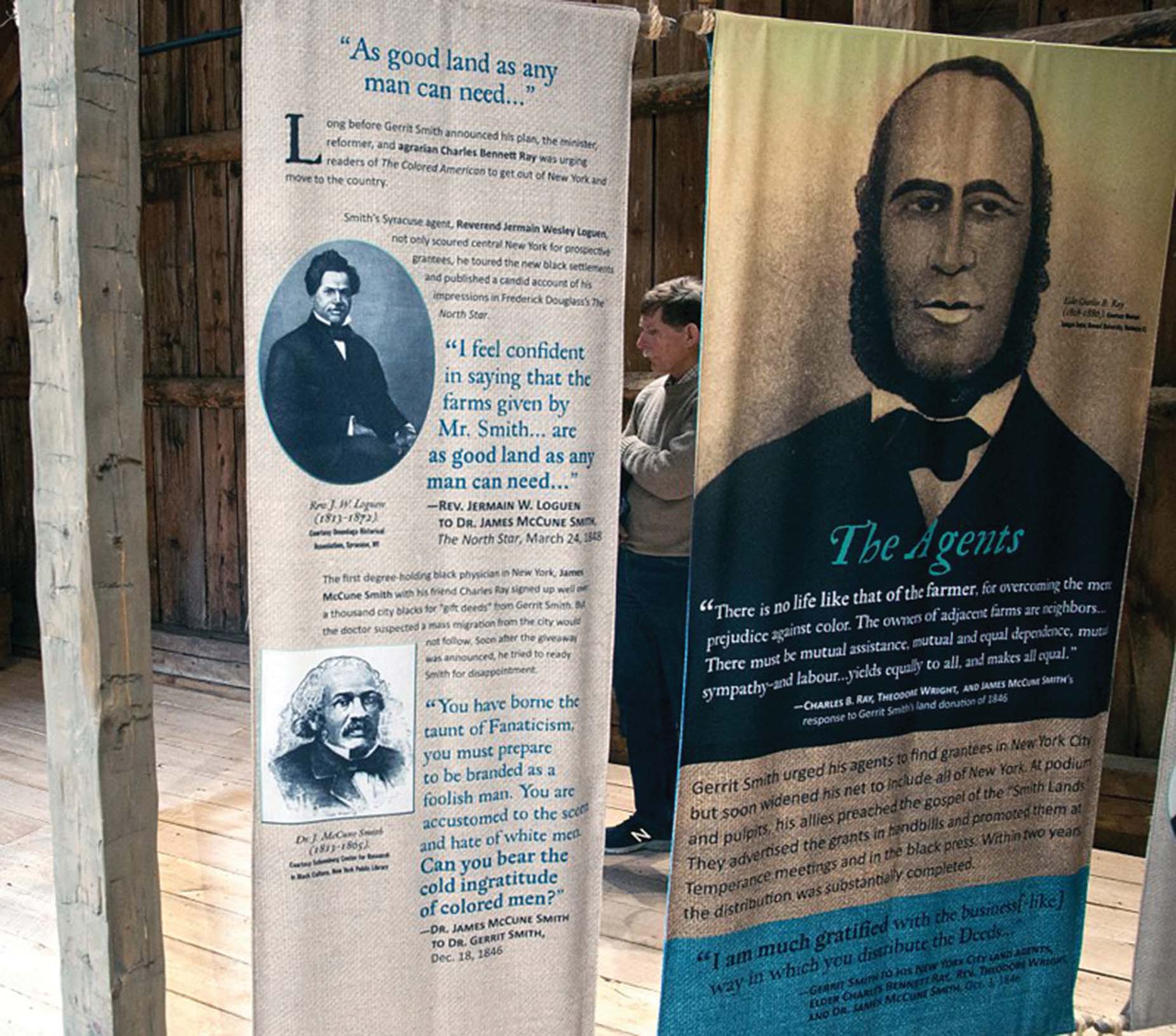 TOWN HALL THEATER’S Jackson Gallery is hosting a new exhibit called “Dreaming of Timbuctoo,” providing a fascinating look at a mid-10th-century land-grant effort in the Adirondacks that sought to give Black New Yorkers the right to vote, in addition to farming opportunities. Photo courtesy John Brown Lives

MIDDLEBURY — Town Hall Theater’s Jackson Galley has for many years showcased works of art that have stirred diverse emotions in those who have seen them.

Beginning this past Sunday, Aug. 22, the gallery is the temporary home to a different kind of exhibit — one that primarily uses words to touch the heart and fill the mind with information about one of the region’s least-known attempts to deliver voting rights to people of color during the 19th century.

It’s called “Dreaming of Timbuctoo,” and it unearths the fascinating story of Black land ownership in New York and Vermont. It will be on display at the Jackson Gallery through October.

In 1821, the New York Assembly denied the vote to Black New Yorkers who couldn’t show they owned $250 worth of real property. It was so severe a restriction that it effectively disenfranchised virtually all Black men in New York. Progressive delegates challenged this law at the state Constitutional Convention in 1846, but white voters again endorsed the restriction.

That’s when opponents of the racist voting law found a way to circumvent it, thanks to the generosity of Gerrit Smith, a well-to-do reformer and philanthropist based in Peterboro of Madison County, N.Y. Smith agreed to give away 120,000 acres, in 40-acre lots, to 3,000 impoverished, Black New Yorkers.

This “gift land” was located in Essex and Franklin counties in the Adirondacks.

“Inspired by the ideology of land reform and the agrarian rhetoric of Black reformers, Gerrit Smith’s vision of a colony of Black homesteaders expressed his expectation that these Adirondack gift lots would be settled and improved to a point where his grantees could meet the property requirement, and gain the right to vote,” reads the exhibit.

Supporters of the Timbuctoo settlement included a who’s who of anti-slavery advocates of the day, including Frederick Douglass, the Rev. Henry Highland Garnet, James McCune Smith, and John Brown.

Alas, Timbuctoo’s architects found it difficult to persuade Black grantees to leave the urban setting to which they had grown accustomed, and transition to agricultural pursuits in a rural environment amid unsympathetic locals, rumors of infertile land, and a lack of start-up capital, according to the exhibit. Fewer than 200 Black New Yorkers took Smith up on the offer.

While Smith’s effort has been labeled by some as a massive failure, folks like independent historian Amy Godine and Martha Swan, founder and executive director of the organization John Brown Lives, disagree. They’re key architects of “Dreaming of Timbuctoo,” sponsored by Middlebury College and a Vermont Humanities grant.

This is the exhibit’s first showing in Vermont.

She saw the “Dreaming of Timbuctoo” exhibit as something that’s topical, thought provoking and historically significant.

“It’s something that can be there for people to interact with, and think about the fact that there are Black residents of Vermont that have been here awhile — and there’s a history to that,” Pontius said.

Indeed, while some of the grantees who migrated to the Adirondacks would return to their urban roots, others resettled in Vermont.

Their stories are told through a series of panels featuring enlargements of historic photographs and documents that shine a light on this relatively un-examined episode in local history, according to Swan. The exhibit is about more than the Gerrit Smith land grants; it has underlying themes of voting rights, land reform and income distribution — which are very much in the news today.

Some of the Timbuctoo advocates made news in Addison County, Pontius noted.

Among them were Douglass, who in the summer of 1843 delivered a series of fiery abolitionist speeches during a tour that included Middlebury and Ferrisburgh.

Famed abolitionist John Brown was said to have regularly traveled from his North Elba, N.Y., home to shop in Vergennes. After having been hanged, Brown’s body would eventually make its way to Vergennes, where his coffin was ferried across Lake Champlain on its way to North Elba.

And Vergennes was where William Carasaw — one of the Smith land grantees — would ultimately settle with his family following his service in the Union Army’s New York 26th Colored Infantry during the Civil War. Godine — writer and curator of  “Dreaming of Timbuctoo” — said Carasaw stood out to her among the settlers for his tenacity and his decision to embrace the agrarian lifestyle as long as he could.

“After he serves in the Army, he becomes extremely sick with heart trouble and maybe rheumatism … and at that point, he has to quit farming, because he can’t keep it up,” Godine said.

He, his wife Eliza (Reed), and their three sons are believed to have moved to Vergennes circa 1880, according to Godine. There, William Carasaw is known to have worked at least two jobs — as a deck hand on a Lake Champlain canal boat that ran the Vergennes-Westport route, and as caretaker of the horse stables at the old Stevens Hotel. He made sure guests’ horses were fed, watered and stabled.

The owner of the canal boat, Lewis Mott, recalled Carasaw as “a quiet, well-behaved man, and I had confidence in his integrity,” Godine said, reading from an historical account, which acknowledges Carasaw’s poor health after military service. “I soon found he could not do any heavy lifting or severe work, and I took pains to give him the lightest work.”

The Vergennes community similarly accepted the Carasaw family, Godine noted. Further evidence of that can be seen through his membership with the Grand Army of the Republic group in Vergennes, a veterans’ association. It was not segregated.

Carasaw died in 1886, whereupon his widow moved to Troy, N.Y. But the couple’s three sons stayed in Vermont — in Burlington, Vergennes and Worcester, respectively. One of the sons, John, was a standout baseball player.

“As we reopen, we’re rethinking the use of our gallery space and the myriad ways it can be used to tell stories,” she said. “I think visual art has been very strong for many years here, but there are so many different ways to tell stories. So we’re thrilled to have this partnership with John Brown Lives.”