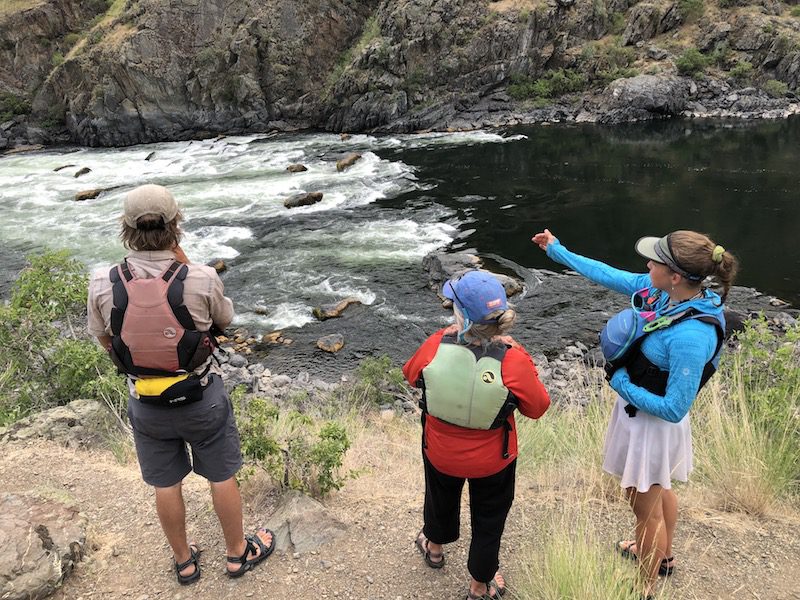 Guides Tyler, Connie and Mahaly discuss and plan a path through one of several class 4 rapids on day 1. Author Matthew Dickerson managed to stay in the boat but was thoroughly drenched by the tail end. Photo by Matthew Dickerson

2nd in a series. Read the first installment here.

It’s the third morning of our four-day float trip with ROW Adventures down the Snake River along the Idaho-Oregon border. My wife Deborah and I sit in the shade of one of the rare clusters of trees near the bottom of Hell’s Canyon. Though at times during our float we’ve felt the impact of the “heat dome” that tortures most of the continent west of the Rockies, the morning air feels delightfully cool. I’m sure the previous night’s intense thunderstorm, which sent us running for shelter, helped bring in some of that cool air.

We finish a hearty breakfast prepared by our guides. Along with freshly cut fruit and hot brewed coffee, it includes real maple syrup on French toast. The maple syrup is from New Hampshire rather than Vermont, but we happily use it anyway. Most of the other guests — all with California roots — choose the Log Cabin corn syrup instead of the maple syrup.

After breakfast, while the guides pack up the rafts and clean camp, the 17 guests discuss which rafts we’d like to be in today. The largest two rafts take at most three passengers in addition to a lot of gear. The guides do almost all the work rowing them from the middle, leaving the passengers sitting comfortably with nothing to do but relax and enjoy the ride. Deborah dubbed these “princess boats” after we found ourselves in one on the first morning. The name stuck. Being in a princess boat didn’t prevent us from getting completely drenched several times the first day as we navigated through class 4 rapids. In one of those bigger rapids on the first day, one of the guides and two of the other guests went for a “swim” — a euphemism for getting tossed out of the boat.

On the second afternoon we claimed a seat in one of the smaller rafts on which six passengers provided additional paddle power under the direction of our guide. There were no more class 4 rapids, but the class 3 did an equally effective job at drenching us. On rare occasions when more than 20 minutes passed between rapids, water fights broke out among the rafts. The regular soakings from cool river water helped us survive the heat.

On this third morning, Deborah — not normally a thrill-seeker — surprises me by suggesting we take one of the tandem inflatable kayaks. (With all the class 4 rapids now behind us, the guides had inflated the kayaks as another option.) “We’ll be going through class 3 rapids,” I remind her, knowing her aversion to physical risks. My comment does not dissuade her. So after slathering on 100 SPF sunscreen and donning our life jackets, we squeeze helmets over our hats and settle into the two-person inflatables.

We don’t have long to prepare before we hit our first class 3. Although neither of us have ever pole-vaulted, Deborah says she feels like a vaulter as she digs her paddle deep into the water and we propel ourselves up and over the top of a towering standing wave. Then we are down into the trough. A wave of water engulfs us, trying to send us for a swim while spinning the kayak sideways. Somehow, we both stay in the kayak. We paddle hard to straight ourselves and hit the next wave straight on. Near the crest, I dig my paddle deep into the water to keep us from spinning. Except for an instant there is no water below me to dig into, and so my big effort results in the top of my paddle flying free and whacking Deborah in the back of the head. (I repeat that maneuver several more times over the day making us both thankful for the helmets.)

The rest of the day goes a lot like that. We get more used to the kayaks, the rapids, and each other as we go. Only once do we get a little nervous when coming upon another class 3 and being warned by the guides to swim hard left if we get tossed. “You really want to avoid the rocks on the right,” they tell us. We make it through without getting tossed.

In the evening we arrive at a beautiful sandy beach where the luggage rafts have already arrived ahead of us and set up camp. The sand is scalding hot — too hot to walk on without sandals — so we huddle under big umbrellas, drink cold beverages, and eat the hors d’oeuvres set up by the guides. “Whatever they pay the guides, it isn’t enough,” my wife remarks. She will say that several times while watching the guides row the boats hard all day, haul luggage, and prepare the meals. (She repeats that especially when they have to deal with taking down the portable outhouse.)

We also cool off by going for a swim in the deep eddy out of the main current. The guides and guests have balancing competitions on upside-down kayaks. Jake, one of the youngest members of the company, beats everybody (including me rather easily and then the defending champion guide who puts up a longer battle). At dinner we are stuffed with ribs and garlic mashed potatoes.

My arms are tired from a long day of paddling with muscles I don’t normally use in that way. Our tent is hot, and there are no trees at this site, but when the sun drops behind the ridgeline a cool breeze begins to stir. Risking an invasion of insects, we unzip both tent doors and let that air pass over us. Eventually I drift off to sleep.