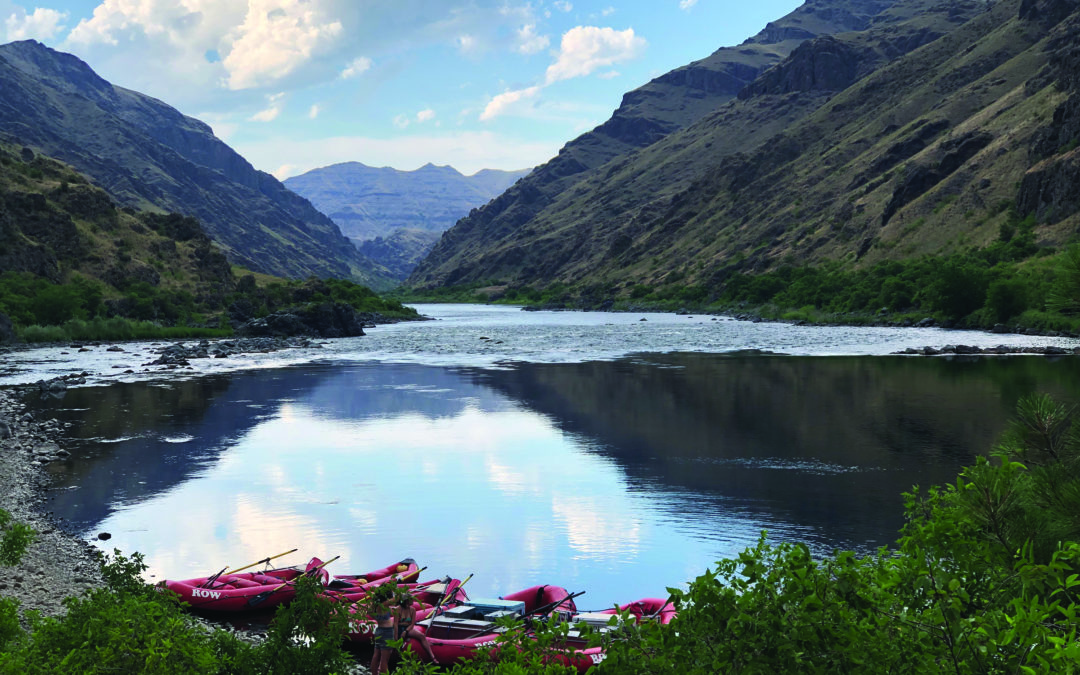 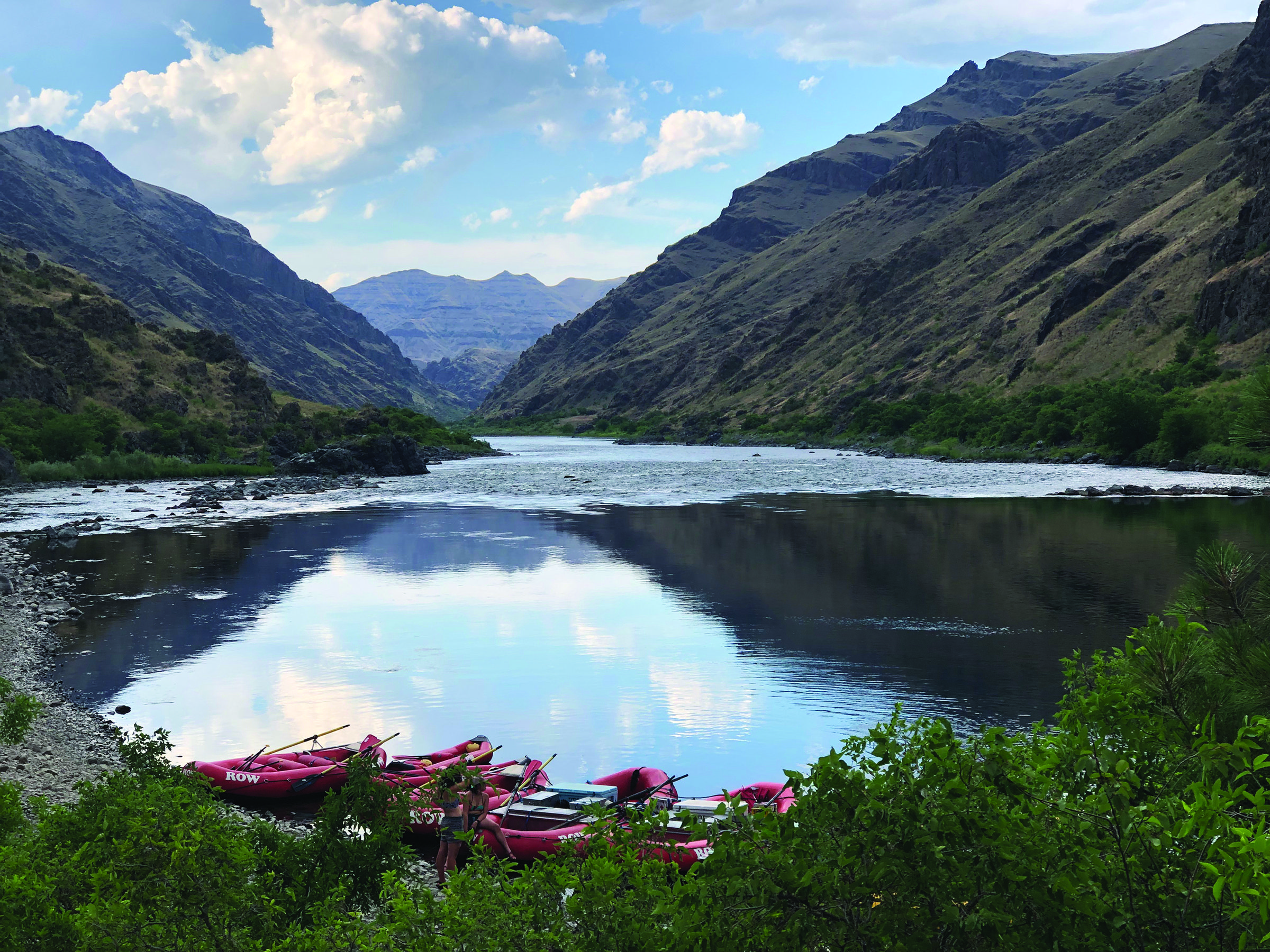 ROW ADVENTURE RAFTS wait to be loaded for the start of Day 3 of our columnist’s float down the Snake River this summer. Photo by Matthew Dickerson

Hell’s Canyon. With 8,000 feet of elevation difference between river level and the highest peaks of the enclosing ridgelines, it’s the deepest river gorge in North America — even deeper (and wider at the brim) than the Grand Canyon. It’s also the terminus of the Salmon River, the longest undammed river in the Lower 48.

Cutting through the heart of this majestic and awe-inspiring canyon is the Snake River. After leaving Wyoming, where it has gathered waters from the mountains of Grand Teton National Park and Bridger-Teton National Forest, the Snake briefly turns northwest and picks up additional flow from the southwest corner of Yellowstone National Park. From there it turns south and then west, crossing southern Idaho before turning north into Hell’s Canyon along the Idaho-Oregon border. As it drops down into this deepening canyon, it passes through three long, narrow, back-to-back-to-back reservoirs: Brownlee, Oxbow, and Hell’s Canyon, which total 95 miles in length. The water also must pass through the three corresponding dams that form those reservoirs and share names with them.

It’s at the bottom of that third dam, Hell’s Canyon Dam, that the famous 80-mile stretch of whitewater rafting begins. That was where my wife Deborah and I put in on a late June morning for a guided four-day, three-night float.

Arriving by bus in the small town of Cambridge for orientation the evening before, we met three other groups on the same trip: two families of four (one from Nevada and one from San Diego, both with a pair of high-school age girls) and a three-generational family group of seven (ages early 60s down to 13.) They all proved to be a lot of fun, and over the next four days we would have a good chance to get to know each other.

It was also a good chance to get to know the guides. The 17 guests divided ourselves each day among four rafts, each with its own guide. Two of the rafts took six “passengers” each. Though steered and powered in part by a guide with oars, the passengers were armed with paddles and required to use them at times — especially in the rapids. Two larger rafts took only two or three passengers each (along with a fair bit of luggage) and were powered almost entirely by a guide with oars. After the first day, we also had a choice of paddling inflatable tandem kayaks.

Lead guide Connie at 67 was older than any of her clients. She’d been guiding for more than three decades. She remained on one of the oar rafts throughout the trip, and nearly always took the lead position (scouting and floating each rapids first). She told great stories, and was a wealth of information on the history and culture of the canyon. Three guides in their twenties — Tyler, Mahaly and Hillary — rotated between the oar and paddle rafts. Two additional helpers, Millie and Scot, went ahead each morning oaring the heavy rafts loaded with remaining gear in order to get our camp set up before we arrived.

And, yes, we had a LOT of gear: food for 10 meals for 23 persons, a lot of drinking water, stoves, cooking supplies, tents, sleeping bags and pads, tables, chairs, all our personal belongings, and even a portable outhouse tent (known as the “groover”). Much of the gear had to be packed into dry bags and strapped onto the rafts. They were impressive sights to see floating downriver.

Over four days, Deborah and I had time in all the boats with all the guides, and also a full day in a tandem kayak. We saw several flocks of bighorn sheep, including right at the shoreline just a few dozen yards away. We saw mountain goats. Our first sighting consisted only of small white specks high up a hillside, but later on we had a chance to see a couple flocks at the river’s edge. We also saw mule deer, bald eagles, osprey, herons, lizards, turkeys and numerous butterflies.

I also saw quite a few fish. A few I saw as I pulled them in with my fly rod. Most I just observed from the shoreline. The river is home to endangered sturgeon that can grow to 300 pounds. (I didn’t see any of those, nor did I attempt to catch one on my fly rod.) It is also a trophy smallmouth bass fishery, and holds rainbow trout (especially around the cold water tributaries). I saw numerous multi-pound carp cruising the shoreline, and huge numbers of congregating suckers I assumed were spawning.

The Snake River also held spawning salmon. It was in part those fish, and the future of the anadromous salmon in the Columbia River Basin, that had brought me there to learn and write. The Snake River — especially in its headwaters up three branches of the Salmon River on the Idaho side — annually hosts several spawning runs of king salmon, sockeye salmon, and steelhead. As recently as the 1950s, the combined spring and summer runs totaled 130,000. That accounted for roughly half of the salmon in the entire Columbia River basin. The indigenous tribes of the Pacific Northwest — including the Nez Perce who occupied the region around the Salmon River — were highly dependent on those salmon for food. Studies estimated between 300 pounds consumed per person per year (minimum) up to over 550 pounds.

The whole ecosystem was also dependent on those fish. Millions of pounds of nutrients brought inland from the ocean each year not only fed creatures like bears and eagles (in addition to the human dependence on fish), but those nutrients eventually get spread across the soil feeding plants.

And it was an impressive run for other reasons, too. Salmon completing a spawn up the Snake River into the Salmon River traveled as far as 900 miles and climbed to 6,000 feet in elevation to lay their eggs and complete their reproductive cycle. There is no other water in the world where salmon have been found to spawn at such a high elevation (higher than the tallest peak in Vermont!). And one would have to go to Alaska or British Columbia to find salmon traveling any longer distance upriver.

I thought about this impressive migration several times as we drifted down the same river those salmon had to swim up. Though I didn’t think about it too much when we were plunging and bobbing through class 3 and class 4 rapids. Then I was mostly thinking about not getting dumped into the river. And, yes, some of us did end up taking an unintentional swim. But you’ll need to wait for my next column to read more.