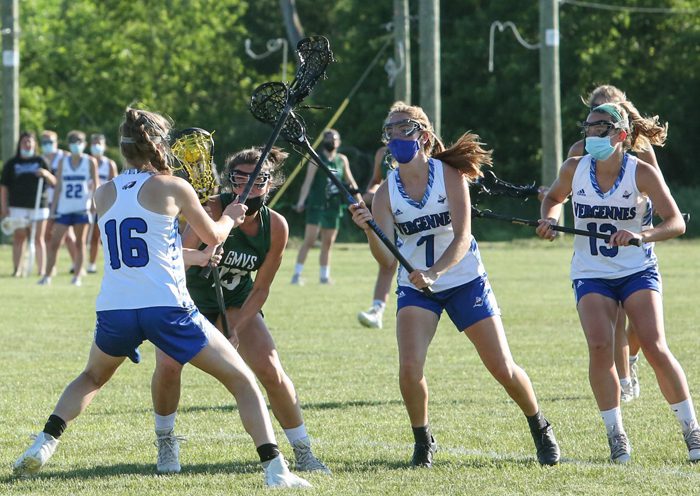 The Commodores show some defense Wednesday as they surround a hapless Gumby. Photo by Buzz Kuhns

VERGENNES — No. 3 seed Green Mountain Valley girls’ lacrosse took charge late in the first half and held on for a 13-10 victory over host No. 2 Vergennes-Mount Abraham on Wednesday, ending the Commodores’ hopes to repeat as Division II champions.

The Commodores finished the season at 13-3, with two losses to GMVS, which improved to 10-2 and advanced to Saturday’s final vs. No. 4 St. Johnsbury, an upset winner at the same time over top-seeded Hartford.

On Wednesday, the Commodores led, 5-2, with 4:19 to go in the first half, but the Gumbies suddenly began dominating draw controls and used that possession to spark a five-goal surge that produced a 7-5 lead. Molly Queally scored three of the GMVS goals in that run, which spanned the first and second halves.

Commodore Sydney Weber scored one of her team-high three goals to slice the lead to 7-6, but that was as close as the Commodores would come as Gumbies Erika Weibe (six goals, two assists) and Queally (five goals, one assist) proved difficult for VUHS/Mount Abe to contain.

Norah Price and Kelly Gebhardt tacked on a goal apiece for GMVS, and Gumby goalie Molly Quinlan (11 saves) was a factor, stopping more than half the shots she saw.

Kelley also praised her team’s effort and play vs. GMVS.

“Everyone played their hearts out and stayed positive throughout the game,” she said.