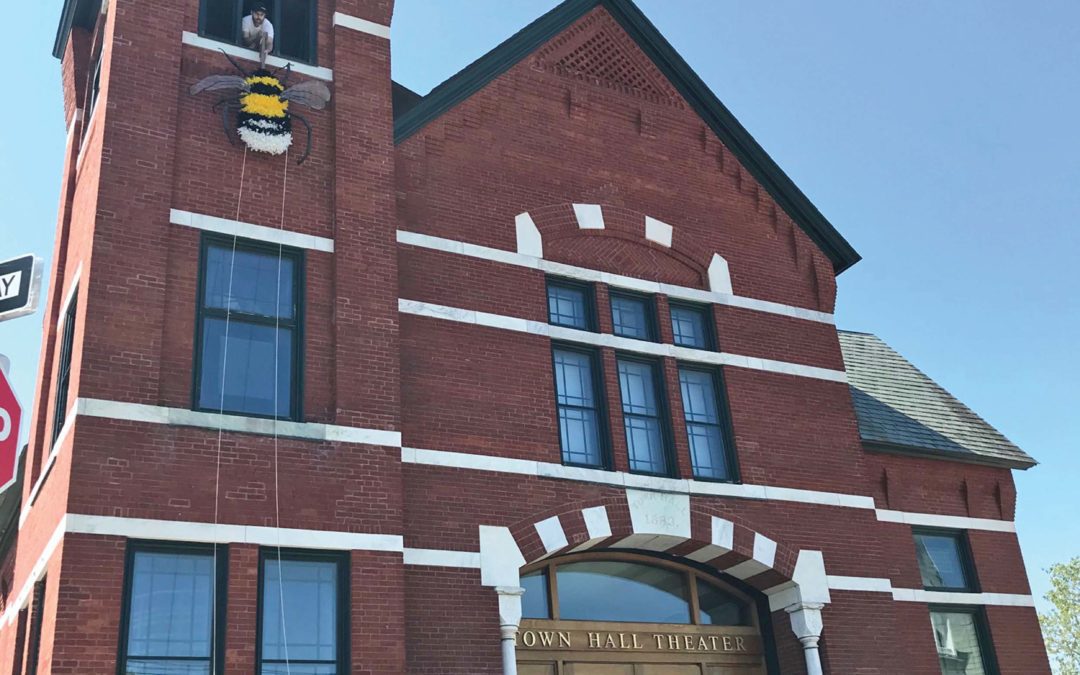 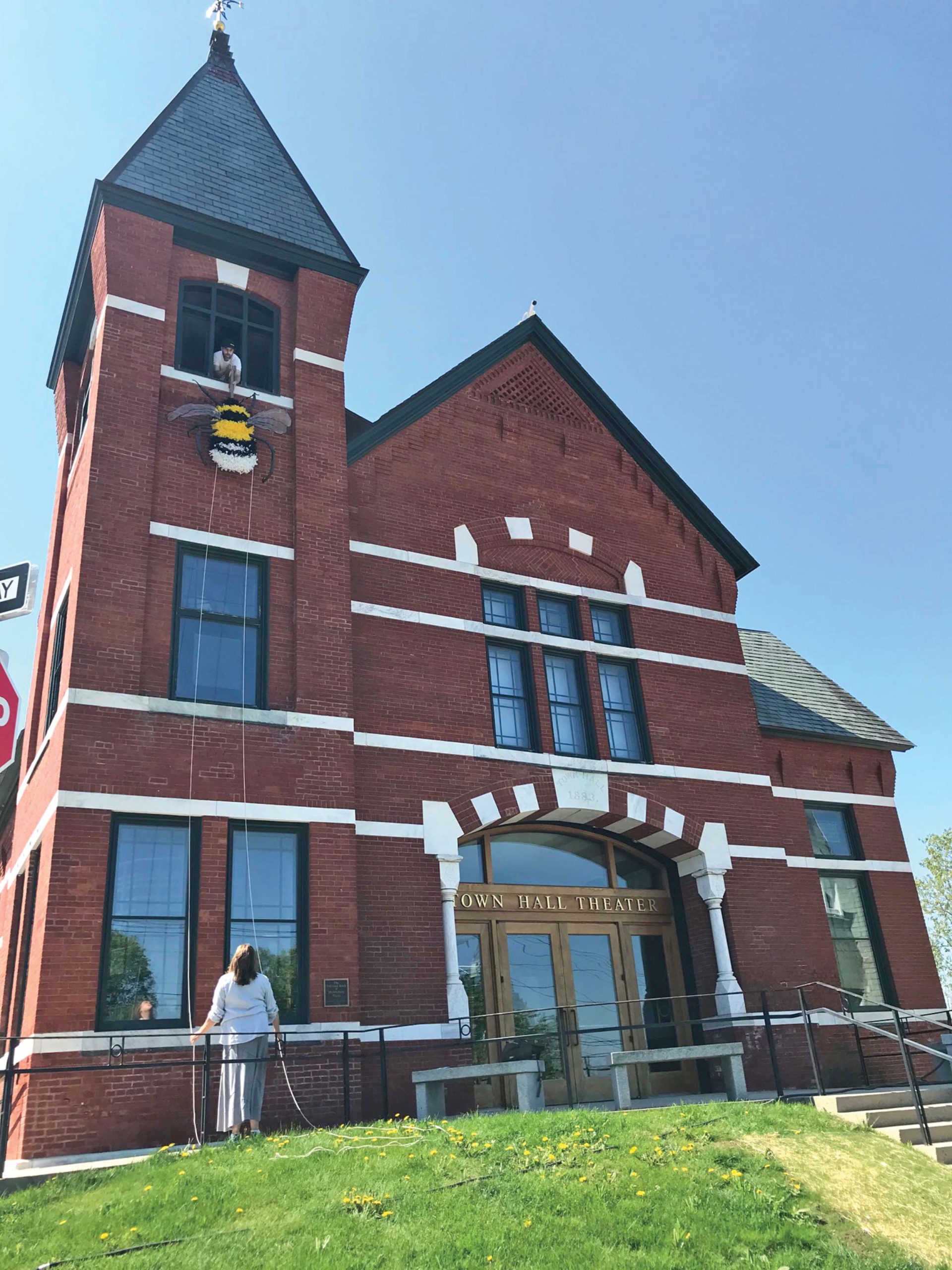 MIDDLEBURY’S TOWN HALL Theater is marking its 10th year of offering educational programming, and this year’s offerings are creating quite the buzz ... in part by raising a “bee” on the building’s bell tower.

MIDDLEBURY — Town Hall Theater leaders want their patrons to experience the two “Es” when they come to a show at the performing arts hub in downtown Middlebury.

The first “E” of course stands for enjoyment.

But the second “E” might some as a surprise to some.

The THT is marking its 10th year of delivering educational programming to children and adults of all ages. And those who partake this year will learn their A, Bee, Cs, as evidenced by the colorful bumblebee that was hoisted onto the theater’s façade last week.

Educational entertainment at the THT has come a long way since it debuted a decade ago under Lindsay Pontius, who continues to run that part of the show. She and THT Executive Director Lisa Mitchell recently took some time to talk about the current “bee” in the THT’s bonnet, and shared their thoughts about the past and future of the theater’s efforts to enlighten as well as entertain.

“Doug (Anderson) had this design of wanting to offer tap classes, and any kind of performing arts classes for mostly kids, and some for adults,” Pontius recalled.

She immediately took to the job, and expanded upon Anderson’s great idea by networking with area schools. She had prior experience introducing school children to the arts and other enrichment programs.

Pontius teamed up with local school officials on several arts/drama programs, including the very popular “Shakespeare: It’s Elementary.” The first year of that program, in 2012, culminated in 106 Middlebury, Shoreham and Leicester students — all age 12 or younger — delivering a performance of Shakespeare’s “Hamlet” on the THT stage.

“Thousands of school children have now been involved with our (educational programs),” Pontius noted. “Up until COVID, we were serving around 2,000 a year.”

“It was very welcoming for them to be able to walk across the street, in the case of Mary Hogan Elementary, and see a world-class matinee,” Pontius said.

She teamed up with Craig Maravich, Visiting Professor of Theater at Middlebury College, to offer “Courageous Stage,” a program that has introduced the theater arts to youth in classrooms across multiple Vermont school districts, while providing professional development training for educators and artists.

Along with being fun and educational, “Shakespeare: It’s Elementary” and Courageous Stage have been useful in uniting children in the seven Addison Central School District towns of Bridport, Cornwall, Middlebury, Ripton, Salisbury, Shoreham and Weybridge, according to Pontius.

“It’s not just sports,” she said, of the typical way students from the seven towns meet prior to middle school.

Other popular programming for children has included:

•  “Rock-It Science,” a five-day immersion into the world of a professional musician — in this case, Clint Bierman of the band The Grift. For ages 12-18.

•  A kid-friendly (8-12 years old) study and performance of “Midd-Summer Night’s Dream,” with an emphasis on creating larger-than-life insects, flowers and acorn cups as part of the Shakespeare play.

•  “The integrated Singer,” solo song exploration for ages 11 and up.

•  A partnership with the Weston Playhouse to bring “Seussical” to the Swift House Inn on Saturday, July 31.

Arts programming has helped children familiarize themselves with THT and its offerings.

“We can see it when they come to prom here, the respect they have for the building and a sense of ownership, which I think is really cool,” Pontius said.

Unfortunately, the COVID-19 pandemic placed THT’s educational arm in somewhat of a sling. But with cases on the decline and vaccinations on the rise, Pontius believes programming can come back stronger than ever.

“What we really want to do is open our borders more, and create ways to bring people in more,” she said. “We’re thinking about themes — like the ‘bee’ theme — to reach people who may not necessarily come to THT. There might be lectures, not just concerts and musicals. There will be all sorts of programming that will appeal to different groups of people.”

“The goal is to have people walk away and think, ‘That was a lot of fun,’ but they also learned something in the process,” Mitchell said. “That’s a methodology we want to carry forward across a variety of topics during the weeks to come.”

For example, Mitchell and her colleagues want to bring exhibits to THT that will also have historical and educational applications. They anticipate organizations like Rokeby Museum and Middlebury College can also play roles in these ventures.

“We’re looking at bringing in lectures, talks and other interactive experiences that can engage people across all ages,” Mitchell said.

Future programming will also center on the THT itself. Prior to its renaissance as a performing arts center in 2008, the historic 1884 structure served as a town hall, town offices, movie theater, restaurant and Knights of Columbus headquarters. Pontius is researching the building’s stories past for a creative presentation.

“They all are owning a piece (of the play),” she said, “and you create this beautiful whole.”

She credited Pontius and her colleagues with instilling confidence in the children, from learning lines to staging fight scenes.