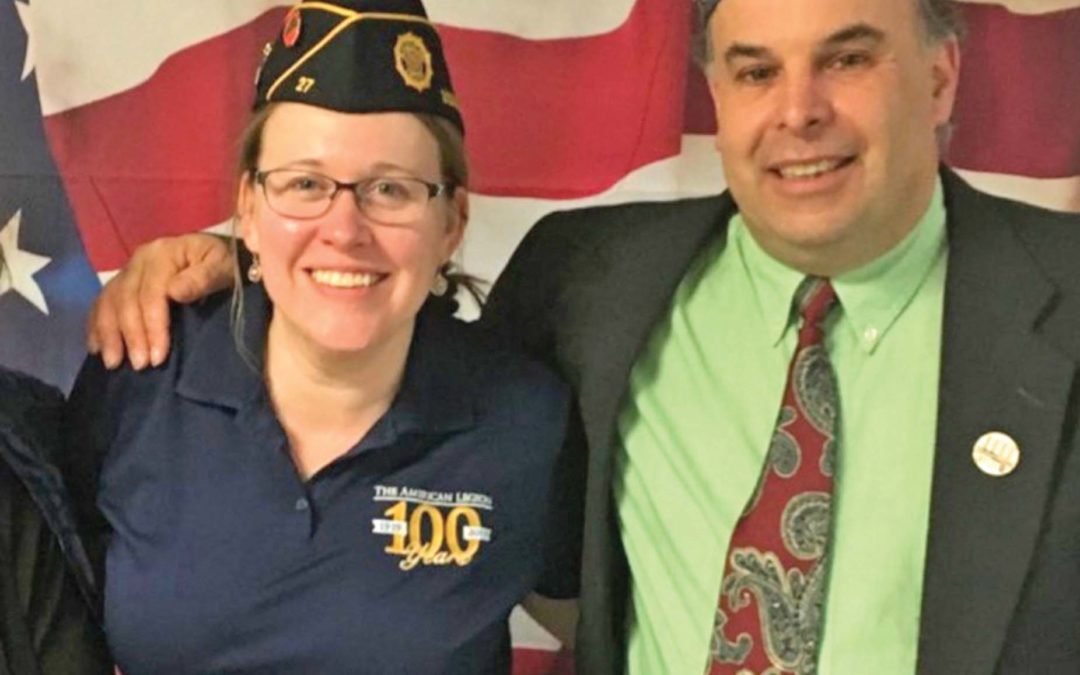 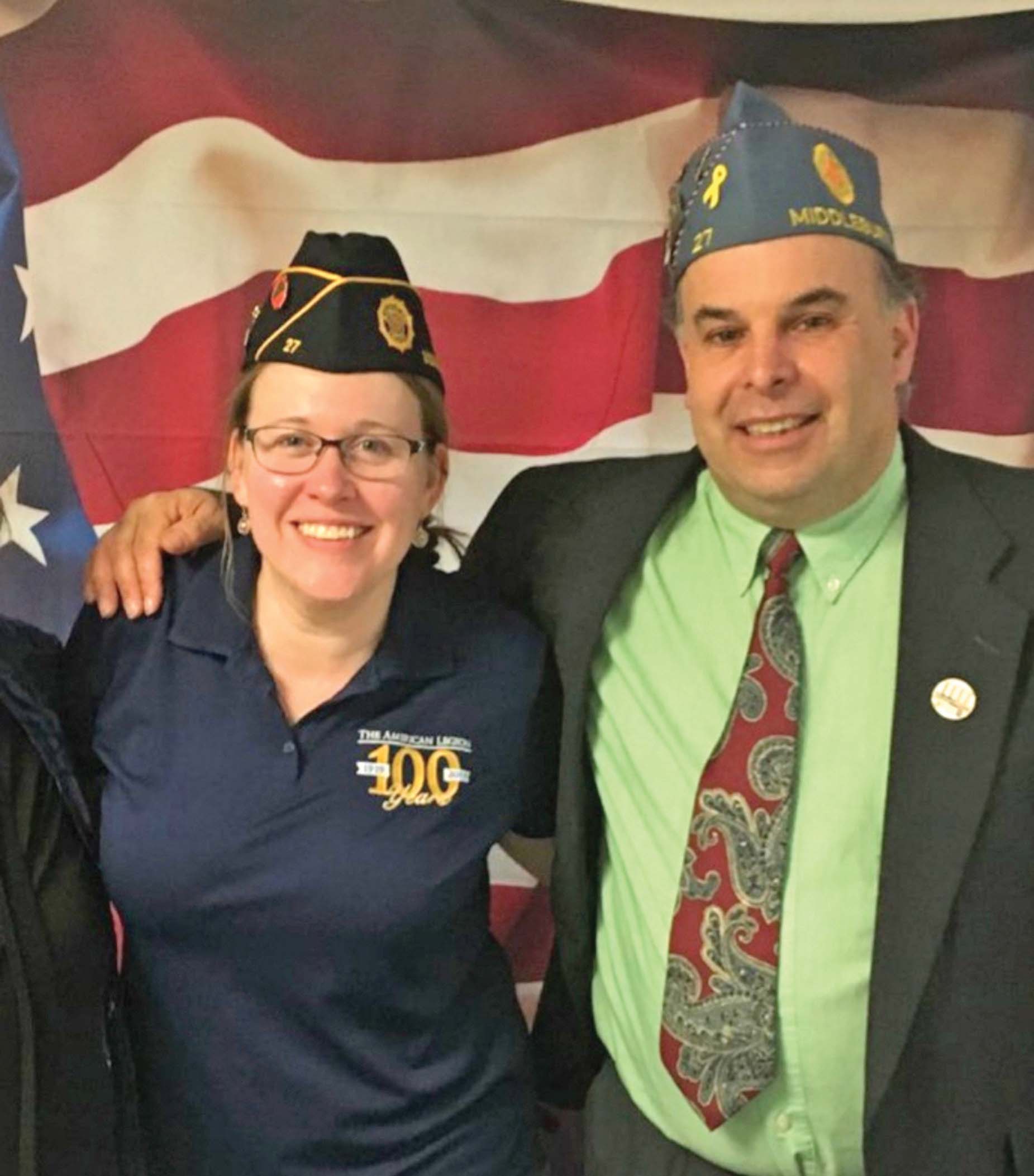 LAURA FLINT, COMMANDER of American Legion Post 27 in Middlebury, and Dave Gipson, squadron commander of the Middlebury Sons of the American Legion, pose for a photo at the annual Legion birthday dinner in March 2019. The Legion was unable to have the event in 2020 because the COVID-19 pandemic was just setting in.

ADDISON COUNTY — While Memorial Day parades are being cancelled out of an abundance of precaution, the county’s three American Legion posts are steadily regrouping and reopening as state and federal authorities continue to lift COVID-related restrictions.

Interviews with officials at Bristol Post 19, Middlebury Post 27 and Vergennes Post 14 show that monthly meetings for members are resuming and hall rental opportunities are imminent. But over the past year, the American Legions’ pattern of incredible generosity has been constant — in spite of the pandemic’s brutal effects on fundraising and other revenue streams.

“We’re getting back to normal,” Post 19 Adjutant Alan Smith said on Wednesday.

The Bristol Legion’s social club has been open to members for a while, adhering to capacity limits prescribed by the Vermont Department of Health and U.S. Centers for Disease Control. Last Sunday was the first day it was fully open, according to Smith. But use of the Post 19 hall has been limited due to COVID; the Red Cross has been holding monthly blood drawings there, but the Bone Builders program won’t resume activities in the hall until June.

As at other American Legion posts, COVID-19 has reduced the Bristol Post 19’s capacity to generate income, so its support of local causes has temporarily ebbed, officials conceded. But while hall-rental revenue is down, Post 19 has used chicken barbecue takeout dinners and bar proceeds to assist charities.

Smith looks forward to the near future — possibly July 4 — when Gov. Phil Scott could further lift restrictions on gatherings, travel and commerce. In the meantime, people should do what they can to keep COVID cases down, Smith said.

“I hope everybody realizes that some people aren’t going to wear masks, and some are,” he said, “but I’d at least like to see everyone carry one with them.”

Vergennes Post 14 resumed its monthly membership meetings in April. Its headquarters at 100 Armory Lane has been open at 50% capacity since late winter, according to Commander Ralph Wenzel.

Due to COVID, Post 14 has pretty much kept events small, low-key, and limited to members. Wenzel hopes to be able to offer up the Vergennes Legion hall for private/community events beginning this July. He’s already been fielding calls from people seeking to rent the space for wedding receptions, parties and ceremonies.

“Once we get more events, we’ll get more cash flow,” Wenzel said. And that will restore Post 14’s ability to support veterans’ causes and community charities at pre-pandemic levels.

“We’ve had to cut back on some donations,” he said. “It’s hard to make donations and take care of the veterans, first.”

Like Smith, Wenzel hopes Gov. Scott will soon announce a major rollback of pandemic restrictions. He said the current guidelines change frequently and it can be hard to keep track of what’s allowed and what isn’t.

“There will be less confusion if he lifts the restrictions,” he said.

Laura Flint is commander of Middlebury Post 27, which has tread very carefully during the 14-month pandemic. Post 27 was set to convene its first monthly in-person members meeting in more than a year on Monday, May 24.

“We’ve (communicated) with a lot of emails and a lot of phone calls,” Flint said on Wednesday.

The Middlebury Legion has adhered to state and federal pandemic-related restrictions governing gatherings and club use. It hasn’t hosted a major event at its spacious hall off Boardman Street since the pandemic hit in March of 2020. Right now, the hall is being used to save lives — through COVID vaccinations clinics.

“We’ve literally given the hall to Porter (Medical Center) and the (Department of Health) since January,” Flint said.

Those vaccination clinics are expected to last through June 18, according to Flint. With the clinics done, Post 27 officials will be able to evaluate rental requests for the hall and resume using it more actively for bingo games — which generate around 50% of the revenue for the Legion’s vital philanthropy, Flint noted. She said bingo went on hiatus last November and will resume June 23.

Not being able to host events has been a financial blow to Post 27 this past year. Hall rentals, coupled with related food and drink services, account for about 20% of the Legion’s annual budget, according to Flint.

With bingo and the hall sidelined for so long, you’d think Post 27 would be hard pressed to give out much aid this year.

“We’re giving out more than ever,” Flint said.

Well, Post 27 is able to operate frugally, thanks to a great network of volunteers who possess a lot of skills. Case in point: Members pitched in to perform a lot of deferred maintenance on the Post 27 building during its lengthy shutdown. This included renovations to the club room and installation of a digital bingo system. Post 27 received a $24,437 federal grant to do the work, and volunteers made the money go a lot farther.

Also, Post 27 has long-since paid for its building, so there’s no mortgage. And the group’s leaders have been great stewards of the post’s investments, meaning charitable giving can continue even during this tough financial year.