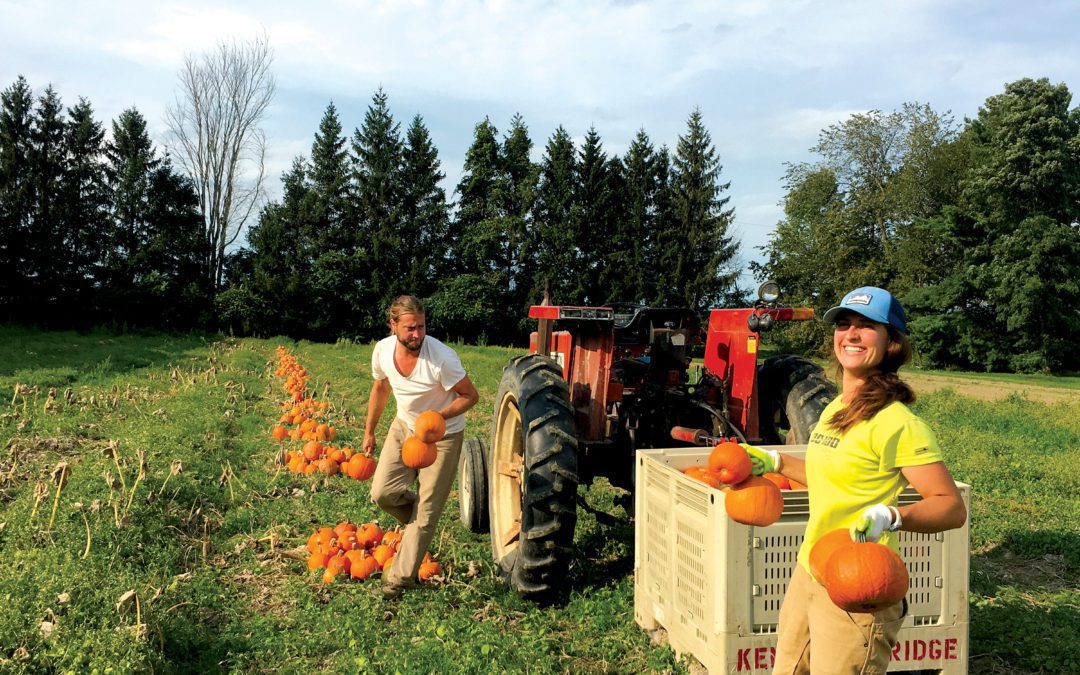 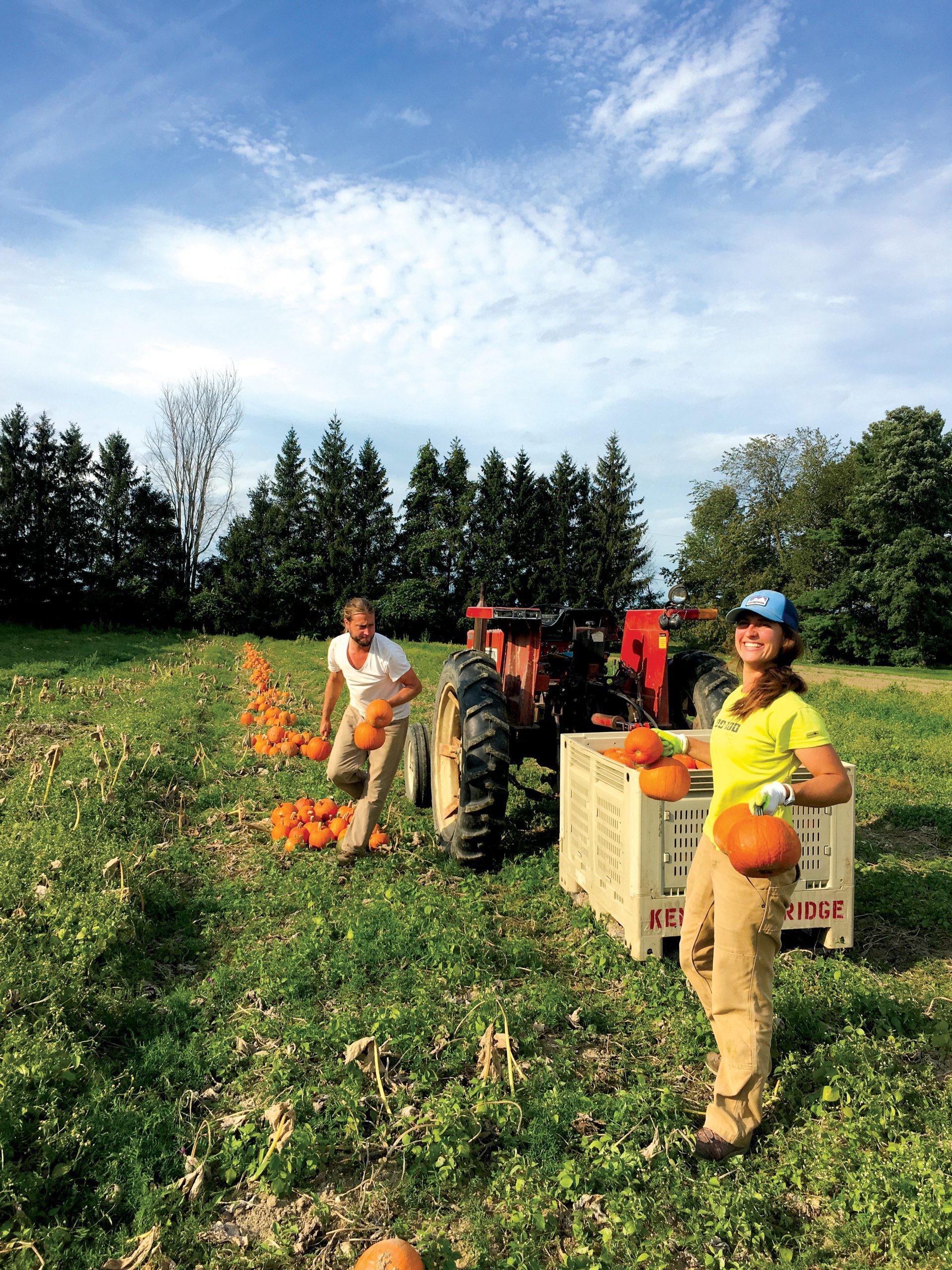 PAULINE STEVENS AND long-time employee Parker Goepel harvest pumpkins from a field at Golden Russet Farm that has been over-seeded with vetch. Once the harvest is complete, the field is covered with vetch and ready for winter.

Agriculture is a naturally extractive process. Cover cropping is one way to replace what we take out.
— Will Stevens

“Regenerative agriculture” may be the latest term to describe a system of sustainable farming that has become popular with the environmentally conscious consumer, but for some farmers, it’s simply the most obvious path.

Will and Judy Stevens established Golden Russet Farm on a rich, loamy plot of land in Shoreham in the fall of 1984. They went straight to work designing holistic systems that would not only yield productive vegetables, but also support the health and vibrancy of their soil for the long haul. The farm obtained organic certification in 1987, which, among other things, mandates specific metrics for organic matter in soil to help determine the amount of oxygen, water and nutrients the soil can hold.

“One of the things that comes with organic certification is a focus on soil health and cover cropping, so those are practices we’ve been committed to from the very beginning,” Will explained. Cover crops like winter rye, wheat and oats are hardy enough to grow through most of the winter, helping not only putting nutrients into the soil, but preventing runoff too.

“But you have to be paying attention,” Will said, “because the window can be pretty short and you have to be ready to move on your plan for the next season.”

Set up is everything, he said. The main goal is to obtain a closed-loop nutrient management system, focused on reducing the outflow of nutrients by limiting the time the land sits unplanted.

Following their careful plans, the Stevens cut and roll winter crops into the soil in the spring as they prepare for new seeding. Within a couple of weeks of this first cutting, the cover crop plants rot in place and are harrowed into the field, adding to the nutrient count that will soon be taken up by new spring plants. The process leaves the fields without something actively growing for only about 3-4 weeks between the time of cutting the cover crop and reseeding, a much narrower window than conventional farming, when a field may be left empty from fall through spring and heavy tilling and fertilizing may be needed before the soil is primed for planting again.

“Agriculture is a naturally extractive process,” Will explained. “Cover cropping is one way to replace what we take out. In a way, we see our task not as building up the soil, but rather reducing the loss that comes with extracting the products we’re growing on the land.”

The Stevens choose cover crops that are most capable of turning into sod and will work best to interrupt weed and pest cycles known to the vegetables they are cultivating. Cover crops work to reduce weeds that thrive in disturbed soil as well as provide much needed “breaks” for land so it’s not in a continuously cultivated cycle.

Their practice is to rotate planted areas with crops that can successfully grow in each of their unique zones. Cover crops may be planted for just the winter, or may be allowed to grow throughout the year in each zone, to allow the soil to be replenished and ready for the next season.

And it is not just the cover crop that add organic matter to the soil. When Golden Russet harvests a crop, it extracts just the food portion of the plants and leaves the stalks and cullage in the field where they were grown. This organic matter is worked back into the field later in the season, thereby feeding many of the nutrients back into the soil so they can be easily reabsorbed by new plants.

“Put simply, we pull the protein and leave the carbon,” Will said.

They also look for plant pairings that can overlap and co-exist simultaneously so as to reduce the transition periods in a field. One successful example of this is with winter squash and hairy vetch (a nitrogen rich cover crop in the legume family). They plant the hairy vetch in with the winter squash around July, just before the squash plants really begin to vine. The vetch competes successfully enough through the season, not impeding the vine or fruit development of the squash. Then after the squash harvest, they leave the vines in place to decompose and already have a successfully growing winter cover crop in place.

“Nitrogen source crops like hairy vetch and clover are like magic to me,” Will said. “They have root nodules that naturally pull nitrogen out of the air and into the plant, so you have a free source of nitrogen without needing any additional inputs like compost or manure.”

It is in symbiotic pairings like this that make regenerative agriculture practices superior; the nutrients loop seamlessly, soil remains undisturbed and yields are high in successive production cycles.

“To be honest I consider myself more of an artist than a scientist,” Will said. “As organic producers, our target is really about balancing the whole system than it is about focusing on particular numbers, yields or practices.”

Organic certification standards require Golden Russet to have each soil bed tested at least every few years, but Stevens says they tend to test much more frequently than that, especially for active fields with higher rotation. Primarily they are looking for the percentages of organic matter in their soil, which helps determine the amount of oxygen and water and nutrients the soil can hold.

After 37 years managing Golden Russet, Will and Judy have lifted their gaze to the transition of their beloved farm. Their daughter Pauline has thankfully committed to taking the reins. Pauline is in her fourth year of transitioning to become the owner of the land and business.

Over the years running Golden Russet, the Stevens have experimented and employed almost every farming method in the book (adhering to organic standards, of course). They’ve been dealt challenges and have learned lessons and have designed new management systems that increase their adaptability and resiliency in the face of unforeseen challenges.

“Part of what management of a farm involves is identifying what you have some control over and what you actually have no control over so you can still get things done and move through life,” Will said with a seasoned chuckle.