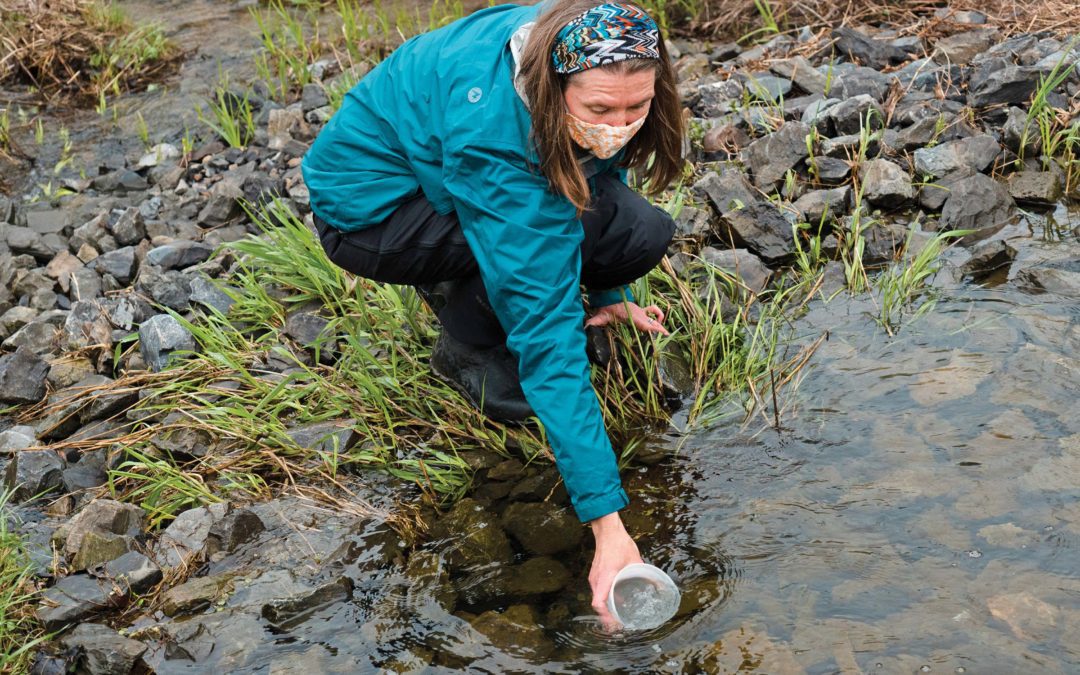 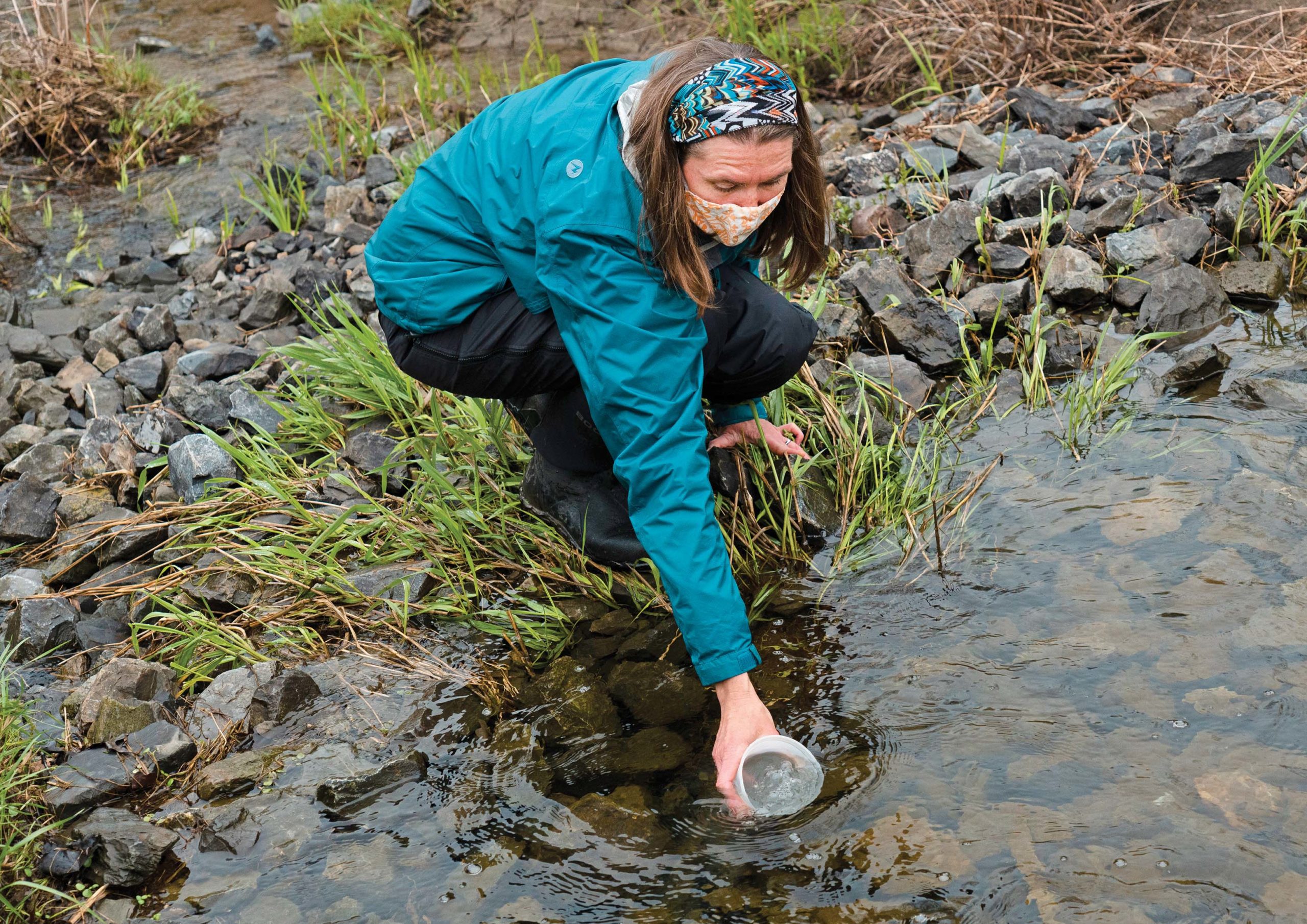 It’s not as robust as a lab sample, but we’re experimenting to see where we do want to do more robust sampling.
— Monica Przyperhart, Addison County River Watch Collaborative

MIDDLEBURY — Addison County River Watch Collaborative has begun its 2021 sampling season with a special project in Middlebury, in a watershed that includes Mary Hogan Elementary and Middlebury Union High School.
The small stream, which empties into Otter Creek and eventually into Lake Champlain, doesn’t usually appear on maps, but it’s known around these parts, at least unofficially, as “Barnes Brook.”
River Watch has been testing for water quality at eight sites in the Barnes Brook watershed, but its overall goal is more far-reaching.
“The main purpose of this project is to test new sampling protocols and understand how to use them,” said River Watch Technical Coordinator Monica Przyperhart. “We’re looking for sampling methods that don’t need as much funding.”
River Watch monitors and assesses the condition and uses of local rivers. As reported by the Independent last month, the group has had to make budgetary and project adjustments because the LaRosa Partnership — the division of the Vermont Department of Environmental Conservation that offers funding, coordination and lab services to water-monitoring organizations — was restructured in 2020 to increase efficiency.
With that in mind, the Barnes Brook sampling team, which includes Przyperhart, River Watch board member Chris Robbins and two volunteers, has been using simpler and less expensive sampling tools — turbidity tubes, phosphorus test strips and chloride test strips — to conduct a kind of pre-testing to determine which sites might warrant the expense of lab testing.

SHAKE IT UP
Turbidity is a measure of water’s cloudiness or murkiness, and it’s an important factor in water quality. One of the most common causes of turbidity is rainstorms, which increase the volume and flow of waterways, churning up streambeds and picking up additional sediment from riverbanks.

“Cloudiness is important to note because it keeps light from penetrating as far into the water, affecting photosynthesis,” Przyperhart said. “It’s also often associated with other contaminants such as algae and sediment indicating the presence of phosphorus or nitrogen.”
For simpler testing, Robbins and Richard Butz have created a “turbidity tube,” a long tube with a patterned disk at the bottom. If you can fill the tube with water and still see the disk at the bottom, the water has low turbidity. Conversely, cloudy water will obscure the view of the disk before the tube is filled.
“It’s not as robust as a lab sample, but we’re experimenting to see where we do want to do more robust sampling,” Przyperhart said.
So far, on the two days River Watch has conducted sampling, the water has been too clear to determine the effectiveness of the turbidity tubes, but the group plans to head back to the sites for stormwater sampling at least twice this spring, which will provide plenty of cloudy water.

DASH OF SALT
This is the first time River Watch has tested for chloride, which is one of the three nutrients (along with phosphorus and nitrogen) the LaRosa Partnership is keen to have citizen scientists sample for.
Chloride occurs naturally in rocks and soils, but at elevated concentrations it is toxic to freshwater plants, insects, fish and other organisms.
Excess chloride in waterways is often the result of road salt. According to a 2017 study of northern U.S. and Canadian lakes conducted by the Global Lake Ecological Observatory Network, roads located within 1,600 feet of a shoreline were strong predictors of increased chloride in lakes.
At the time of the report, Lake Champlain’s chloride levels did not pose an immediate risk to its various ecosystems, but researches noted that concentrations were steadily rising.
River Watch wasn’t sure if it would detect any chloride in the Barnes Brook watershed, but after two separate sampling days, “we are definitely finding (it) in decent concentrations — enough to warrant more robust sampling,” Przyperhart said. “It’s becoming clear that the chloride strips will be useful.”

THE BIG P
Phosphorus is a component of fertilizers, manure and sewage, among other things.
When too much of it gets into lakes and streams — for example, from soil erosion caused by storm runoff — it overfeeds plants while at the same time reducing dissolved oxygen in the water, which is critical to animals.
River Watch hopes to refine its phosphorus sampling site selection based on the results of low-cost phosphorus test strips.
The group’s two outings to Barnes Brook produced two distinctly different sets of results, so it’s not drawing any conclusions yet, but phosphorus was detected on both days, and “any detection of phosphorus in sizable quantities is data we didn’t have before,” Przyperhart said.
River Watch will likely gather more substantial data when it conducts stormwater testing later this spring.

TESTING THE TESTS
River Watch needs more time and data to properly evaluate the usefulness of these low-tech tools, but so far the results look promising, and ultimately the group is hoping the tools will increase water sampling around the county and decrease its overall cost.
“What if we can teach landowners with runoff issues to do this?” Przyperhart said. “What about just regular people?”
And what if they could get a snapshot of water quality right there on site? The tubes and strips may not be as sophisticated as laboratory methods, but they’re much faster
“The instant results are really gratifying for volunteers,” Przyperhart said.
For more information about the Addison County River Watch Collaborative, visit lewiscreek.org/acrwc.
Reach Christopher Ross at christopherr@addisonindependent.com.