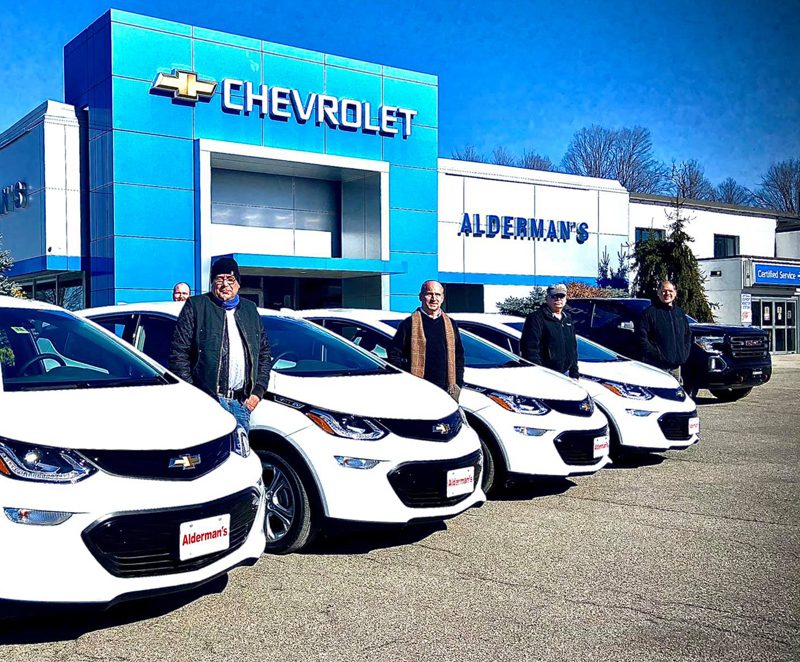 EMPLOYEES FROM NORTHEAST I.S. LLC stand with the fleet of four Chevy Bolt electric vehicles the New York company purchased from Alderman’s Chevrolet Buick GMC in Rutland in February. Alderman’s General Manager Mark Alderman committed to EVs early on, he said, and the dealer has now become one of the biggest sellers of Chevrolet EVs in the nation.
By Christopher Ross

“We’re noticing more demand for EVs as more and more people are talking about them … It’ll be interesting to see what happens.”
— Justin Stone, a third-generation member of the G. Stone team

RUTLAND / MIDDLEBURY — Mark Alderman believes we might be approaching a tipping point with electric vehicles (EVs).
“EVs will become more and more common until they’re normal, and then it’ll be the ICE (internal combustion engine) cars that stick out,” said Alderman, who is general manager of Alderman’s Chevrolet Buick GMC, one of the biggest sellers of Chevrolet EVs in New England.
EVs currently make up nearly 20% of new car sales at the Rutland dealership. But this didn’t happen by accident.
“At the foundation of all this is that I think EVs are cool,” Alderman said. “The technology is far superior to ICE vehicles, and they’re fun to drive.”
Alderman’s fascination with EVs began years ago with the Chevrolet Volt (with a V), a plug-in hybrid EV.
In 2017, when the all-electric Chevy Bolt (with a B) came out, Alderman did two things to tip the scales.
“The first thing I did was convert the whole loaner fleet — except for pickups and 6-passenger vehicles — to Bolts,” he said.
Second, he split up his 50 employees into groups of three and provided them with a Bolt “orientation.”
“I had each of them drive it and I talked them through the tech, the performance, the design differences,” he said. “Then I had each of them take out the charger and plug it into the wall so they’d know how to do it.”
These two investments have made all the difference, he said.
And customers who drive away in EV courtesy cars often end up falling in love with them.
It doesn’t hurt that Vermont state and Vermont utility incentive programs could potentially knock thousands of dollars off the sticker price. And Vermont’s build-out of EV charging stations is making it easier for prospective customers to make the transition to all-electric.
“Green Mountain Power and Vermont are doing a great job of expanding charging infrastructure,” Alderman said.
Add in a steady stream of new models and EV growth will be explosive, he said.

EV PICKUPS
The EV era will not be driven solely by sleek, zippy passenger cars like the Bolt, however. EV pickup trucks are not far off.
In January Car and Driver magazine pulled together updates on every electric pickup that’s currently on the horizon:
•  Ford F-150: expected to appear sometime in 2021, set to enter production in 2022.
•  GMC Hummer: arrives later this year in a $112,000 fully loaded Edition 1 model, with less extravagantly priced versions to follow in 2023.
•  Tesla Cybertruck: looks nothing like a pickup but its stainless-steel shell is supposedly dentproof, scratchproof and bulletproof.
•  Rivian R1T: by an American startup, scheduled to arrive in June, starting at $75,000.
•  Lordstown Endurance: full production starts in 2022, price starts at $52,500.
•  Bollinger B2: “should be a monster off-road” — if you can afford the $125,000 price tag.
And on April 6 General Motors confirmed it will build an electric version of the Chevy Silverado. Look for it in 2023 or 2024.

AMERICAN CLASSIC
The quintessential muscle car is also getting an EV makeover.
Ford is taking reservations for the Mustang Mach E. Delivery was originally scheduled for this past January, but it’s been delayed a couple of times.
G. Stone Ford in Middlebury has a model on its lot for prospective customers to check out and test drive.
“It’s sort of an SUV-Mustang concept,” said Sales and Leasing Consultant Justin Stone, a third-generation member of the G. Stone team.
The dealership has also been set up with an EV charging system and equipment needed to service EVs, Stone said.
“We’re noticing more demand for EVs as more and more people are talking about them,” he said. “Though many people are also seeking gas vehicles.”
The main obstacles to selling EVs at the moment are the battery range and the effects of cold weather, Stone explained. But he predicted that demand will increase once more vehicles go all-electric.
Super-duty vehicles will still be available in gas or diesel, he said.
“It’ll be interesting to see what happens.”

KICKING TIRES
Drive Electric Vermont (DEV), a partnership between the state and the Vermont Energy Investment Corporation, maintains an up-to-date list of EVs that are available in Vermont. Visit tinyurl.com/tyeu9k9v to see the latest models, along with photos, specs and available incentives.
DEV Coordinator Dave Roberts encourages people to visit dealerships and test drive the EVs they’re curious about.
“People often think they will be sacrificing something by driving an EV, but then they find that the performance is amazing, the cars are quiet and comfortable, and there’s no sacrifice at all,” Roberts told the Independent. “And once they transition to EV they say they will never go back.”
Reach Christopher Ross at christopherr@addisonindependent.com.