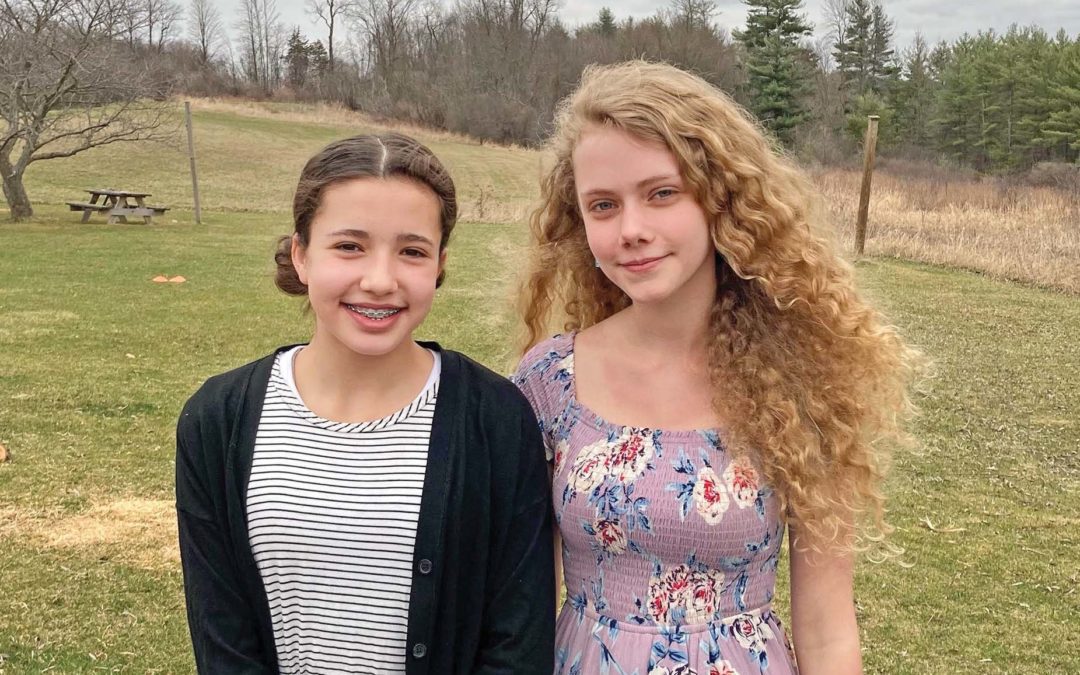 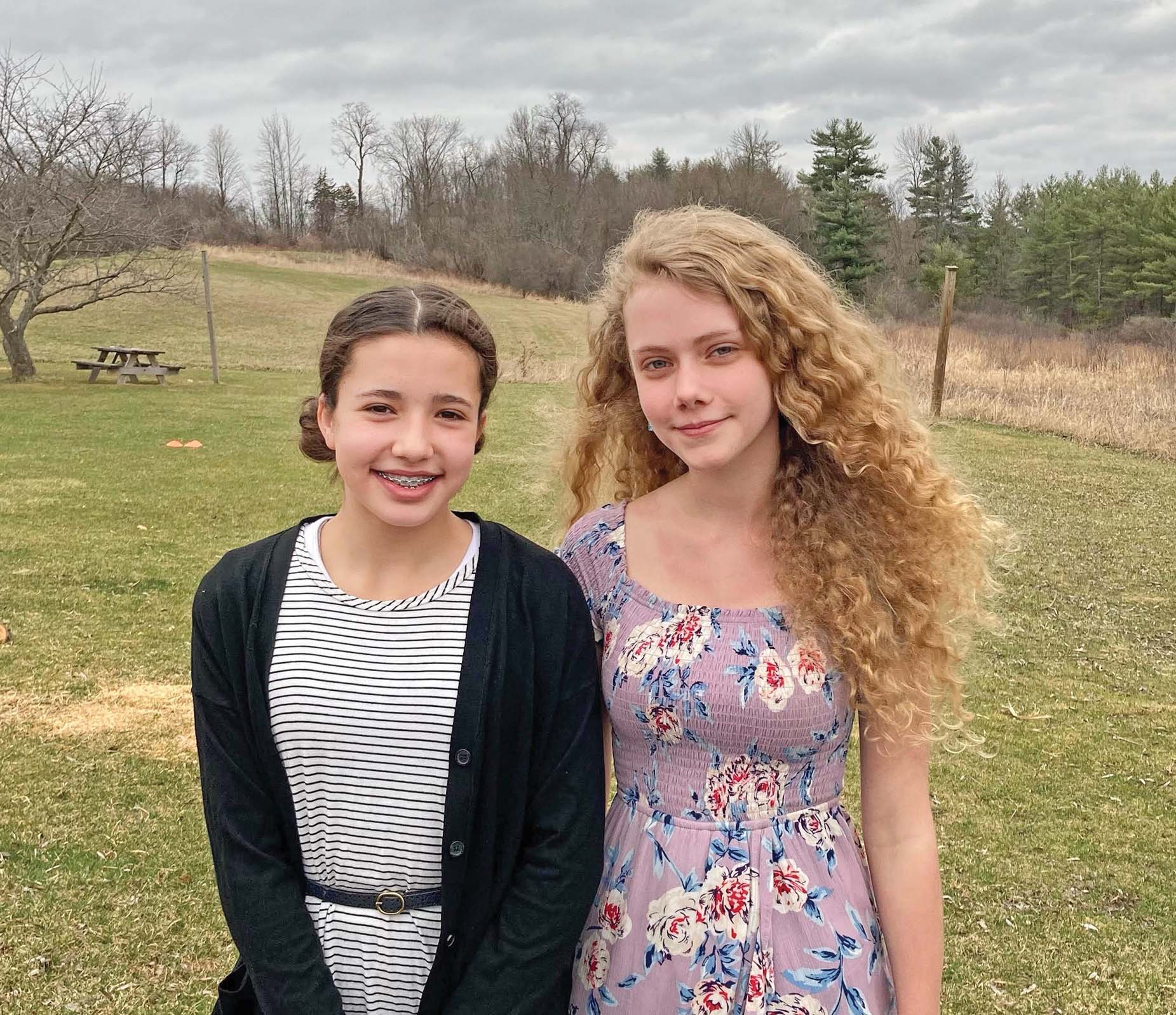 MOUNT ABE EIGHTH-GRADERS Hazel Guillmette, left, and Whitney Dykstra of Monkton were so affected by learning about the Holocaust — and so shocked to discover that Vermont students are not required to learn about this dark period of world history — that they embarked on a campaign to make Holocaust learning a part of the state curriculum.
By Christopher Ross

Hazel and Whitney’s petition and proposal comes at a crucial moment in our nation as we see the continued necessity of learning hard history, and not just learning about it but doing something about it.
— Mount Abe teacher Kelly Osborne

MONKTON — In January 1945, just months before the Buchenwald concentration camp was liberated by American forces, 16-year-old Jewish prisoner Elie Wiesel lay silently, fearfully in his bunk as his father was beaten to death in the bunk below.
Wiesel’s father was one of 6 million victims of the Holocaust, Nazi Germany’s attempt, from 1941 until it was stopped in 1945, to exterminate all of the Jews under its dominion.
Elie Wiesel remained silent about his experiences until the mid-1950s. Then the words started pouring out. He would go on to write 57 books, including “Night,” a landmark of what would come to be known as Holocaust literature. In 1986 he was awarded the Nobel Peace Prize.
“Because of his telling, many who did not believe have come to believe, and some who did not care have come to care,” wrote American theologian Robert McAfee Brown in his preface to the 25th-anniversary edition of “Night.” “He tells the story, out of infinite pain, partly to honor the dead, but also to warn the living … that it could happen again and that it must never happen again.”
That it could happen again has been very much on the minds of Mount Abraham Union Middle School eighth-graders Whitney Dykstra and Hazel Guillmette, who after a two-month unit on the Holocaust made some startling discoveries:
•  11% of American adults have never heard of the Holocaust, according to a 2018 survey by the Pew Research Center. For those born in the 1980s and ’90s, commonly known as “millennials,” that number climbs to 22%.
•  Only 16 states in the U.S. require Holocaust learning in all public schools.
•  Vermont is not one of them.
“That really surprised us,” Dykstra told the Independent.
And it motivated them to take action.
“From there we wanted our mission to be that everyone got the same chance as us to learn about the Holocaust,” Guillmette said.
For a class assignment requiring them to create a public service announcement (PSA), Dykstra and Guillmette produced a pamphlet advocating for mandatory Holocaust learning in Vermont and mailed it to the principals of 20 high schools around the state, including those in Middlebury and Vergennes, asking for their help.
Throughout the process, Guillmette and Dykstra have received support from the three Team Summit teachers, Karyn Norwood (Social Studies), Kelly Osborne (English) and Ryan Morra (Science), who co-created the interdisciplinary curriculum that included Holocaust learning and guided students through their PSAs.
“These girls are so impressive,” Norwood said. “And personally, as a historian, I am just so excited to see students get excited about learning about the past, and to understand how important it is. The lessons of the past are definitely relevant today.”
Osborne agreed.
“Hazel and Whitney’s petition and proposal comes at a crucial moment in our nation as we see the continued necessity of learning hard history, and not just learning about it but doing something about it,” she said.
Morra spoke to the students’ initiative.
“(The PSA) was part of our interdisciplinary unit on what it means to be an upstander, and they have certainly walked the talk,” he said.

PETITION
Guillmette and Dykstra have launched a petition asking for mandatory Holocaust education in all Vermont public secondary schools.
The petition can be found online at tinyurl.com/2wzac56b.
“We are passionate about making this change because we want every Vermont student to have access to this information and the important moral and life lessons this tragic history represents,” they wrote.
Their ultimate goal is for Gov. Phil Scott to sign a bill into law.
To that end, they’ve teamed up with the Vermont Holocaust Memorial (VTHM), a nonprofit organization that works to advance Holocaust education in Vermont.
VTHM was formed in 2017 by three second-generation Holocaust survivors (children of survivors), Deborah Steinerman, Miriam Rosenbloom and Marcie Scudder, who live in the Stowe area.
Rosenbloom, whose Dutch father was taken in by “Righteous Gentiles” who risked their lives to hide him, shared her story via Zoom with Dykstra and Guillmette’s class.
“It was an incredibly impactful and powerful experience,” the students wrote in the introduction to their petition. “Listening and being apart of this opportunity was life changing for us and we will forever carry the stories she shared in our hearts and souls.”
VTHM is excited to support the students’ petition, Steinerman told the Independent in an email.
“When they contacted VTHM with their petition we were just blown over,” she said. “It proves the impact and need for a Holocaust and genocide curriculum to be required in Vermont’s schools.”
The VTHM is in the early stages of reaching out to Vermont legislators about bringing a bill forward, she said.
Dykstra and Guillmette’s PSA cites a UNESCO (United Nations Educational, Scientific and Cultural Organization) article on why it’s important to teach people about the Holocaust:
•  It “demonstrates the dangers of prejudice, discrimination and dehumanization, be it the anti-Semitism that fueled the Holocaust or other forms of racism and intolerance.”
•  It “teaches about human possibilities in extreme and desperate situations, by considering the actions of perpetrators and victims as well as other people who, due to various motivations, may tolerate, ignore or act against hatred and violence. This can develop an awareness not only of how hate and violence take hold but also of the power of resistance, resilience and solidarity in local, national, and global contexts.”
Steinerman believes learning about the Holocaust is essential for young people today.
“Of the six million Jews that were killed, 1.5 million were children,” she pointed out. Each had a family, interests and a future. “We think that is an important fact to get across, especially to students.”
Dykstra and Guillmette’s petition has garnered well over 200 signatures so far, and the numbers are increasing every day, Steinerman said. “Many of those who have already signed offered to assist the effort with video testimony, comment, or other forms of support.”
Guillmette, Dykstra and some of their Team Summit classmates have written articles about their PSA projects for the latest edition of the “Bird’s Eye,” which readers can find tucked into the April 1 edition of the Independent.
Dykstra and Guillmette were praised for their writing during a recent meeting of the Vermont Principals’ Association, said Mount Abe Principal Shannon Warden.
“It is a proud moment for a principal to hear that our students are extending their learning beyond the unit requirements by applying said learning to benefit the greater good,” Warden said. “This level of advocacy demonstrates an application of not only content learning, but the transferable skills of communication, collaboration, personal development and self awareness, and global citizenship. I am excited to see the growth and accomplishments of these two outstanding students as they continue their educational journey at Mount Abraham.”
For more information about the Vermont Holocaust Memorial, including age-appropriate reading lists and lesson plans for teachers, visit holocaustmemorial-vt.org.
Reach Christopher Ross at christopherr@addisonindependent.com.