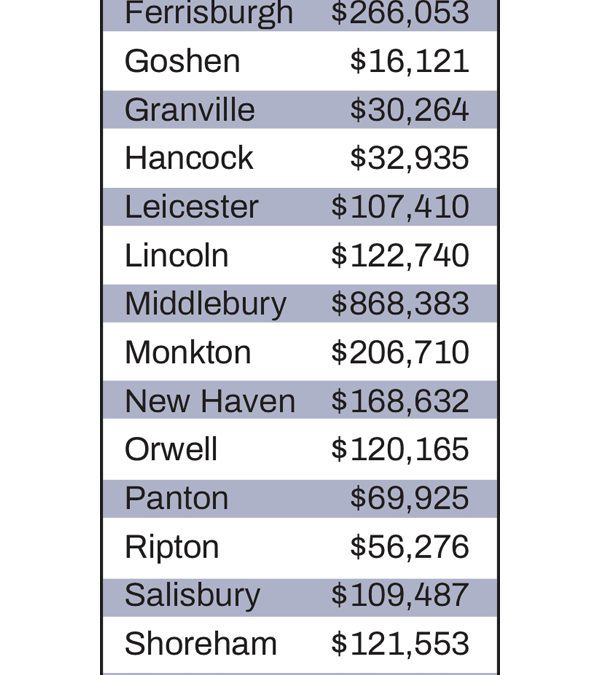 Note: This chart includes only the “non-entitlement municipality” allocations from the ARPA, not the additional allocation that Rep. Welch outlined for Vergennes in the accompanying story.

VERMONT — Congress has passed and the President on March 11 signed the next COVID relief legislation allocating $1.9 trillion for relief. The new law is known as the American Rescue Plan Act, or ARPA.
Vermont Congressman Peter Welch spoke to the Vergennes City Council on Tuesday about that city’s allocation.
Additional resources will come into Vermont through competitive programs, unemployment insurance benefits, and other means, but Vermont will directly receive an estimated $2.7 billion. See below for an outline of the legislation organized by where the dollars will go and what the funds are for.
Addison County Economic Development Corporation officials offered many thanks to the Vermont Congressional delegation for their work on this bill.
ARPA, FUNDS TO VERMONT THROUGH GOVERNMENT ENTITIES:
•  $1.052 billion to the State, most to be allocated by the Administration and General Assembly
•  $19 million to “Metro Areas” (Burlington)
•  $57 million to other “non-county” regions
•  $121 million to Counties (Since Vermont does not have county government, these funds will flow through the State)
•  $113 million to the State for capital projects
ARPA, BY USE OF FUNDS:
•  $1.35 billion from the Coronavirus Relief Fund (see above). Includes $113 million for infrastructures such as broadband and $197 million for Vermont municipalities.
•  $731 million in Direct Economic Impact Payments to Vermonters
•  $293 million for Vermont K-12 Schools
•  $152 million for Rental Assistance
•  $65 million for Vermont Colleges and Universities
•  $50 million for Homeowner Assistance
•  $47 million for Childcare Subsidies and Support for Childcare Providers
•  $27 million for Vaccine Distribution
•  $20.7 million for LIHEAP (Federal heating assistance)
•  $14.3 million in Public Transit Funds
•  $7.9 million for Burlington Airport and Vermont State-Owned Airports
The Act also includes $28.6 billion in direct relief for restaurants and an additional $1.25 billion for the shuttered venue program, nationally, administered by the USSBA.
The Act expands eligibility for the PPP and adds over $7 billion for the program. The Act did not extend the PPP beyond March 31, 2021, but Congressional sources report that there will be a follow-up bill to extend the Payroll Protection Program (PPP) beyond March 31.
Editor’s note: This story was provided by the Addison County Economic Development Corp.