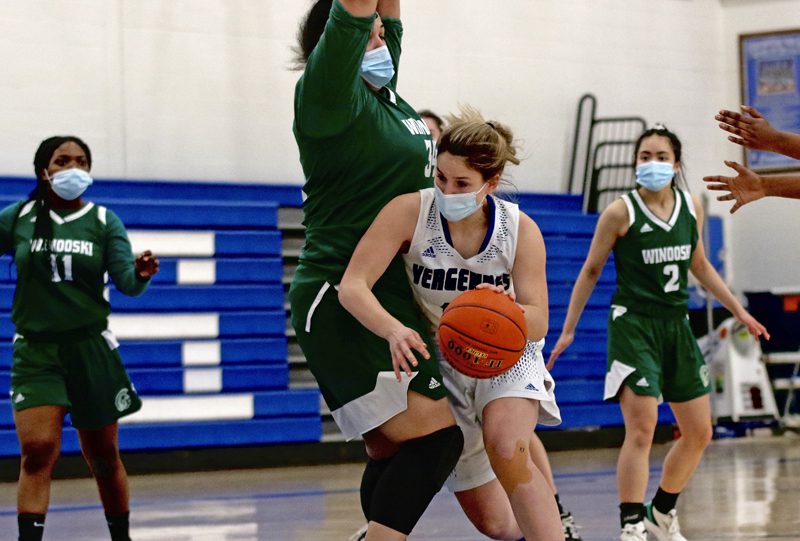 Vergennes senior guard Sydney Jewell, who had six rebounds and four assists, is dwarfed by Winooski forward Kiara Mack, as she moves the ball in the third quarter of the Commodores’ 50-28 win on Saturday.
By Andy Kirkaldy

VERGENNES — A Vergennes Union High School girls’ basketball team had not reached a playoff semifinal since 2008, and their last appearance in a final was 2006.
That year the Commodores defeated Mount St. Joseph in Barre for a second straight Division II championship.
On this past Saturday VUHS sailed past visiting No. 6 Winooski, 50-28, in a quarterfinal to check the reach-the-semi box.
On Tuesday the Commodores, seeded third in D-III, improved to 11-1 by knocking off No. 2 seed — and previously undefeated — Windsor, 38-31. The Commodores held the potent Yellow Jacket offense to 25 points fewer than in any other game this season.
And on this coming Saturday they will play in a final for the first time in 15 years, this time against top-seeded Lake Region (11-0). The game is scheduled for the Barre Auditorium at 5 p.m.
In the Commodores’ cruise through the playoffs — through the entire season, really — defense has been a constant. Coach Billy Waller typically plays all 11 of his athletes, and they put pressure on their opponents in the full-court and in half-court sets.
Only two teams, both Division I opponents, scored more that 40 points against VUHS this season, and Windsor’s 31 was a playoff high. Windsor had only once scored fewer than 60 points this season.
Waller discussed the Commodore defense after Saturday’s defeat of Winooski, a game in which VUHS took a 14-1 lead after the first period.
“We’re not going to give anybody anything going down the lane. If you’re going to score on us it’s going to be kick to the outside, where it’s going to be a little tougher angle,” Waller said. “We try to get in your face every shot that’s in front of us, and the girls have been doing this system for two years now. They understand it. They help each other.”
The Commodores opened their playoff run with a March 17 home win over No. 14 Randolph, 64-13. In that game they bolted to a 20-2 lead after the first period. Seniors Jordan Jewell (12 points) and Lauren Curtis (11) and junior Felicia Poirier (10) led a balanced attack.
In Saturday’s quarterfinal vs. Winooski the Commodores started slowly on the attack, but broke loose for 11 unanswered points in the quarter’s final 3:30, a streak sparked by nine combined points by Jewell and senior forward Kate Gosliga.
After that surge the Commodores fell out of rhythm as the second quarter opened, and four points from Winooski center Kiara Mack and a three-pointer from guard Lucy Surma helped bring Winooski back to within 16-7 with 3:05 to go before the half.
Again, VUHS finished the quarter strong. Poirier, who recorded 14 points, 10 boards, five steals and four assists, nailed a jumper; senior Sydney Jewell set up a Gosliga hoop inside; sophomore point guard Kyra Bradford hit a free throw; and Curtis capped an 8-0 run with a three-pointer to make it 24-9 and dampen the Spartan hopes.
The Spartans cut it to 26-14 in the third period, but Poirier defused the mini-rally by feeding senior forward Hannah Kelly for an uncontested layup and drilling a three.
Waller credited the defensive work of Curtis and senior guard Ema Gernander on Spartan point guard Sofia Bitukendja, as well as the work of Gosliga and Kelly checking Mack. Mack and freshman forward Jean Heintz led Winooski with seven points apiece, and Bitukendja scored five.
Nine Commodores scored vs. Winooski, and notable stats included Gosliga’s 10 points and seven boards, Kelly’s eight rebounds, Sydney’s Jewell’s six rebounds and four assists; and Kyra Bradford’s four points and four assists.
Windsor posed a greater challenge on Tuesday. The Jacks play a high-tempo, high-pressure style that required a delicate balance for the Commodores, who also like to run.
The Commodores did score in transition, but also were careful not to allow the Jacks to run. For example, when VUHS shot free throws Waller told the rest of the team to retreat past half court to prevent Windsor from triggering its transition attack from rebounds.
The Jacks led by 18-17 after a back-and-forth first half, but the Commodores took charge by outscoring the Jacks, 12-3, in the third quarter, blocking several shots, controlling the defensive boards, and forcing turnovers.
They stretched that lead to 32-22 with less than three minutes to go, but missed a chance to put Windsor away by missing a half-dozen free throws. Bradford, a point guard, also limped off the court after a collision, and her status could be questionable for Saturday.
A Windsor three at 2:06 cut the lead to 32-25, and another Jack three at 1:08 made it 32-28. A Windsor guard then stole the ball at midcourt and went in for a layup at 1:00, and suddenly it was a two-point game. Reese Perry scored 11 points and Ashley Grela eight to lead the Jacks.
Poirier restored order: She broke the team’s free-throw skid by sinking a pair at 0:55, and Gosliga followed with two more from the line at 0:29. Poirier iced the cake with two more free throws at 0:19, and the Commodore soon were celebrating the program’s first trip to a state final in a decade and a half.
As Gosliga said after the quarterfinal victory over Winooski, everyone in this group of Commodores is motivated.
“This is as far as we’ve gotten before in the playoffs,” Gosliga said. “It means a lot. We’ve been practicing as long as we could this year, and over the summer and everything. We all want this as much as everybody else, if not more.”