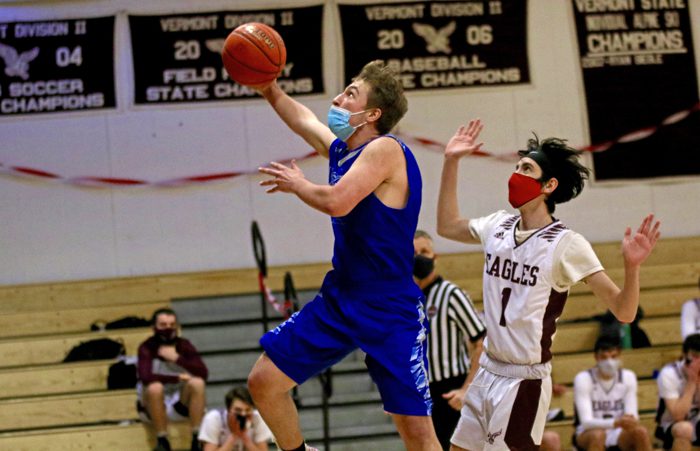 “I told them before the game this is a playoff game for us. It’s how we play today is how we will play coming into the playoffs. And I thought our guys stepped up. It was a good team effort.”
— Eagle Coach Josh Carter

BRISTOL — During Saturday afternoon’s rivalry basketball game at Mount Abraham Union High School both the Eagle boys and visiting Vergennes led by 10 points during regulation and by two points during overtime.
And the Eagles took a 60-59 lead with 10 seconds to go in OT when senior guard Miles Peterson swished an eight-foot floater in the lane.
But the Commodores had the final answer. They inbounded to freshman forward Tyler Bergmans, who sliced through the Eagle press on a coast-to-coast run and attacked the basket, drawing a foul with 4.3 seconds left.
Bergmans had already scored 22 points, six in OT, but had hit only two of four three throws in the extra session. Both teams had struggled from the line in a hard-fought game in which they combined to sink 31 of 52 free throws, about 60%.
Bergmans upped that percentage: He swished both, and the Commodores led, 61-60.
The Eagles called time, but had to go the length of the court. VUHS applied pressure. Senior Brett Sargent, whose two fourth-quarter three-pointers were critical for Mount Abe, had to launch from near half-court. It was a good effort, but his shot hit the back of the rim and bounced away. VUHS came away with the victory.
The Commodores won for the second straight time in overtime and third time in four tries and finished the regular season with a 3-4 record. That was good enough to earn them the No. 8 seed in Division III and a first-round playoff game vs. No. 9 Randolph (4-4) that will be played on Tuesday at 7 p.m.
Some perspective: The Commodores had not won a game since the 2018 season. Coach Josh Carter said he was proud of the way they responded on Saturday and down the stretch of this pandemic-shortened campaign.
“I told them before the game this is a playoff game for us. It’s how we play today is how we will play coming into the playoffs,” Carter said. “And I thought our guys stepped up. It was a good team effort.”
Eagle Coach Martin Clark praised VUHS, but had no quarrel with his team’s effort, especially after falling behind by 19-9 early in the second quarter and still trailing at the half, 28-23. The Eagles dominated the third quarter, digging in on defense and scoring the first 15 points before settling for a 38-32 lead after three periods.
“Give credit to Vergennes. They came out and played a great game,” Clark said. “They worked the ball and they got inside on us.”
The Commodores took a 15-9 lead after one period as Bergmans and junior guard Hayden Bowen scored four apiece. Each added hoops as VUHS pushed the lead to 10 as the second quarter opened.
The Commodore were dominating the boards behind Bergmans as both Eagle big men, seniors Koby LaRose and Quincy Cook, picked up two early fouls. Cook got into more foul trouble in the second half, Clark noted: “Foul trouble hurt us again. It hurt us early and hurt us late.”
Still, the Eagles cut the VUHS lead to five at the half as senior guard Henry Cogswell drilled three treys in the second period and senior forward Griffin Paradee chipped in two transition hoops and a free throw.
The Eagles then held VUHS scoreless for the first 7:30 of the third quarter by adjusting in their man defense and by deploying a 1-2-2 press.
“We were just in man trying to be in help position,” Clark said.
They also hit the boards harder with LaRose back in the lineup, shot better from the line (nine of 12 in the period), and got five points from Sargent and four from LaRose as the Eagles took a 38-28 lead.
But in the final 30 seconds VUHS junior guard Timothy Ashley nailed a three to break the ice, with an assist from senior Adam Sausville, and Bergmans drove to beat the buzzer, and the lead was down to five.
The teams traded points early in the fourth, and the Eagles led, 42-38, at 4:50, on a jumper from senior Lucas Jensen. Bergmans then sparked a 7-0 run with two free throws and assists on sophomore Abram Francis’ three and junior Alisdair Chauvin’s transition hoop, and Clark called for time with VUHS up, 45-42.
Vergennes offset Eagle buckets by Peterson and senior Grayson Lyons with a three by Ashley three and two Bergmans free throws at 0:36; that set the score at 50-46, VUHS.
LaRose then took over: He sank two free throws at 0:26 after an offensive board, and then stole the ball in the press and fed Paradee for a game-tying layup at 0:09. The Eagles held VUHS without a shot, and if was off to OT.
Five points from Cogswell were critical to keep the Eagles in the hunt, while Bowen (three) and Bergmans (eight) combined for all 11 of the VUHS points, with Bergmans’s nerveless free throws making the difference.
For the Eagles, Cogswell (16), Paradee (nine), LaRose and Sargent (eight apiece) and Peterson led the scoring.
Clark said he hoped the resiliency his team showed on Saturday can help in the playoffs. The 3-6 Eagles earned the No. 13 seed and will visit No. 4 Milton at 6 p.m. on Wednesday.
“We have to prepare to have a good game,” Clark said. “Anytime you’re in a competitive game like that, you hate to lose, but you do learn from that.”
For VUHS, after Bergmans’s 24, Francis scored 12; Bowen, 11; and Ashley, 10.
Carter praised the Eagles, particularly their effectiveness in the press.
“I thought that Mount Abe really brought it in the second half,” Carter said.
And he was pleased with the growing maturity and unselfishness of a Commodore team that plays only three seniors: center Tyler Jewett, guard Jake Russell and Sausville.
“The guys had a sense of calm in this overtime,” Carter said. “There was no pointing fingers. There was just, ‘All right, let’s go get it.’”